The organic food movement has been something of a phenomenon recently, and while some say that it’s utter rubbish and dismiss it as a fad, there are those enlightened individuals who understand its importance for personal health, as well as that of our environment. Unfortunately, for some restaurants the cost of going organic is too high, and they are not prepared to pay the necessary expense. The eternal question from naysayers is “Why is organic food so expensive?” Where, in fact, the question should be “Why is bad (referring here to genetically modified, pesticide-treated items) so cheap?”. That is where Little Saint starts by being different. Before even opening their doors, or making a single cent, they made the decision to use only free-range, organic and sustainable products. 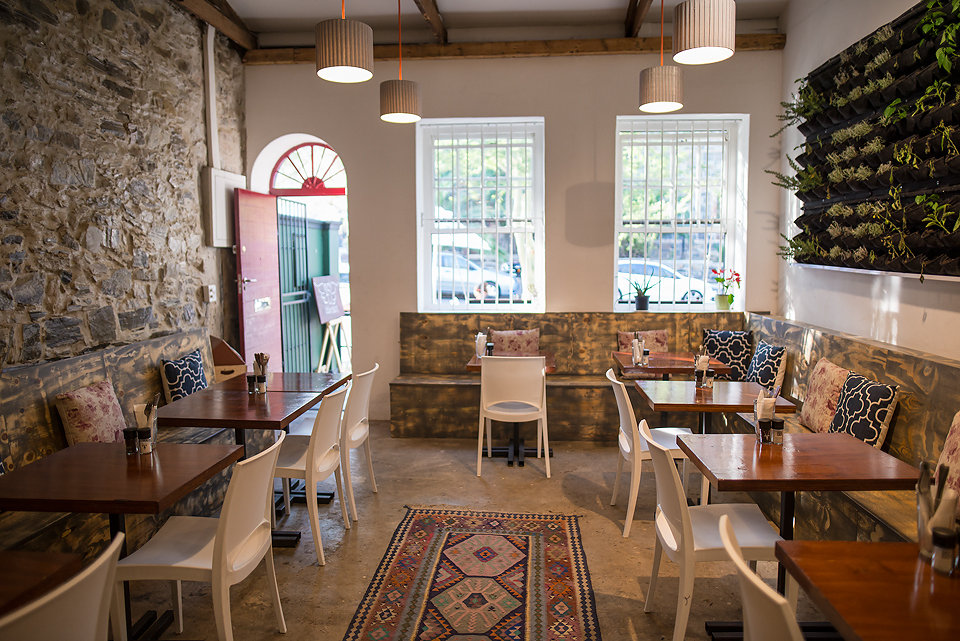 South African born Dominique moved to the UK when she was 18 years old and met Santiago Louzan Fidalgo, a Spaniard who was working in the Michelin-starred restaurant industry. Before long they were both working exceptionally hard and beginning to feel the strain that their lifestyle was having on their health. It hit them both that while they always made an effort to eat well, both being within the food industry, it inevitably came down to making a decision to look honestly and carefully at what they were eating. There had to be more to life than eating whatever was available in a supermarket. So, they eliminated refined sugar, reduced their intake of gluten and dairy and rid themselves of processed foods in general. Naturally the effect was instant, they were looking and feeling better. When people began taking notice and showing an interest in their changes, the idea to open a restaurant hit them. In the space of a year, they got married, moved countries and opened Little Saint. No small feat. When it came to deciding who they wanted to be as a restaurant, it was a balance between offering their own food and being restrictive. Some customers, even the ones who do their best to be healthy, will want a sneaky bit of sugar in their coffee. The idea of Little Saint is not to be restrictive, it’s about being healthy, ethical and eating as sustainably as possible.

So they threw themselves into finding the ideal suppliers, who were in line with their thinking. They also set the intention to find suppliers within the Western Cape, as even organic food can rack up the carbon emission miles if it’s coming from too far away. They looked to Ryan Boon in Paarl for free-range meat and Usana for their eggs, but most notably they joined up with Harvest of Hope for organic, seasonal produce. Harvest of Hope is a community based project where residents are encouraged and supported to grow their own organic vegetables, these veggies feed their families and the excess produce, of which there is a lot, is sold on to the rest of Cape Town allowing the gardeners to make an income for themselves. Not only is Little Saint making a pledge to serve the best quality food available but they’re also supporting an important community project. Sometimes, the bottom line is not all it comes down to. Dominique and Santi are also furthering the green feel of the restaurant with their 10 foot long living wall that houses their herbs, as well some lettuces. While they’re still experimenting with where to plant everything, it is fully self-irrigating and flourishes very happily. 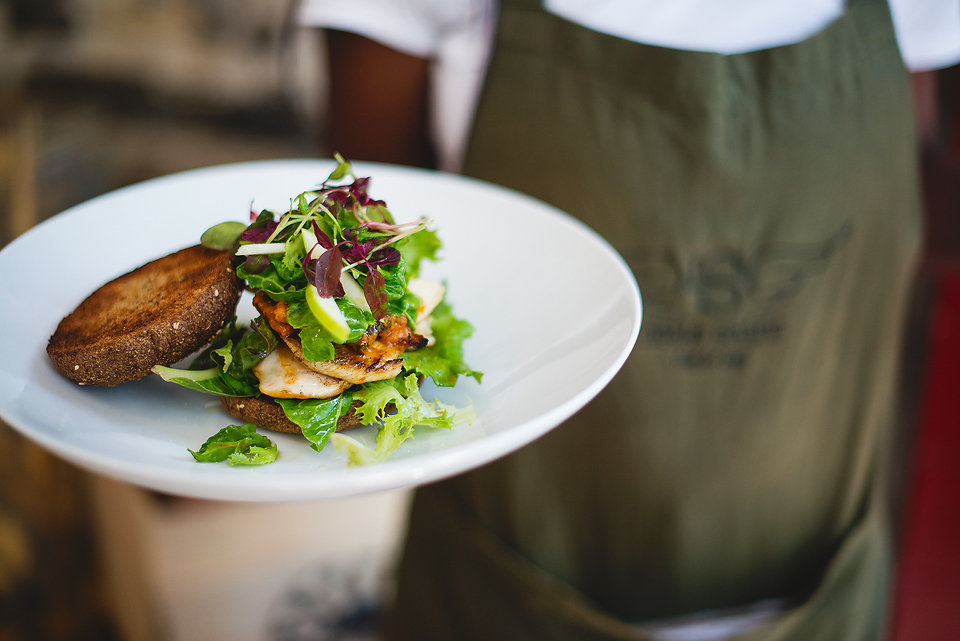 In terms of their menu and how they plan to use all these incredible raw materials, well that’s the easy part for veteran Santi. With his Spanish heritage and knowledge and understanding of the importance of using organic products, the fare is modern with a whisper of Spanish influences. Except for the Tortilla, for which they’re becoming known, that is very proudly a Spanish dish. If you’re unsure of what it is, it is not the flour-based wrap used for a burrito or taco, nor is it meant to be used interchangeably with a fritatta. A tortilla is a very traditional Spanish dish that is made with eggs and potatoes and is fried in olive oil. In short, it’s delicious and Santi has given it an update by making his with sweet potatoes. The rest of the menu features options like boiled eggs and soldiers (or troops as they’re referred to on the menu) for breakfast, salads and sandwiches option for lunch and their notorious triple cooked pork belly for dinner. Desserts are kept simple with poached pears, or even a simple cheeseboard to seal the meal. 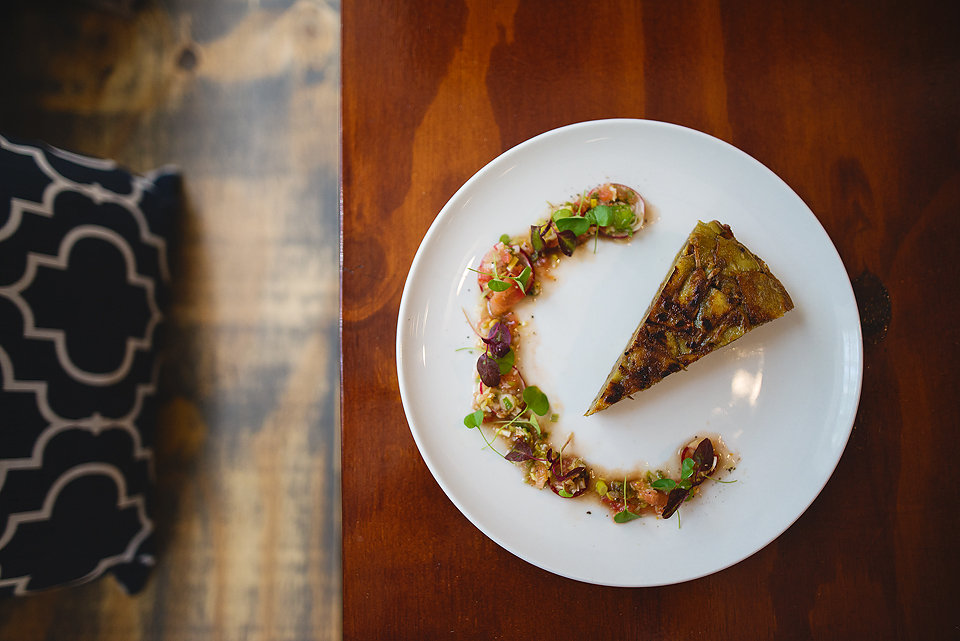 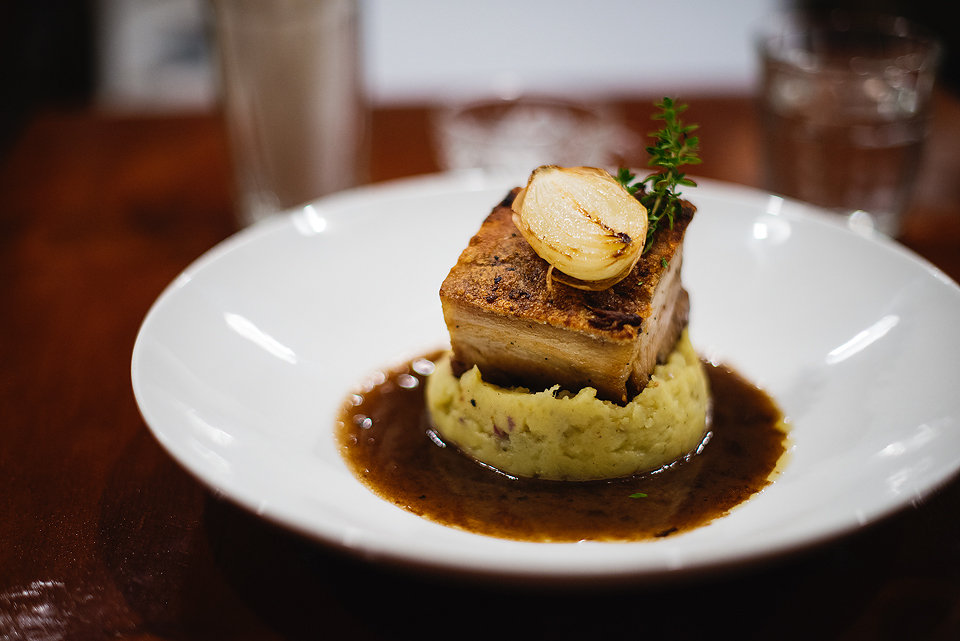 And so, while there may be more choice on Bree Street than one person can manage, bear Little Saint in mind the next time you’re around for a meal. It’s real food being done by people who really care about what they feed you, as well as the impact that their supplies can have on the environment. Their motto is food for living and they couldn’t be more true to that ethos, this is more than a plate of food. It’s a way of life.