Pasta must be one of the most versatile and popular food items around. While it doesn’t have a whole lot of flavour on its own, it’s the perfect carrier for all manner of sauces and is the base ingredient for some of the most popular dishes enjoyed worldwide every day. There is a theory that the Arab invasions of the 9th Century brought a dried noodle-like product, similar to pasta, to the southern parts of Italy. But as with the history of many food items, this is a popular topic for debate. It’s safe to say that the Italians have taken the idea and put their stamp on it, with hundreds of varieties and tasty resulting dishes. 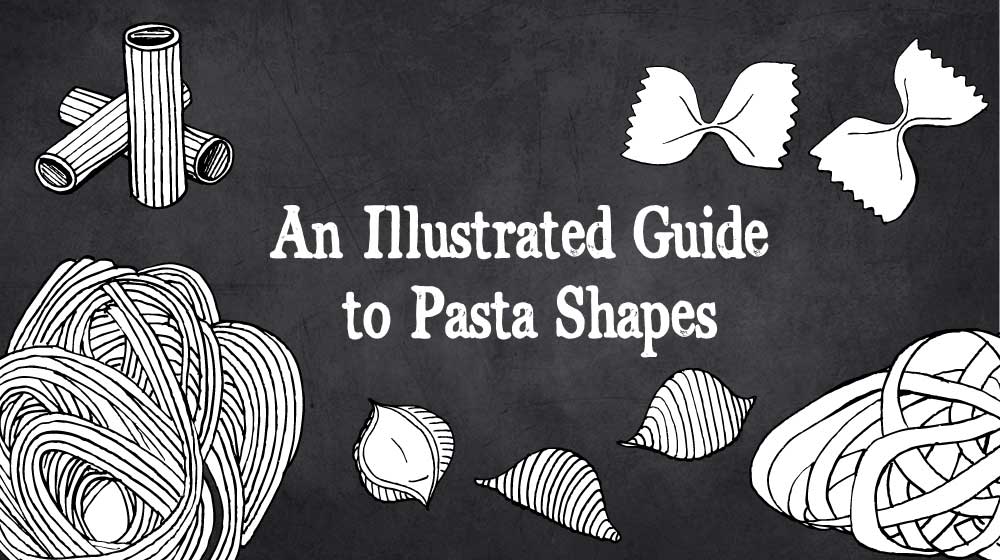 Pasta remains popular around the world because it’s easy to make, inexpensive and the store-bought version has a long shelf life. From the earliest days, until now, many different pasta types have emerged and it can be very tricky to identify one from the other. 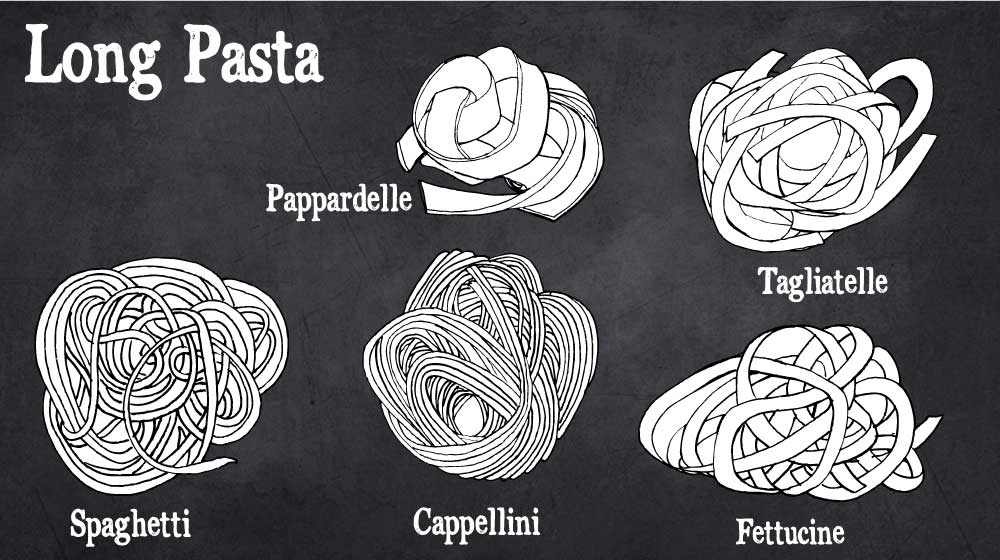 Ah, spaghetti, where would we be without this pantry staple? This long, cylindrical pasta is the base item for a traditional spag-bol — probably one of the most popular pasta dishes around. Immortalised in that famous scene from Lady and the Tramp, where a shared strand leads to a romantic kiss, possibly because the average length of spaghetti is around 25-30 cm. Classic first date material.

To cook the dried version, you’ll need to pop its full length into a pot of boiling water, let the submerged part cook until it’s soft enough to bend and allow the rest of it to fit into the pot. Whatever you do, don’t snap it in half. That is pasta sin. Ironically enough, spaghetti is not only a perfect match for Bolognaise but also light seafood sauces and cream or oil-based ones. We love this simple Spaghetti with Traditional Red Sauce.

Cappellini is spaghetti’s skinnier cousin, with a diameter between 0.85 mm and 0.92 mm. It is possible to get confused between Cappellini and spaghetti in pre-cooked form because of their similarities, but sometimes spaghetti can be slightly more rounded.

As if Cappellini is not skinny enough, you have another option to choose from – capelli d’angelo (angel hair). This even thinner variant of capellini has a diameter between 0.78 and 0.88 mm and is usually sold in a nest-like shape. This ethereal pasta is delicate and so goes best with other delicate sauces like pestos, light creamy sauces, tomatoes and seafood.

Tagliatelle is a flat, medium width noodle, about 6.5 mm to 10 mm wide. It is most commonly served with bolognese sauce. It’s slightly skinnier version is tagliolini which has a slightly more cylindrical shape. Tagliatelle lends itself to rich meaty sauces because the strands help catch all those tasty morsels. Try this killer Ragù Recipe with your tagliatelle, it’s a winner.

Fettucine is a flat, relatively wide noodle, but is wider than tagliatelle. It is best known enjoyed with a classic Alfredo sauce but actually works well with a beef or chicken ragù too. In fact, there’s very little that this hard-working pasta doesn’t go well with. If you come across a green version, it most likely includes spinach, for extra flavour. Try this Walnut and Spinach Pesto Fettuccine.

Pappardelle comes from the word ‘pappare’ which means to ‘gobble up’, which we totally get, as this wide flat pasta is perfect for big appetites. It also hails from the gorgeous Tuscan region in Italy where fresh ingredients are key.

It is a very broad and flat pasta and is roughly 2-3 cm wide, making it best for seriously creamy and meaty sauces. It may also have fluted edges, offering further grip for all that sauciness. Try out this Mushroom Ragù, a great veggie riff on the classic meaty one. 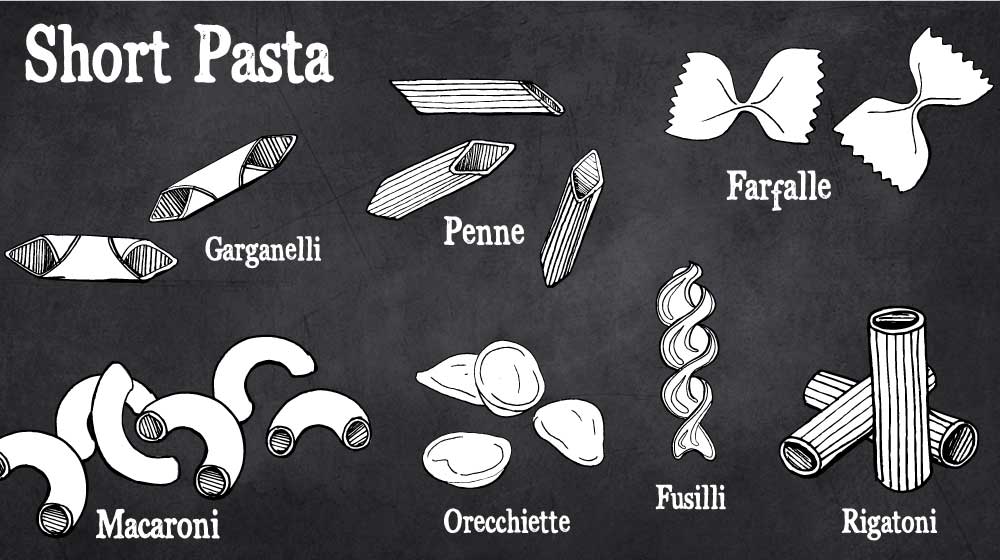 Who doesn’t love that old favourite ‘Mac and Cheese’? It’s probably one of the most popular forms of pasta and the dish has certainly become an American family classic. It is traditionally made from durum wheat, without eggs, and is shaped in short, hollow tubes cut in short lengths.

Elbow macaroni is cut in lengths with a curve, which is why it is the best with cheesy sauces because that little crook catches it all. Give this Mac and Cheese with Caramelised Leeks recipe a go, you won’t be sorry.

Probably one of the ‘prettier’ pastas, this butterfly or bow-shaped pasta gets its name from the Italian word ‘farfalla’ meaning butterfly. Farfalle are formed from a rectangle or oval piece of pasta – the centre is pinched together to give it that pretty shape.

Because one version is never enough, there are also farfallone – the larger variation of farfalle, and farfalline – the miniature version of farfalle. Whichever size you go with, know that you can pretty much pair farfalle with any sauce. Try this recipe for Green Olive, Caper and Herb Pasta with Crunchy Pangrattato.

Another popular shape of pasta due to its cylindrical centre that picks up and hold sauces really well. It’s great with a rich marinara or a spicy arrabbiata sauce. It’s name is derived from the Italian word, penna, which means feather or quill. You can choose from two variants of penne – penne lisce (smooth) and penne rigate (furrowed). You can’t go wrong with this Pea, Crispy Bacon and Feta Penne recipe.

Rigatoni is a slightly shorter and stouter version of penne, sometimes with a slight curve. The name comes from the Italian word, rigato which means ‘ridged’ or ‘lined’, as the pasta has a ridged outer side. The ridged sides of rigatoni make it great for holding onto a cheesy sauce.

Fusilli is a corkscrew-shaped pasta and derives its name from the Italian for ‘little spindle’. Fusilli are popular to use in pasta salads and the tricolour version of red, white and green represent the Italian flag. The curves and chutes it makes is best with a chunkier sauce, something like a pesto works wonderfully. This bold Herby and Olive Sauce goes wonderfully with it too.

Garganelli can be smooth or ridged. This egg-based pasta resembles a small, ridged, rolled tube, almost cigar-like in its shape. Garganelli resembles penne, but the difference is in the making of it. While penne is made as a hollow cylinder, garganelli is rolled from a square piece of pasta; the square folds over visibly, giving garganelli its signature look. Being quite a stable pasta, this too holds up well a hearty meat ragú. See our recipe for a hearty Garganelli Arrabiata.

Orecchiette means ‘little ears’ in Italian, but don’t worry, no body parts are used in the making of these! This is an eggless pasta and getting the right shapes takes some real skill – probably best learnt in a hands-on lesson with a real Italian nonna. The shape is almost cup-like which captures sauce really well. The shape is also perfect for scooping up small vegetables, making orecchiette an ideal partner for sautés and braises. See our recipe for Bacon and Broccoli Orecchiette. 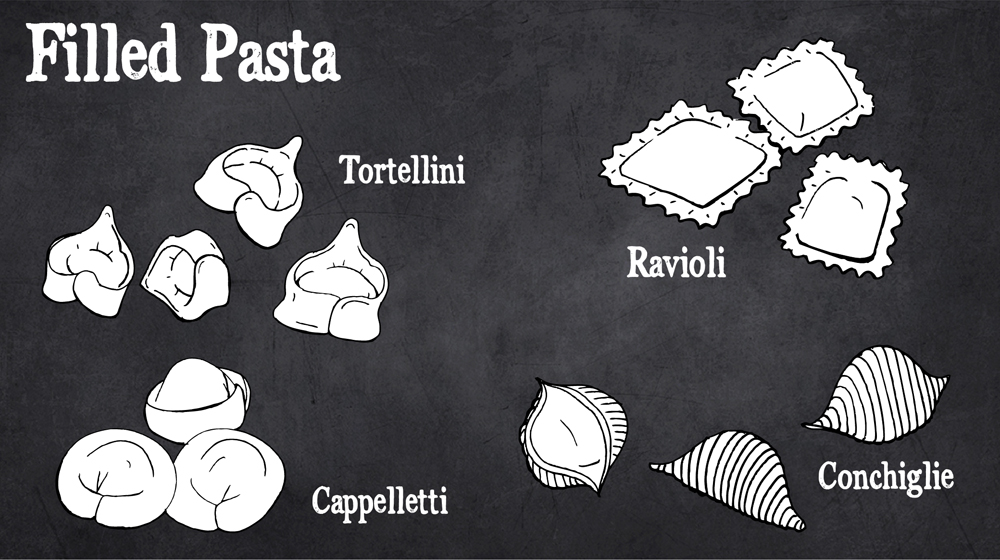 Ravioli are a type of ‘pasta dumpling’ with a filling sealed between two layers of thin, egg-based pasta dough. Ravioli can be served in either a broth or with a delicious sauce. Ravioli are often square or round, though other shapes are not uncommon.

The earliest known mention of ravioli is in the 14th century by Francesco Datini, a merchant of Prato, so these popular pockets of deliciousness have really stood the test of time. Try our delicious Beef Ravioli.

Conchiglie is perfect for a seaside pasta salad on a hot summer’s day. It looks very similar to a conch shell and this is exactly where the inspiration for the name came from — conchiglia, Italian for ‘shell’.

The shell shape works like a little scoop, so is perfect for meat sauces or a mayo or vinaigrette based dressing. Conchiglie come in a large size that can be stuffed or a smaller version, conchigliette, ideal for salads.

Tortellini are filled, ring-shaped pasta, which look a bit like a navel. They are folded over in the shape of little turnovers, and then stretched around so the ends overlap and stick together. Tortellini is normally served in a meat broth, using either beef or chicken, it’s can also be stuffed with a mix of meat or cheese. Try your hand at our Oxtail Tortellini.

The word cappelletto means, ‘little hat’, and that is exactly what cappelletti looks like. This egg-based pasta is pretty similar to tortellini, in that they are filled and traditionally served in a broth. The real difference comes in in the shape and the way they are folded. Try your hand at this recipe Roast Chicken Cappelletti served with Chicken Broth.

If you’re familiar with Garfield, then you’ll know all about lasagna. A dish of lasagne is made up of several flat sheets of pasta, usually combined with minced beef or vegetables. It is possibly one of the oldest types of pasta in existence and is typically made of durum wheat. Dried lasagne comes in wide sheets that are used to layer alternately with a meat sauce and béchamel sauce, a classic hearty dinner. We love this vegetarian take on the classic dish Zucchini and Ricotta Lasagne.

Cannelloni is an old Italian favourite — a large cylindrical pasta, usually filled with spinach and ricotta or minced beef, topped with a sauce and cheese, then baked in the oven. Because of the size of cannelloni, it is sometimes blanched or pre-cooked slightly to ensure that it cooks all the way through when baking. Try this Spinach, Mushroom and Ricotta Cannelloni. 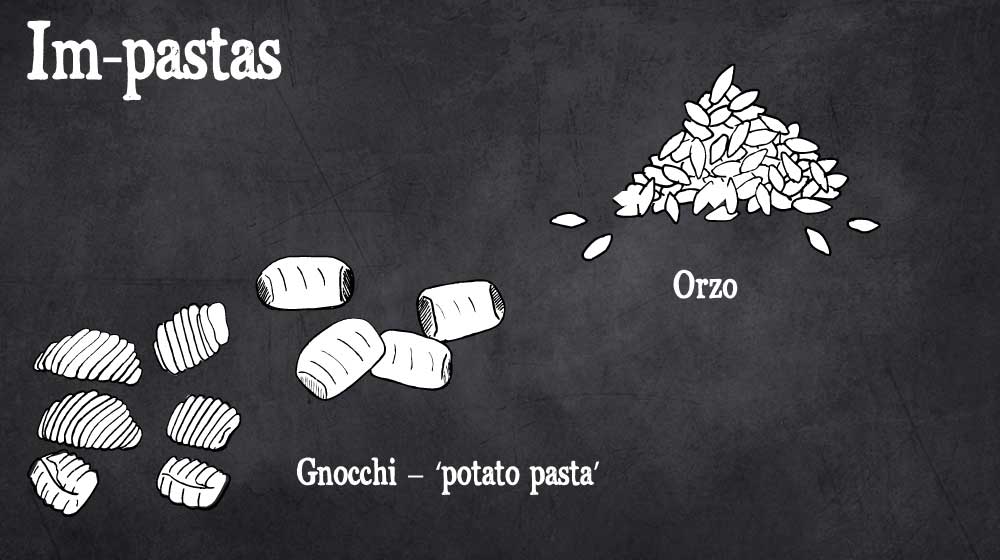 While not traditionally a pasta, gnocchi are often put in the same category because of their similarity to the real deal. They are also seriously delicious so we simply had to include. Gnocchi literally means ‘lumps’ in Italian, and while that may not sound particularly appetising right off the bat — don’t be fooled. When done right, these little dumplings, which are made from a combination of potato and flour, are heavenly, fluffy pillows.

The tastiest gnocchi are prepared with starchy potatoes, which give a light texture. Gnocchi can be boiled, baked, or sautéed and can be served in a tomato, pesto, cheese, or butter-based sauce. We love this recipe for Gnocchi in a Creamy Basil Pesto Sauce.

The word orzo actually means ‘barley’. This pasta is a little like rice on steroids because of its similar look, but significantly bigger shape. If you don’t like rice, don’t despair, orzo is a great alternative. Serve in a soup, as part of a salad, or as a rice alternative in a dish like pilau or even risotto, like this Mushroom Orzotto. We also love this Mediterranean Orzo with Chicken Thighs.

Inspired? Check out our tips for making your own fresh pasta here and see what equipment you need to make fresh pasta at home.