Surface Light is Peter Eastman’s second solo exhibition with SMAC Gallery and consists of two contrasting bodies of work; the ‘shadow paintings’ which have evolved over many years and his most recent ‘chine paintings’, which first came to be in the months preceding his Deep Chine exhibition at SMAC in Cape Town in June 2014. The ‘shadow paintings’ originally consisted of the drastically distorted and attenuated shadows cast by human figures, silhouetted against boldly coloured grounds. Gradually the content changed into highly stylized views of streets that are simultaneously flattened and rendered in dramatic forced perspectives. There is an edge to the ‘shadow paintings’, a metropolitan snarl and aggression. These jagged, angular compositions consist of a few diagonal lines that surge into the picture space conveying the pent-up energy, speed and momentum of contemporary urban life. Harsh contrasts of colour – often a gleaming lacquer black on strident street-sign yellow – too suggest the edgy tensions of Cape Town’s street life.

Each work functions as a double image. Before he starts painting the aluminium base, Eastman uses resin to create a disrupted surface of ridges and furrows. He then envelops this in up to six layers of lustrous enamel paint. The low relief surface and mirror-like sheen ensure that not only do the patterns of light and shade mutate constantly as the viewer moves around the painting, but he also sees his own reflection and movements, superimposed upon the painted streetscape, thus shifting focus between the depicted urban scene and the shadows hovering over it. In this way, the artist creates a dynamic interplay between the painted and reflected images, which perpetually reconfigure themselves in response to what takes place in front of the work.

The ‘chine’ imagery, by contrast, is emollient and meditative, celebrating the woodsy beauty of Deep Chine, the Eastman family retreat, an Eden of tranquillity with its river, pools, and tall crumbling sandstone cliffs which cause much of the forest to tumble and fall. The ‘chine paintings’ derive from photographic sources from which the artist desaturates the colours, heightens the contrasts and eliminates the intermediate tones. The palette is reduced to two colours, one dark, evoking shade; and one light, picking out the sunshine playing on the verdure, branches, rocks and water. 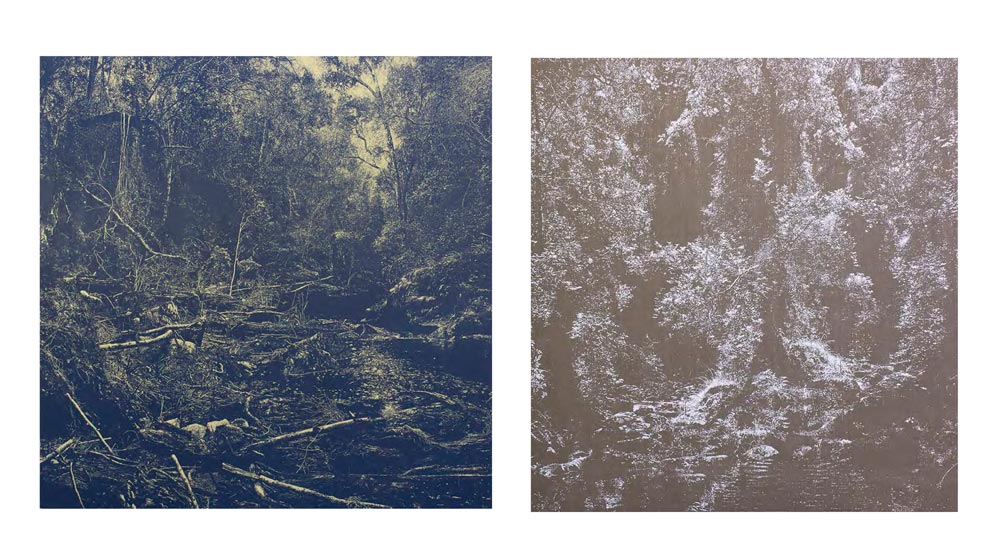 These paintings contain a fortuitous resemblance to Jules Olitski (1922 – 2007), the American colour field painter, who sprayed canvases with minuscule droplets of luscious colour that seemed to miraculously remain suspended in the air. The sparseness, asymmetry and prominent voids, as well as the exquisite delicacy of his work, also suggest an influence derived from the Japanese artefacts which surrounded Eastman in his home growing up. The painting titled Deep Chine: White Light is executed in such anti-naturalistic whites and burnished old gold as to deny the image’s source in landscape, and give it the flat appearance of some supremely elegant abstract Japanese objet de vertu. When viewed close up, such lyrical evocations of this idyllic retreat look like a cascade of white confetti swirling over the mustardy golden ground in a flurry of free-standing miniature strokes. Spatial magic makes the paintings continually metamorphose. At first sight only flat screens of abstract mark-making appear, but then on closer inspection, the design asserts depth and recession. Details emerge; a brook-side dell appears where successive layers of paint soften and smooth the moulded resin down into watery ripples, eddies and swirls. Shifting one’s gaze towards the voids, suddenly the woodland scene dissolves into abstraction once more. Representation and space are pitted against abstraction and flatness, and the painting constantly oscillates between the two.

The writer Gertrude Stein’s (1874-1946) injunction to the artist was to ‘make it new’, and Eastman accomplishes this feat, investing his decidedly original technical innovations with the purely painterly seductions of the brushstroke, as distinctively his own as his fingerprint.

Born in 1976 in Newcastle, UK, Peter Eastman currently lives and works in Cape Town. In 2003 he was selected as a finalist for the ABSA L’Atelier award and showed in the 2005 Sasol New signatures exhibition. Eastman has also participated in numerous local and international group shows and art fairs including the Realisme Art Fair in Amsterdam (2007), VOLTA5 in Basel (2009) and Africa, Assume Art Position! in Milan (2010). SMAC Gallery featured Eastman’s work in two review exhibitions; PAINT I, Contemporary South African Painting 2002-2012 (2012) and BACK TO THE FUTURE. Abstract Art in South Africa: Past and Present (2013). Surface Light will be the artist’s seventh solo exhibition since the start of his career in 2001 and follows on from the success of his Deep Chine exhibition presented at SMAC Gallery in 2014.  Eastman’s work is currently on view at the Art Center Hugo Voeten in Belgium​ as part of the Voeten permanent collection.

All images courtesy of www.smacgallery.com