Even for the most gifted baker, there are terms in a recipe that make you stop and say “huh?”. We know the feeling. Never feel out of your depth again with our extensive glossary of baking terms, so you know your creaming from your coating and your glazing from your greasing. 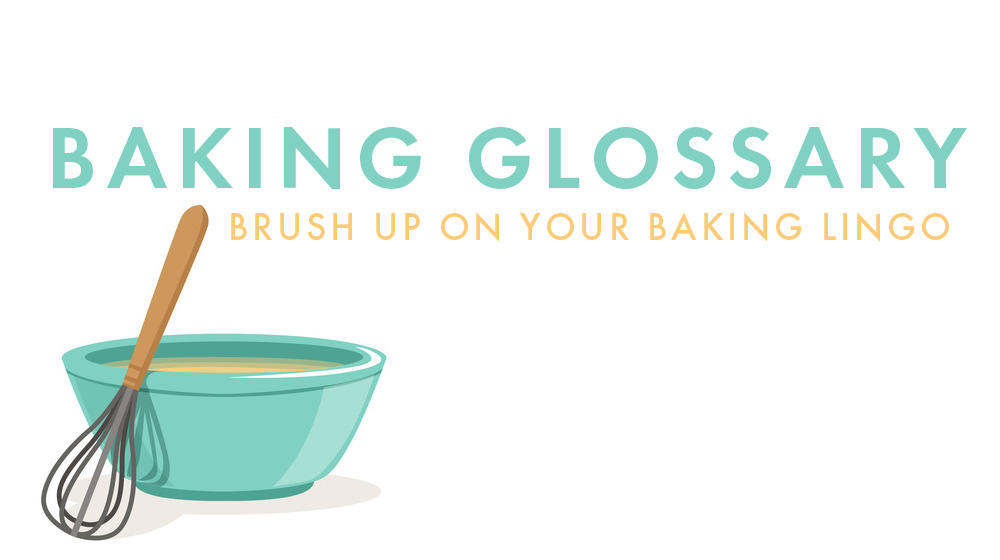 To whip, sift or beat air between particles, as with flour, confectioners sugar, or sugar and butter.

This is the French term for a water bath. A water bath protects delicate desserts, such as a set custard or a cheesecake, from curdling, cracking or over-cooking as they bake. The baking tin containing the mixture is set inside a larger pan that holds a shallow amount of hot water – this provides insulation against high heat.

Refers to the number 13. Believed to have originated as a way for bakers to avoid being blamed for shortchanging their customers.

A raising agent that reacts in the presence of moisture and heat to produce carbon dioxide (CO2) which allows cakes and other baked goods to rise.

Also referred to as baking soda, it reacts in baking as a raising agent. Bicarb is alkaline and needs the acidity from other ingredients to react and release CO2.

A technique used for baking an unfilled pastry shell. Before baking with the filling, the shell is lined with parchment paper and filled with ceramic beads, dry rice, or dry beans, and then baked briefly until the pastry is set.

Blooming gelatine is a step integral to ensuring the smooth texture of a finished product. It involves sprinkling the powdered gelatine into a liquid and letting it sit for 3 to 5 minutes. Leaf gelatine must be softened in cold water for a few minutes before being used.  To bloom agar agar it must be soaked in cold water but, unlike gelatine, it must be boiled for 5 minutes to activate.

To heat food until the sugars on the surface break down and form a brown coating, which may be sweet or savoury.

When a liquid, usually a custard, is thick and viscous enough to coat a spoon and doesn’t drain off.

Another name for icing or powdered sugar. The finest version of sugar which is a powder form. A small amount of corn flour is added to prevent clumping.

To beat ingredients to incorporate air and make the mixture creamy in consistency.

Used to stabilise beaten egg whites and used as a raising agent in some baked goods.

Curdling is when a mixture separates into its component parts. This can happen with eggs if they are added to a mixture too quickly or if the mixture is too hot.

To sprinkle lightly with a powder such as icing sugar or cocoa.

To coat an ingredient with a dry ingredient, such as flour or powdered sugar, either before or after cooking.

To mix two things together using a gentle lifting and turning motion rather than stirring so as not to lose any trapped air bubbles. Used for cake mixtures and when adding flavourings to meringues.

A coating that is applied to a pre-cooked or cooked surface to make it shine or to help it colour when cooked, such as an egg wash for uncooked pastry and an apricot glaze for fruit tarts.

To coat a dish, tin or mould with cooking fat in order to stop the item being cooked from sticking.

Hard ball stage occurs at 121-131 ºC . This stage can be determined by dropping a spoonful of hot syrup into a bowl of cold water. In the water, use your fingers to gather the cooled syrup into a ball. This stage is required for nougat.

At this stage syrup dropped into ice water separates into hard, brittle threads that break when bent. The temperature will be 148-154 ºC and this stage is used for most candies such as lollipops and brittles.

To mix a stiff dough by manipulating it by hand or with a mechanical dough hook in order to make it smooth. In bread –making, this also helps develop the gluten.

To allow a yeasted dough to rise. When you’re done going through this Glossary of Baking Terms, check out our article on yeasts.

The mixture is thick enough to leave a letter ‘O’ drawn on the surface for 10 secs when the whisk is lifted.

To integrate hard fat into flour by rubbing the two together with your fingertips until the mixture resembles breadcrumbs.

To pour over or immerse in boiling water for a short time in order to cook only the outer layer. Also, to bring milk almost to the boil, or to sterilise kitchen equipment with boiling water.

To move a dry ingredient such as flour, sugar or cocoa through a sieve (sifter) to incorporate air and remove lumps or unevenly sized particles.

To mix a powder, such as cornflour, with a little liquid to form a paste in order for it then to be mixed into a larger amount of liquid without forming lumps.

A term referring to a mixture of flour and water, which is stirred into soups and sauces as a thickener.

To infuse or impart with flavour eg: steep Earl Grey tea bags in milk to impart the flavour.

A term in sugarcraft and confectionary. A small amount of syrup is dropped into cold water and forms a soft, flexible ball, but flattens like a pancake after a few moments in your hand. The temperature on a thermometer would be 118-120 ºC. This stage is used for fudge mostly.

When egg whites or cream are beaten until thick and hold some shape but the peaks flop over softly when the whisk is removed.

When the sugar temperature reaches 132-144 ºC, the syrup will form hard threads that are still pliable and will bend before they break. Mostly used for butterscotches and taffy.

When egg whites or cream are beaten until they form physical stiff peaks that hold their point after the whisk is removed.

The process that takes chocolate through a temperature curve, which aligns the chocolate’s crystals to make it smooth, silky and creates a satisfying snap when you bite into it.

Temper can also refer to the process where a small quantity of a hot liquid is incorporated into cold liquid to warm the cold liquid slightly.

A whisk is a bulbous shaped beater that allows you to whisk an ingredient, this form of mixing incorporates a lot of air into a mixture or batter. A whisk or whisking action would be used in a recipe such as meringue where you would change raw liquid egg whites into a light, foamy and stable mixture.

The outer layer of citrus fruit, which is coloured and contains the essential oils. In baking zest is used to add flavour without necessarily adding liquid to a recipe; the essential oils hold powerful aroma and flavour properties.

Now that you have a glossary of baking terms to refer to, check out our recipe section and get baking!