Peter Tempelhoff has been a pioneer of the culinary industry in South Africa. His list of achievements is long and his career has put him in some of the best kitchens both locally and abroad. He is one of a small group of people in South Africa that can be credited with bringing the concept of fine dining to the fore for local foodies.

Currently, Peter is the Executive Chef for The Collection by Liz McGrath, which comprises a trio of 5-star Relais and Châteaux hotels (The Marine, The Cellars Hohenort Hotel and The Plettenberg). Across the three properties are four restaurants in total, one of which is Greenhouse, which has regularly featured on South Africa’s Top 10 restaurant list.

Chef Peter cites a 7-course dinner, prepared by Raymond Blanc at The Grande Roche Hotel in Paarl in 1996, as the food moment that made him want to become a chef saying,

“Each dish that Raymond cooked was beyond superb – beautifully created, simple and balanced; I told myself that I would cook like him one day. There have been other great meals along the way, but none could come close to the meal that affirmed my decision to become a chef. It was the meal of a lifetime!”

Twenty years on from that experience Peter has achieved exactly that and does not look set to stop anytime soon. We chatted to him after a recent visit to Greenhouse to find out more about his inspiration for the menu and how he manages such a big team across four restaurants.

You are Executive Chef for The Collection by Liz McGrath, which involves overseeing a number of restaurants in the group – how do you manage this and how do you ensure that your vision is delivered without you being in the kitchen at each place?

It’s simple… I surround myself with the best people money can buy, teach them all that I know (while learning from them), give them the freedom to express themselves, then reward them for their good work or help them to learn from their mistakes. If you give the team the tools and the trust to do the work (plus look after them) they will stick with you and reward you with good work. However, the glue that keeps all of this together is growth and knowledge – if people are learning and bettering themselves they will be happy! (Pictured below is Peter Tempelhoff with Head Chef of Greenhouse, Ashley Moss) 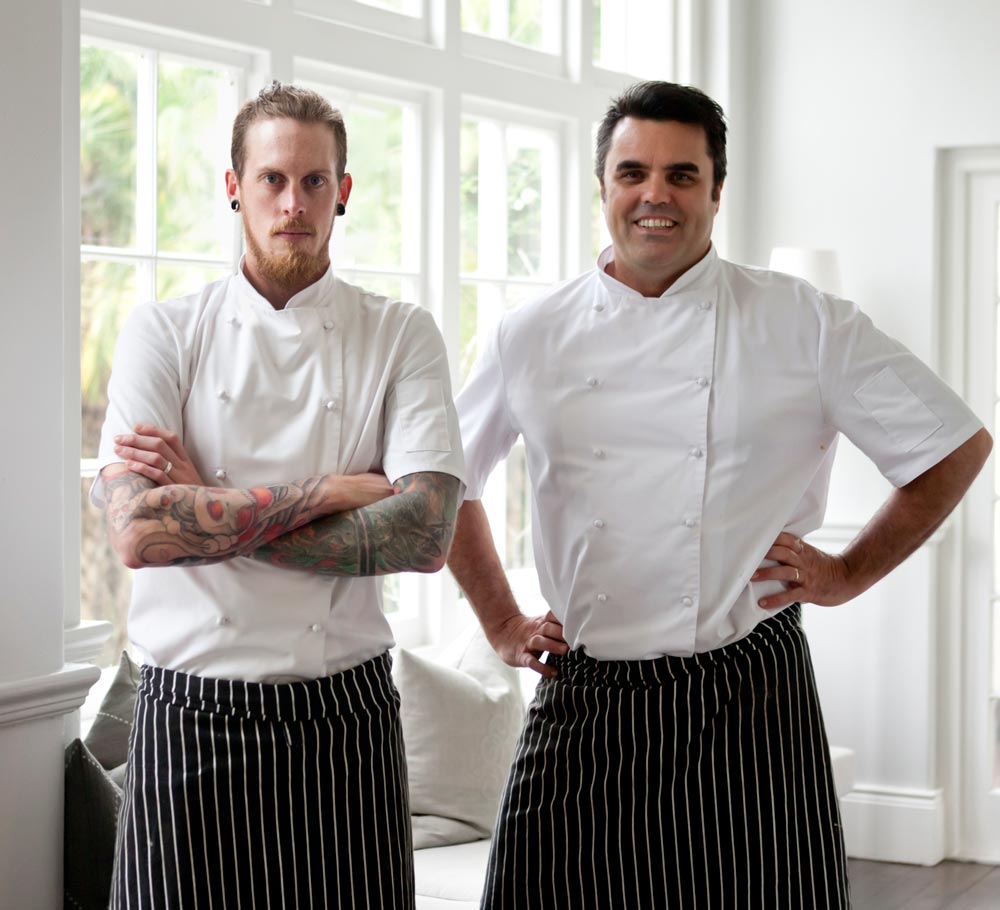 We’ve recently visited Greenhouse at Cellars Hohenort. Can you give us an idea of what goes into developing a complex dish such as The Butcher Bird’s Pantry – from concept to the presentation, to the actual food?

All of the dishes on the Greenhouse menu have unique backgrounds, as food inspiration comes from many different places. The Butcher Bird’s Pantry started out as a story about a very macabre habit of the Fiscal Shrike, where it impales its prey on Acacia thorns to store the food for later consumption. Our fascination with this indigenous species set the wheels in motion – from there we approached a blacksmith artist to produce the copper and stainless steel Acacia thorns that we wanted to spike the food on to. Once we had them in the kitchen, the creation of the dish creation. We looked at the diet of the Fiscal Shrike – other small birds, seeds, fruit and bugs and decided that they would all work, bar the bugs.

The first Butcher Bird’s Pantry was a quail taco with kimchi, peanuts and a beetroot kombucha marinated kohlrabi taco shell as well as a fried leg and thigh roulade rolled in Chenin Blanc and buchu syrup with seeds and quinoa. On the grass nest, we had a madumbi chip topped with chicken liver parfait and Pinotage gel. The whole dish just came together after all the groundwork had been done. Since then we have changed it from quail to duck, using the smoked breast, a leg and thigh confit roulade and duck liver parfait. 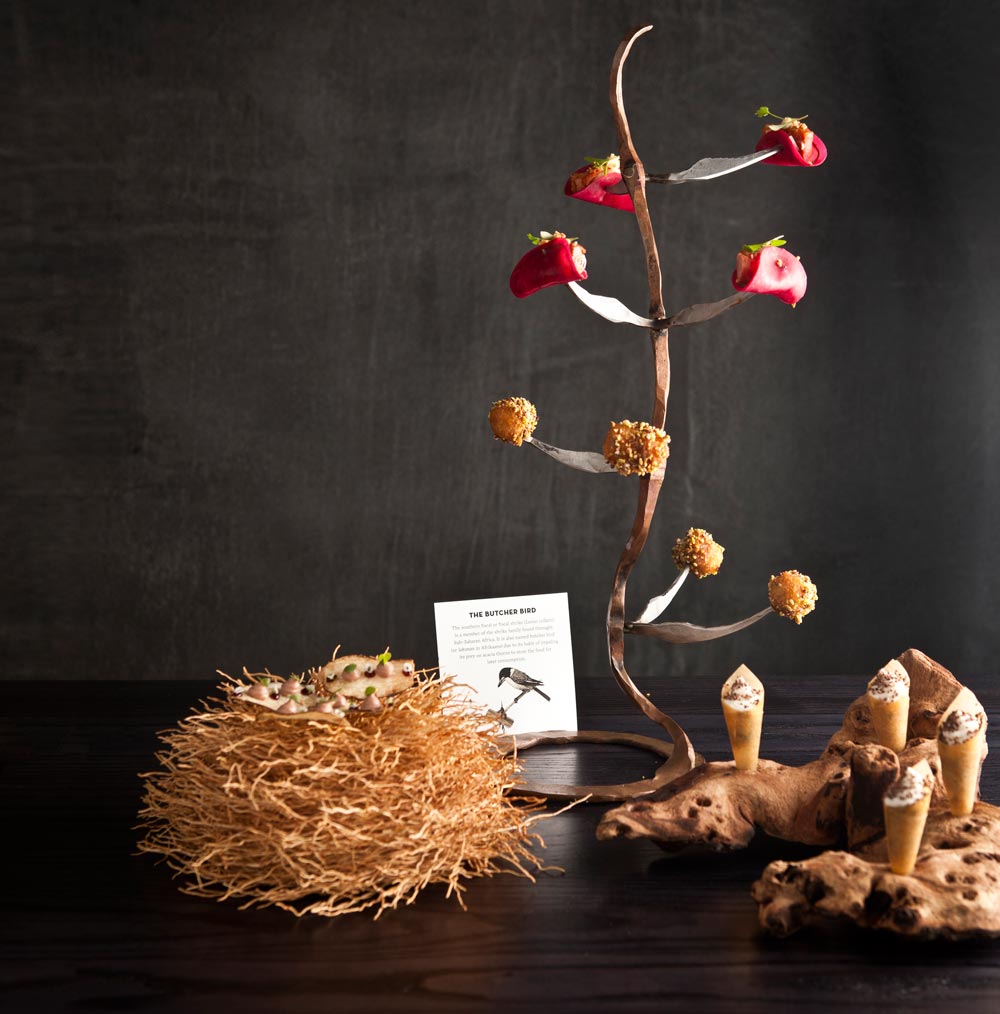 Do you lie awake at night conceptualising dishes in your head?

Rarely, I like sleeping when I hit the bed.

While dining at The Marine and at Greenhouse we enjoyed drinking Marvelous Blue. Can you tell us about your involvement with the Marvelous wine range (and any others)?

I have always had a deep appreciation for the art of winemaking and had wanted to try my hand at it for a long time. In 2010, I had the opportunity to make a barrel with some friends at the Newton-Johnson’s estate in Hermanus. The wine turned out really great (beginner’s luck I guess) and I loved the process of it. The following year, I luckily bumped into Adam Mason, of Klein Constantia, and asked if I could make another barrel with him. He obliged and we really hit it off. The next year, we decided to go bigger and formed a small company – celebrating the relationship between a winemaker and a chef. We made about 3 vintages together, giving birth to the Marvelous and Yardstick ranges, but I just couldn’t give the company the time it deserved and I decided to sell my shares to Adam and focus on my true calling. The wines are awesome, especially the Marvellous Blue – the Bordeaux blend – as that was the first one that I made.

As a chef who oversees so many kitchens, you must deal with a lot of staff; what then is the single most important quality that you look for in a young chef?

The first thing I look for is the right attitude – if the attitude isn’t in the right place, don’t even bother. Then, after that, it’s all about work ethics, passion and common sense.

Reality TV has had a massive impact on the way people perceive and eat food; do you think it’s had a positive or negative effect on the industry?

Reality TV has had both a positive and a negative effect on the industry. Yes, people can now appreciate what it takes to create the food that is served in the top restaurants, plus it has rewarded the best chefs with rock star status. But, on the other hand, it has also given a generation of youngsters the illusion that if they go to chef school and study hard, they will magically become a celebrity chef with their own cooking show. It is so common to see and hear about kids who think like this and then crash out of the industry a year later, due to the hours and the antisocial working times.

What gets you out of bed in the morning and into the kitchen?

My team gets me out of bed in the morning. If it wasn’t for the thought of letting them down and me not being there for them, it would not be so easy to get up in the morning.

Have you had a funny moment in the kitchen that has stuck with you?

Yes, we covered raw fish eyeballs in chocolate and decorated them like fancy chocolates, as there was a thief on the wait staff team – later that night we caught the culprit getting sick in the bathroom!

An ingredient that best represents your personality… a green apple – always enthusiastic and keen to keep life fresh by trying new things
Most expensive recent purchase… Local black truffles from the Karoo. I just received an invoice for R10 000 for 500 g!
Last book you read… Art of Fermentation by Sandor Katz (It’s worth a read if you like funky food).
Coffee or tea… coffee.
Bucket list holiday destination… Bali.

Read our travel review to The Cellars Hohenort Hotel and Greenhouse Restaurant. 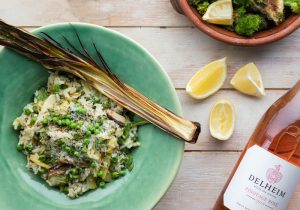 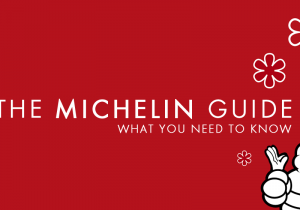 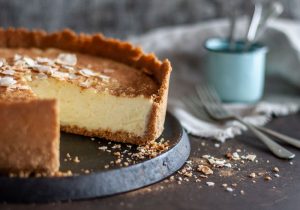 A Toast to Toast with Four Fabulous Toppings

The Muffin Recipe Round-Up You Have Been Waiting For