We truly are blessed in Cape Town, between the ocean, the mountain and the Winelands, there really are some breathtaking outdoors for us to enjoy. But, just in case the mountain is too far or the sea is too wild, we’re rather lucky that our parks and public spaces are quite something too. So, whether you’re looking for a spot to run, walk the dog or take the kids, here are our picks of the best parks in Cape Town.

The Best Parks in Cape Town

Recognised as a backdrop for many a wedding photo, Arderne Gardens is one of the best parks in Cape Town and is truly beautiful. It’s also one of the oldest parks in Cape Town, along with being one of the most lovely. There’s something for everyone to enjoy too, be it the glorious flowers, the arboretum or just watching the passing parade of families and fowl. 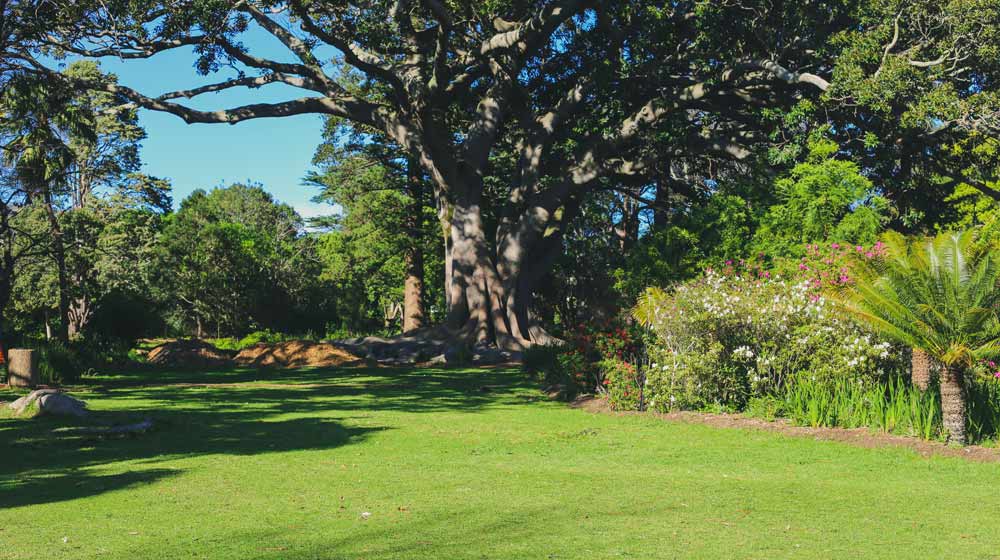 The Choo Choo Park, as the name suggests, is a safe and enclosed park for kiddies. There is a selection of well-maintained jungle gyms, swings and of course, its namesake, part of a choo-choo train that kids can play on and live out their conductor dreams. 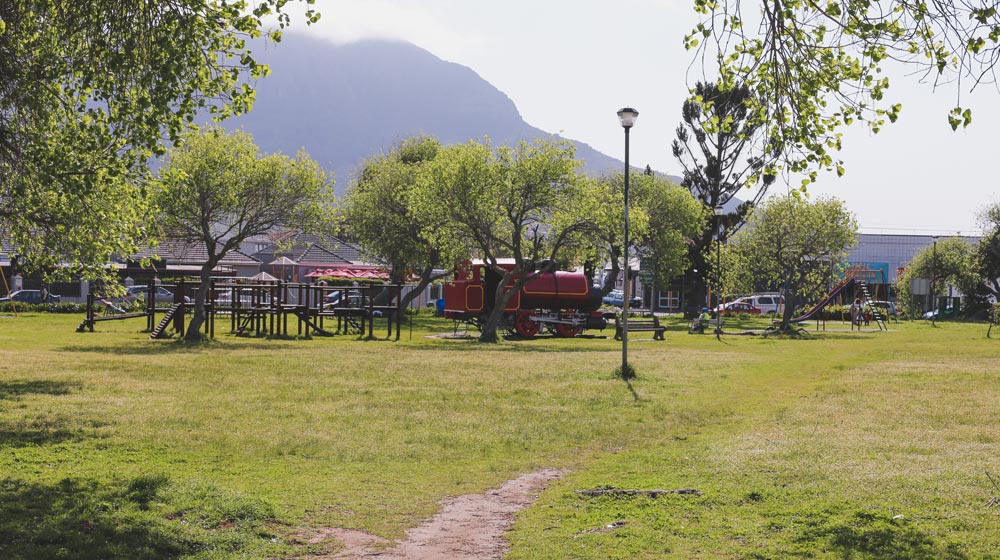 If your hound is socialised and good off the lead, then there is no better spot than De Waal Park to let him or her run wild. The park is large enough for you to stroll while your dogs run about with you. The large fountain also makes for a great way to cool off in the summer heat. If you’re also trying to tire out your human babies, there’s a jungle gym too, so everyone can play to their heart’s content. If you’re a CBD-dwelling Capetonian you’ll know this as one of the best parks in Cape Town for a stroll and a dog walk. 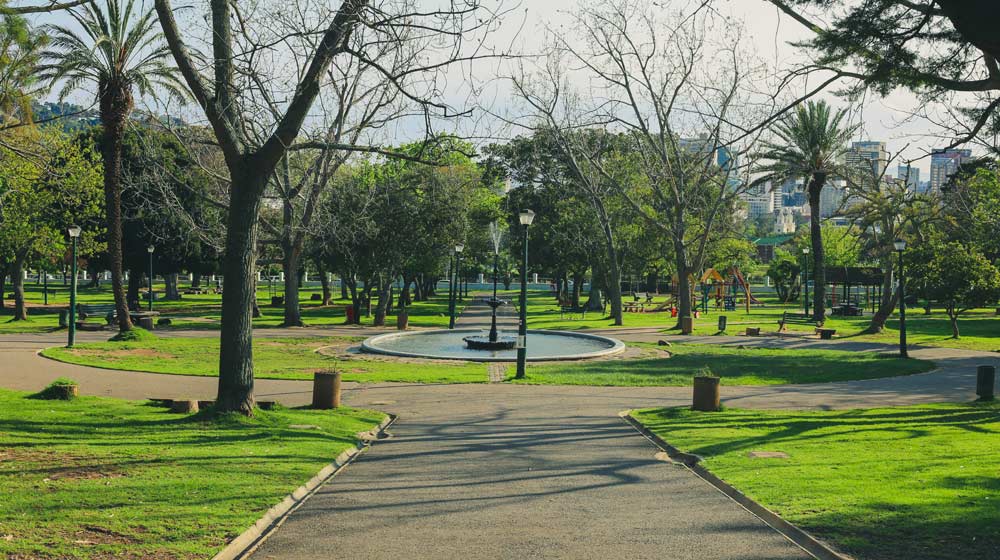 This small park packs a punch, considering it’s home to 500 varieties of rose bushes. Best way to enjoy these roses is while enjoying a light refreshment in the Tea Room on Sundays.

It’s difficult to say what the best part of the Green Point Urban Park is as it offers everything from a biodiversity garden to an exercise green belt. But, if you’re looking to enjoy a long walk in the park and then a cup of something refreshing afterwards, then this is the park for you. The Tea in The Park Café is serving up some of the best cakes and sandwiches around, close enough to the action so you can fill up and keep an eye on the kids too. Truly one of the most spectacular and most educational parks in Cape Town.

Best for: pretty much everything but we love that you can get a great cuppa and a slice of cake.
Good to know: has great, enclosed play areas and gorgeous water features.
Location: 1 Fritz Sonnenburg Rd, Green Point.
Times: Monday – Sunday: 07h00 – 19h00. 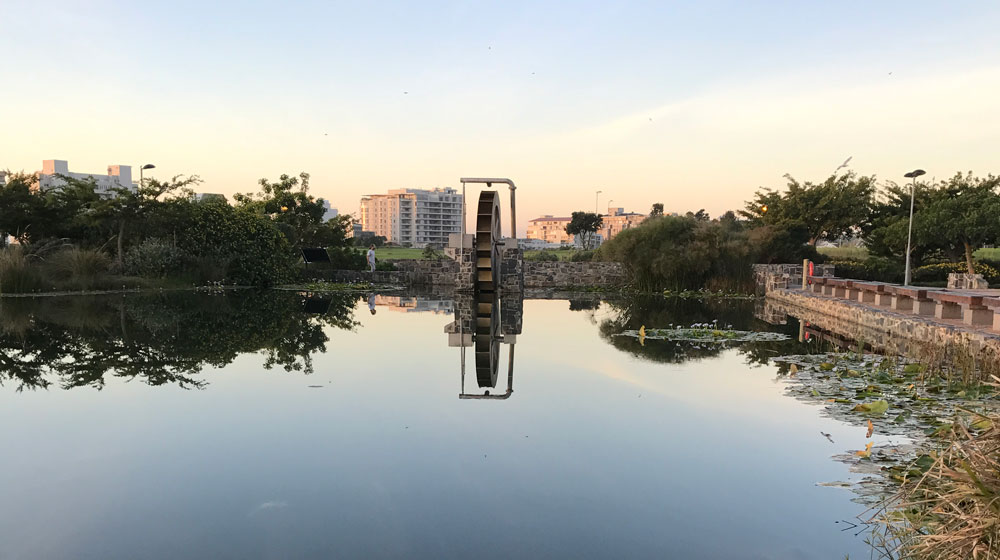 Keurboom park is a magnificent greenbelt that is looked after and maintained by the Keurboom Park Association. Part of the reason for the park is to provide an environment to protect Keurboom trees and as such you will see several of them in the park. It is a great place to walk your dog and they are allowed off leash except for in the enclosed kid’s play area.

Best for: walking your dog and safe for kids to play.
Good to know: the park is looked after by volunteers and you can donate to its upkeep.
Location:  Squirrels Way, Rondebosch.
Times: open 24-hours. 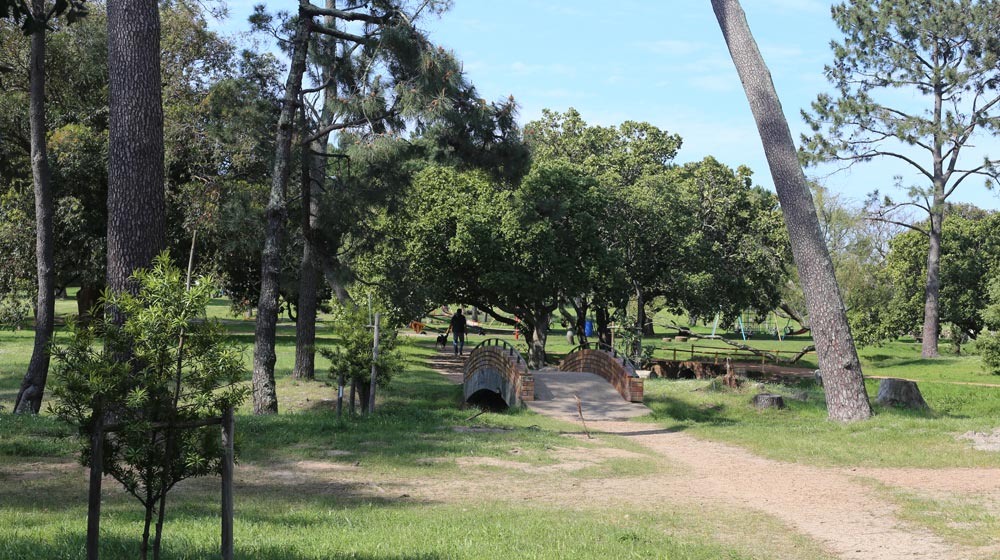 Maynardville has become known for its open-air movie screenings, so you can guarantee that it’s one part suited to picnics. Its vast healthy lawns are perfect for laying down a blanket and whiling away a couple of hours. 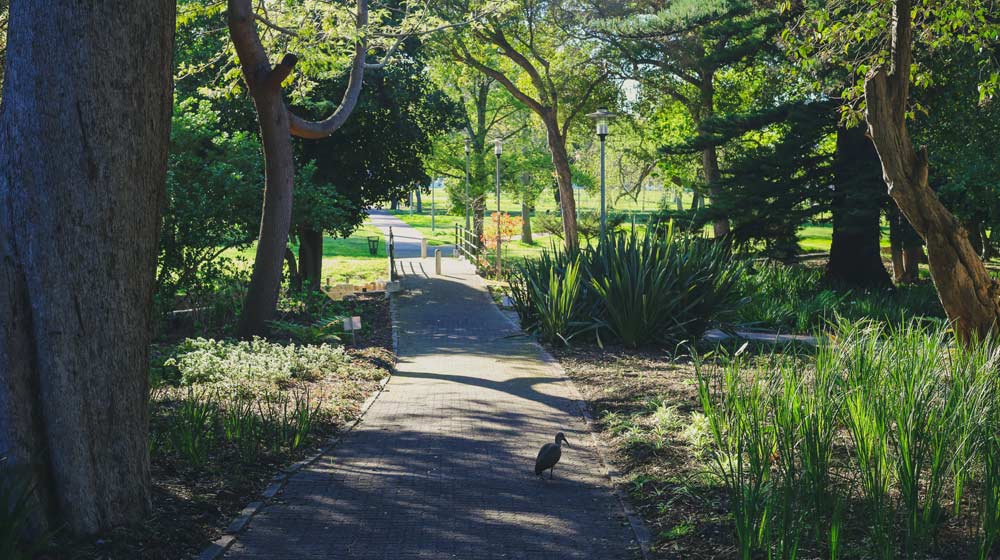 The Mouille Point ark is definitely one for the kids. It’s not enclosed but has loads for kids to do. From a few great and differing jungle gyms to a full mini racetrack to ride on – so be sure to bring toddler’s bikes along with. There are benches for parents, and if kids tire of the park there is the Blue Choo Choo train next door and Putt-Putt just a few steps up the road. The views of the sea are really lovely from the park.

Best for: entertaining kids.
Good to know: take bikes for toddlers and pack sunscreen.
Location: Beach Road, Mouille Point, right next to the lighthouse.
Times: 24-hours a day every day. 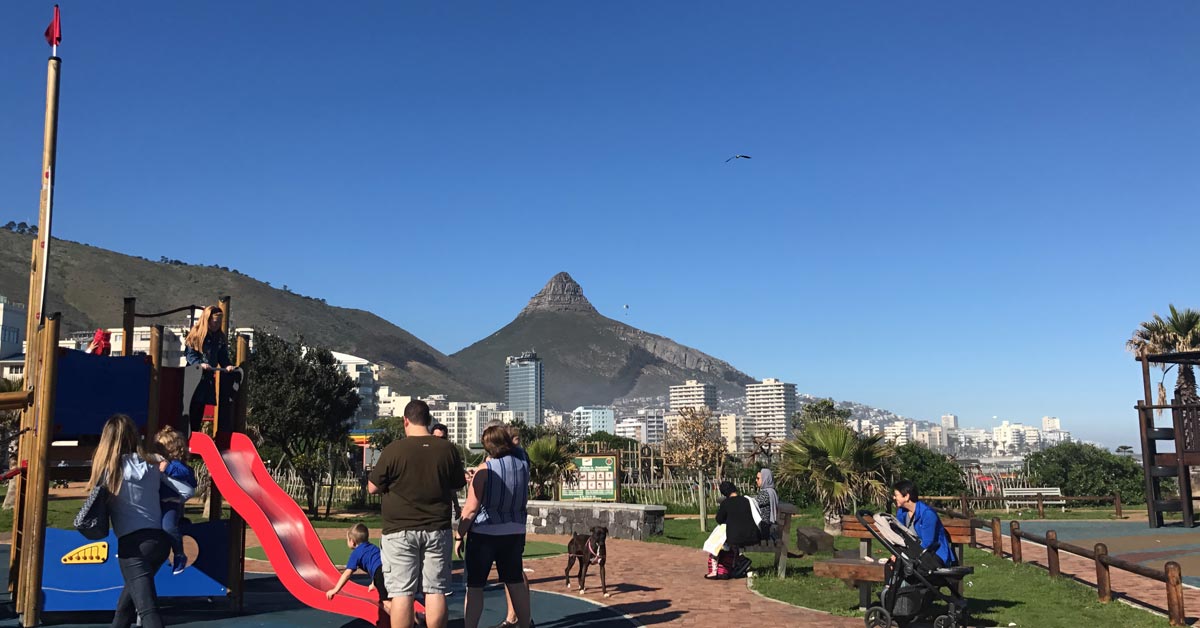 If you’re more suited to a flat running terrain (hey, us too!) then this is the park for you. Nestled in the leafy Rondebosch suburb, you have a generous expanse of flat, tree-lined grass to stroll, jog or sprint along. 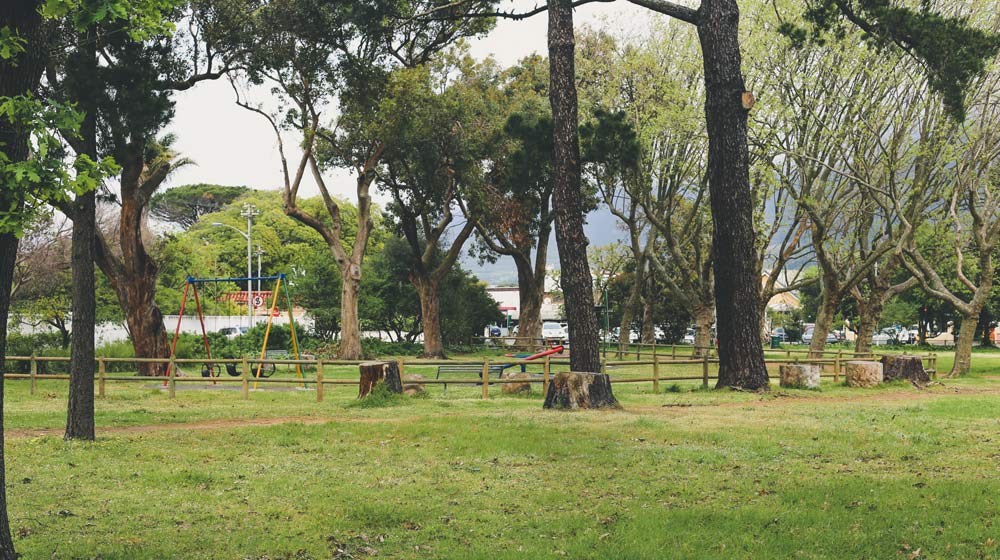 The Company’s garden almost needs no introduction. It’s the oldest garden in South Africa, having been established in 1650 by the first European settlers. This garden is steeped in local culture and is frequented by people working in the area who come through to enjoy their lunch. Along with the rose garden, historical statues and an aviary, it also features many indigenous trees and plants with huge botanical importance.

Best for: immersing yourself in history and feeding tame squirrels.
Good to know: buy a bag of nuts for R5 to feed squirrels or grab a bite at the Company’s Garden Restaurant.
Location: 15 Queen Victoria Street, Cape Town.
Times: Monday – Sunday: 07h00 – 17h00. 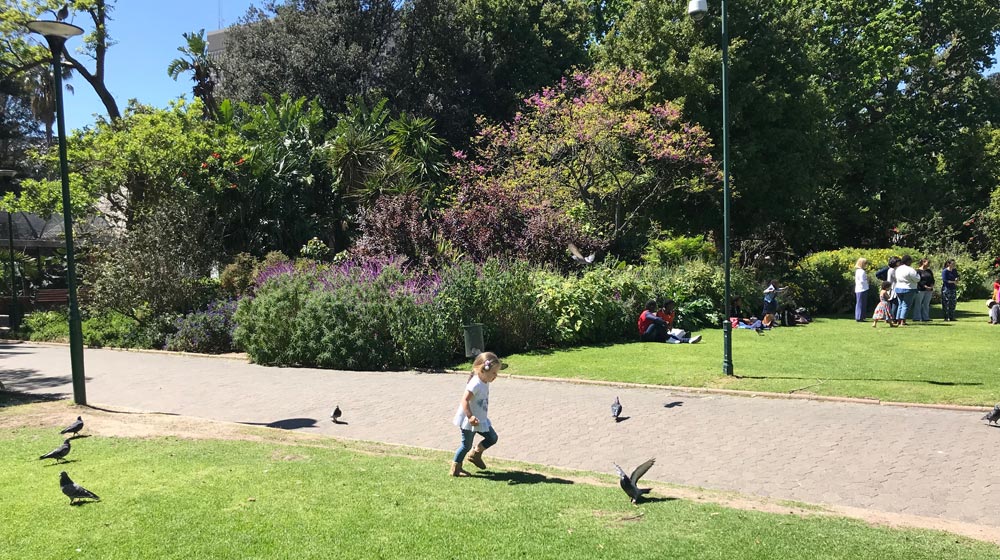 Offering respite from the Woodstock hustle. Trafalgar Park is a place where families and locals come for a breath of fresh air. Aside from the jungle gyms and well-maintained lawns, there is also the remains of a French fort dating back to the 18th century. Because of this, the park has been named a UNESCO heritage site. 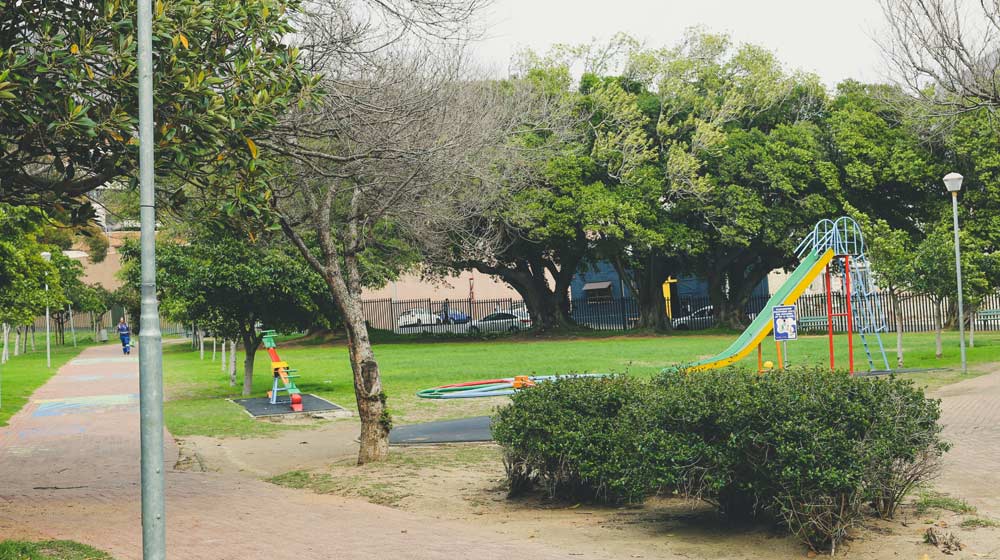 A massive 22-ha greenbelt that runs through the heart of Wynberg. It has an amazing and well-known conifer garden where you can admire these plants in abundance. There is a kids playground and a duck pond that littlies will love – bring some bread to feed them for a little fun. This is the starting point of the Krakeelwater spring, hence the name of the nearby Springfield Convent. The park was previously known as King Edward Park, and if you take a walk up towards Trovato link you will see a plaque that commemorates the coronation of King Edward VII on the 9th August 1902. The land for Wynberg Park (previously King Edward Park), was obtained by William Horne, a Wynberg resident and William Morom, a councillor of the Wynberg Municipality way back in the 1890s. 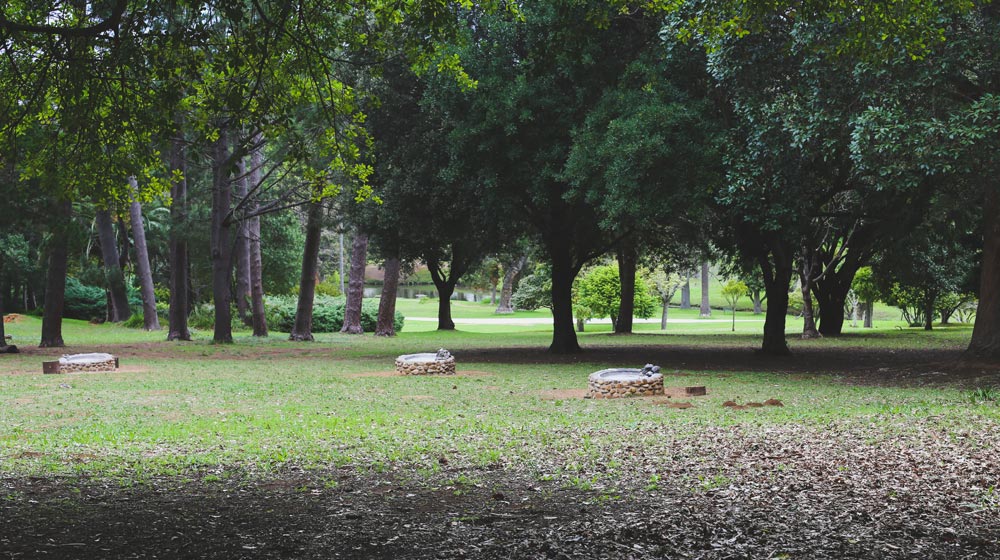 This massive park will keep everyone in the family occupied. It’s an open water wetland, river system and estuary and can host a number of recreational activities that such as canoeing, sailing and windsurfing. There are also fully equipped braai spots so you can set up for the day and keep the whole family well fed.

Best for: all of the sports
Good to know: you can braai!
Location: Promenade Road, Muizenberg
Times: Monday – Sunday: 08h00 – 18h00