Chef Ash Heeger is an anomaly. A rare breed of young chef whose food belies her years. Her cooking shows maturity and an understanding of flavour that chefs twice her age have yet to grasp. She’s gutsy, inventive and she’s just opened the doors to her new restaurant, Ash, in Cape Town. The restaurant has a unique approach to food and service that is set to challenge everything in the current foodie scene with bold honesty. 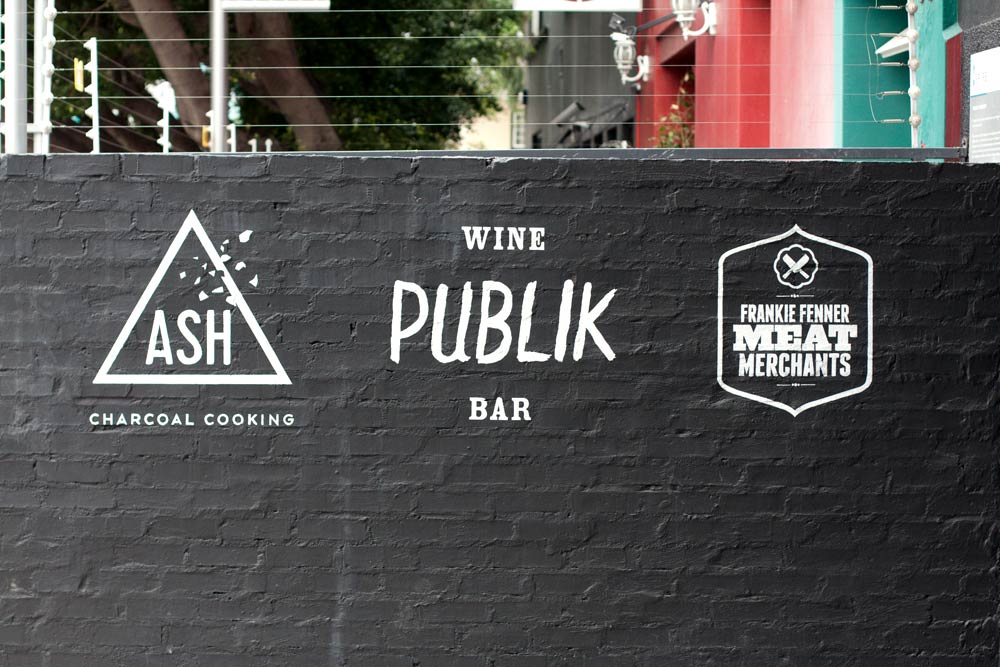 The space that was previously Frankie Fenner Meat Merchants and Publik Wine Bar has metamorphosised into a triumvirate with the newest member – ASH Restaurant. What was a chaotic building site just a few weeks ago is now a slick, functioning space, fronted by a completely open kitchen that mimics the relationship of stage and audience. The contemporary set up means that there is nowhere to hide – what happens in the kitchen doesn’t stay in the kitchen; it’s on show for all to see. While a version of this concept has been around for some time in the format of a ‘chef’s table’, at ASH everyone has this view, not just a privileged few. There’s a bravery in this that epitomises the concept at its core and carries through in the menu and food. A simple sounding dish such as Bread and Butter is in fact a crafted plate of food that has taken several complex processes to produce. Yet the beauty is not in the plating of gels, foams and tweezer-placed micro herbs, but rather in the layers of flavour and disguised intricacies that lead to widened eyes and awed silences.

The interior design of ASH is minimalist and led by the open-faced workspace. Striking emerald green and black angular tiles form the backdrop, while bubbling pots and a busy kitchen team create activity in the scene. 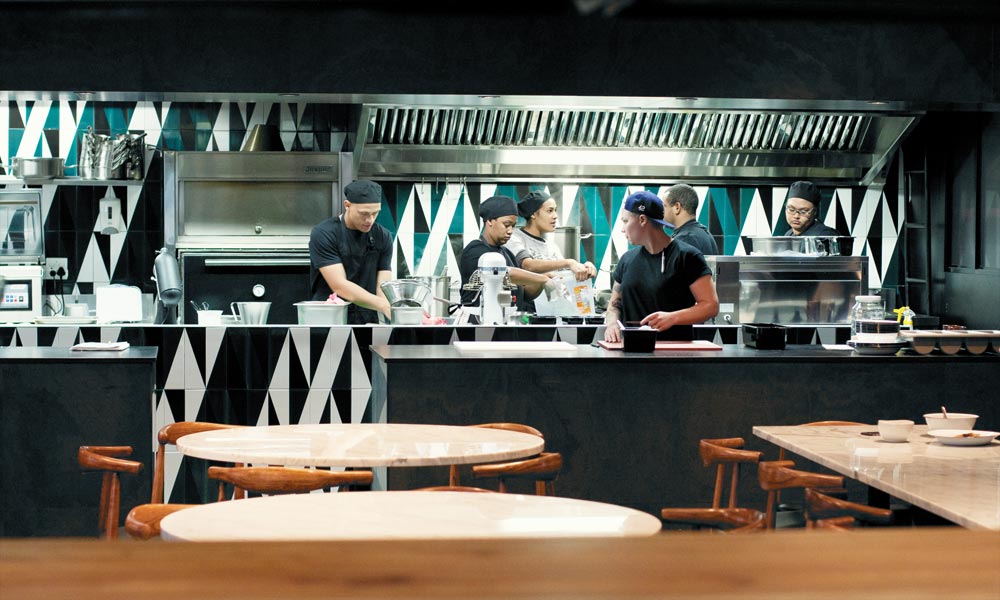 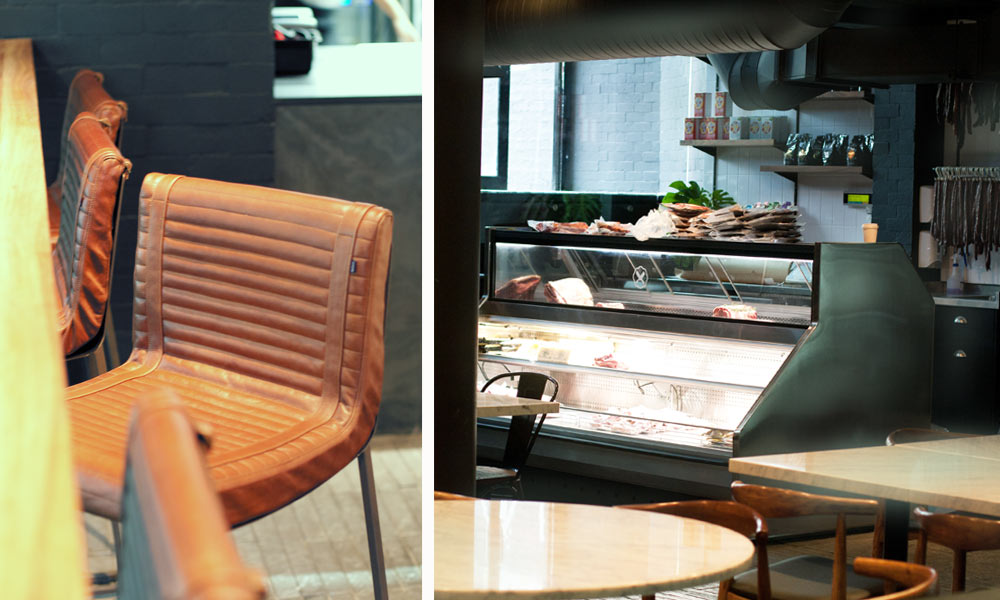 Marble topped tables and bar chairs designed by Dark Horse give a slick but unpretentious feel. Those in the know will appreciate stylish touches such as Opinel steak knives and the wine list of curated, lesser-known varietals that will force diners to drink outside the box. Another unique aspect to the running of the restaurant is the absence of wait staff. Instead, orders are taken by the maître d’, and Ash and her team will personally deliver dishes to the table. This eliminates that same disconnect from kitchen to dining room that lets so many restaurants down. It’s also a major factor in the blueprint of the experience.

Eating at ASH is an intimate affair that connects you to your food. You will learn where and who it comes from and with this comes a respect for the ingredients. As is obvious by the connection to FFMM and how the restaurant came to be [open letter from Andy Fenner looking for an ethically minded chef] the focus was always going to be meat-centric. The difference being that the meat is ethically reared, responsibly sourced and cooked with the utmost regard. Once you’ve had what FFMM has coined ‘proper meat’ it’s very difficult to go back to anything else. The fact is it just tastes better. As modern day meat eaters we have a responsibility to be more mindful of the impact of our choices. Isolating yourself from that accountability is just not acceptable. The concept of ethical eating extends beyond just the meat dishes. All vegetable ingredients are sourced from projects such as Abalimi Bezekhaya Urban Farming, as well as from local foraging micro businesses. Andy Fenner’s original call was for someone to come in and take up the challenge of creating a dining experience that hadn’t been seen yet in Cape Town, and that has certainly been achieved.

The menu is reflective of Ash’s personality – minimally worded, to the point and with a bit left to the imagination.

It consists of a list of bar snackles like Puffed Pig Skin – deep-fried salted pork skin, which has bubbled to perfection. Bread and Butter – potato bread served with cultured butter, miso salt and whipped chicken fat. Yes, you read right, whipped chicken fat. Lamb riblets are honey brined, smothered in hot sauce and then slow roasted in the crown jewel of the kitchen – the Josper Grill. The bone-in version is meltingly tender and served with hot sauce and mayo. The Pig Head Scrumpet, a pork terrine that’s panned and deep-fried is served with apple, hanepoot and szechuan sauce. Being partial to beef tartare we were not disappointed by Ash’s version – Green Beef – expertly chopped and mixed with homemade mayo, served with dressed foraged greens and a green oil. Any description, no matter how flowery, would struggle to do justice to these dishes, you simply have to just taste them for yourself. 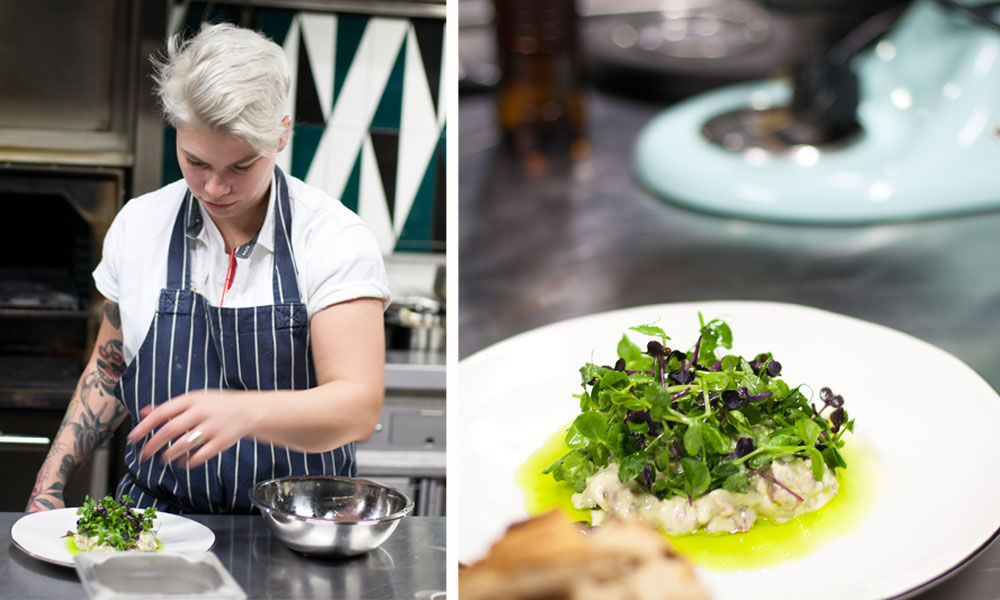 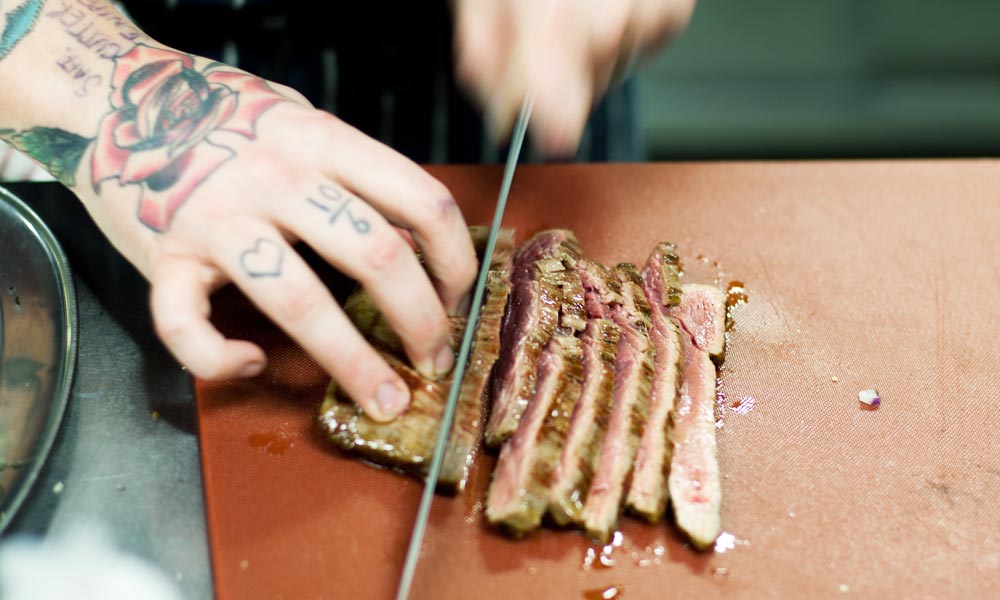 The main of Dry Aged Beef can be accompanied by a variety of things from the side menu, but seems made to be matched with the Choucroute Cabbage and Bone Marrow Mash. Don’t expect anything average about these dishes. Silken mash, meaty gravy and perfectly cooked sirloin steak (steak cuts will change dependent on what is available from the butchery). No questions of the preferred cooking of the steak are asked, it’s cooked the way it’s supposed to be and it’s perfection. The Beetroot and Fennel Salad served with buffalo curds and almond praline is a light, clean dish that shows how a few simple ingredients can create the perfect mouthful. To finish off we were treated to doughnuts served with whipped cheesecake mix and freshly baked Madeleines. Both dishes were sublime and reinforced the theme of the menu – absolute simplicity, cooked with intention, with nowhere to hide.

The food at ASH is delicious. And while delicious may be the single most overused word in any foodie vocabulary, it is ultimately what any food experience is about. Delicious food is the most memorable and this is what you will find at Ash.

This is not the place to go to if you’re the person that orders the chicken salad, without the chicken, dressing on the side and extra olives. Dishes are conceptualised, flavours are balanced and meals are served as is. It’s a food experience for those who will be able to see through the ‘simplicity’ and appreciate the sophistication and skill.

Somehow this 26-year old chef has found the parity between honest cooking and explosive flavour and she’s serving it up minus the pretension. She has the equanimity of someone far beyond her years, which can only be achieved through a combination of blood, sweat, tears, heart, soul and, probably at times, utter exhaustion. The opening of Ash is the beginning of an incredible food journey, not only for Ash and her team, but for everyone who steps through the doors. 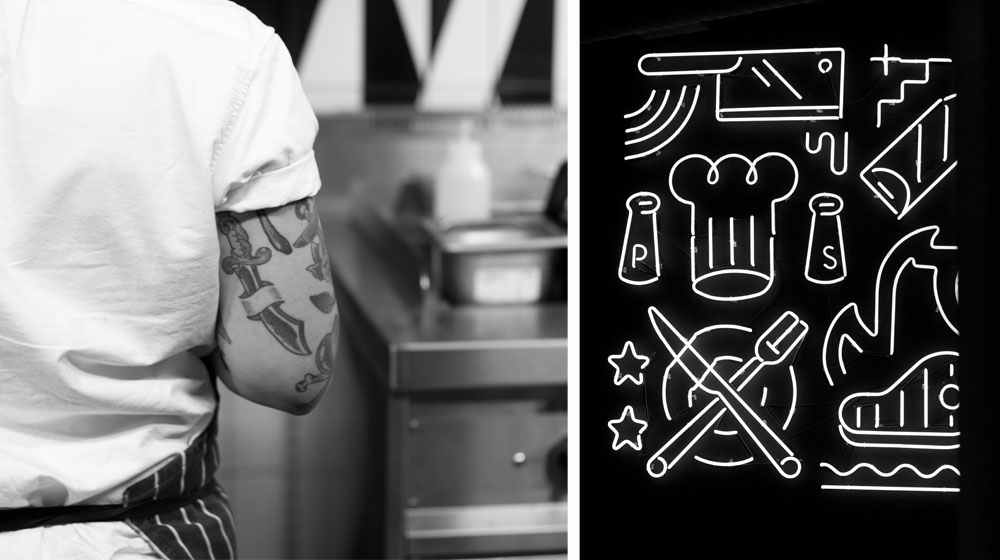