It all started in 1982, during the terror of the apartheid regime, when Peter Tempelton of the Catholic Welfare Bureau, Rob Small, Christina Kaba and Dave Golding and others, began to think of practical ways to help the affected black and coloured members of South Africa survive. The idea was to make use of the empty spaces in the townships and turn them into something invaluable – fresh food. So they established Abalimi Bezekhaya, and later Harvest of Hope and the Farm and Garden National Trust. The aim was to raise funds to educate micro-farmers and gardeners, anyone who grows fresh food at home or in plots up to one hectare in size, allowing them to hone their expertise. Abalimi Bezekhaya is a community based agricultural, voluntary association, non-profit organisation, which allows underprivileged members of the township the chance to overcome poverty by growing their own food in a garden under their own management. 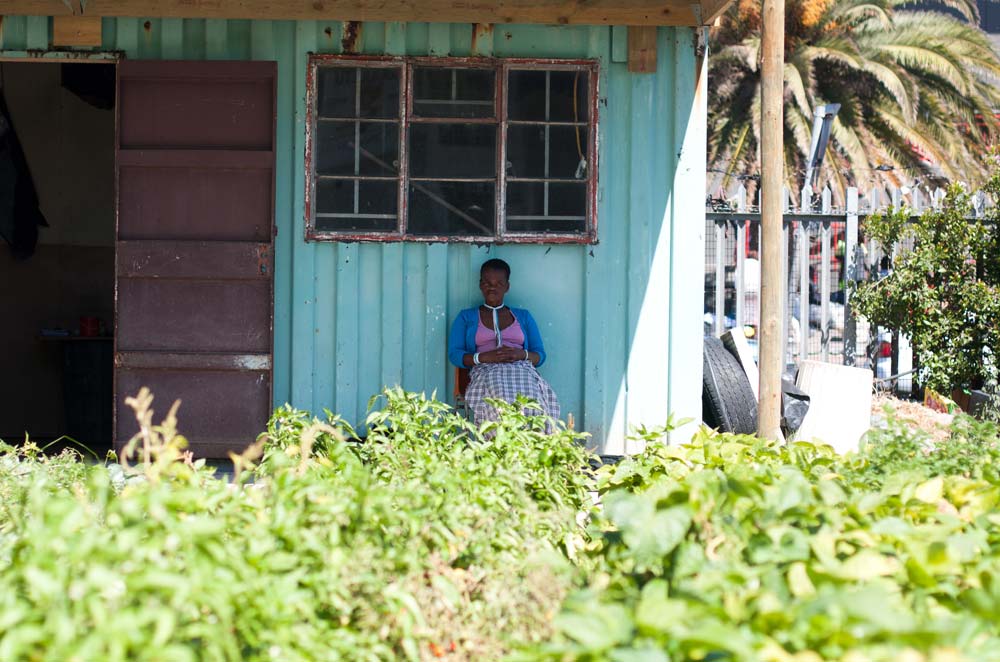 It’s an incredible organisation that uplifts the people of the Gugulethu and Philippi townships by enabling them to learn a trade that they can take anywhere they go, as well as pass it on their children and fellow community members. How it works is a member of the community, either acting as an individual or as part of a small group, is given access to seeds, tools and information to grow and maintain their organic gardens. From there they are able to feed themselves and are given the opportunity to sell any extra produce on to Harvest of Hope, the first community supported vegetable box business for micro-farmers in South Africa. There are a few different phases within the structures of the gardens. The first are survival and subsistence phases, where the farmer is simply growing enough to survive or produce a small seasonal surplus, then it moves on to a livelihood farming phase where the farmers are producing enough to live off, by by eating and selling enough for themselves and their families and lastly it’s commercial farming, where profits can be made.

There are many varied sizes of farms involved with Abalimi, and some of those members are doing more than just growing and selling their vegetables. A number of the farmers have formed an organisation called the Vukuzenzele Urban Farmer’s Association (VUFA) and they overlook issues that any of the farmers may be experiencing. One such issue is the matter of the Philippi Horticultural Area, roughly a 3000 hectare piece of land. The farmers’ association wants the land for commercial agriculture, a move that would improve the lives of thousands of families in the area. The city of Cape Town is in talks with big business owners to develop gap housing estates on the best of the land, and the farmers are trying to fight this potential deal. It would be a massive victory for the farmers, and one can only hope that the city council sides with agriculture and sees the massive influence the piece of land has for food and water security. This land is also known as the most important re-charge sump for Cape Town’s Cape Flats Aquifer, which could give Cape Town up to 30% of its water in future. This potential could be destroyed if the land in built upon, because the aquifer will not be properly recharged any longer. Sibongile Sithole is one of the men leading this organisation, which is mostly run by mothers, acting as the current vice chairperson. He also runs one of the most productive urban farms, situated near the Nyanga Junction in Gugulethu, with three women, in the livelihood phase. He’s an inspiration to the younger people of the community, and is actively calling for more of them to become involved in the organisation, to ensure longevity. As he said, “we need fresh blood!”. 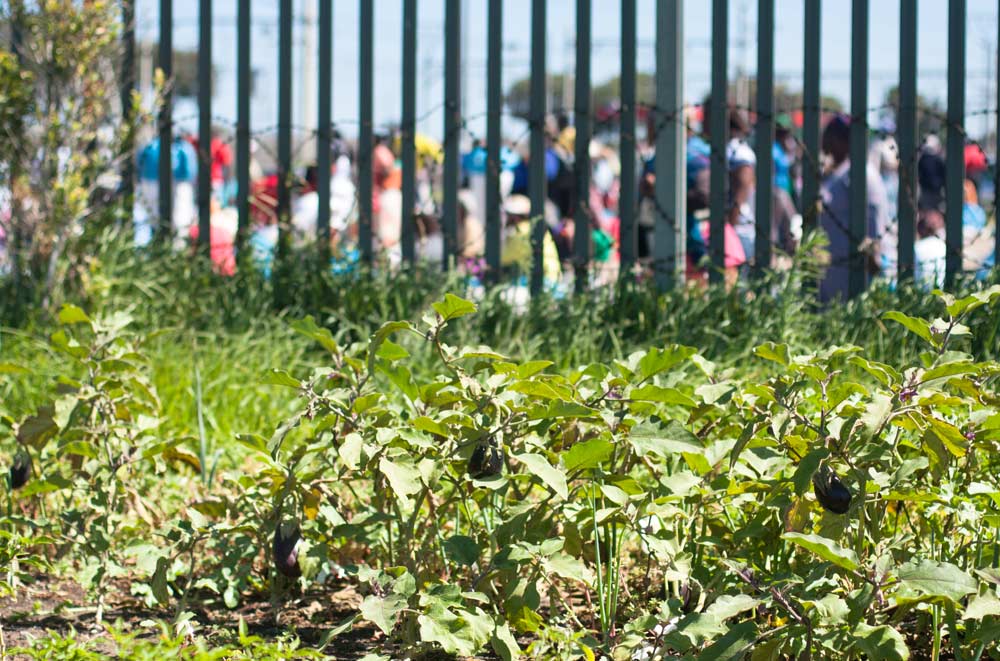 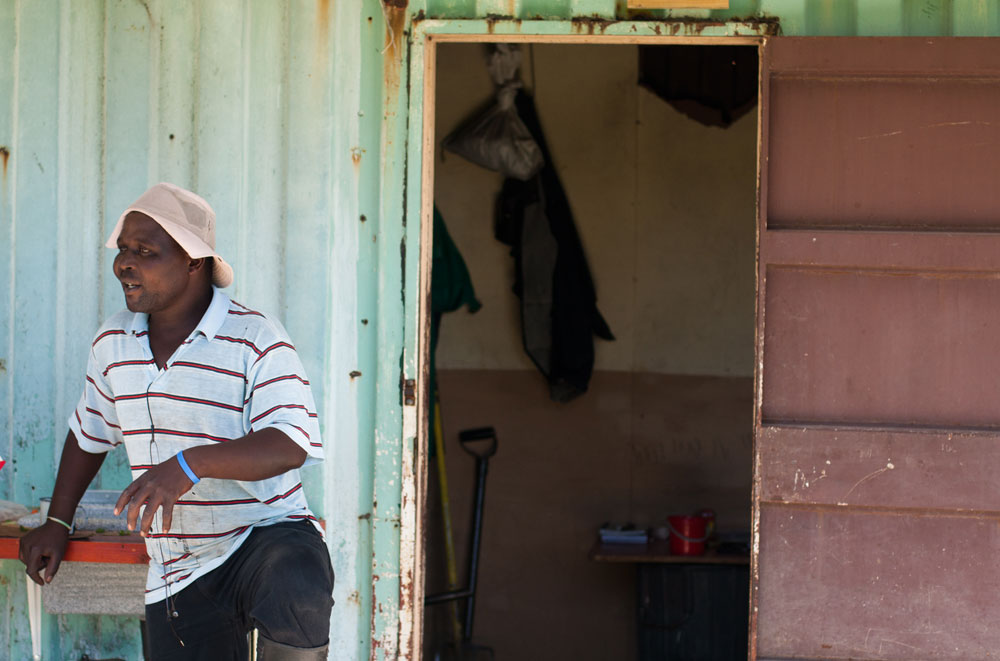 Further along the farmer development chain of phases in micro-farming is Mabel Bokolo, who has reached the pinnacle level of livelihood farming, bordering on commercial. Not only does she grow luscious organic vegetables for herself and her family, but she sells a number of her vegetables to the Abalimi affiliate Harvest of Hope, which supplies fresh veggies to the people of Cape Town. She also provides seedlings and a training venue for the Abalimi farmers, as well as makes her own compost. She’s a hardworking super-granny, who has concrete plans to move back to the Eastern Cape to develop her farmland there, with and for her family, complete with pigs, chickens and cows. 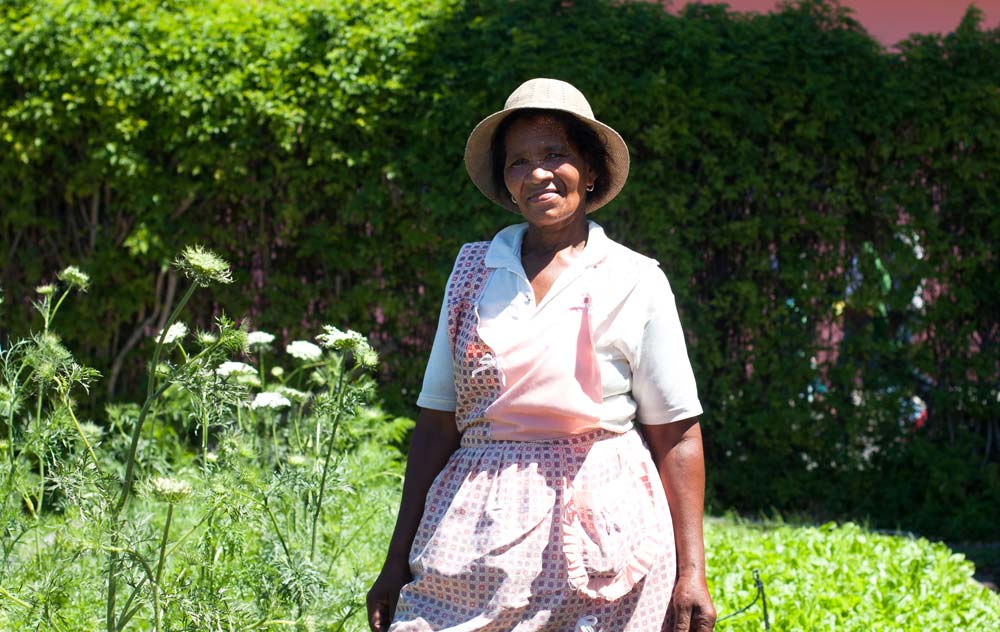 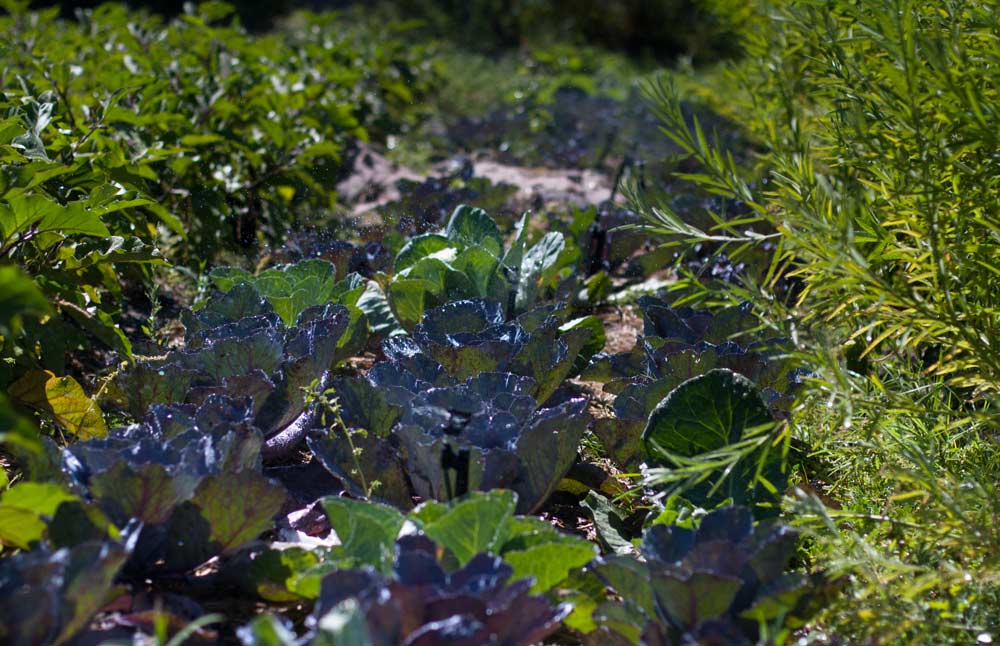 The Harvest of Hope is a popular enterprise whereby people in Cape Town sign up and pay for a weekly delivery of organic vegetables. There are between 30 and 40 drop off points all over the city, where you simply stop by and pick up your bag. The prices range between R99 and R133 and while you may never know exactly which veg you’re getting, you’re guaranteed to get the freshest, most wholesome produce at a price and quality you simply can’t get at any supermarket. Harvest of Hope actually buys the vegetables from the Abalimi farmers, they then pack the bags and boxes. Any unsold produce is donated, often to charities in the area. 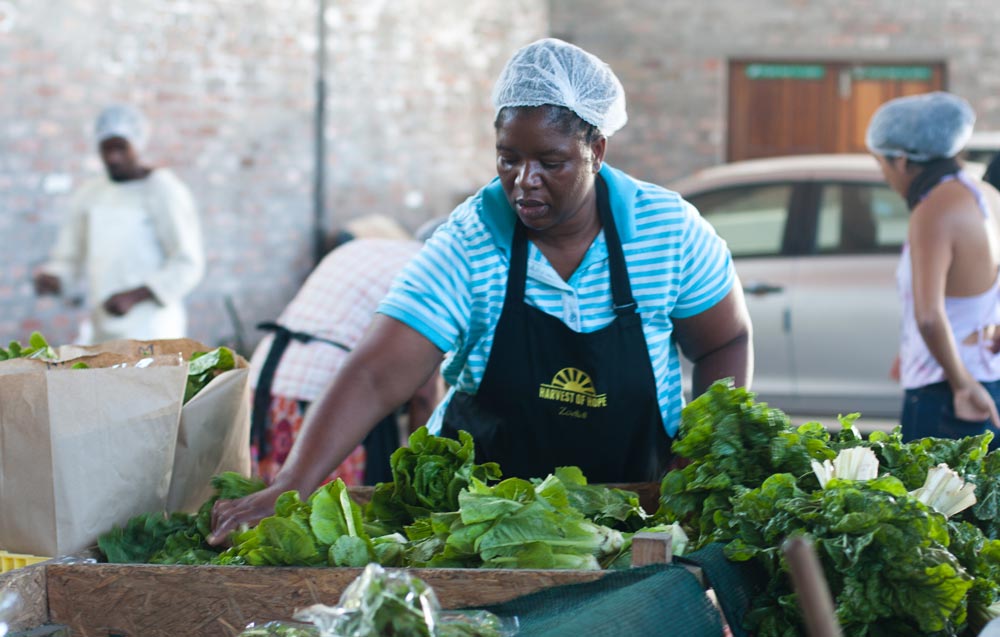 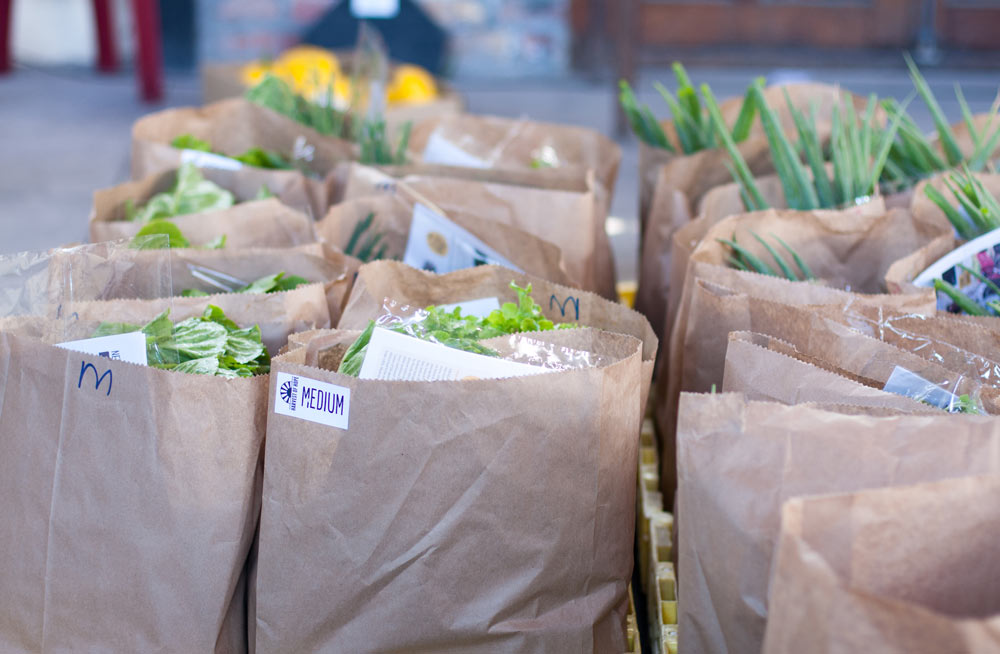 In a country such as South Africa where real change and development can and should happen through agriculture, it has never been more pressing to support these farmers. So, do your bit for your own health and your country and sign up for your weekly bag of organic veggies, and not only save money, but know that you’re helping a farmer in the townships to feed themselves and their family. 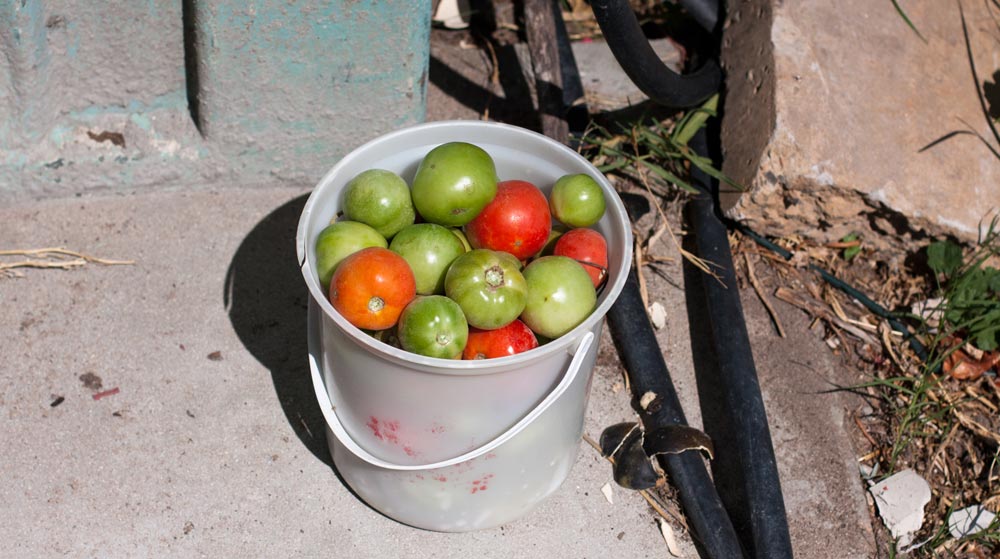