Kombucha is a rising star in health circles of the Western World, but it has in fact, been around for thousands of centuries in the east. This fermented, live drink with a flavour reminiscent of apple cider, is said to first appear in records dating back to 221 BC in China and was known as ‘The Tea of Immortality’. A Korean doctor by the name of ‘Kombu’ treated an ailing Emperor with this ‘cha’ (tea), hence where it derives it’s name.

The use of the drink spread to Russia, puzzling researchers as to what it was that kept people in certain areas of the country healthy, and more specifically, cancer-free. Further investigation showed that a common link in these areas was that residents consumed what was called ‘tea kvass’, a powerhouse, fermented tea packed with nutrients. From here its usage spread to Germany and only around the 90s did it make its way to the US and other parts of the world.

A SCOBY (symbiotic culture of bacteria and yeasts) is a rather odd looking, almost translucent and kind of slippery ‘being’ that almost resembles a jellyfish… for lack of a better description. It may look and feel rather odd, but this relationship of bacteria and yeasts is a veritable powerhouse! Once placed into sweetened tea, the SCOBY uses the sugar and converts what was once just tea, into a drink packed with minerals, vitamins (B and C), enzymes and acids like glucuronic acid, gluconic acid, lactic acid, acetic acid, butyric acid, malic acid and usnic acid – all of which sound really scary, but are in fact super healthy! The probiotic microorganisms that effect this change, are in themselves, great for gut health. The biochemical activity of the SCOBY causes it to grow and form a new SCOBY through each batch that is brewed, which can be used as starters for future batches.

Rooibos Kombucha Is Easier To Make Than You Think

The brew, which is really easy to make at home, has many powerful benefits, namely detoxification, joint and gut health, to name just a few. For those who suffer with arthritis, drinking kombucha is said to help make symptoms more manageable – the brew contains glucosamines, which increase synovial (joint) hyaluronic acid, relieving arthritic pain. Many athletes also swear by it for helping the body rebuild tissue (in the knees specifically) and others find its detoxification properties essential to their training. It is full of hardworking probiotics that are great for the gut, intestines and the rest of the body and those living a healthy, clean and natural lifestyle drink use it as a mainstay in their overall dietary health.

Kombucha is easy and inexpensive to make, and therefore the commercial interest in researching its many benefits has been limited. Those who drink Kombucha swear by its powerful benefits, and certainly thousands of years worth of continued usage must count for something. Now Imagine the combination of Rooibos to get Rooibos Kombucah, the proof is really in the pudding so to speak, and you won’t really know until you try it for yourself – so get brewing.

You will also need glass mason jars to brew in (enough to hold 2l of liquid, as well as muslin or cheesecloth to cover and string or a rubber band to seal to make your rooibos kombucha 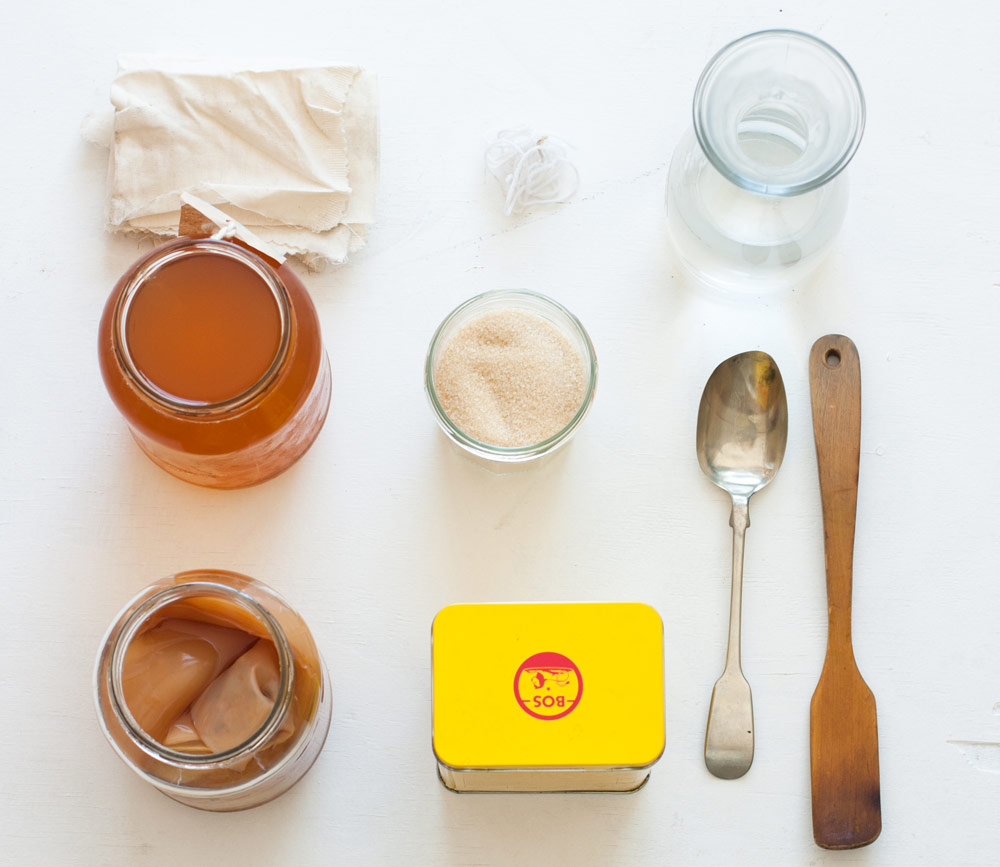 Put the water into a saucepan, add the tea bags and bring the water up to a boil. Once boiling, switch off the heat and let the tea bags steep for about 15 mins. Stir occasionally. Allow the tea to cool down slightly and then add the sugar. Stir until it is all dissolved 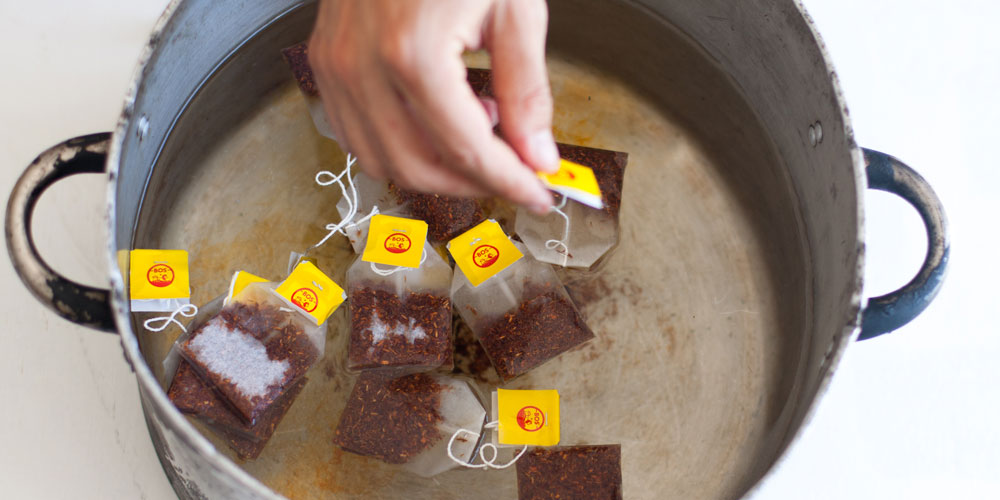 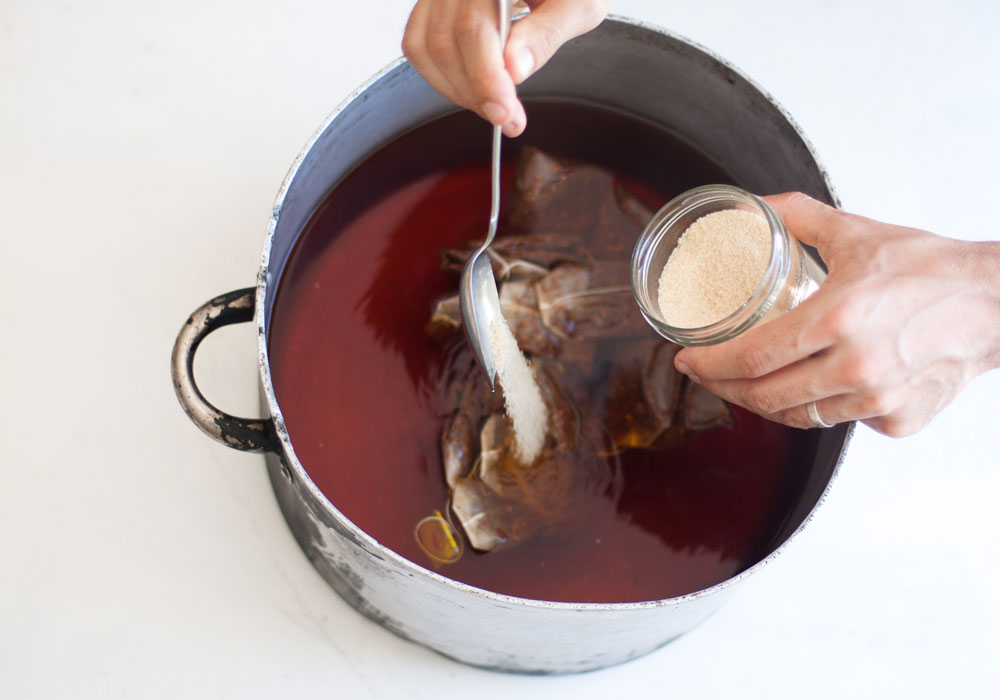 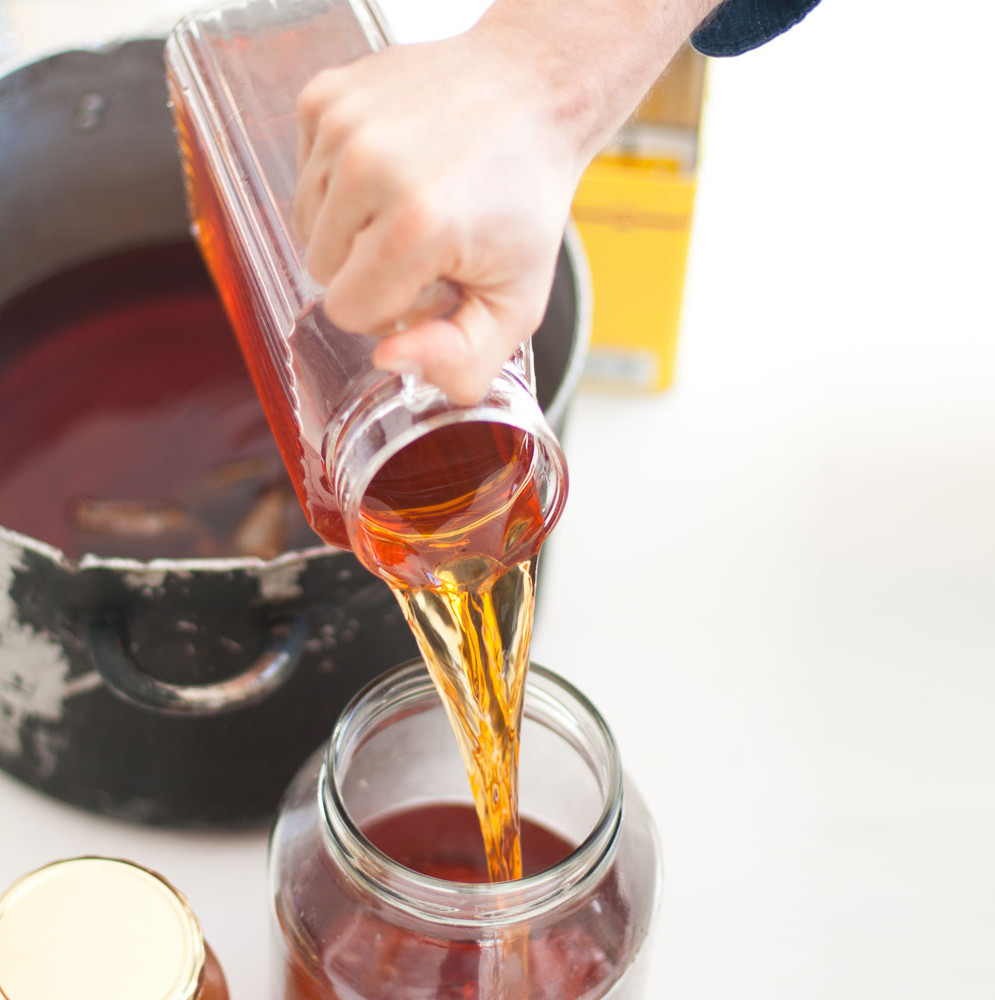 Pour the tea into your brewing container/s – preferably clean, glass mason jars with wide necks. (Note: do not wash containers with cleaning products that may kill the SCOBY, instead clean with boiled water or distilled vinegar and allow to dry naturally).

Allow the tea to cool to room temperature and then add the tea from the previous kombucha batch and stir. Lastly, place the SCOBY into the tea. (Note: also keep your hands free from chemicals, such as cleaning products, when handling the SCOBY. It is very delicate!) 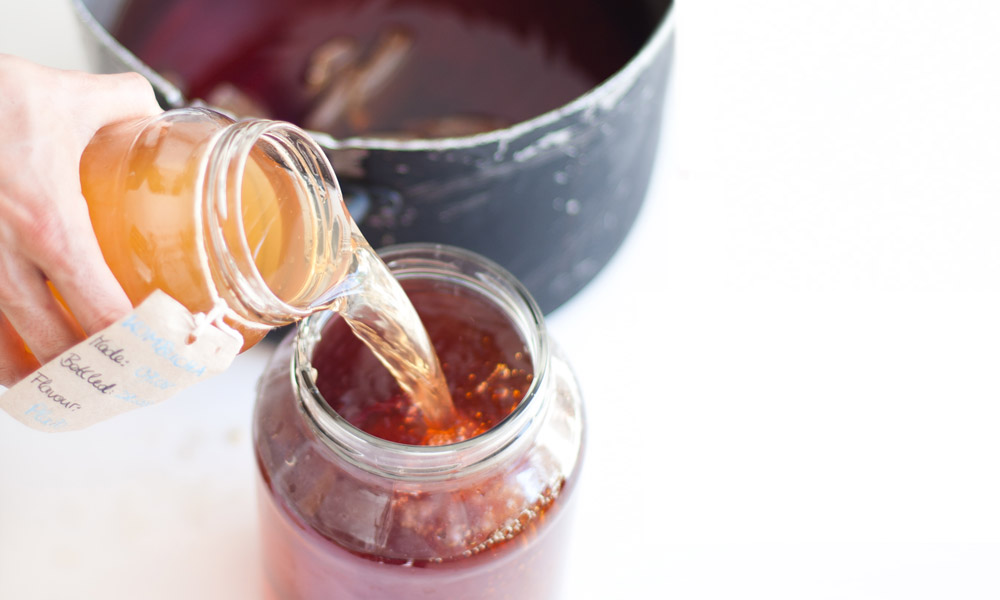 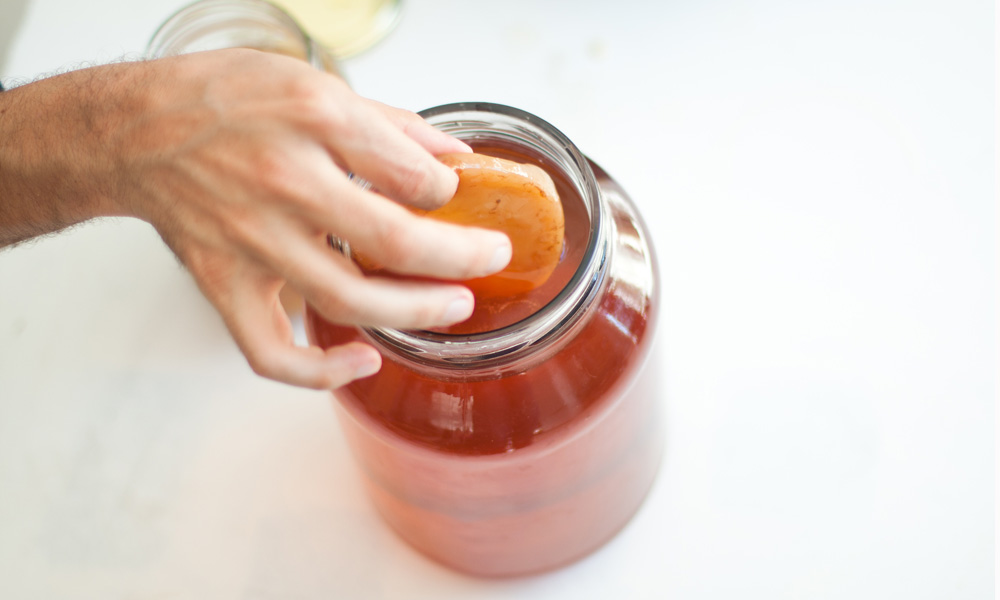 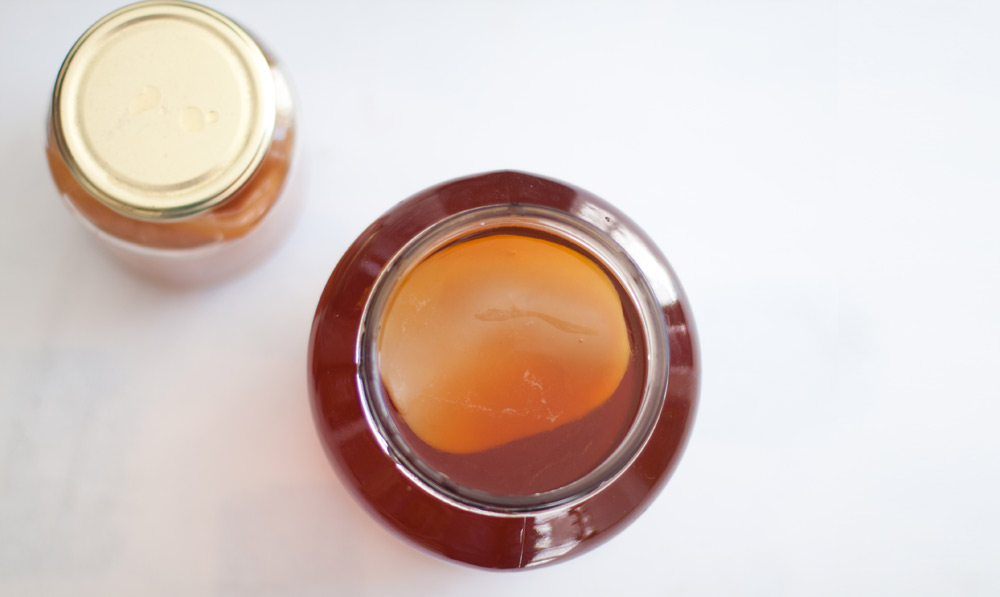 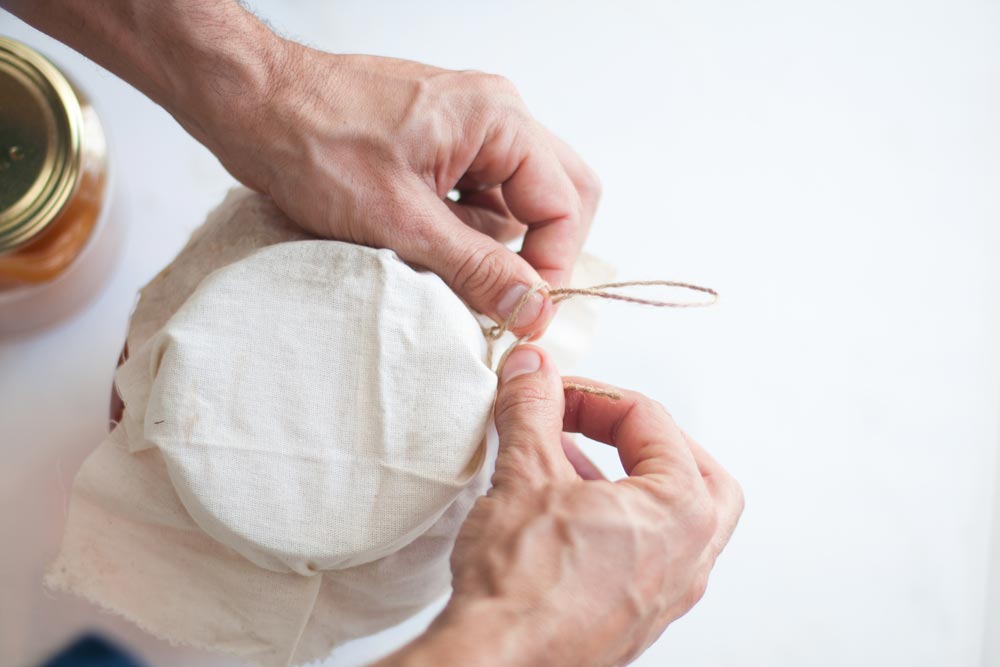 Cover the top of the jar with a piece of cheesecloth or muslin, ensuring that it does not come into contact with the SCOBY. Leave sealed in a warm spot, but away from direct sunlight for 7-10 days.

Brewing kombucha will require some trial and error to get the right flavour profile. Brewing speed will also be dependent on weather conditions, the hotter the temperature, the faster the fermentation will happen and conversely the cooler, the slower. If the tea tastes too sweet, it may be that it has not fermented enough, as most of the sugar should have been converted – the resulting flavour should be slightly tangy with a mild fizz. A vinegary, or very sour brew may have gone past the correct stage.

Once you feel your brew has reached the correct flavour profile, scoop the SCOBY out and place into a clean jar along with enough brew to keep it covered. Decant the remaining tea into smaller mason jars and add flavourings if using. Flavourings can be added in quantities depending on the strength of flavour you prefer. 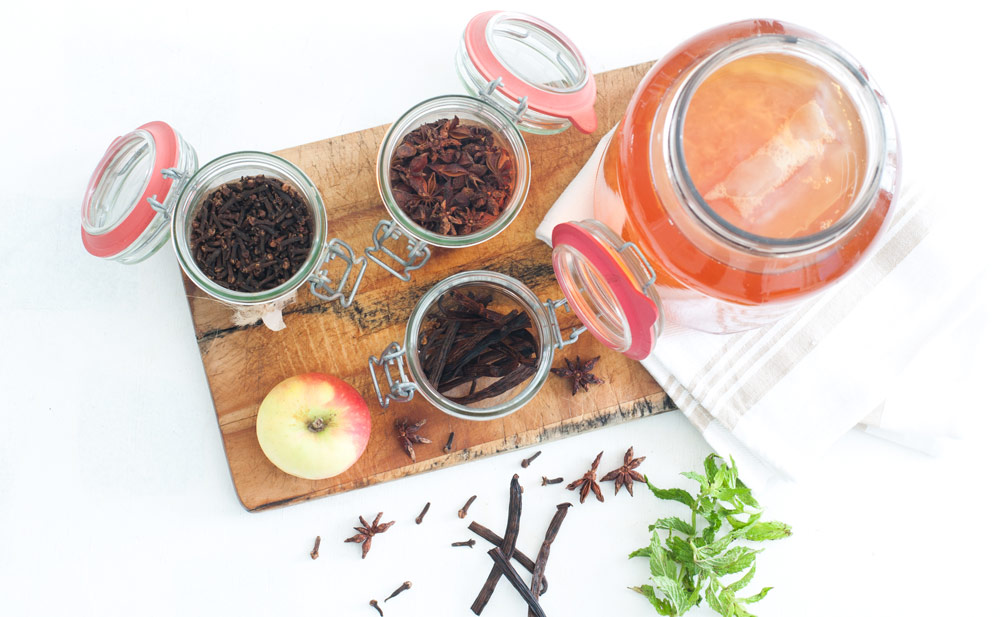 Rough Guidelines
For apple, add 2-3 slices per jar.
For vanilla, split the pods lengthways and add the whole pod (1-2).
For ginger, slice ginger and add a few slices depending on the strength preferred.
For mint, add a small handful of freshly picked, washed mint leaves.
For a spicy flavour, add a combination of cloves, star anise, 2-3 per jar. Vanilla can be added as well. 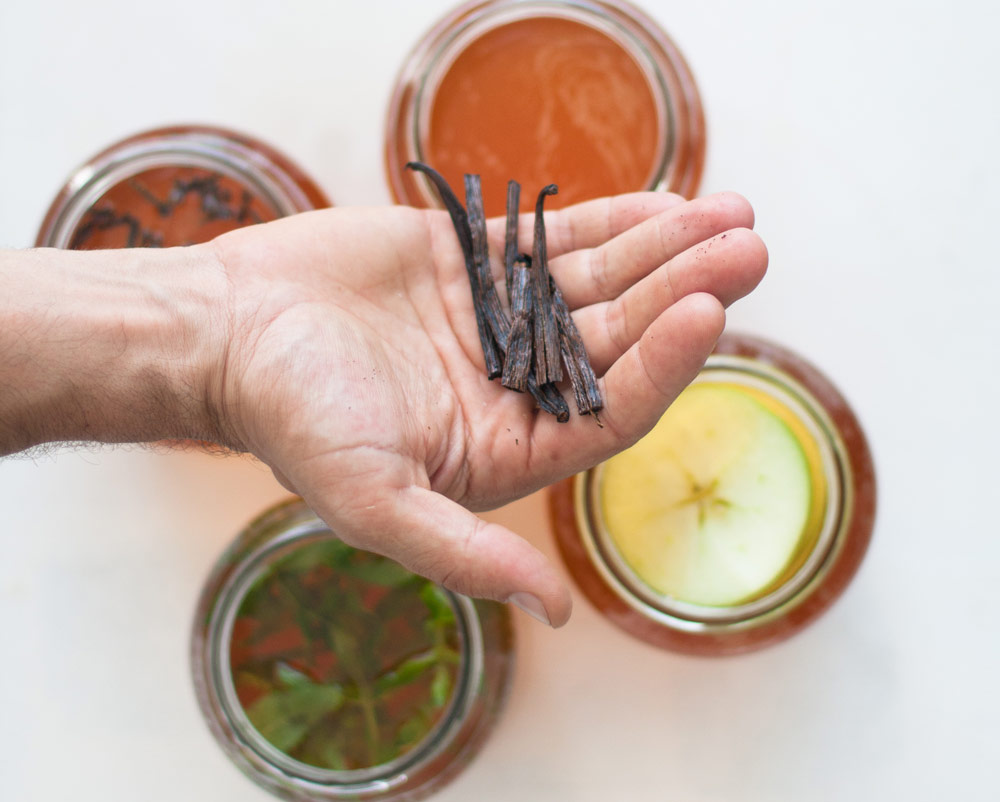 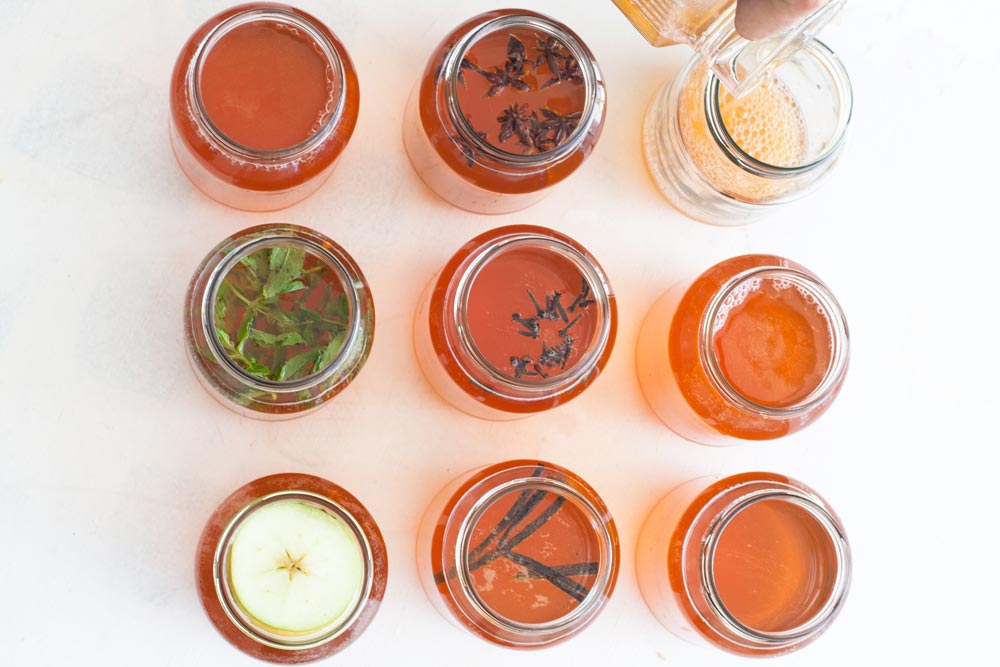 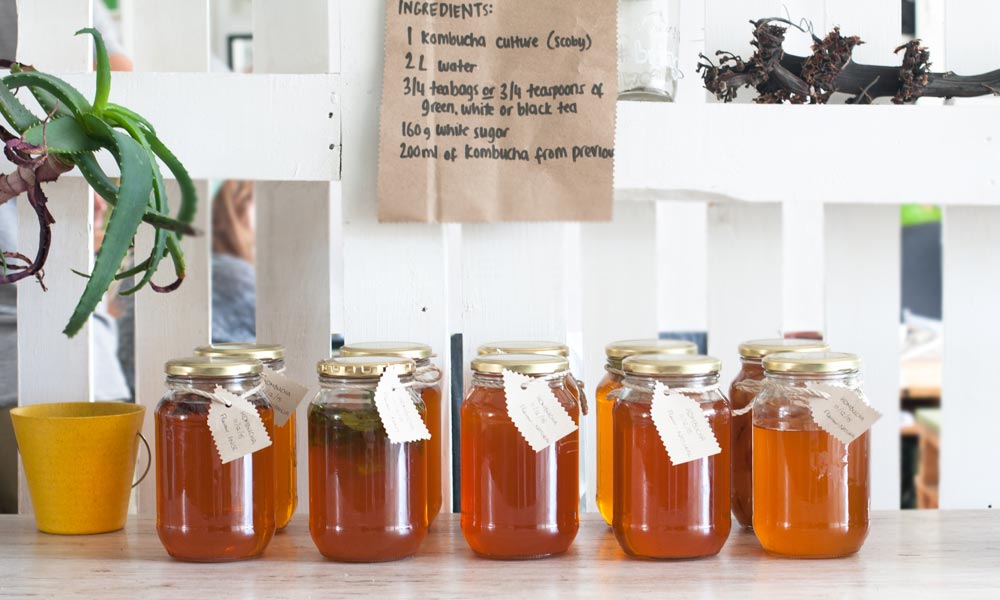 Seal with a proper lid, label with the flavour and the date of brewing and then refrigerate so that the flavours infuse. Drink and enjoy all the healthy benefits that Rooibos Kombucha has to offer!

With thanks to our friend and neighbour Misha O’Dale from Greenpop for showing us how.