The Cape Winemakers Guild Protégé Programme, a trailblazer for transformation in the wine industry by mentoring and empowering aspirant winemakers and viticulturists, celebrates its 10th anniversary this year.

Driven by a single minded vision to bring about transformation in the wine industry, the mentorship programme was founded in 2006 with the first protégé recruited in 2007. Over the past 10 years, a total of 20 talented protégés have come through the ranks, honing their skills while enjoying the rare opportunity of rubbing shoulders with giants in the industry. To date no less than 12 former protégés are pursuing promising careers in the wine industry – from private wine estates to larger corporate wine companies.

“The Cape Winemakers Guild is passionate about transforming our industry through cultivating and nurturing young winemakers of excellence. This is an ongoing process that needs to be supported by the wine industry. After ten years of the Protégé Programme we can look back at our success and say a job well done. This is, however, only a start and it is wonderful to see the support from our winemakers and our sector as a whole to change our industry today for tomorrow,” says Louis Strydom, chairman of the Nedbank Cape Winemakers Guild Development Trust.

Nedbank has supported the Protégé Programme from the onset: “Skills development forms part of Nedbank’s key strategic pillar as we believe that it plays a critical role in the socio-economic transformation of our country. It is against this backdrop that we continue to embark on this up-skilling journey designed to afford young individuals an opportunity to not only be exposed to the wine industry but to also acquire skills that will allow them to be key players in this sector,” explains Lindiwe Temba, Executive Head for Corporate Social Responsibility at Nedbank.

Whilst the bulk of the funds for the Protégé Programme are raised by the members’ various charity auctions, other sponsors include Amorim Cork, the Cape Cooperage Group, African Cellar Suppliers, Vinpro, Consol Glass, Hofmeyr Mills Auctioneers, Francois Naude, Cape Wine Auction and the Hermanus Music Society. 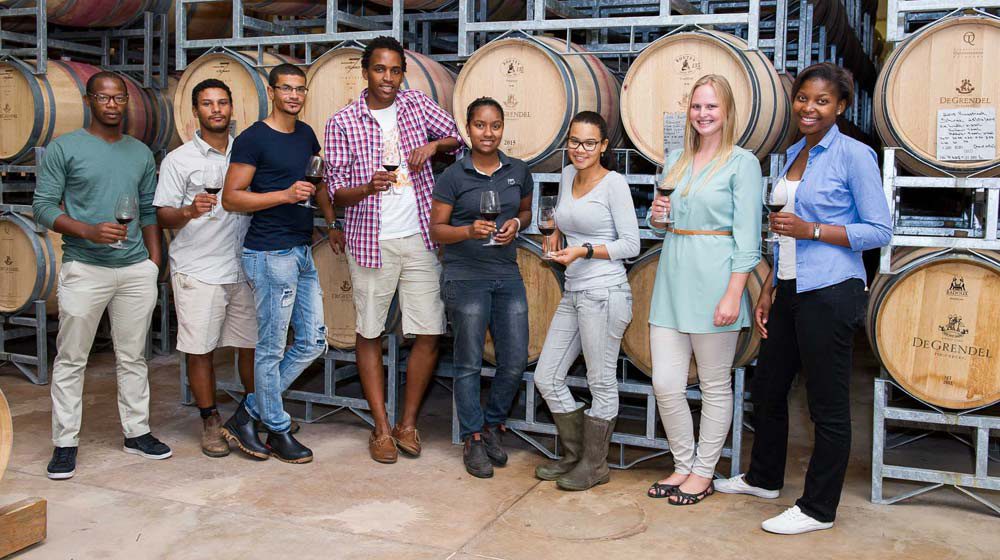 The Protégé Programme started out as a four year skills development initiative for oenology graduates, but was changed to a three year internship in 2009. In 2014 the programme was extended to give cellar workers access to formal training and education through a partnership between the Cape Winemakers Guild and Wine Training South Africa (WTSA). 2015 saw further expansion of the Protégé Programme into the vineyards, with the enrolment of the first viticulture protégé.

Over the span of the internship, each protégé is assigned to work alongside one of the members of the Guild for a one year period. During this year they are given first-hand experience of the inner workings of the cellar. During the course of their internship, every protégé is mentored by three members of the Guild. Over and above working in some of the most acclaimed cellars in South Africa, protégés are given ample opportunity to enrich their winemaking experience even further – from annual exchange programmes to some of the world’s famous wine regions, to being judges at various wine competitions.

“Over the three year period, the Protégés have the opportunity to develop their skills while being exposed to different terroirs and styles of wine. This gives them invaluable experience and a firm foundation upon which to build their careers,” adds Strydom.

Making their own wine is a requirement in their second year and enables the protégés to give back to the industry when the wines are auctioned at gala dinners and at the silent auction at the annual Nedbank Cape Winemakers Guild Auction. All funds raised by the protégé wines are ploughed back into the Protégé Programme, thereby completing the circle of supporting the development of future winemakers and viticulturists. The 2016 Nedbank Cape Winemakers Guild Auction takes place at Spier in Stellenbosch on 1 October.

For more information on the Guild, call 021 852 0408 or send an email to info@capewinemakersguild.com. Oenology and Viticulture students interested in applying for the Protégé Programme can visit the Guild’s website.

More about the protégés currently enrolled in the programme:

Rose is spending her final year in the Protégé Programme under the watchful eye of Abrie Beeslaar at Kanonkop in Stellenbosch. She believes that she has gained a tremendous amount of valuable knowledge and skills during her internship. Earlier this year she passed the 2016 Michael Fridjhon Wine Judging Academy exam.

“I have learned to have pride in everything I do. After all our hard work, dedication and hours devoted to making wine, we get to see the fruits of our labour and how it blossomed,” explains Rose, who grew up in Drakenstein.

Wine enthusiasts can look forward to purchasing Rose’s Nevin Shiraz, named in honour of her father, at the auction week gala dinners and at the silent auction at the annual Cape Winemakers Guild Auction that takes place in Stellenbosch on 1 October this year.

With the guidance of her mentor, Charles Hopkins, Kiara crafted her own Shiraz earlier this year. Other highlights include presenting cellar tours and being an associate judge at the 2016 SA Shiraz Challenge.

“My hopes and aspirations going forward are to grow as a person as well as a winemaker. I want to strive for pure wines that express terroir and honest winemaking practices,” says Kiara who stems from Mitchell’s Plain.

Mahalia is spending her second year with Carl Schultz at Hartenberg Estate, where she has crafted a Shiraz as her protégé wine.

“Carl Schultz has played an important role in the making of my wine. He challenged me to explore and has inspired me beyond measure. I can always count on his guidance, knowledge and experience,” explains Mahalia, who moved to the winelands from Vosloorus in the East Rand.

Clayton is grateful to his mentor, Rianie Strydom of Haskell Vineyards, for teaching him wine lessons that he can forever build on as he progresses in the future. Her guidance also helped to shape his own Chardonnay.

“I hope my journey in the wine industry will be long and fruitful. I would love to establish a brand of my own,” muses Clayton, born and bred in Cloetesville, Stellenbosch.

In 2015, Logan enrolled as the first viticulture protégé. His second year in the programme was spent at De Grendel under the guidance of Charles Hopkins – recently he joined Graham Beck Wines in Robertson for his final year. Logan was fortunate enough to broaden his knowledge working with different cultivars and trellising systems this year.

Born and raised in Kylemore, Stellenbosch, Logan has always had a keen interest in nature which is evident not only in his academic career but also in his love of gardening. “I like working with plants because it’s all about patience. Mother Nature does most of the work and we wait while she creates life,” says Logan.

Banele, under the mentorship of Louis Strydom at Ernie Els Wines, is determined to learn all that he can during his time as a protégé.

“I believe the contacts and the experience that I will gain from the Protégé Programme will give me enough strength to venture out and start making my own wine,” says Banele who was raised in Khayelitsha.

For Sydney, who is mentored by Neil Ellis, making wine is a rare opportunity to create something unique.

“As a winemaker you get to impart a piece of yourself into the wine. It becomes a reflection of you as a person and is a very personal process, given all the blood, sweat and tears including the long hours we put in as winemakers,” explains Sydney, who hails from Mahwelereng in Limpopo.

This aspirant winemaker is spending her first year at Cederberg Cellars as part of the team headed by David Nieuwoudt. She has an absolute passion for making wine.

“I love nature and have always known that I want to pursue a career in this field,” explains Maryna, who grew up in Vredendal.