If you’ve ever watched an episode of Game of Thrones, you’ve probably heard the ominous phrase, “winter is coming”. It’s usually muttered by Jon Snow as he stares out at the frozen wasteland beyond the wall. Around this time of year in Cape Town, a similar thing happens as the Cape of Storms begins to muster. Instead of Jon Snow though, we’ve got every single person in Cape Town moaning about winter’s approach. And of course, it’s always going to be the coldest one yet. For me, I love this time of year because it’s the start of stew season.

Growing up I never really saw the appeal of stew. It just seemed like a bunch of stuff in a pot, but as I’ve gotten older, I’ve gotten wiser. A great stew can turn the toughest piece of meat into a snowflake-on-the-tongue experience. It’s an abyss of rich, meaty gravy with pops of silky veggies. Like any dish there are many ways to make a stew, but there aren’t many as good as a beef shin stew. If there were such a thing as a meat lucky packet, beef shin is it. It’s packed with meat and has a chunky marrow bone centre. It will change the way you look at cows so don’t be surprised, if you find yourself admiring the gentle curve of the next bovine shin you encounter. 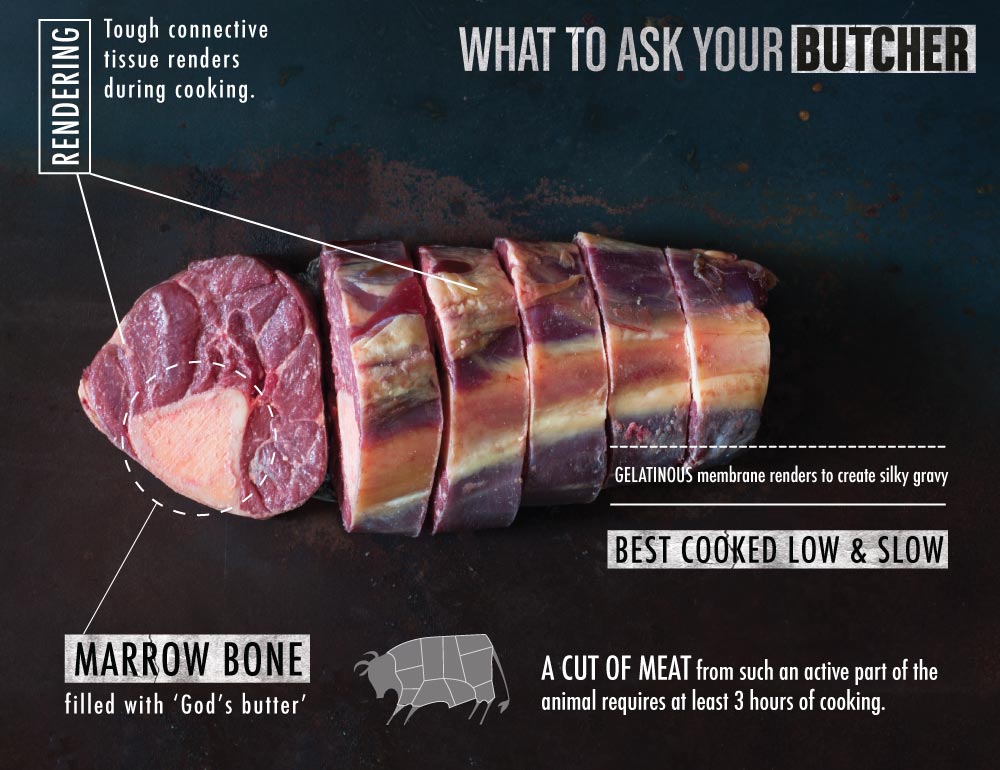 The shin is cut from the lower leg of the cow and as you can imagine it’s a very active muscle. It has a lot of connective tissue, and the meat is wrapped in a gelatinous membrane.  During the long cooking required for this cut, the tissue and membrane breakdown to create silky smooth sauce. There’s also the added bonus of bone marrow which adds even more buttery flavour and richness.

The shin really is the cadillac of slow cooked cuts. It has a massively beefy flavour and it’s still relatively cheap. Back in the day it was considered a cut for the poor, but I bet the poor suckers eating it weren’t complaining.

For my stew I am going full flavour in everything. I want a stew so full of beefy and umami goodness that my tastebuds moo in satisfaction. To achieve this I’ve got heavy hitters like bacon, mushrooms and anchovies. Bacon because bacon, and mushrooms and anchovies because they contain glutamate, an amino acid that boosts the meaty flavour in food. I’ve also got bone marrow which was aptly labeled, ‘God’s butter’ by Anthony Bourdain, enough said. For gravy I want a deep, rich sauce, so I’m using a mixture of Guinness stout and beef stock. 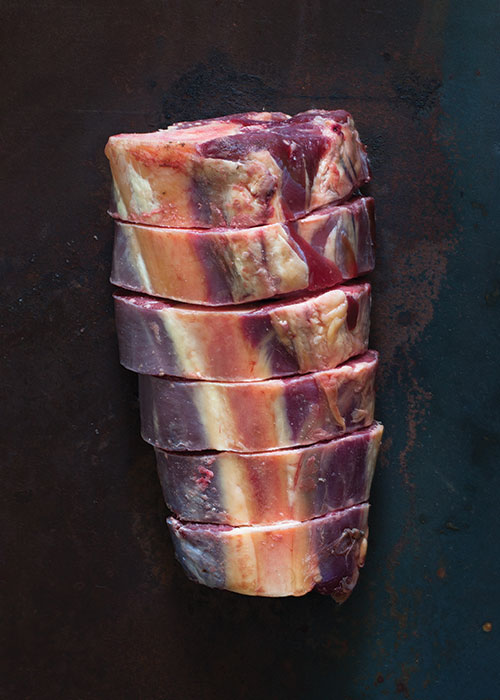 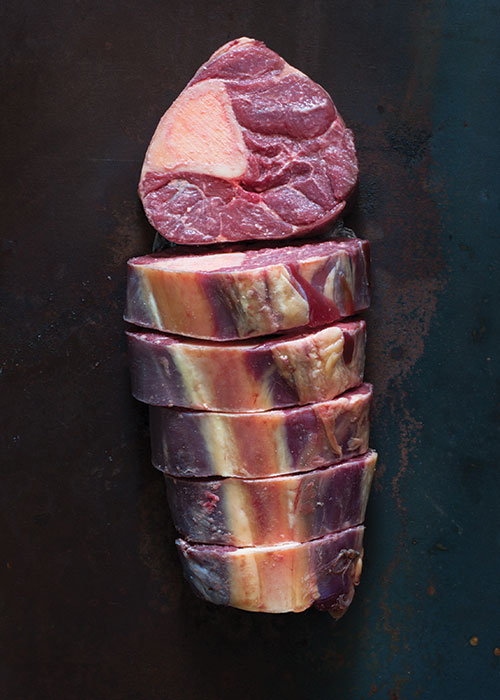 Just like onions and Shrek, great stews have layers. Every layer is a flavour opportunity so it pays to put in some effort. Probably the most important layer is searing off the meat to start. Think about it, the best part of a juicy steak is the sear on the outside. The same applies here. Searing the meat off gives the caramelised flavour crust and the best possible start to the stew. Next up is the onions, once again, frying them until golden gives them a sweeter taste, and adding bacon to the mix gives it a salty, porky punch. From there we make a paste from the garlic, anchovies and tomato purée. Instead of adding it raw, we fry it to release the flavours and aromatics. Lastly we roast the marrow bones before tossing them into the pot to simmer and render out. As the layers build so does the overall flavour of your stew.

To go with the meat shin-dig, I’ve whipped up some Irish taters to honour the Guinness gravy. Colcannon is basically mashed potato with spinach, cabbage or kale, and some other odds and ends. It looks sexy and you get to sound all worldly when say to your friends, “oh this? it’s just some Colcannon that I whipped up”. That brings us to the end of this meaty adventure. I hope you’ve learnt something new and are planning your stew for the next rainy day. Until we meat again, cheers! 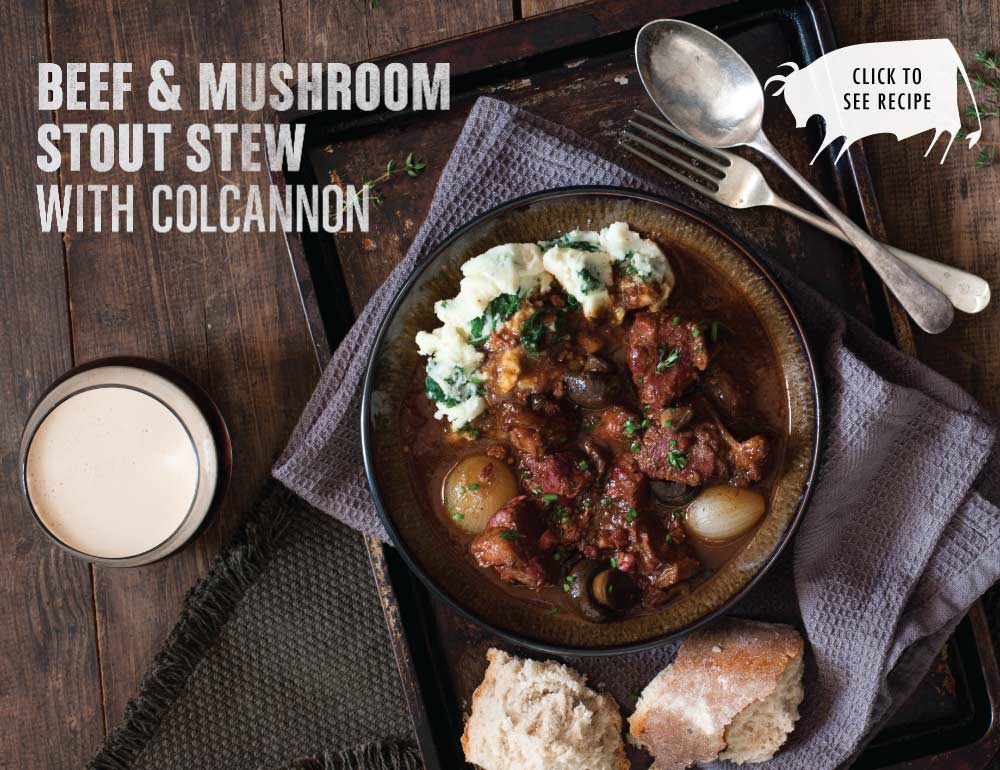 The Stew
Combine the chopped garlic, anchovy and tomato pureé in small bowl and set aside.

Fry the onions in a medium sized frying pan over a moderate heat for 5 minutes. Then add the diced bacon and fry until the onions start to get a golden colour and the bacon is cooked. Take the pan off the heat and set aside.

Carefully cut the meat from the bones and dice into cubes. Trim and discard any large pieces of fat. Set the marrow bones aside for use later. In a large cast iron saucepan (Dutch oven) or casserole dish heat a tablespoon of oil over high heat. Individually place the chunks in the saucepan without touching each other. Sear the meat on all sides until it has a crust. Use a pair of tongs to rotate the meat rather than just stirring it with a spoon. This step is crucial to building flavour in the dish. The crust is what gives the meat flavour, it’s the same principal as cooking a steak. Do this in batches and don’t overcrowd the saucepan.

Line a baking tray with foil and place the marrow bones on the tray. Roast in the oven for approximately 15 minutes. (The fat in the marrow bones will start to render slightly, this can be poured into the pot from the tray).

When the last batch of meat is seared, add the rest of the meat back into the saucepan, along with the onion and bacon mix, and the garlic, anchovy and tomato mixture. Stir fry for 1 minute until fragrant then add the flour. Stir fry for another minute to cook the flour. Add the beer to deglaze the saucepan and stir to scrape off any bits that are stuck to the pot.

Next add the stock, thyme, bay leaves and marrow bones, ensuring that you add any rendered marrow bone fat from the tray as well. Turn the heat down to a simmer and place the lid on the pot askew. Let the stew simmer for 2 ½ hours and stir occasionally. At the 2 ½ hour mark, stir in the chutney, and then add the baby onions and mushrooms. Replace the lid askew and simmer for another 30 minutes. Check the onions, if they are still a little firm, continue to simmer for another 15-20 minutes. Season to taste.

The Colcannon
Boil the peeled potatoes in salted water in a medium size saucepan over high heat for about 15-20 minutes or until soft. Drain well using a colander, and then return the potatoes to the pot over a medium heat for about 3 minutes. Stir the potatoes in the pot with a large spoon to break down. Any remaining water will cook out during this process (water makes for soggy mash and no one likes that).

Remove from the heat and add the butter, cream and mustard. Mash the potato until the desired consistency is reached. I like mine a little chunky.

In a large frying pan heat a splash of olive oil and add the spinach leaves. Wilt the spinach for a minute or two and then remove from the heat. Tilt the pan and use a large spoon to compress the spinach to get rid of excess moisture. Fold the wilted spinach and spring onion into the mash then season to taste.

Serve the colcannon topped with a generous helping of beefy shin and mushroom stew.

See other recipes in the Meet the Meat series 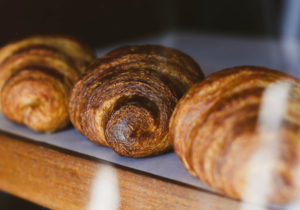 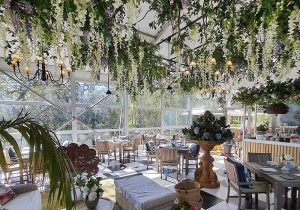