A Day in the Life of Chef Stephen Fraser at Lanzerac

Executive chef at Lanzerac, Stephen Fraser, heads up the kitchen of one of South Africa’s oldest landmark estates seemingly with ease. This must be, in part thanks to his energetic nature, and part experience and training alongside great chefs, like Michel Gehrig and David Higgs.

From the Sports-field to the Kitchen

Having started out in the kitchen in his hometown of Cardiff as a teen, under the watchful eye of Gehrig, Fraser then followed the renowned chef to open The Trafalgar in London, and later Kempinski St. Moritz in Switzerland.

“Growing up I was sports mad – it was a great way for me to channel my energy and I really thought I’d end up playing professionally later in life,” he tells me.

But a leg injury in my late teens put paid to that, unfortunately, and a career counsellor advised that he look into catering or cooking, as a similarly fast-paced and energetic profession. 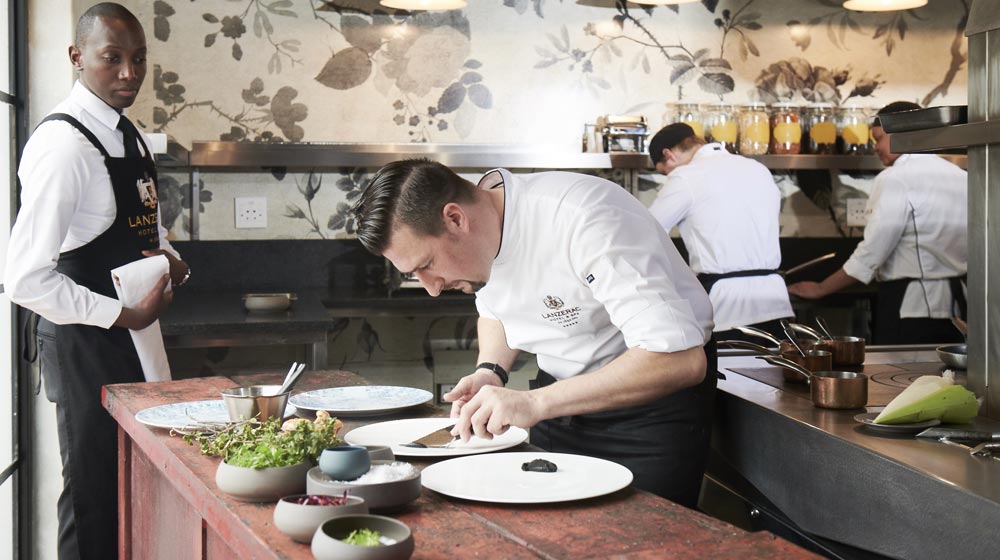 The Beginning for Chef Stephen Fraser

Fraser heeded the advice and pretty much immediately became hooked on being in hospitality once he started at Hilton Cardiff, just after school. But it was one small encounter that took his interest to the next level.

“The Head Pastry Chef – a South African woman who put the fear of God in me [laughs] – questioned my setup of the breakfast buffet one morning, asking me why I had arranged it the way I had,” he explains. “I replied to her that that’s the way I had been shown to do it. And she said something along the lines of, ‘well why don’t you do it your way?’ and that just completely changed the game for me. She assisted me, we rearranged things, we created a whole new layout. And from that moment on, my passion for cooking and being a chef was fueled – once I realised that I could inject my own personality into what I was doing, and take ownership, the game changed.” 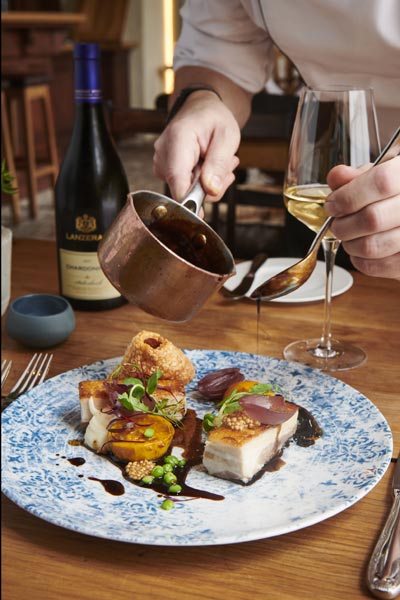 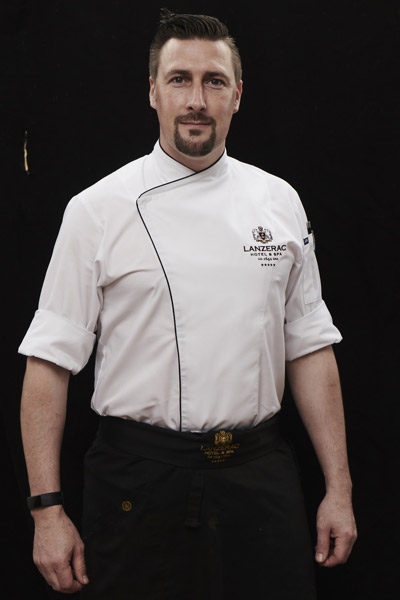 Fast forward a few years – subsequent to London and Switzerland – and Fraser found himself in Cape Town, South Africa, where he had longed to work and play for some time. Following a few visa issues, he found himself under the wing of celebrated South African chef David Higgs, and the two worked together for many years.

From iconic Leinster Hall in the Cape Town CBD (now home of The Stack) to the kitchens of Meerendal Wine Estate, the duo worked well together and almost set up their own restaurant, but at the time things just didn’t pan out that way.

One thing led to another and Fraser eventually found himself at Lanzerac.

“Before starting, I decided to go for dinner as a ‘mystery guest’, to get a feel for the cuisine on offer and to see what the kitchen was producing,” he explains. “Let’s just say it wasn’t my finest dining experience by a long shot. There was a lot of work to be done. A lot. My challenge was cut out for me!” 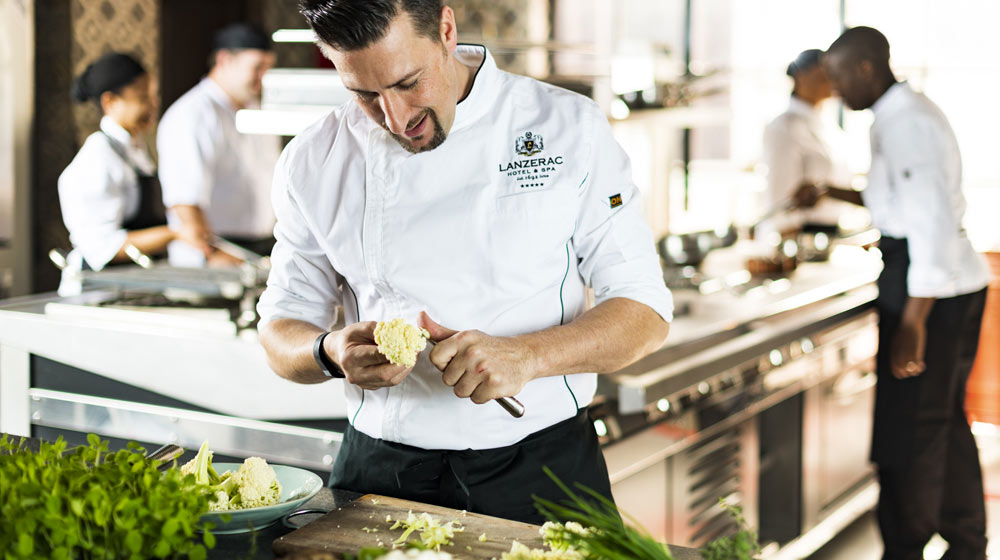 Challenging as it may have been, Fraser has taken Lanzerac’s culinary offerings to an extraordinary level, not only at the hotel’s restaurant, Manor Kitchen but throughout the Lanzerac estate, including the Taphuis, Lanzerac Deli, Craven Lounge and the Vitality Corner at the spa.

A Day in the Life of a Chef

This leads us into the age-old question: ‘what’s a typical day like for Stephen Fraser at Lanzerac?’ And, of course, there’s no typical day in the life of a chef. 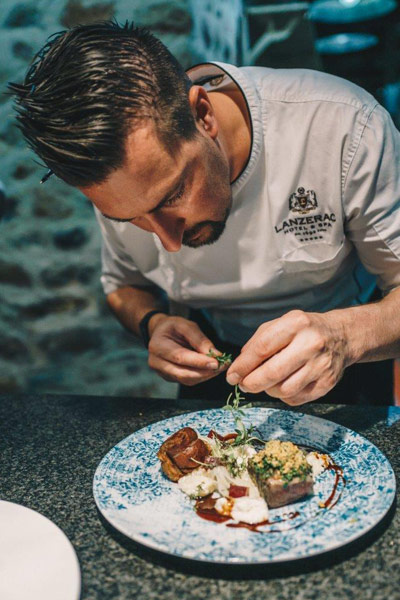 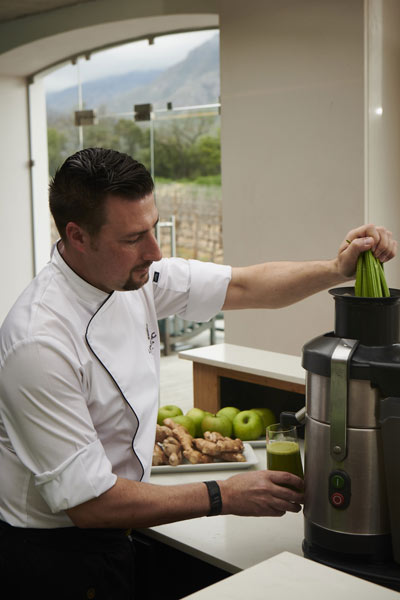 “No two days are the same, but I do have a basic routine that I generally follow,” Fraser says.

“I get to the estate at around 8 am each morning and my first goal is to check in on each venue, starting with the main kitchen at Manor, where breakfast is served and generally a very busy time. I oversee the team and if it’s super busy I jump in and help on the pass, otherwise, I head to the Deli next. I look over the displays, check the quality of the breads and pastries, make sure everything is under control. The deli gets really busy, especially on the weekend – we can serve up to 250 covers, so everything has got to be right. After that I head to the spa, where we have our Vitality Corner menu, serving super-fresh juices and smoothies, and healthy options like wraps and salad bowls.” 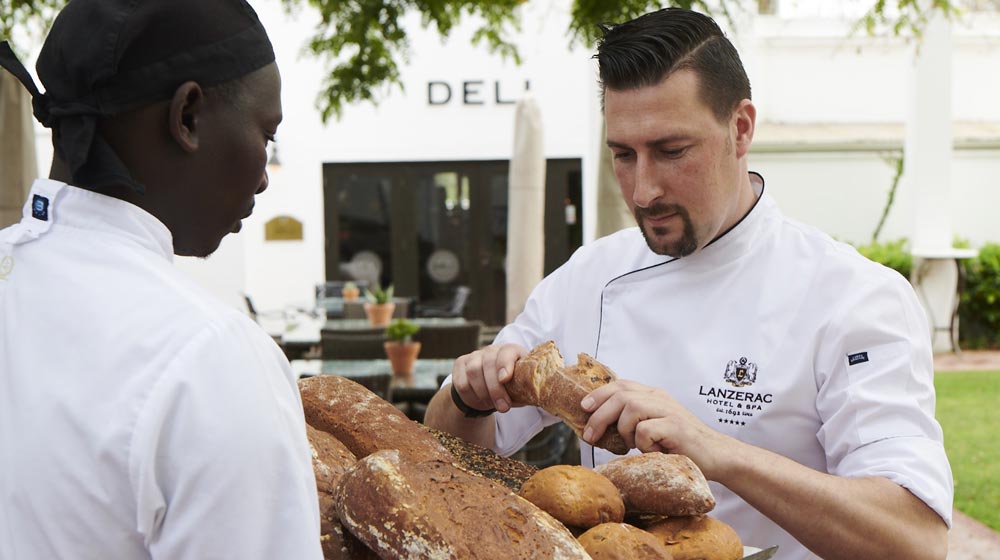 From around midday, Fraser works on menu planning and recipe development, reports, orders and other admin, before heading back to the main kitchen to oversee lunch service.

“We usually have a 3 pm meeting, and after that, I take a break. I often disappear into the mountains for a jog. This area is so beautiful and it gives me a chance to just clear my mind for a while. I get back at around 6 pm, to take over the pass for dinner service. Once all of the main courses are out, I will take a walk through the Manor Kitchen and Taphuis to speak to all the guests and collect any feedback or commentary they may have. After this, I will run through the next few days events with my chefs, check for any special requests and place any orders with my suppliers for delivery.”

It’s a good thing that Fraser cannot sit still because his schedule is full-on.

“I definitely get my steps in each day,” he laughs. 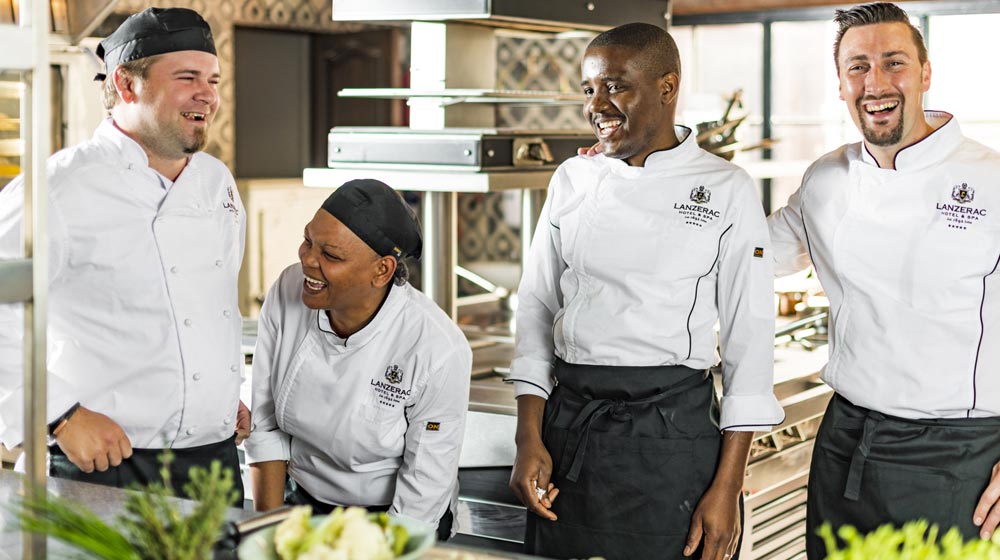 When asked what we can expect for the new season’s menu, Fraser replies:

“Ah, I can’t reveal too much just yet, but I do think the duet of lamb, served with fresh minty pea mousse, salted yoghurt, and pickled radish is going to be a winner.”

We’ll have to wait and see, but there is no doubt that the menu will be superb.