If you’re into trying new craft beers then you’ve stumbled onto the right list. Not only do we recommend these places for their amazing craft beer, but also for their tasty food and vibey atmosphere.

Banana Jam Café
Banana Jam Café welcomes patrons with a warm island embrace. If you feel like taking a break to somewhere tropical but can’t afford the plane ticket, hit up this local fav.

Grub
The menu consists of tasty Caribbean-inspired dishes, which ties in very well with the overall laid-back Jamaican vibe. The Crazy Goat Curry is a good option if you are looking for a slightly left-field option. The Pineapple BBQ Ribs are an old favourite among regulars, with a nice sweet twist in the form of the sticky pineapple BBQ sauce. They cater for vegetarians with a tasty veggie burger or the Roast Veg Pasta Salad, you can also opt for gluten free pasta for R8 extra.

Beer
Banana Jam Café has 30 different craft beers on tap and 80 craft beers in the bottle to choose from. The range of beers is ever-changing, so there’s always something new to try out. The Aegir Project Red Rye is a rye beer with a twist. The Rogue Hazelnut Brown Nectar is an imported, multi-award winning beer (73 awards between 1996 and 2015) that won’t disappoint. If you’re looking for something a little sweeter, you can’t go wrong with locally-brewed Eversons Cider. It is the only genuine apple cider on tap in South Africa. Harviestoun Schiehallion Lager is a great sessionable beer.

Did you know? Banana Jam Café has their own ‘nano brewery’ called The Afro Caribbean Brewing Company. They claim to make the coolest craft ales this side of the Caribbean and we believe them.

The Taproom at Devil’s Peak Brewery
Devil’s Peak brewery is situated in the shadow of Devil’s Peak in Salt River, a mere 5 minute drive from the city centre. This brewery was established from a real love of beer and the need for exciting and alternative brews.

Grub
There’s a wide selection of food to be enjoyed but their unique cheeseburger is a must. If you want a somewhat lighter meal you should opt for the ultimate grilled cheese sandwich. Feel like a kid again by finishing off your meal with a nice old-fashioned ”Gelatine and ice Cream” (jelly and vanilla ice cream).

Beer
The Taproom’s drinks menu has three categories – craft beers, speciality beers and ciders. First Light is a must, as well as the Pale Ale. The Taproom has only two speciality beers; these are significantly more expensive than the traditional craft beer selections but are well worth the money. They are made in very limited numbers and are therefore very exclusive. Try the Vin de Saison – a beer and wine (20% Chenin Blanc) hybrid that has a very unique taste. 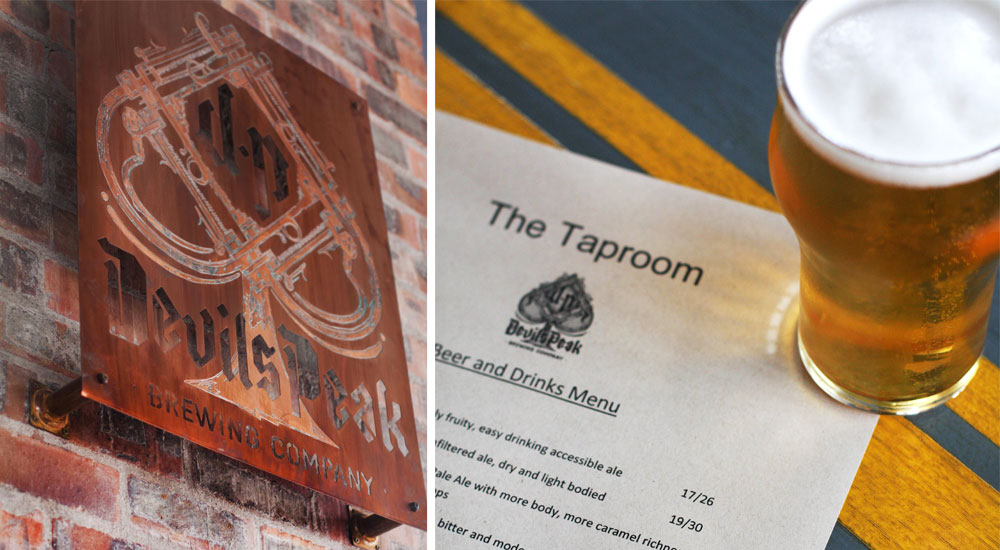 The Beerhouse, situated in Long Street, has one of the biggest selection of craft beers in the country. They have a wall of 99 beers just waiting to be tasted. They also have great food to choose from that will be a hit with any beer drinker.

Grub
There are so many great food options that will all be good washed down with an ice cold beer. Pick any of the choices on the Flammkuchen menu and you won’t be disappointed. These pizzas are made with a very thin beer-dough base accompanied by a hint of creme fraiche, they are crispy and delicious. If you want to try something different, the currywurst is a must. This German street food-style dish of pork bratwurst topped with curried tomato sauce, is a hunger buster of note.

Beer
The Beerhouse has 99 different beers to choose from, which includes a wide range of international beers, as well as many South African craft beer options. The Apollo Blonde is a relatively light beer at 4.5% alcohol but it is a great way to start off your beer drinking adventure. Woodstock Californicator and Red Sky Vampire are also must tries. If you prefer a sweeter tasting beer you can’t go wrong with the Liefmans Fruitesse from Belgium. The Beerhouse offers you the option to order beer in four different quantities – 120 ml, 250 ml, 500 ml and 1 litre.

By buying a CBC (Cape Brewing Company) beer at the Beerhouse you contribute to the #PintForAPurpose initiative that aims to provide food for people in shelters and soup kitchens in Longstreet (CPT) and Fourways (JHB).

Hello Sailor Bistro
This small venue is situated in a very vibey part of Lower Main Road, Observatory and features many characterful original features like the old wooden shop windows at the entrance. Great food and beer with the added bonus of great music is what awaits those who venture into this unassuming little eatery.

Grub
Hello Sailor Bistro has a relatively small selection of pastas, salads, burgers and sandwiches. The rump steak prego topped with a soft fried egg on a toasted ciabatta is a great sandwich. The salad with roast butternut, feta and toasted seeds is a tasty vegetarian option.

Beer
They have a small craft beer selection but a good selection nonetheless. There are well-known favourites from Devil’s Peak Brewery and CBC (Cape Brewing Company) but if you are feeling adventurous the Loaded Canon beer, with 10% alcohol, is well worth a try. If you are looking for a more easy-drinking beer then you can’t go wrong with Jack Black’s Pale Ale.

The Slug & Lettuce
The Slug & Lettuce has eight venues throughout the greater Cape Town area; we really love the on situated at The River Club in Observatory. The venue is nestled along the Liesbeek river and offers a cool indoor-outdoor dining experience. You’re surrounded by lush greenery, which makes you feel like you’ve been temporarily transported to a place far away from the city bustle.

Grub
The Slug & Lettuce has an impressive and comprehensive selection of food to choose from, including seafood, grills, pizzas and more. The Mussel Pot is very tasty if you like seafood. For the meat lovers try the 500 g pork spare ribs, or their award-winning beef burger. The Salmon Salad is a great option if you prefer a slightly lighter meal.

Beer
The Slug & Lettuce has a very limited selection of craft beers but that doesn’t make them any less good. The Mountain Weiss is a beer that is brewed in a traditional Bavarian style with hints of banana in the palate. If you want something completely different you should opt for the Lakeside American Pale Ale. 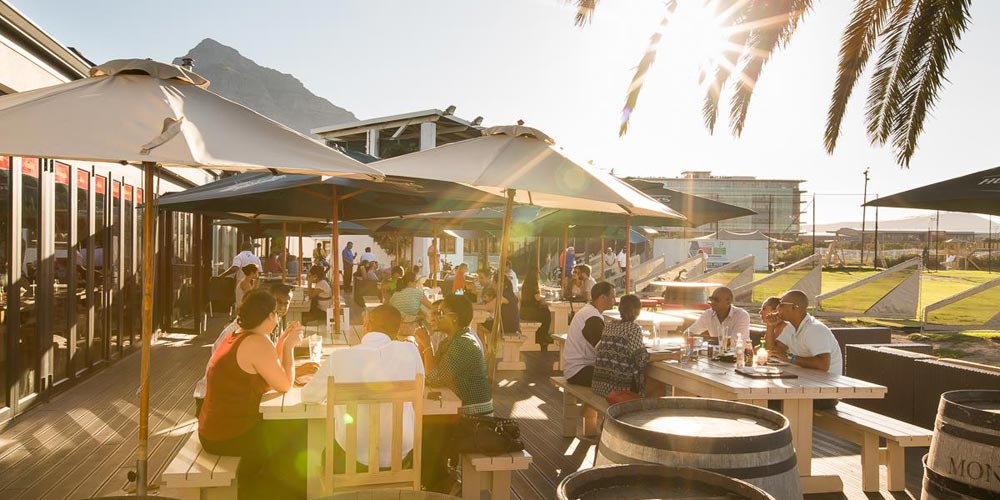 Check out spots in Durbs