Talking All Things Beer, Food and Fire with Beer Country

Karl Tessendorf and Greg Gilowey are the guys behind Beer Country and Beer Food Fire, an epic new cookbook that marries those three things together in the most delicious way. We sit down and chat to the guys to find out more about how the book came about, what happened at #Boeriegate and how you make unicorns into braai spice. 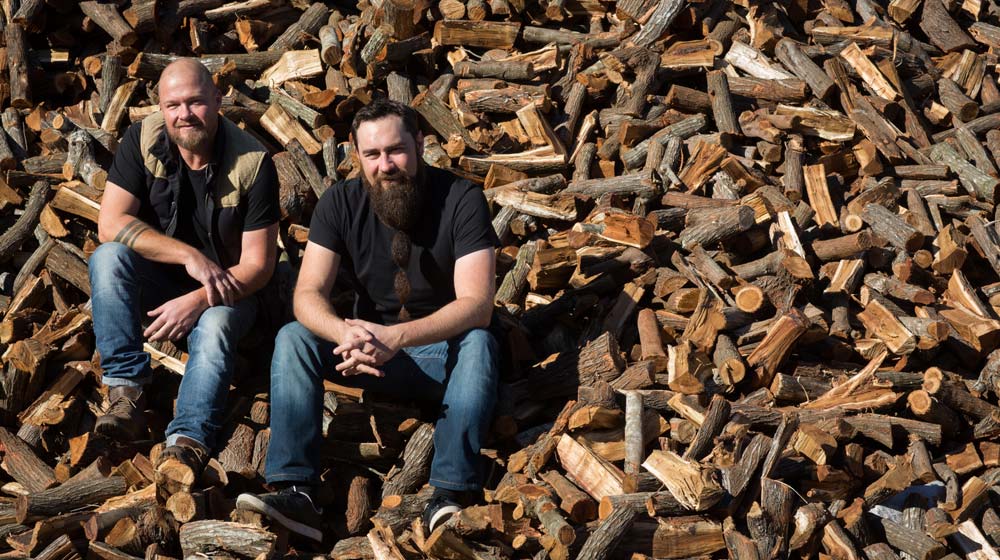 We’re guessing the answer to this question is ‘one night around a fire’ but tell us how the idea of the book came about?

Karl: That’s what it says on the back cover but actually, the two of us are worse than useless at remembering our own recipes so we thought, let’s write a book. At least they will all be in one place. Just kidding, but not really. It’s something that we’ve always wanted to do since the very beginning. I’m so stoked that it’s happened and we could not have asked for a better result.

Greg: Well, since filming Beer Country, we have spent a lot of time around the fire cooking some epic fire-food. We had built up an insane collection of tasty recipes and it felt wrong to keep them all to ourselves. Sharing is caring. 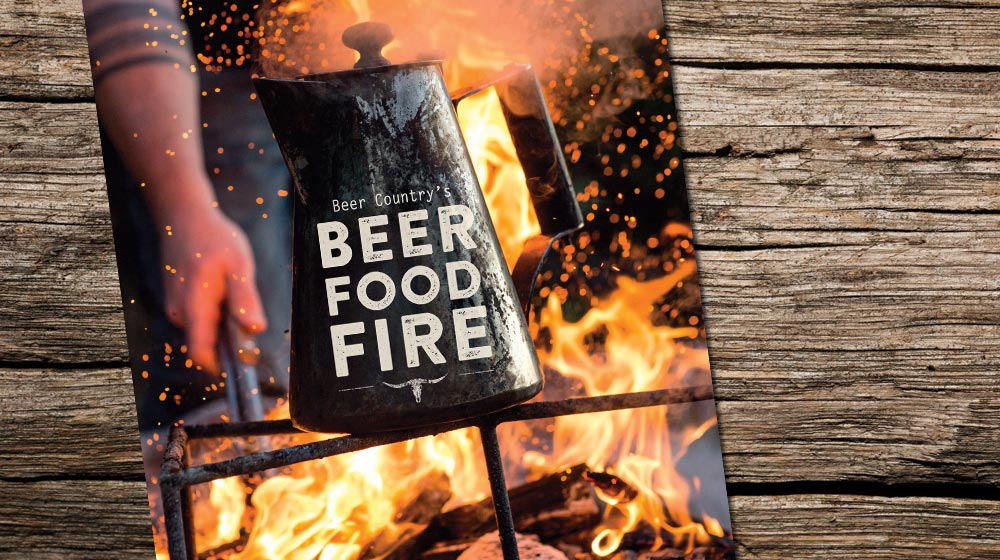 When you decided to do a book, was the concept a no brainer from the get-go?

Karl: The book is kind of an extension of the TV show so the beer, food, fire thing has been set in stone for a good 5 years now. The book has enabled us to refine recipe ideas, beer pairings and it also opened us up to the possibilities of cooking with beer and beer ingredients.

Greg: Well, we learnt the hard way when filming Beer Country, that you stick to what you know, or risk looking like a tjop. So, once the book idea had its hooks in, it was only ever gonna be about beer, food and fire – it’s who we are, it’s what we do, and it’s what we love. 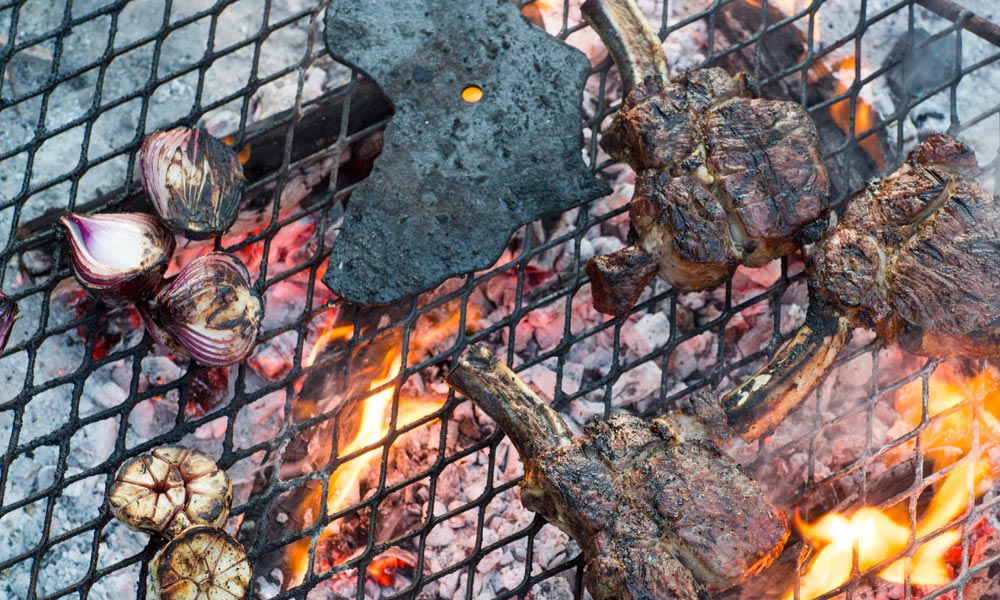 What makes Beer Food Fire different from other braai cookbooks?

Karl: Haven’t you heard? It’s the best one ever written… just kidding. There are a lot of braai books but there are no beer and braai books and that’s what makes this special. Beer and braai are about as South African as you get and we have taken a deep dive into why beer works so well with braai chow.

There is also a whole section on using beer ingredients like malted barley, hops and of course beer itself in cooking. Our beer condiments section is something that hasn’t been done in South Africa before.

Greg: It’s life’s greatest gifts, all together for the first time, sandwiched between two covers like the tastiest braaibroodjie you never knew you needed. There is something in there for everyone, from first-time craft drinkers to beer geeks, and from once-a-month braaiers to seven-days-a-week braai masters and braai mistresses. 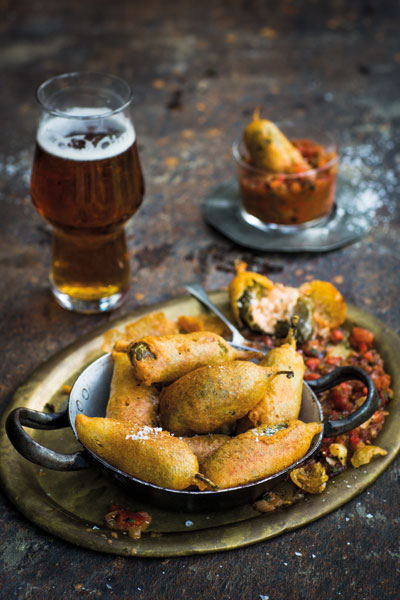 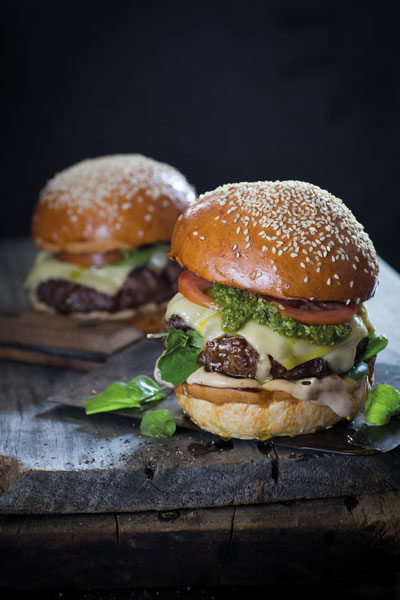 Biggest learning from shooting a cookbook?

Karl: Sheesh, there were a couple. Shooting in winter is not the best idea because we were using all natural light and the sun rises late and sets early. We really had to push hard to get the mountain of shots done per day. Also, don’t settle for something if you are not happy with it. The shot will bug you for eternity. And lastly, cooking nearly everything on fire all day can make for an expensive wood and charcoal bill!

Greg: It’s like braaing chicken – just when you think you are done, you still have a while to go. Having a kick-ass team of passionate people backing you up is a must. It’s long, it’s rough, it’s tough but that said, when you hold your book for the first time, it is so very worth it.

Biggest fail or funniest moment on the shoot?

Karl: We had a baking powder issue, which was more of a fail but we managed to work it out. There was also #BoerieGate, which I am sure Greg will elaborate on.

Greg: Boerewors rolls are not the most beautiful things to shoot. We were done for the day, we had ticked all the boxes. Then checking out the final shots, we realised the one wors roll looked slightly off, a bit left field, a little weird… and then it hit us, it looked like a big willy! Once seen, it couldn’t be unseen, so needless to say it needed a reshoot. The funniest fail we had in a while. 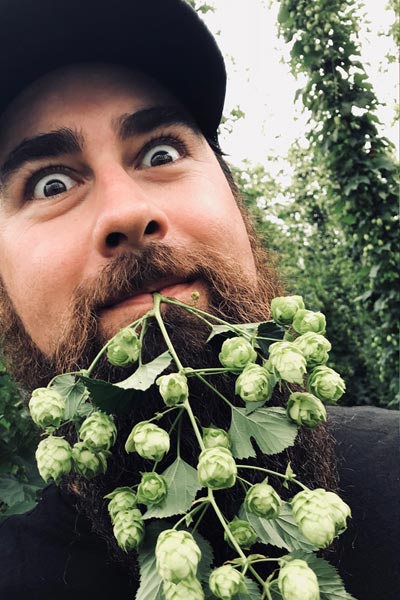 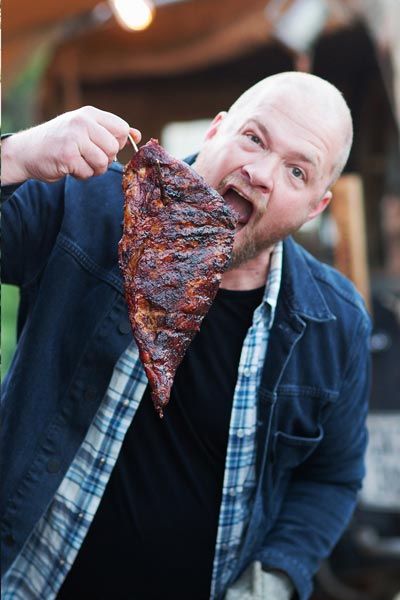 Favourite recipe from the book and why…

Karl: That’s a tough one because it keeps changing. We’ve been on a smoked chicken and white BBQ sauce binge lately but I am sure it will change soon!

Greg: It changes daily, but at the mo, we are cooking the smoky chicken a white BBQ sauce, like a lot. It is so different, and just so damn tasty. Also, with summertime still in full swing, the yellowtail ceviche as a starter is next level yummy.

Why is cooking over coals so magical?

Karl: There are so many reasons but I suppose the most important is that it makes food taste better. The simplest way to test this theory is to make a piece of toast in the toaster and then make a piece on the braai and you tell me which one tastes better.

Greg: It’s tattooed onto our DNA. Its’ the delicious combo of smoke, caramelisation, and char. It’s using fire as an ingredient not just a heat source. You know, most people mistakenly think there is a pot of gold at the end of the rainbow…there really isn’t. There’s a braai, and everyone’s invited! 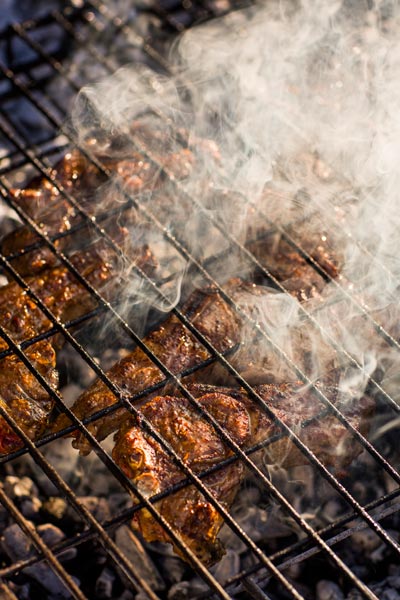 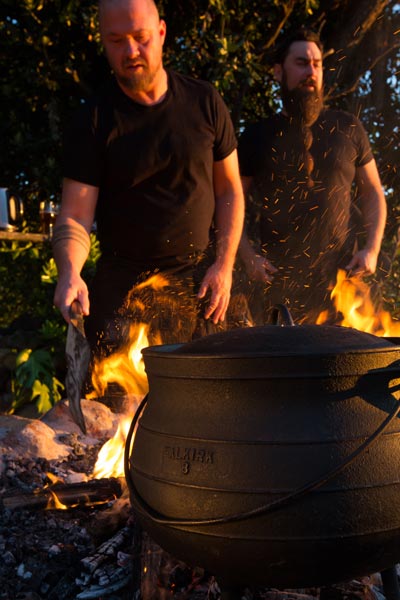 Karl: It does because it comes with extra love, gees and magic.

Greg: If you treat your potjie right, definitely. But it’s not just about how it tastes, it’s about how it feels to slow down, light your fire and solve the world’s problems while listening for the potjie whisper, beer in hand. Cooking in cast iron is good for the soul.

How has the craft beer industry in SA changed in the past few years?

Karl: It’s been a busy few years since we shot Beer Country Season 1. Big strides have been made in the quality and consistency department. We’ve seen a few big brands making big plays on the business side of things.

We’ve got more styles and out there beers than ever before and we now have a Craft Beer Association of South Africa to give brewers a unified voice. It’s exciting times but still tough times due to South Africa’s current economy.

Greg: That’s a big question, with an even bigger answer that could be a whole separate article. Things have definitely slowed down a bit, with the guys and gals realising what it takes to open a brewery compete in a tough-as-nails market. The other side to that coin is the breweries that are still playing, are in it for the long haul, in it to win it, and making exciting, world-class beers. 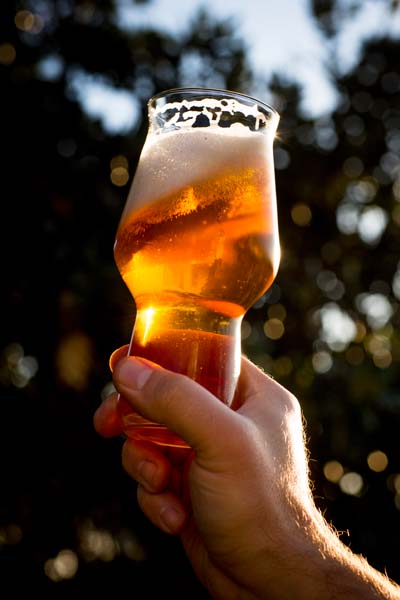 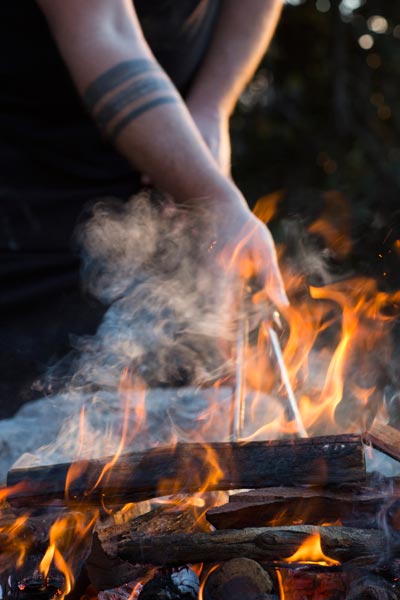 Where do you see it heading?

Karl: The next few years will be interesting. I think the guys and gals that are going to succeed are the truly passionate people. It’s a tough industry and contrary to popular belief it’s not a money-making endeavour. As long as the beer drinking public want great beers, the industry will continue to chug along.

Greg: The craft beer industry is distilling like moonshine and maturing like whiskey. Things have been tough out there, but I reckon there is light at the end of the tunnel (not lite beer thank goodness), and with this little shake up, the beers on the shelf are better for it. Who knows, that elusive South African beer identity may just shake out in the brewhouse.

Why should people buy your book?

Karl: Because it’s the most awesome book ever? No, seriously, it’s full of recipes that are so damn delicious but they are easy and approachable. Cooking doesn’t have to be complicated to be delicious.

Greg: With Beer Food Fire, we are making the world a better place, one awesome braai at a time. We live in a crazy, wild-west, beautiful place and we need to support and have each other’s backs. Keeping things local and lekka around the fire has never tasted this good – Beer Country guarantee!

You guys make your own braai spice, can you tell us about it (and where to find it)

Its called Karoo Dust. It’s our deadly braai spice made from phoenix feathers, dragon’s teeth, fire and brimstone. It’s something that we were just initially making for ourselves on the TV show but our friends kept asking if they could buy some. So we packaged it up and boom! 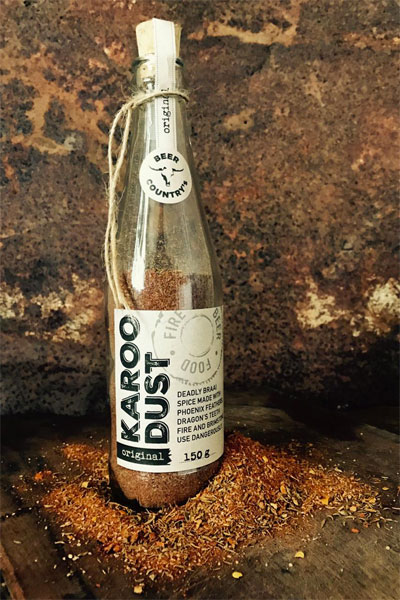 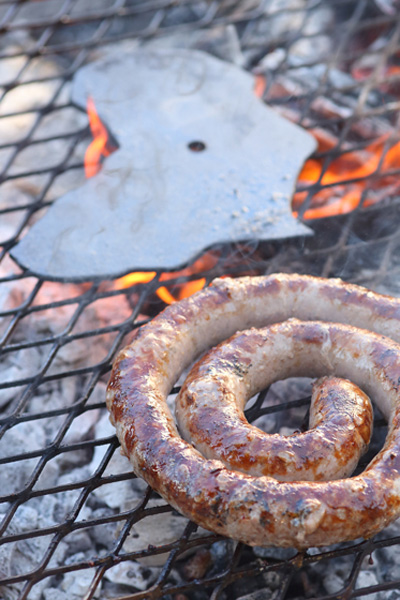 It’s the tastiest all-purpose rub you will ever use in your life. Its available directly from us (wholesale), and through a few niche retailers like the Olive Branch Deli, the Foodbarn, Biggest Little Beer Shop and Roeland Liquors. It’s our go-to spice and we smash it on everything – as it says on the bottle “Use Dangerously.”

See extracts from the book and enter to win a copy below.