What Exactly is Ramen PLUS a Recipe for Tonkotsu Ramen

When it comes to food trends, we’re used to seeing them come, bring the hype and then go, leaving a fond memory. Ramen, the traditional Japanese noodle soup, however, seems to be staying put and is transcending its trendy status. Frankly, we’re not surprised. A bowl of ramen is as near to the perfect dish as we think you can get. It has everything you need for a satisfying meal. From the rich broth, to the silky noodles and the crunchy veg, you won’t be left wanting after a hearty bowl of ramen. 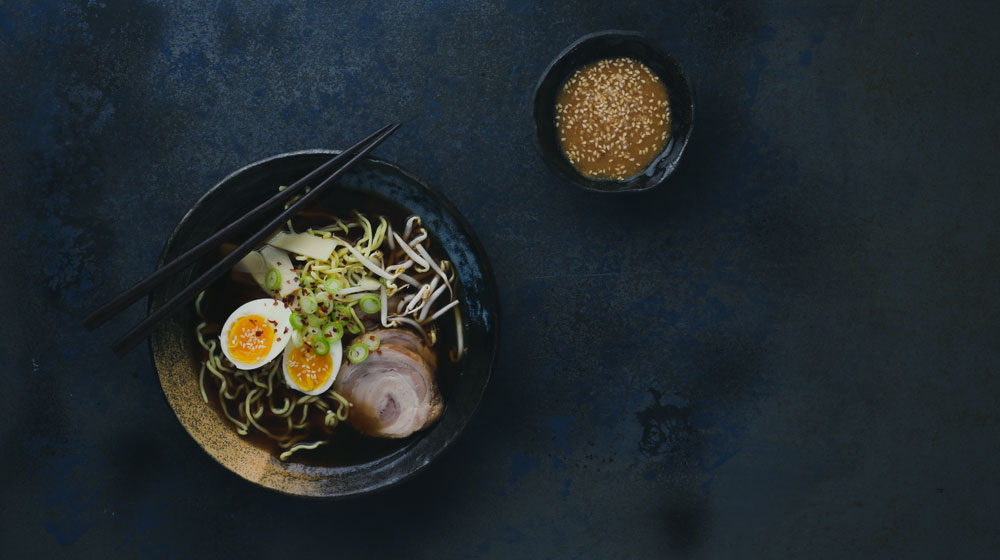 It’s all in the broth…

If you’re a little confused at how we can wax so lyrically about those cheap packets of dried noodles and seasoning, then you need to keep up. Ramen is a traditional noodle soup, made from one of four broth bases. Tonkotsu, a creamy, pork-based stock that is cooked for a minimum of 12 hours; shoyu, with a soy sauce and pork base; shio, a seaweed and chicken base and miso, a vegetarian broth made from the paste of the same name. The noodles, however, are just as important. As above, you should never be putting dried instant noodles in your broth. You can buy fresh ones from any good Asian supermarket.

The thing about a ramen noodle is that its makeup is rather particular. While they are made the way most noodles are made (flour, egg and salt), the type of water used to make ramen noodles is quite specific. In Japan, the water is called kansui, and it has a specific alkalinity that gives the noodles their buoyancy, bite and distinct yellowish colour.

How to top your Ramen bowl…

While the broth and the noodles used in ramen are very strict, the toppings are really where you can let loose. There are no rules here. Generally speaking if you’re eating a Tonkotsu broth, you can expect to find some marinated pork belly (known as chashu) in there, but it’s really up to you. You can pop a 6 minute-boiled egg on top, some spring onions, some bok choy. It’s the perfect choose-your-own-adventure meal.

There is an ongoing debate that a Chinese man by the name of Shu Shunsui brought the original ramen recipe with him to Japan when he was escaping Manchu rule, somewhere in the 17th century. A more plausible, while still  hotly-contended theory, is that a wave of Chinese workers moved to Japan during the 19th century. Some of these workers found employment in the Rai-Rai Kitchen in 1910, where they cooked a dish originally known as shina soba. Shina is the Japanese phonetic pronunciation for China and soba is another very popular noodle in the country. So, essentially, the first bowls of ramen were noodles in a Chinese-style broth. As Japan was experiencing an empire boom of

Shina is the Japanese phonetic pronunciation for China and soba is another very popular noodle in the country. So, essentially, the first bowls of ramen were noodles in a Chinese-style broth. As Japan was experiencing an empire boom of

As Japan was experiencing an empire boom of sorts, and included parts of China in that empire, the dish became more and more popular. When Japan suffered immense losses in the Second World War however and lost its empire, the word shina came under fire. Believed by many to be a symbol of imperialist aggression and Japanese wartime atrocities in China and beyond, shina was now seen as a horrific ethnic slur, one that represented imperialist xenophobia and racism. So, a new word for the beloved dish was needed. Somehow, the Chinese words for “pull” (la) and “noodle” (mian) came to be used as lamian and the word ‘ramen’ is believed to be the Japanese pronunciation for it.

So, if all of this has you hankering for some hearty ramen of your own, fear not. You can follow our easy recipe for your own Tonkotsu-style Ramen.