We catch up with Cape Town’s Charly’s Cake Angels from Charly’s Bakery.

1. We were a little surprised, but very happy, to hear that the team from Charly’s Bakery will be taking part in the 2013 Col’Cacchio Celebrity Chef Series. Should we expect something sweet?

We don’t often associate with brands but we love Col’Cacchio and order their pizzas and salads often.

I wasn’t convinced that anyone would buy an entire, large, sweet pizza, so instead we developed a large, savoury pizza and a smaller, sweet pizza to go with it. We worked on the whole braaied, melted marshmallow idea with Nutella and toasted hazelnuts. And when we tried it, it was a mouth orgasm!

2. Cakes vs. pizza, sweet vs. savoury – it’s a common dilemma. Do the team from Charly’s Bakery have a preference?

We love both! Charly, my husband who passed away a year ago, was a real foodie and a brilliant cook so we just love all the great food out there.

Everyone suggested we should go for a sweet pizza because we’re a bakery, but creating a sweet pizza proved quite a challenge to us even though we tend to think sweet on a daily basis. Creating the pizza was wonderful.

We are very excited about our savoury pizza – it’s delicious and comes in a vegetarian option with anchovies or a meat option with salami.

3. Design vs. function – an age-old debate. Do you ever find that you have to sacrifice flavour for aesthetics in your cakes?

One should never, ever, sacrifice flavour for aesthetics.

Sometimes we can’t give people who order our amazing, carved, 3D cakes a choice of flavour. Most people don’t understand that you can’t make these amazing looking cakes using a vanilla sponge and layers of cream or caramel – it simply won’t withstand being built into shapes.

We are actually not sacrificing on flavour because we use our Wicked Chocolate Cake recipe that carves into any shape under the sun and tastes fantastic. 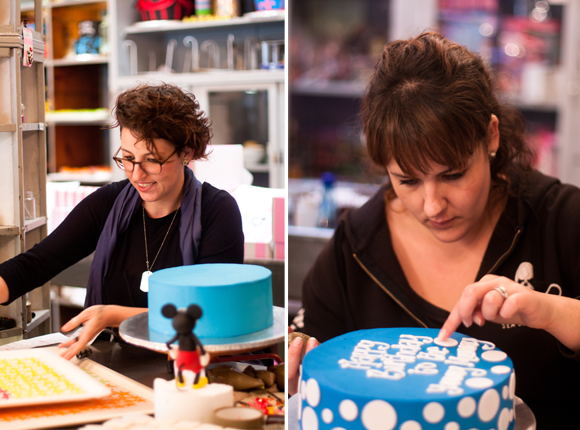 4. When imagining a pizza designed by Charly’s Bakery, the image of a brightly-coloured polkadot pizza comes to mind – how important was colour to you when designing the pizza for Col’Cacchio?

Savoury ingredients don’t have the range of colours like hot pink and turquoise that you can create with icing but yes, colour was very important to us.

Col’Cacchio were amazing – knowing how busy we are, they arrived with a whole collection of pizza bases and the ingredients that we had requested. They provided us with a whole kit and we went home and ‘played’.

We were still able to work with colours that we loved – the balsamic tomatoes have a lovely glaze on them, shaved Grana Padano, and the beautiful colour and shapes of grilled artichokes.

The pizza goes into the oven with only the tomato base, the balsamic tomatoes, salami or anchovies and the delicious grilled artichokes. When it comes out of the oven it is topped with the shaved Grana Padano, the balsamic reduction and pesto, because we wanted to preserve the green of the pesto.

5. Was the combination of flavours as important as the colour?

It was very important to us that the ingredients are spread out correctly and that each bite of the pizza will give you the right combination of flavours. We take the same care with the spread of ingredients when making a cake or a quiche – each bite has to have the right combo. 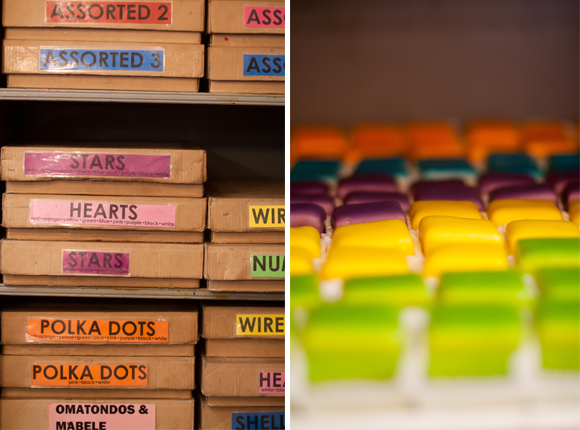 6. Any tips that you picked up during the experimental phase?

We found this magic tip for warming up a slice of pizza that everyone should know about. You warm up the toaster and put two slices across the top. It crisps the pizza from underneath and melts the topping ingredients. It’s the best and the pizza tastes even better than the night before.

7. Charly’s Bakery must have been asked to make some bizarre cakes – tell us about your strangest request?

One of the strangest was a cake that a husband had made for his wife’s fortieth birthday. She had broken her leg and he ordered a cake in the shape of her leg –from the knee down to her foot, complete with the plaster cast and perfectly manicured toes sticking out. He put it on the table at the restaurant where it caused an absolute stir – some people were grossed out by the idea of eating feet and a plaster cast. I thought it was quite exciting because of the contrast between the grossness and the taste – quite wonderful!

A kitke bread cake for a Friday night dinner, a roast chicken cake… we did an amazing skull with maggots and cockroaches coming out of it…  and the list goes on. ’50 Shades of Gray’ has also been a very popular and daring topic recently.

8. What would be the most beautiful cake?

You can’t ask me to choose between my ‘children’. Seriously, the wedding cakes are my ‘babies’ as I’ve been doing them from the very beginning. I do have a Top Ten but I couldn’t choose the most beautiful.

We’ve done a bottom in lacy underwear that I just think is so delicate and pretty, you just want to grab them.  We have recently done a steam punk top hat. To create all the cogs and the wheels that go with it is just awesome…

9. Any idea how many cakes Charly’s Bakery has made over the years? Do you sell more cupcakes than any other cakes?

We sell around 1 000 cupcakes a day on average but I have no idea how many we have made in total. We also make around fifty of the standard round cakes a day. Our TV show, Charly’s Cake Angels, really helped us to handle big turnovers because we had to learn to prep for higher volumes. We are so used to going at such speed that if you told me now that you needed a wedding cake for this weekend, we would be able do it.

10. Charly’s Cake Angels – the TV show. Tell us about that experience.

We never, ever woke up and thought we wanted to become TV stars. It was something that just happened. I used to be so camera shy that whenever I got called to do a TV shoot I would break out in fever blisters from sheer terror and send one my daughters instead.

Our show has just been bought by Fox Latin America so we are going to be a part of the launch of their new food channel. It is unbelievably awesome!

The series has been seen in most countries except America and Australia. The show has been translated into Spanish and Italian, and has been shown in all of the European countries. Even countries in the Middle East, like the UAE, are crazy about it.

11. Are there more TV series planned for the future?

Yes, we finished shooting season two at the end of April. The first six episodes went off to the overseas producers today and we are working frantically on the last seven episodes as we have to have them finished before we close for our annual three week holiday at the end of this month.

Filming has been like having two extra jobs. There is no storyline or script – it is literally reality and there are no “second takes” in our world. 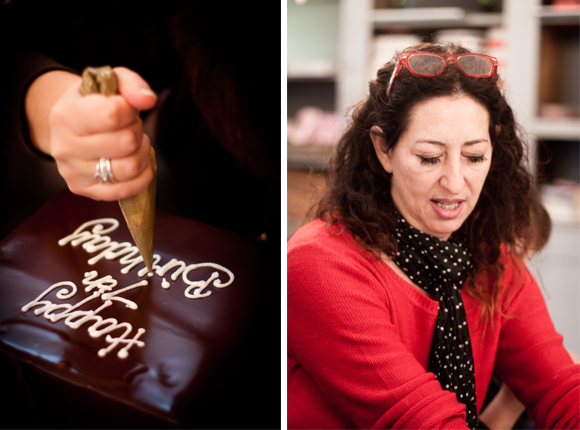 12. Now that Charly’s is an institution in Cape Town, is there a fear of stagnating or does each new project bring another creative challenge?

The second we finished filming, I felt filled with new energy and I’m just bringing in new things all the time – new recipes, new designs, new ways to work.

I personally have no formal training in cakes – everything I know I learnt from Charly. The recipes are all his as he was a German master baker and he taught us all of the methods. For me, the cakes became my canvas and because I have no training, there were no rules. I am very much an out-of-the-box thinker so in answer to your question, we will never, ever stagnate.

13. Where do Charly’s Bakery find their inspiration?

Inspiration is everywhere and our motto at the bakery is ‘innovate, don’t imitate’. Fortunately people have the weirdest and most wonderful ideas, so all we need to find out is why the person needs the cake. Love and feeling provide a lot of inspiration. Thank God for birthdays, anniversaries and weddings!

14. The Col’Cacchio Celebrity Chefs Series raised R300 000 in 2012. Does Charly’s Bakery often try to get involved in initiatives like this, giving back to less fortunate communities?

It is so important to me that I am working very seriously on starting an NGO of my own.  I believe that the success of our business during the recession is because we have given so much back.  We moved into our building in 2009 with 12 staff members and today we have 40.

We have adopted many charities – starting 14 years ago with The Big Issue. We started by sponsoring cakes for their vendor meetings. People trust our brand so when we ask, people are willing to give… and we make sure to film at our charity events, which offers the charities additional exposure.

To be selected by Col’Cacchio was a wonderful honour – and to be called a Celebrity Chef did tickle my ego a little!

15. Your buildings have always been quite eye-catching – where did the idea for the décor come from?

I have always been a strong believer in street art – I wanted to show that graffiti could be beautiful and used as décor and that was where it started.

I believe that a very important part of creating a restaurant brand is not to do what is fashionable – rather be creative and do what you love. 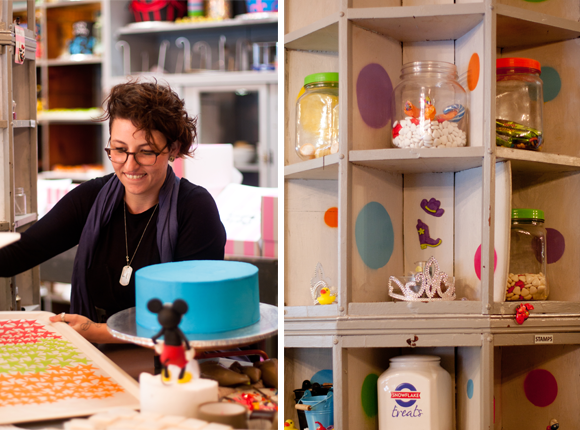 16. Charly’s is a family-run business. Are all your daughters creative?

They are all creative, each in their own unique way.  Daniella, for instance, is not only creative, she is also brilliant at organising. Alex and Rocky are brilliant at decorating cakes, and all three of them have taken the skills that I have taught them and now they are better than I am.

I never believed that I was creative because I cannot draw. To this day, I still draw stick figures for the bride and groom cake top when designing a wedding cake. Somehow when I have an icing bag in my hand, I can draw, and as I started to play with cakes I learnt that maybe I too am artistic in my own way.