Sunny skies, fynbos, wide-open spaces…there is a reason lamb from the Karoo tastes amazing. Did you know that ‘lamb shank’ is Latin for ‘meat lollipop’? Okay, I made that up, but it definitely should be. Besides sounding like the coolest part of a lamb, (say ‘lamb shank’ out loud a couple of times), the shank is also one of the tastiest. So treat yourself this weekend and feel like a proper cave dwelling individual, as you tear off mouthfuls of sticky, sweet amber ale-glazed lamb.

Need to know: Shanks are a cut taken from either the shoulder (fore shank) or arm of a lamb, or the upper part of the leg (hind shank). This cut can be quite tough, so is best when braised or roasted for a few hours, until it becomes fall-apart tender.

Beer Pairing: Jack Black Lumberjack Amber Ale
When cooking with beer the rule of thumb is to pair the dish with the beer that you used to cook it. In this dish the basting sauce for the shanks is made with Jack Black Lumberjack Amber Ale. It’s a roasted malt amber ale with a rich red colour, and is perfect for washing down roasted and caramelised meat.

Marinade
Heat the olive oil in a medium-sized saucepan over a medium heat, and fry the onion until golden brown. Add the garlic and cook for another minute. Add in the rest of the ingredients and stir to combine. Reduce to a low heat, simmer and stir occasionally to combine the flavours. Continue to simmer until the sauce has reduced to a semi-thick consistency. Remove from the heat and set aside.

Lamb Shanks
Set the oven to 160 °C. Coat the shanks with olive oil, and then give them a generous coating of NoMU Roast Rub. Place the shanks into a roasting dish and scatter the garlic and rosemary in the dish. Cover with foil and bake until fork tender. The shanks will be finished on the braai, so they shouldn’t be fall apart tender at this stage. When the shanks are done, remove from the oven and allow to cool slightly. Once cooled, baste generously with the marinade. Braai over medium-heat coals and baste with every turn until you get a tasty, caramelised crust.

Bacon Sweet Potatoes
Grill, fry or braai the bacon slowly until it’s nice and crispy, then chop roughly and set aside. In a small cast iron pot, melt the butter and sugar together, and then add in the cinnamon sticks. Layer the sliced potatoes over the mixture, and season with salt in between each layer. Slowly simmer over medium-heat coals with the lid on, until the potatoes are cooked through. Sprinkle with the crispy bacon bits before serving. 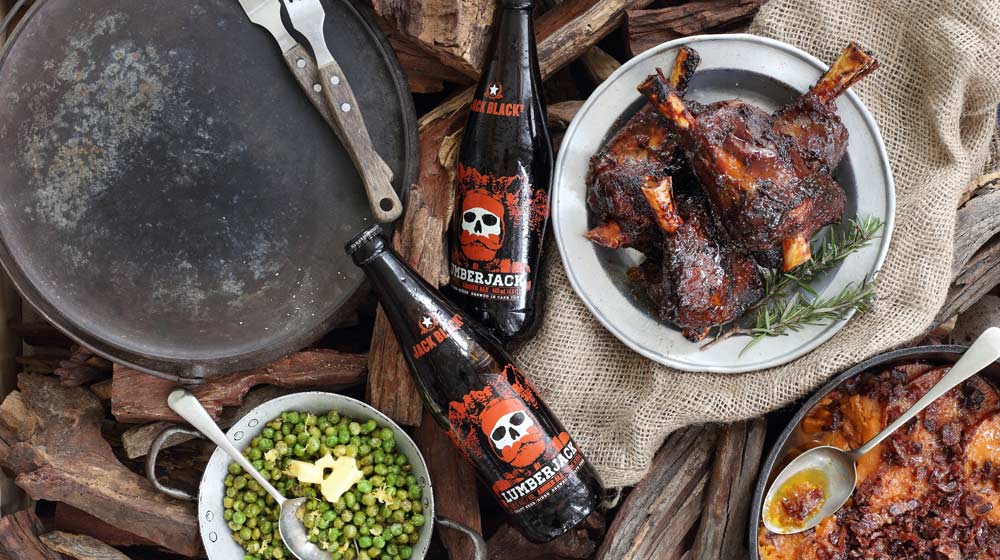