Saffron, the spice of our dreams! All your favourite Persian and Indian dishes are made from this legendary spice, it’s deep reddish hue brings such flavour and colour to any dish. But why is it so expensive? Just one kilogram can cost you up to R250,000 — that’s more expensive than silver! Before we dive into why this ancient spice costs so much, we need to know — where it comes from, are there any health benefits, how is harvested, how to use it and how to spot the fakes from the real deal.

What Is Saffron and Where Does It Comes From?

Saffron comes from the purple, Crocus sativus flower. Each flower has three red stigmas and that’s what saffron is, those little red stigmas. This flower only blooms in autumn for a six-week period each year. The red stigmas must be hand-picked, which makes harvesting incredibly laborious.

It was first cultivated in ancient Greece, but today the spice grows primarily in Iran, which produces about 90 percent of the world’s saffron. India, Spain, Italy, Morocco and Greece all follow suit. That being said, this spice is incredibly adaptable and can grow almost anywhere in the world. There has been some micro-production in the US but most of it is still imported from said countries. There is a long list of other health benefits from saffron, this all just shows us that there is more to this spice than just it’s aroma and flavour. Its popularity may have peaked in the Middle Ages as a medicine, when it was used to treat the Black Death, but that doesn’t mean that we still don’t have medical uses for this spice.

Saffron is also rich in plant compounds that act as antioxidants.

Avicenna, also known as Ibn Sina (980-1037 AD), the ‘father of modern medicine‘, mentioned in his texts that saffron was used as an eye strengthener, heart tonic, and had digestive and anti-inflammatory properties. Historically, traditional healers have used the spice to treat everything from heartache to measles.

This ancient spice still has some pretty spectacular health benefits. There have been studies that show saffron may help treat symptoms of mild-to-moderate depression. Saffron is also rich in plant compounds that act as antioxidants, such as crocin, crocetin, safranal, and kaempferol. These antioxidants can help protect your cells against certain chronic diseases, they also have cancer-fighting properties and can protect you from oxidative stress.

There is a long list of other health benefits from saffron, this all just shows us that there is more to this spice than just it’s aroma and flavour.

Saffron can also aid in lowering one’s blood sugar levels and raising insulin sensitivity. There have been studies that show that saffron may be able to improve cognition in adults with Alzheimer’s disease. Not only that, the properties in saffron has shown to lower blood cholesterol and prevent blood vessels and arteries from clogging. 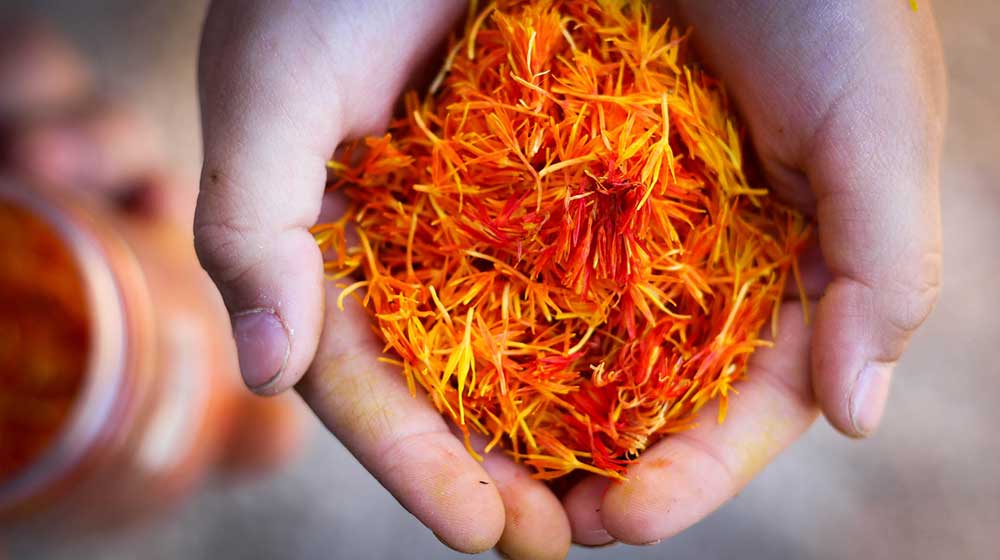 Why Is It The Most Expensive Spice In The World?

As mentioned above, this precious flower blooms only once a year for a short period of time. Each flower has to be hand-picked to retrieve the stems, there’s also a specific time of day to harvest them. It takes about 1,000 flowers to produce just one ounce of saffron — 1,000 flowers! That’s not all folks, you’ll need to hand-pick approximately 374,000 flowers to create just one kilogram of saffron.

The real reason that saffron is so expensive is because of the three main chemical components that make up the flower — safranal, crocin, and picrocrocin.

It’s harder to pick the saffron when there is a higher relative humidity in the air, which can affect the flower. Dozens of environmental factors can impact the quality of the flower, sunlight also plays a role in affecting saffron, it can break down the chemical structure of the flower. Even though this flower is weather adaptable and can be grown almost anywhere in the world, 90 percent of the world’s saffron is still grown in Iran. The sad reality of this is because the workers are more available and cheap, they often get paid as little as $5 (R 75) per day.

The real reason that saffron is so expensive is because of the three main chemical components that make up the flower — safranal, crocin, and picrocrocin. These three compounds are extremely expensive, they are also responsible for the smell, taste and colour of saffron.

Even though this flower is weather adaptable and can be grown almost anywhere in the world, 90 percent of the world’s saffron is still grown in Iran.

Not only does saffron add an incredible flavour to dishes that is impossible to replicate with other spices, but it is also used as a fabric and skin dye, for perfume, and can in the future be used more for medicinal purposes as noted from the health benefits above. 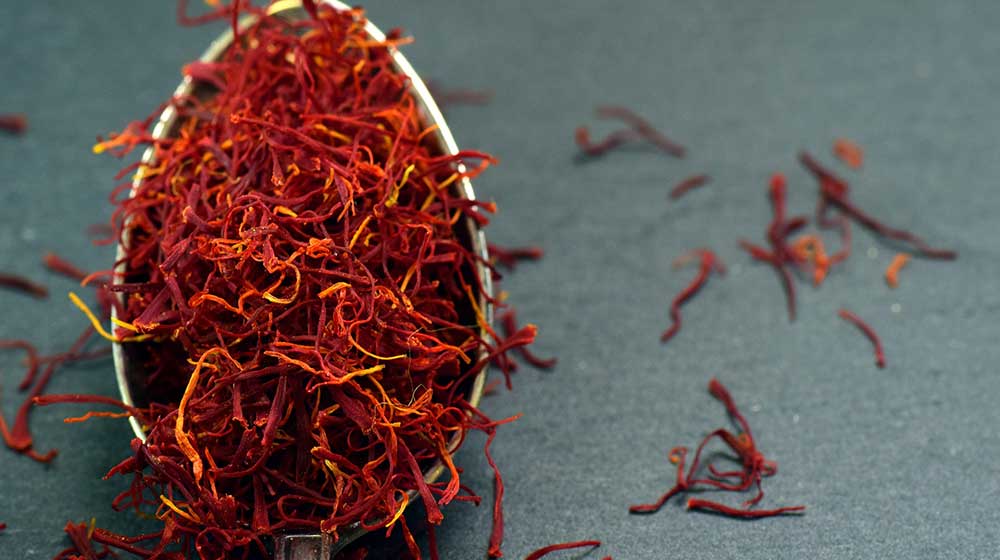 How To Spot A Fake

If you’re going to spend top dollar for some saffron, you need to not only make sure you’re getting the real deal but also the best possible quality. There are a couple of tell-tale signs to differentiate between the fake and the real stuff…

Firstly, take a sniff. It needs to smell a bit like hay, it should also smell a bit sweet. Fake saffron will have almost no aroma, even the smallest amount of real saffron will have a relatively intense smell. There should always be red stigmas, not yellow stamens, they could be selling you Safflower or ‘Mexican saffron’ — this is not the real deal, so keep an eye out.

It’s almost always better to buy from a known supplier and to not try to skimp and buy the ‘cheaper’ stuff just because of the price.

Another thing to note is the colour, there is a unique colouration that will not change when adding it to water. Fake saffron will lose all of its added colour and will probably turn a dim red, whereas the pure spice will turn a honeyed yellow. You also need to make sure to taste the spice. You can taste the water that the saffron has been added to, if the water has a floral taste to it, it’s the real deal. If the water has a bit of a metallic taste, it’s an impure batch.

Fake saffron will lose all of its added colour and will probably turn a dim red, whereas the pure spice will turn a honeyed yellow.

To avoid deception do not buy ground saffron, it’s very rarely pure. It’s often cut with other spices to give it the original saffron colour, like paprika, turmeric and sometimes bark. It’s almost always better to buy from a known supplier and to not try to skimp and buy the ‘cheaper’ stuff just because of the price.

We’ve compiled a list of our favourite saffron dishes just for you!  We tried to steer clear from the typical paella dishes that saffron makes so great and give you recipes you wouldn’t have thought this spice could elevate any more. 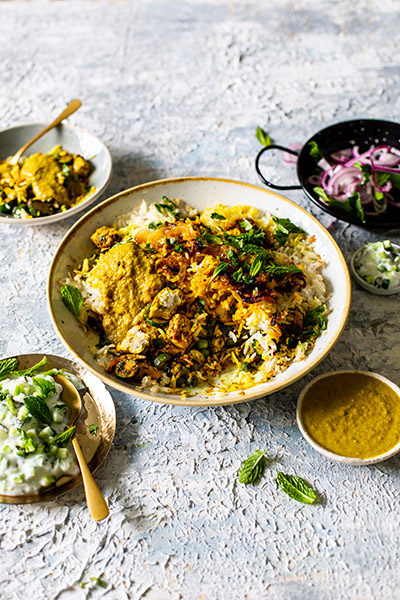 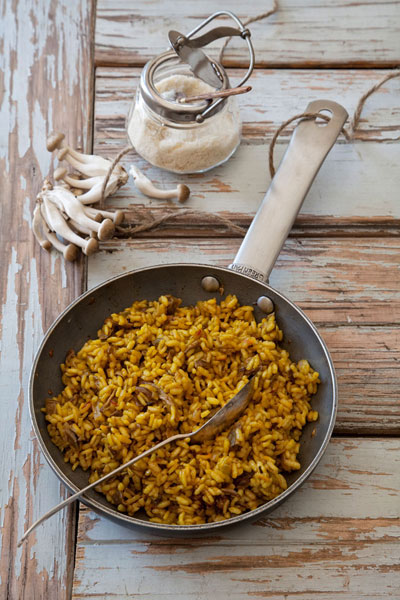 Although this recipe is vegan, it’s not exclusively for those non-dairy, non-meat eaters. The saffron really adds such a sweet taste to this delicious biryani.

Recipe For Saffron And Veggie Biryani

The saffron adds such a delicate flavour to one of Italy’s most famous dishes. Who doesn’t love a cheesy risotto! 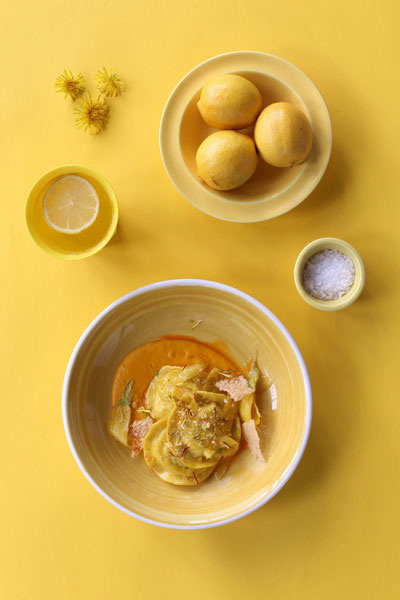 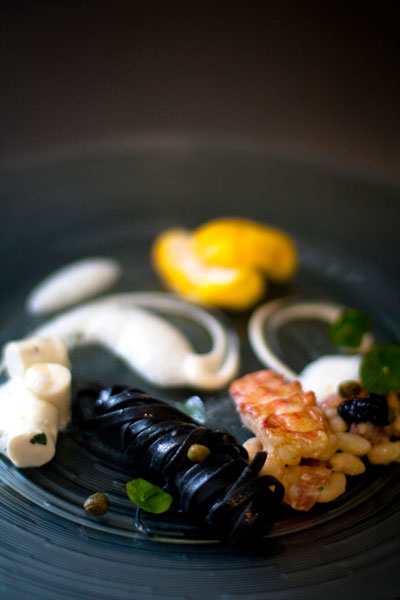 For those cold nights when you want a dish that not only warms the body but the soul. The earthy notes of the saffron and carrot paired with the crunch and nuttiness of hazelnuts is a wonderful combination.

This recipe was made by Peter Templehoff, the chef and owner of Fyn, so you know this is going to be an out of this world dish. Elevate your culinary skills and bring fine dining into your kitchen with this delicious seafood pasta dish!

Share52
Tweet
Pin6
WhatsApp
58 Shares
Coriander Cancel: Why Some Hate the Taste of Coriander
A Seat at the Table with Nederburg Heritage Heroes & Local Cuisine