Wake Up and Smell the Coffee Recipes with Vida e Caffè

Most of us wake up bleary-eyed in the morning and only truly get ready to tackle the day when we’ve had a caffeine fix from our morning cuppa. But it’s time to think beyond the brew; coffee is so much more versatile than just a morning kickstart – its deep, intense flavour lends itself well to both cooking and baking, adding a rich depth of flavour that’s hard to beat.

Get to know vida e caffè

If we look out the window at Crush HQ, we look right onto the iconic flagship vida e caffè store on Kloof Street that started it all. Way back before coffee culture was really a thing in South Africa, vida was a pioneering force, slowly creating a phenomenon that would change the way we drink a cup of Joe. Since then, the brand has grown to over 200 stores nationally and its galaxy of flavours range includes six coffee blends, each unique in their own way.

We put our mugs aside and use the vida e caffè range of beans (Vega, Auriga, Devra and Capella) to create four coffee recipes showcasing just how awesome coffee is as an ingredient. 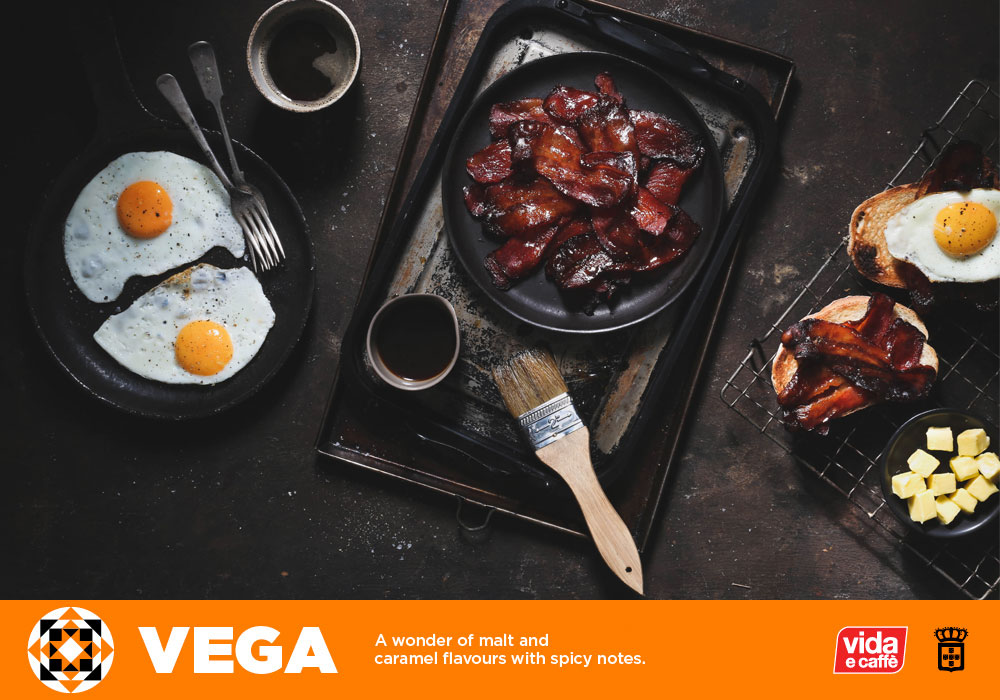 It’s all in the stars: Vega is a bright star just 25 light-years from Earth, visible in the summer sky of the Northern Hemisphere. Source: space.com

We’ve chosen to use vida e caffè Vega beans for this recipe. Vega’s malty and caramel notes work well with this recipe and the coffee amps up the flavour to give that perfect sweet-salty balance. This bacon is great to add some weight to a classic breakfast but trust us and make extra, you’re going to want to turn it into a mammoth bacon sarmie later in the day.

Fact: Coffee hasn’t always been popular with those in power. At various times during history, there have been attempts to ban it due to it causing an increase in ‘radical thinking’. Coffee prohibition? We’re glad that never stuck! 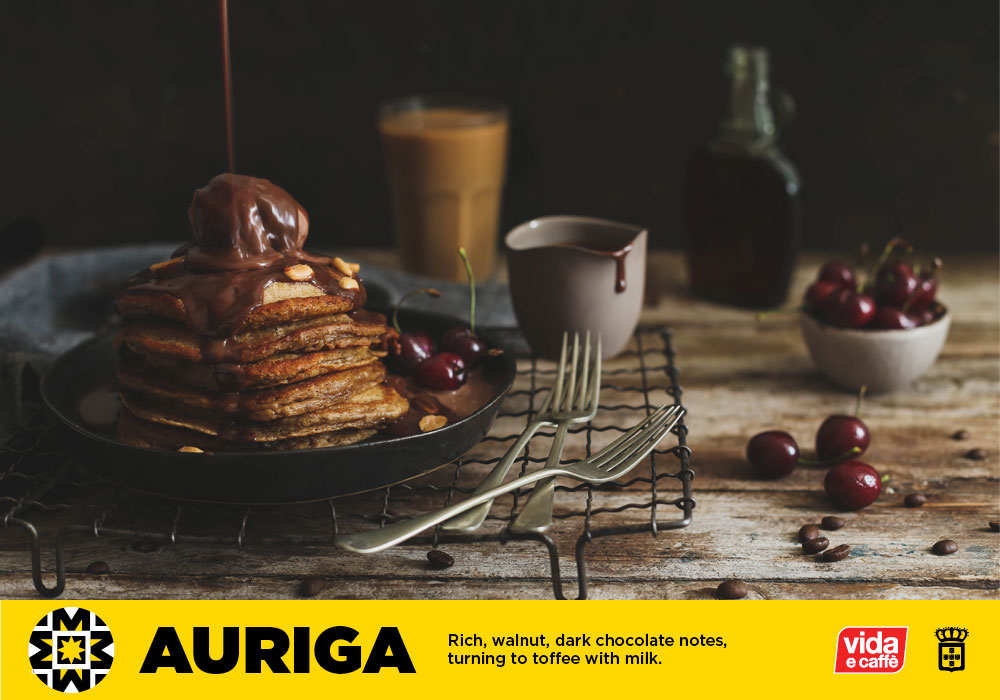 If you’re looking for some coffee-on-coffee action with your morning coffee, then you’ve come to the right place. Pile em’ high and drench with sauce for maximum mocha flavour.

Star struck… Auriga is one of the 88 modern constellations; it was among the 48 constellations listed by the 2nd-century astronomer Ptolemy. Source: Wikipedia

We’ve chosen to make our coffee pancakes with vida e caffè Auriga beans. The deep and intense chocolatey notes are perfect for the mocha sauce and give the pancakes a rich coffee flavour and beautiful colour. Don’t be shy with your toppings, think ice cream, plenty of sauce, your favourite fruit and even salted peanuts.

These flapjacks will become a weekend favourite we guarantee; serve with a freshly brewed cup of vida e caffè Auriga coffee to complement. We’re pretty sure plain flapjacks will be a thing of the past when you’ve tried these, definitely one of our favourite coffee recipes of all time.

Wow! Globally we’re consuming around 1,4 billion cups of coffee daily. Do your bit to prevent cups and lids ending up in landfills and use a cool re-usable cup. vida e caffè sells their very own re-useable ‘Corky Cup’ in-store and will give you R2 if you bring your own cup! 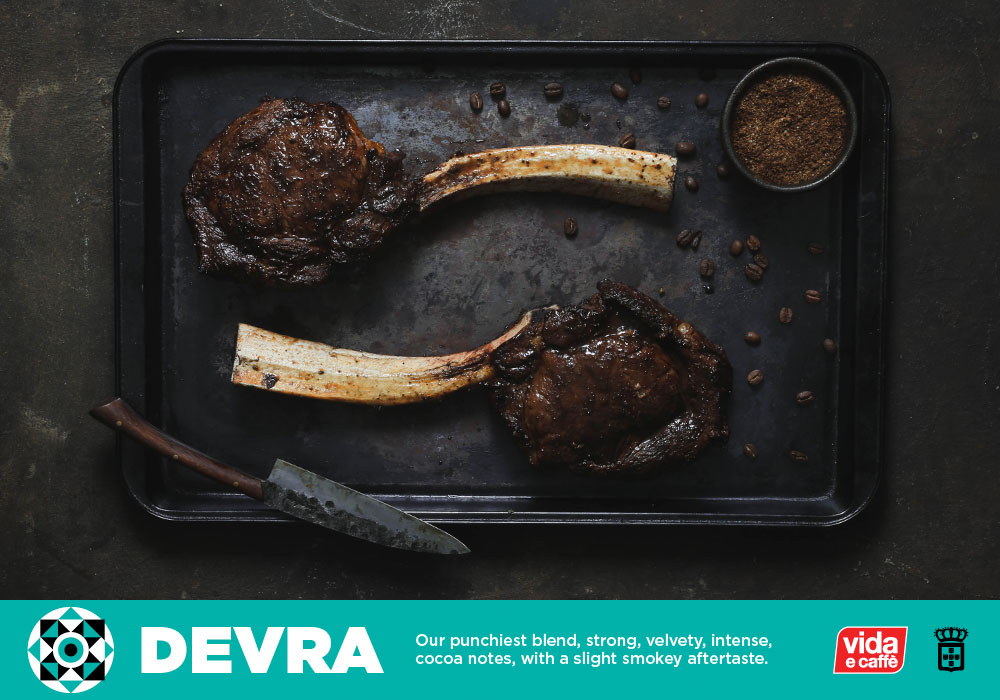 There are steaks… and then there are coffee-rubbed tomahawk steaks. Besides being ridiculously tasty, they just sound cool too. It’s automatic to think of baked treats when you think of cooking with coffee, but it gives savoury dishes a hit of umaminess and can even help with tenderising meat.

Written in the stars… A mysterious astral body, Devra has mesmerised astronomers throughout the ages.

We’ve used vida e caffè Devra beans for this recipe. The beans are 70% Arabica and 30% Robusta and are dark, strong and smokey. The blend stands up to the bold aromatics in the rub, without the spices overpowering it. The coffee complements the overall flavour profile and gives this rub punch.

Did you know? Coffee was the original ‘energy ball’. African tribes would grind the beans, mix with animal fat and chew for an energy boost. 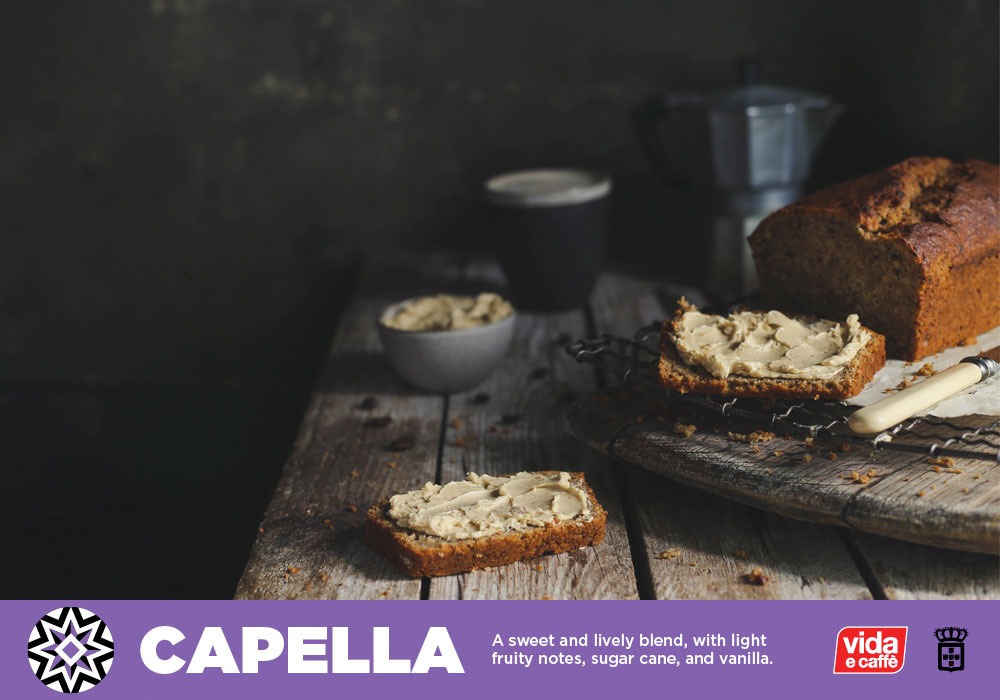 We chose vida e caffè Capella beans for this recipe. The mild vanilla notes work perfectly in the whipped butter and add a smooth coffee flavour. In this recipe, we’ve opted to use half regular flour and half wholewheat flour, which gives this loaf a sturdier, more bread-like texture.

If you want to opt for a more cake-like version, then sub the flours for equal amounts of cake flour. Adding liquid to the butter and whipping gives it a light, almost fluffy texture and actually makes it stretch a bit further. Trust us, you’ll love the creamy coffee flavour of that butter.

Star rating… Capella is a bright star in the constellation Auriga. While Capella appears as a singlestar to the naked eye, it actually is a group of four stars — two large binary stars, and two fainter binary dwarfs. Source: space.com

Did you know? Coffee has so many uses besides just eating and drinking. You can use it as a body scrub, a deterrant for pesky animals and even as a fertiliser for your plants. Find out more HERE.