Living a plant-based or vegan lifestyle is growing more popular year on year. Consumers are looking for options that have less of an environmental impact, while at the same time are healthy and earth-friendly.

Plant-based products that offer great nutritional value and flavour, such as the Quorn range, are great options for those wanting to vary their diets. There are so many delicious dishes to make that are healthy, interesting and full of flavour.

We get cooking with the Quorn Vegan range and create four tasty Indian-inspired dishes. 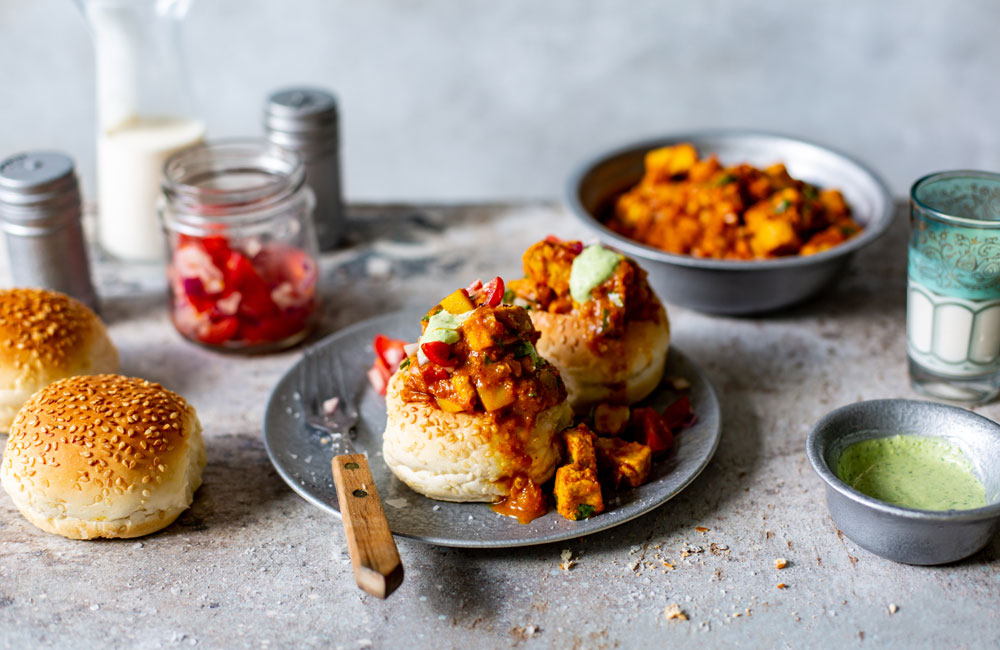 Bunny Chows are a Durban classic that we love. In this recipe, we’ve made mini versions using dinner buns and filled them with Quorn Vegan Savoury Pieces.

They’ve been topped with spicy tomato salsa and a cooling coconut coriander cream. These are like slider versions of the original dish and that means you can definitely enjoy a few! 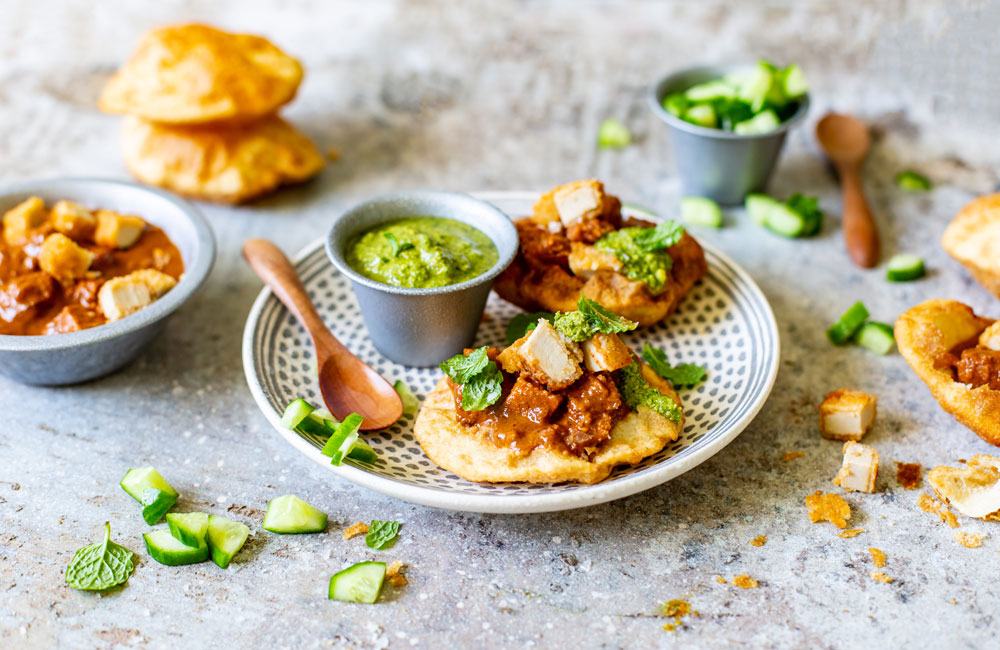 If you haven’t yet tried puri, you’re missing out. Puri is made by frying unleavened bread dough until it’s golden and crispy. These light-as-air puffed up breads are the most delicious carriers for a saucy topping.

In this recipe, we’ve used Quorn Vegan Nuggets in a sauce inspired by a traditional Butter Chicken curry and have topped that with a green chutney full of herbs like coriander and mint. The chutney provides the perfect sweet balance for the curry and everything is mopped up with crispy puri. This dish has a cosy Friday evening at home written all over it. 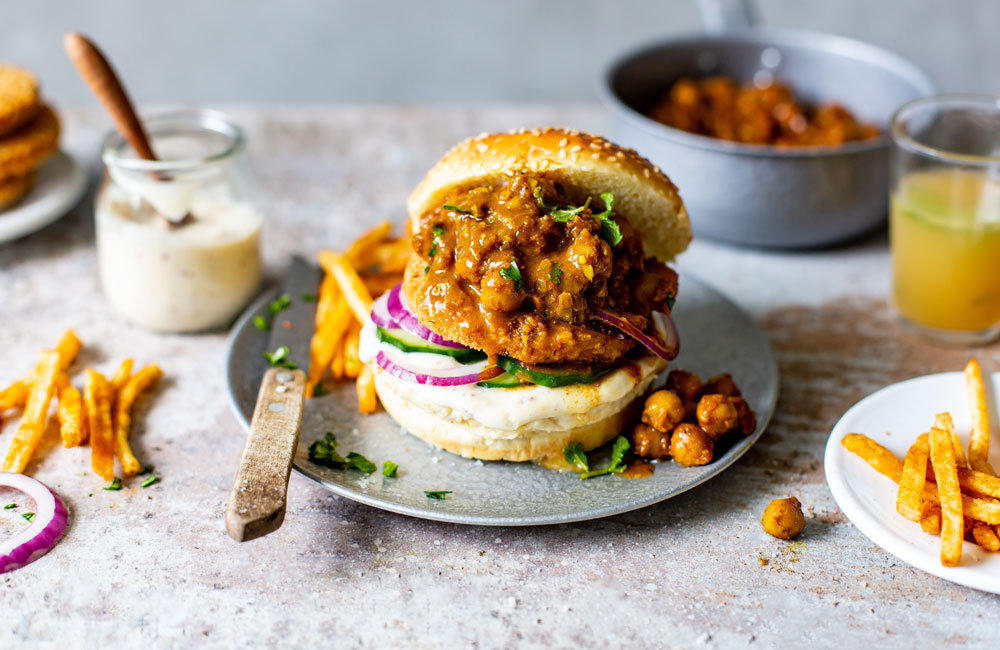 Take your burger to the next level with a spicy chana masala topping. Curried chickpeas add texture and extra protein to your burger experience and the combination of spices adds another layer of flavour to the dish. All of that goodness piled on top of a crispy Quorn Vegan Hot and Spicy Burger patty makes for a weekend meal worth tucking into.

We just LOVE the vegan mayo that goes with this dish, adding a creamy element that’s also perfect for dunking crispy fries.

Get the Recipe for Vegan Chana Masala Burger 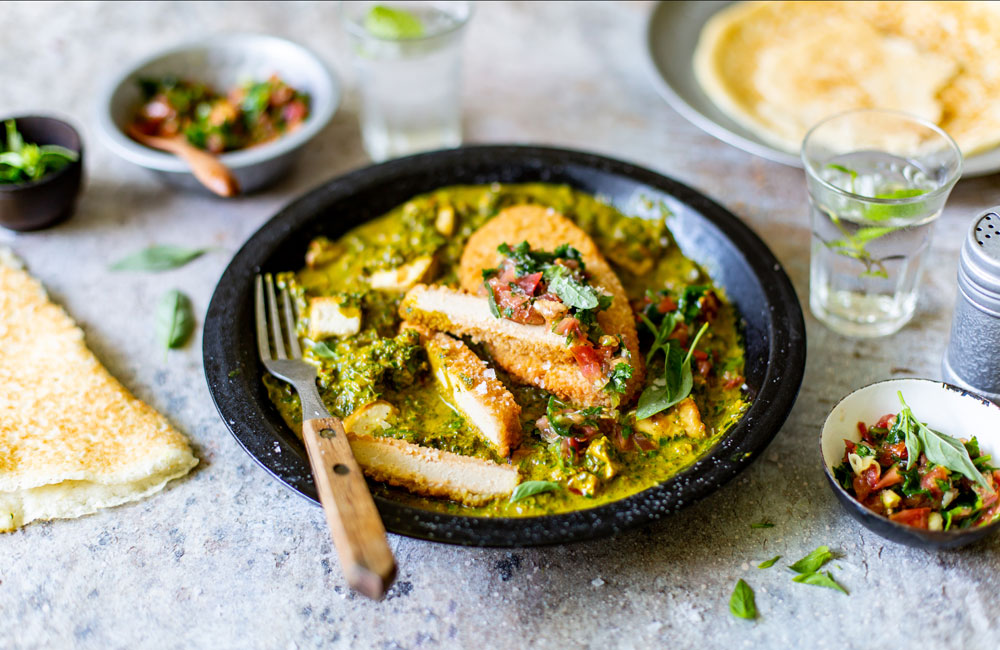 This is the dish to make to impress your vegan or vegetarian friends. A traditional Saag Paneer would have spinach and cheese but in this vegan version, the paneer is switched out for tofu incorporated into a delicious curried spinach base.

Serve crispy Quorn Vegan Schnitzels with the vegan saag paneer and appams, which are fermented rice pancakes. The rice pancakes will take a bit of time to prepare but once you’ve tried them, you’ll want to make them again and again.

Loved these Indian-inspired Quorn recipes – check out more of them here.