My love affair with grilled cheese toasties goes back to my earlier years of life in Durban. My mom had this old silver snackwich machine that was part machine, part miracle worker. Any sarmie, no matter how bland or stale was instantly better as a snackwich. As the years went on, that magical toastie machine and I became good mates. I’d turn anything into a toastie with one of my favourites being a tinned spaghetti toastie. But as much as I enjoyed the carb on carb action, the top of the snackwich mountain was always the gooey, molten, golden grilled cheese.

Growing up as one of five kids, a cheese toastie was the stuff of myth and legend.

Cheese was expensive back in the day and a block didn’t stand a chance in our house. A cheese toastie was something that was spoken about in hushed whispers at communal bath time. My older siblings would recount their experiences with a distant look in their eyes, before blaming us newer recruits for the current lack of cheese.

When it comes to a great cheese toastie, the experts agree that the cheese is the star of the show.

While I agree with this, I also believe that kickass bread is essential. I’m a sucker for homemade bread and at Saggy Stone Restaurant & Brewery that’s exactly what I found. Located just outside of Robertson in the Western Cape, Saggy Stone is owned and run by ex-baker turned farmer and brewer, Adrian and his lovely wife Jackie. On a trip there I fell in love with their homemade farm bread. Jackie bakes the bread in old-school, oversized farmer’s loaf pans and the result is biblical. When she was kind enough to share the recipe with me, I knew I had found the ultimate bread for my ultimate cheese toasty.

If there’s one cardinal rule to abide by when selecting cheese it’s don’t be a cheapskate.

Yes, you could get a block of normal cheddar, but then you’re just going to end up with a normal toastie. Think bigger and trust me you won’t regret it. I’ve gone with a mix of four and each has a specific role to play. I used Wyke Farms Extra Mature Cheddar for a sharp bite, Ford Farms Oakwood Cheddar for smokiness, Klein River Gruyere for nuttiness and Lancewood Mozzarella for gooeyness.

For extra flavour kick and texture, I’ve added garlic chives and crispy bacon bits to my ultimate toasty. You can add anything you like really but avoid too many things, or you will start to take away from the cheese. Think of additions as accents of flavour rather than creating a Dagwood.

And lastly, I’ve decided to take my toastie to the braai to add the ultimate flavour ingredient, braai smoke. You could do your toastie in a pan for a quicker result, but if you’ve ever had a toastie on the braai you’ll know there is simply no comparison. Now go forth my young Padawan cheese grillers and conquer! 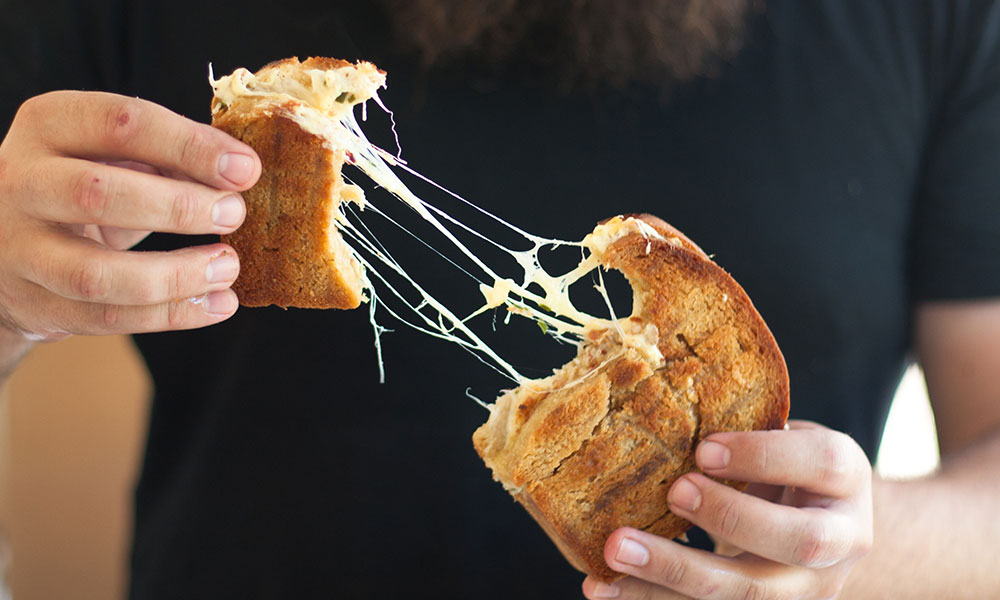 *The recipe can be halved for a smaller loaf or split into 2 smaller tins.

Method
Place all of the ingredients in a large mixing bowl and then add the beer. Either use a stand mixer with the dough hook attachment or knead by hand to incorporate all of the ingredients together. Continue to knead for 5-8 minutes, or until the dough is smooth and elastic. If the dough feels too dry, add a splash more beer until it reaches the right consistency. Beware of over kneading – don’t let the dough become sticky. 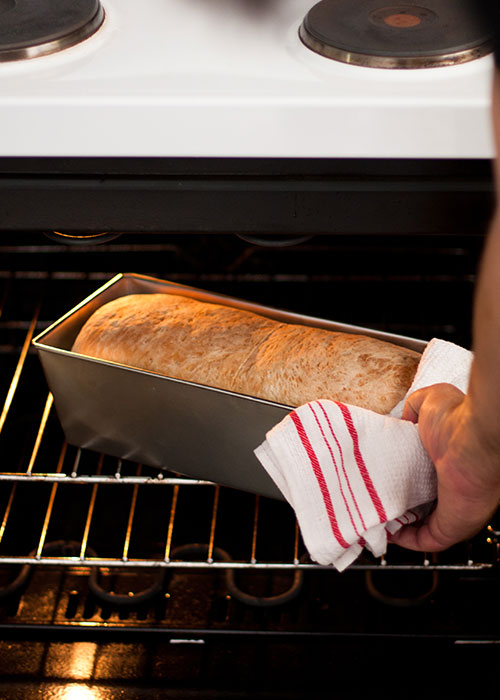 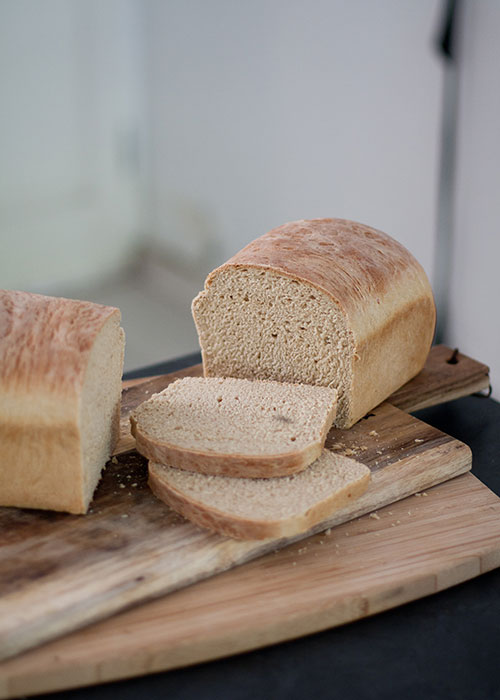 Pop the dough into a greased bowl and brush the top with a little oil. Cover with a damp tea towel and leave it in a warm spot to prove for 30-40 minutes. Preheat the oven to 180 ºC. Grease 1 oversized loaf tin or 2 smaller tins.

Knock back the dough and flatten and form a square shape roughly. The next step is to do a book fold – fold the two sides in and the roll the dough up into the loaf shape watch video here (if doing two smaller loaves, divide the dough into two and repeat for both.

Place the dough into the greased loaf tin(s) and leave to prove until the dough rises to the top, or above the lip of the tin.

Bake for 45 minutes until lightly golden. Remove from the oven and allow to cool in the tin before turning out onto a wire rack to cool completely. 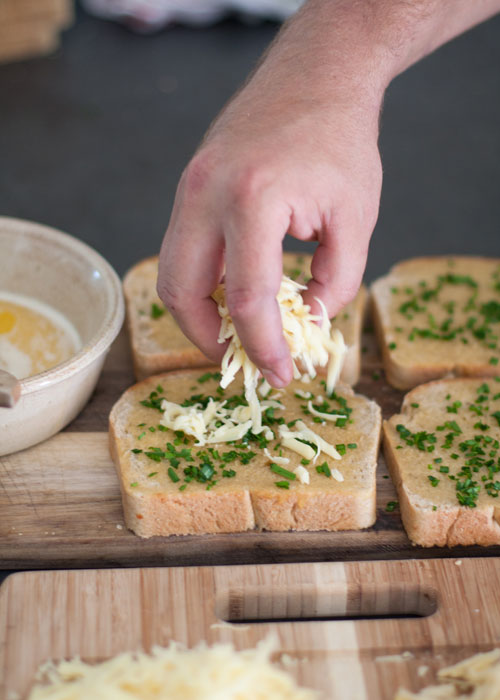 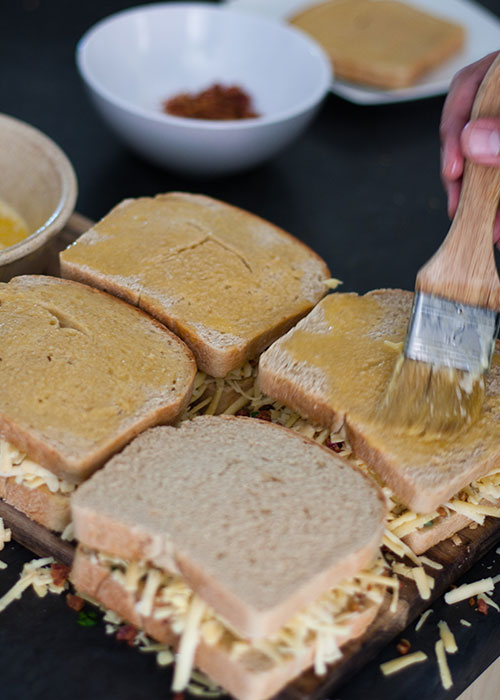 Method
Heat a splash of oil in a frying pan over medium to low heat. Add the bacon bits and fry – the trick to getting super crispy bits is to go slow. Once the fat has rendered out and the bits are golden brown, drain on a sheet of kitchen towel. Keep the rendered bacon fat to one side. Once the bacon bits have cooled, use a large knife and chop into a semi-fine crumble.

Melt the butter in a microwave, add the rendered bacon fat and stir to combine.

Slice eight slices of the Saggy Stone homemade bread (the thickness of the bread slice is up to you, I like a hefty slice).

Tear off four sheets of foil, large enough to be able to close around each sandwich individually.Divide the slices of bread – 2 per sheet of foil. Using a pastry brush spread the melted butter and bacon fat mixture on both sides of the bread.

Layer two of the cheeses on each sandwich; follow with a sprinkling of chives and then bacon bits. Finish by topping with the other two cheeses. Season each sandwich with a little salt and pepper and a shake or two of paprika. Wrap the foil and seal each sarmie.

Braai the foil wrapped sarmies over medium coals for 10 minutes, turning often. This will help get heat to the cheese so that it starts to melt. After 10 minutes check to see if the cheese is melting, if it still needs some time then give it 5 more minutes.

Finally, unwrap the sarmies, pack them into a sandwich grid and braai for a further 10 minutes over medium coals until golden brown.

Serve with an ice cold Saggy Stone Desert Lager and tuck in. 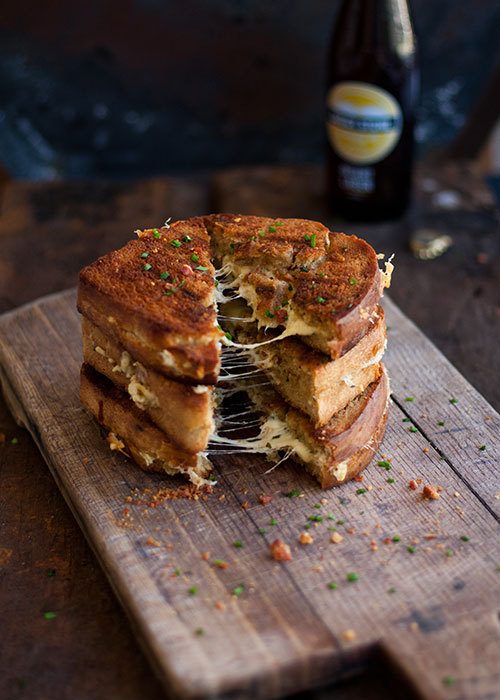 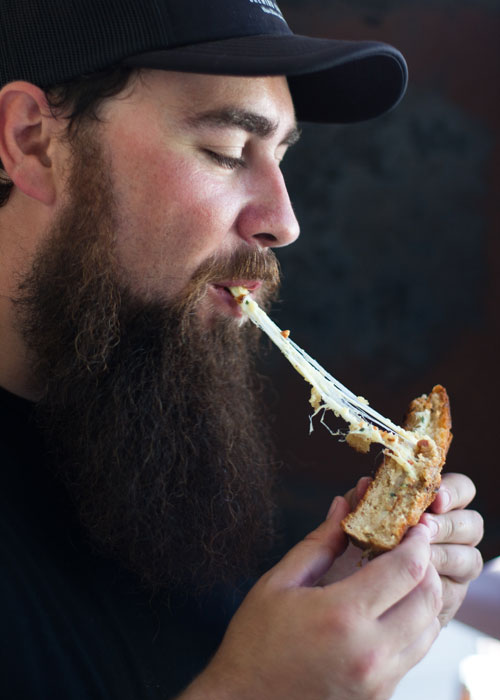