Radicchio, Red Peppers, Snoek Bottarga at The Kitchen at Maison

Something is cooking at The Kitchen at Maison. Nestled in the pristine Franschhoek valley, a short drive from the Cape Town’s culinary capital, the bucolic wineland’s setting belies the seriousness of the task at hand. Maison’s acclaimed Chef, Arno Janse van Rensburg, is preparing to unveil Maison’s new menu: a project five years in the making.

The result is a tasting menu of a dozen different taste sensations that will surprise and delight diners’ palates. Diners are encouraged to experiment with a diversity of dishes. For the full experience, Chef Arno recommends at least four to five dishes per person.

While the menu changes regularly according to the freshest ingredients and ideas, consistency remains constant. Maison’s no-frills philosophy means there’s no room for error. Chef Arno and his acclaimed team carefully oversee each dish, ensuring that everything that arrives at the table is simply outstanding.

Each dish has been stripped down to its essence, using flavours that enhance their counterparts without upstaging them. Because each dish relies on fewer ingredients, they have to be the best. Which means they have to be fresh: sourced as close to Maison as possible.

It was Isaac Newton who said, “Nature is pleased with simplicity.” We imagine Mother Nature is ecstatic with what’s happening at Maison. 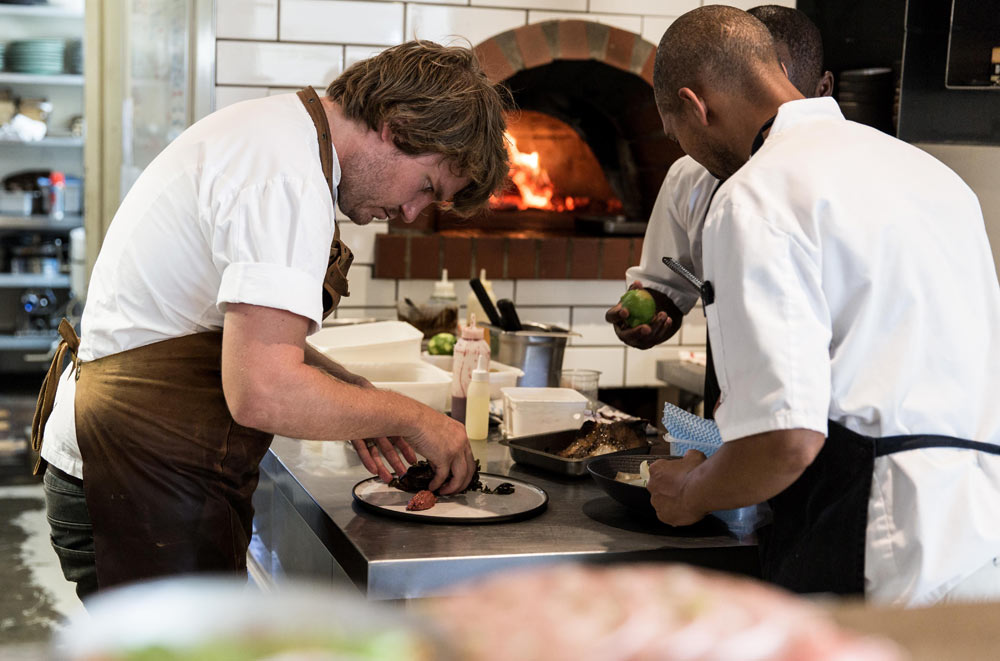 Crush: What was the inspiration behind the dish?

Arno: We were looking to achieve a very meaty, fleshy textured dish but not using animal protein. We used various cooking techniques and ingredients with the texture we wanted to achieve to make this possible.

Crush: Can you tell us about bottarga?

Arno: This is an ancient ingredient first used by the Arabs and Greeks. The technique is a lengthy process that takes weeks to complete.

Fish roe is salted, soaked, rinsed and then hung to dry cure for weeks until the right consistency is reached. This product is generally made with bluefin tuna or mullet roe, but we use snoek roe which is locally sourced. 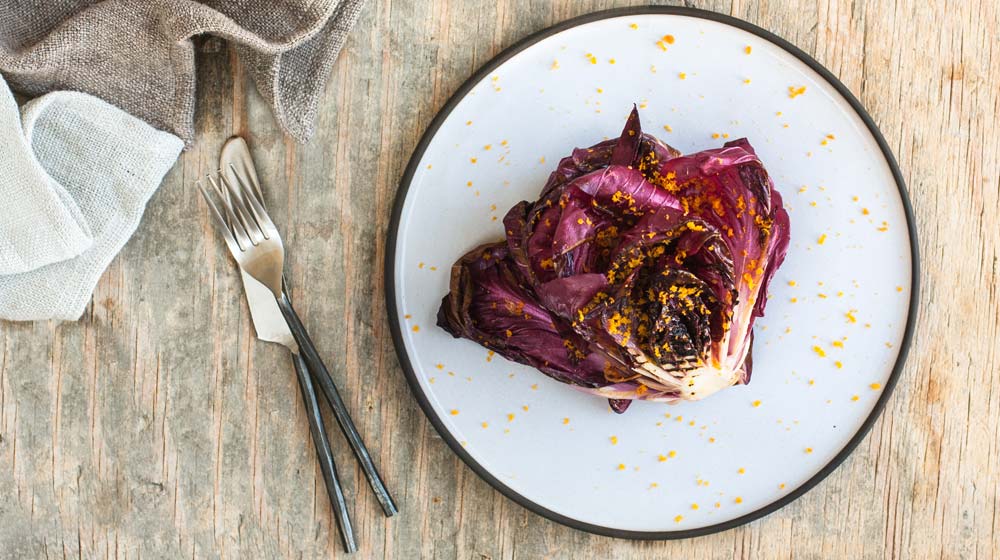 Serves: 4
Difficulty: Challenging
Preparation time: 1 hour plus 3 weeks for the bottarga
Cooking time: 30 minutes plus overnight for the peppers

Snoek Bottarga
Start the bottarga about 2 weeks before you wish to serve the dish.

Make a salt brine by placing the salt into a container with enough water to cover the snoek roe and stir to dissolve. Place the roe into the brine and leave to soak overnight in the fridge. The next day, remove the roe from the brine and pat dry using paper towels.

Pour a good layer of salt onto a shallow roasting tray and place the roe onto the salt, rolling it over to coat well. Place on another roasting tray or baking sheet lined with a lot of paper towel. Leave to cure, uncovered, in the fridge for about 7 days. You’ll need to change the paper towel every so often as the salt draws out a lot of moisture. Also take care to resalt the snoek roe if they lose their salt layer – this is important for the curing process. After the 7 day period, brush the salt layer off with a small wet cloth and leave to air dry for about 2 weeks. You can do this by simply leaving the roe uncovered and out of the fridge until its nicely dried. Alternatively, if you have a biltong maker, you can hang it as you would biltong but without the heating lamp on.

Make these the night before you wish to serve.

Get a wood fire going if you can and roast the peppers until they are nicely coloured and cooked through. If you don’t have a wood oven, simply preheat the grill, rub a little oil over each of the peppers and place under the grill to roast. When they are a dark colour, remove from the oven and place in a bowl. Wrap the bowl in cling film, ensuring that no heat escapes and leave to cool.

Once the peppers have cooled, remove the cling film and peel off the skins. Remove the seeds and slice into strips. Place in a single layer in shallow roasting tray, along with the garlic and ginger and pour enough oil in to barely cover the layer of peppers. Place in the oven to confit overnight, until they are delicately tender.

On the day you wish to serve, smoke the oyster mushrooms by setting up a smoker if you have one and smoking the oyster mushrooms. Alternatively, make your own smoker by using a roasting dish large enough to fit a trivet or cooling rack. Lightly sprinkle a thin layer of wood chips (available at any hardware store) over the bottom of a roasting tray and set a small portion of the chips alight. Gently blow out the flame ensuring that a bit of smoke begins to waft. If there isn’t enough smoke, simply light the chips again and blow out to make more. Place the trivet or cooling rack over the wood chips and place the mushrooms on the rack. Cover the homemade smoker with tin foil and leave to smoke for 5 minutes.

Brush the radicchio with oil and place onto the heated grill pan for 2-3 minutes on each side until softened but not completely cooked through. Remove from the pan and season.

Very carefully lift up the leaves of the halved and grilled radicchio and stuff some peppers and mushrooms in between the leaves, following the natural layers of the leaves. Place each halved radicchio on each plate and using a microplane, finely grate the snoek bottarga over the dish.

To make a reservation for this special new menu, call  021 876 2116 or visit the website for online bookings. 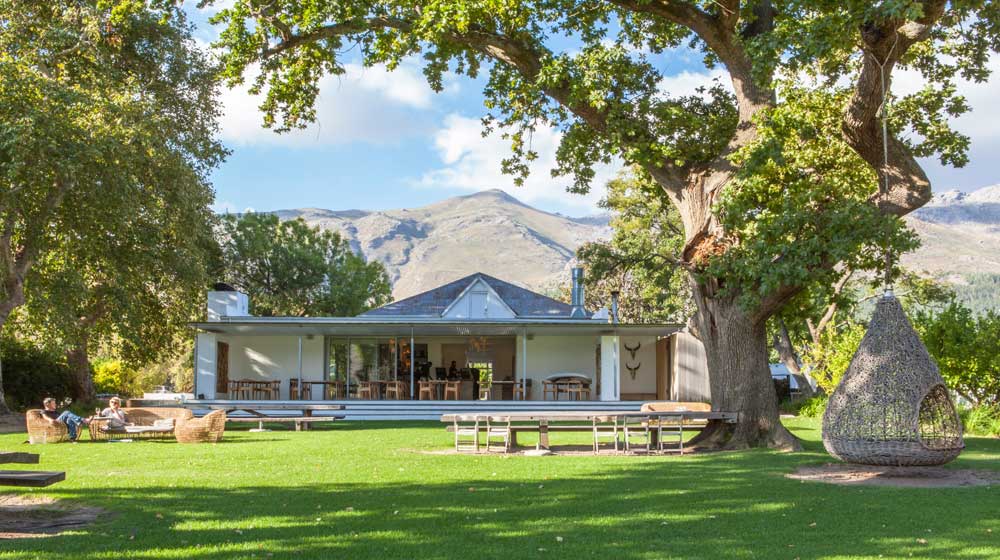