We’re excited to introduce Nespresso’s newest Barista Creations range – an offering for the portion of the population that enjoy their coffee with milk. These expertly crafted-blends are a result of 6 years of intensive studies to deliver the dreamiest capsules to lovers of good milky coffees.

We explore the Chiaro, Scuro and Corto blends from the Barista Creations range together with decadent recipes that highlight each blend.

6 Years in the Making

Nespresso’s development team experimented with 18 coffee origins from around the world, focusing on the techniques of roasting and grinding, to perfect a milky coffee at home with the Nespresso milk machines.

“Our team, comprising coffee roasters, sensory experts, professional baristas, food scientists and engineers, embarked on a journey of exploring coffee and milk interactions to create the finest coffee blend to be drunk with milk,” adds Karsten Ranitzsch, Head of Coffee at Nespresso. 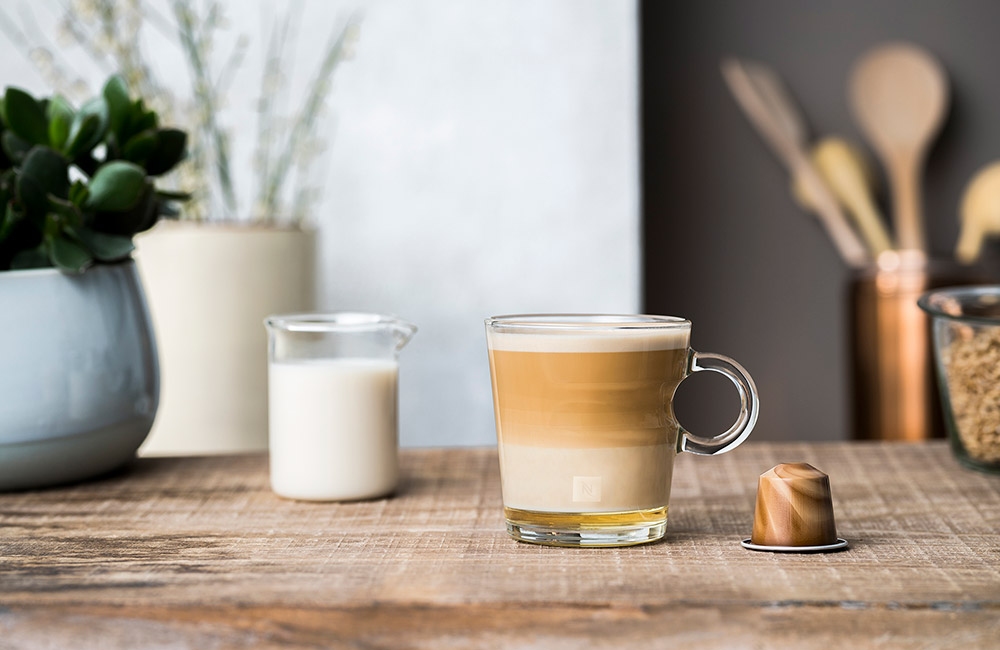 Through sophisticated trials, around 20 000 cappuccinos were tested and over 120 coffee prototypes were produced. The result is the new permanent Nespresso Barista Creations range, designed to match every taste, whether you enjoy your coffee with full-fat dairy milk or prefer to use dairy-free options like oat and almond milk.

Scuro, meaning “dark” in Italian, is inspired by baristas in Melbourne – they are the masters of robust roasts and understand the perfect balance between milk and roasted coffee notes.

The Scuro is designed to show you how intense your coffee can be while staying beautifully in balance with milk.

The Scuro is best served as an intense Cappuccino or Latte Macchiato. We use this bold blend to make these brioche doughnuts. 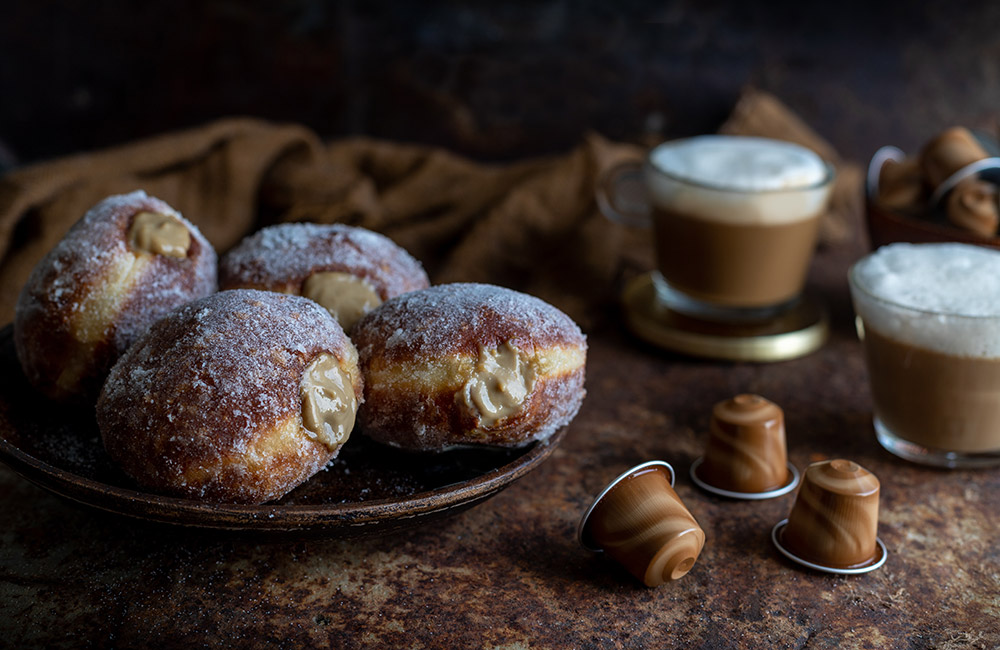 These delicious doughnuts are filled with a coffee crème pâtissèrie flavoured with the intense Nespresso Barista Creations Scuro blend.

Add the milk, coffee and vanilla to a medium-sized saucepan over medium-high heat. Bring to a boil while stirring and then remove from the heat.

Mix the castor sugar, egg yolks, flour and cornflour in a bowl until combined. Drizzle half of the warmed milk into the egg mixture while stirring to temper the eggs. Once incorporated, pour the egg mixture back into the pot and return to low-medium heat.

Cook the mixture for roughly two minutes while stirring continuously to prevent it catching until it begins to thicken into a glossy crème pâtissière.

Remove from the heat and allow to cool slightly before pouring it into a bowl. Cover with plastic wrap and cool before placing in the fridge until needed.

Add flour, castor sugar, yeast and salt to the mixing bowl of a stand mixer and whisk with a fork to combine.

Add the eggs, water and lemon zest and set on medium with the dough hook attachment. Mix for 5 minutes to combine scraping down the sides if needed.

Add the butter in while mixing, 2 cubes at a time, and let it incorporate into the dough. Mix for another 6-8 minutes until the dough has come together and is glossy and elastic.

Scoop the dough out into a large bowl and cover with a kitchen towel. Allow to proof in a warm area for 1 ½ -2 hours until it has doubled in size.

Repeat this motion until the dough forms into a ball. Place the balls onto a floured tray and lightly dust the tops then cover with a kitchen towel. Make sure you give them room to grow on the tray because they will double in size again during the second proof. Repeat until all the balls are shaped and proof for another hour or until doubled in size.

Half fill a large Dutch oven pot or a deep fryer with canola oil and set it to high heat.

While the oil is heating, add the castor sugar to a large bowl and place a few sheets of kitchen towel onto a dinner plate/baking tray to drain the doughnuts before dusting. Also, have a large container (a loaf tin works well) to stack the sugared doughnuts in while you continue frying.

Using a dough scraper or spatula, gently pick up the balls one at a time and carefully drop them into the oil. Fry 4 at a time for 2 minutes per side.

Remove the fried doughnuts from the oil and place them on the kitchen towel to remove excess oil before rolling them gently in castor sugar. Stack the sugared doughnuts seam side up into the container and repeat the process until all the doughnuts are fried and sugared. Be sure to check the oil temperature after each fry. You need to maintain a 185-190 ºC frying temperature.

Once all the doughnuts are fried, use a sharp knife to slit a hole in the centre and then gently work it open.

Fill a piping bag with a large star or round nozzle and pipe the coffee creme into the doughnuts until they are all filled. Handle carefully and stack upright.

Re-dust with castor sugar if needed and serve with a Nespresso Barista Creations Scuro cappuccino.