This Heritage month we’re celebrating local wine variety Pinotage. We delve a little deeper into its history and what makes it so unique.

What’s in a name?
The name Pinotage, comes from the combination of the words Pinot Noir and Hermitage (Cinsault was known previously as Hermitage). It is believed that this blend was used to add some strength to Pinot Noir because of its fragility and because it was difficult to grow in South African conditions. The Cinsault grape is very resistant to parasite, making it a very reliable variety to grow in most regions of the world. However, the best Pinotage wines can still be found in South Africa, close to where it originated. The Pinotage grape is a small, early-ripening grape that contains high levels of sugar.

A little history
Abraham Perold, the first viticulturist at the University of Stellenbosch, first experimented with Pinotage in 1925. Pinotage was first grown commercially in 1941 by CT de Waal at Myrtle Grove, near Sir Lowry’s Pass. Pinotage received acclaim for the first time when a Bellevue Pinotage was awarded Champion Wine at the 1959 Cape Wine Show. In 1961, a Pinotage from Kanonkop Wine Estate won the same prize. The Kanonkop Pinotage was the first commercial wine to use the name, Pinotage, on a label. The success of these Pinotage wines prompted many farmers to start growing large quantities of the grape which eventually led to its downfall.

By the 1980s, Pinotage had lost popularity due to a mass of low-quality wines which became available due to the Pinotage grape’s naturally high yield potential. This led to more wine being produced and, in turn, more profit but questionable quality.

By the end of the 1990s, winemakers decided to improve the quality of Pinotage by taking better care in the preparation and cultivation of the grapes and to produce less wine but of higher quality. The renewed popularity of Pinotage was spurred on by the 1989 Kanonkop Pinotage winning the Best Red Wine award at the prestigious International Wine and Spirits Competition in London, in 1991.

The Different Personalities of Pinotage
It’s relatively easy to make a Pinotage wine, but it’s much harder to make a good Pinotage wine and thus great care needs to be taken when producing this South African classic.

Typical flavours of a good Pinotage are spice, chocolate, leather, berries and hints of other fruits. The colour of this wine usually ranges from deep ruby to brick red. The Coffee Pinotage is an interesting variety of Pinotage and continues to grow in popularity.

The unique coffee flavour comes from using heavily toasted oak staves in the tanks and by using a specific variety of yeast in the winemaking process. Mellasat Wines produced the world’s first white Pinotage in 2007.

Most Pinotage wines are easy drinking but some have an ageing potential of up to 20 years. Be careful when ageing Pinotage as not all varieties are made for ageing and ageing could possibly ruin the wine. Pinotage is often combined with Cabernet Sauvignon and Shiraz to create distinctive blends of high-quality red wines.

This grape variety likes warm but not too hot weather. If the weather is too hot, it can negatively impact on the whole harvest by developing a high level of acetone which may result in aromas of burnt rubber or rusty nails – not what the winemaker is looking for. The bulk of Pinotage is still grown in the Western Cape wine regions of Stellenbosch and Paarl. Limited success in its cultivation has been achieved in areas outside of South Africa with New Zealand and Zimbabwe being the largest producers of Pinotage outside of South Africa. 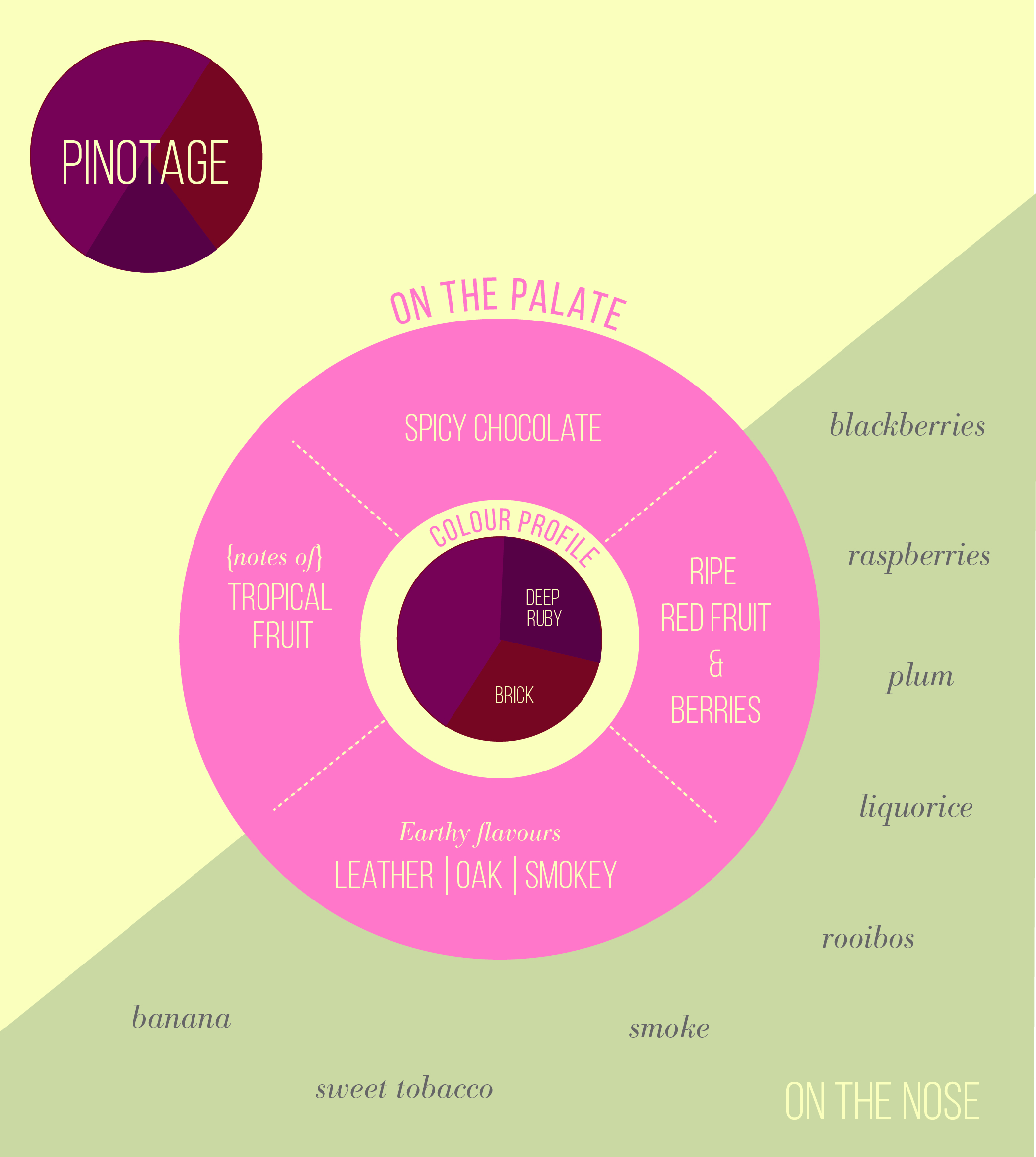 These are just a few of our favourite Pinotages…

Groot Constantia is South Africa’s oldest wine-producing estate and the only Pinotage grower in the Constantia Valley. Groot Constantia has been rated as the Top South African Wine Producer for 2016 by The South-African Wine Index (SAWi). The uniquely suited terroir recently earned it the coveted Novare Terroir National Award. The Pinotage 2013 was awarded the Top 10 ABSA Pinotage award and the 2014 a double-gold at the Top 100 SA Wines 2016 Awards.

In 1685 Cape Governor Simon van der Stel built this farm on Table Mountain, which he named Constantia. Groot Constantia received world acclaim from Napoleon, Bismarck and King Louis Philippe of France who was the biggest single buyer of ‘The Sweet Wines of Constantia’ made in the Cloete Cellar.

The Groot Constantia Pinotage 2015 (imminent release) is a very expressive and concentrated wine, the result of warm and dry conditions of that vintage year. The Pinotage shows raspberries, strawberries and ripe plums on the nose, framed by sweet toasted oak. The ripe red fruit and toasted oak flavours follow on the palate. The wine has beautiful concentration with soft tannins and a long elegant finish. Enjoy the Groot Constantia Pinotage 2015 with a Chicken Bobotie, Beef Shin, Tomato and Olive Stew or Curry Potjie.

Enjoy the new Visitor Route Experience this summer where one ticket gives you entrance into the Manor House museum, original Cloete Cellar, a self-guided cellar tour, wine tasting and crystal glass. Groot Constantia is open 7 days a week and offer wine tastings, chocolate and wine pairings and has two restaurants on site: Jonkershuis Restaurant and Simon’s Restaurant. Buy your wine on the estate, order online and from top wine houses and purveyors internationally. 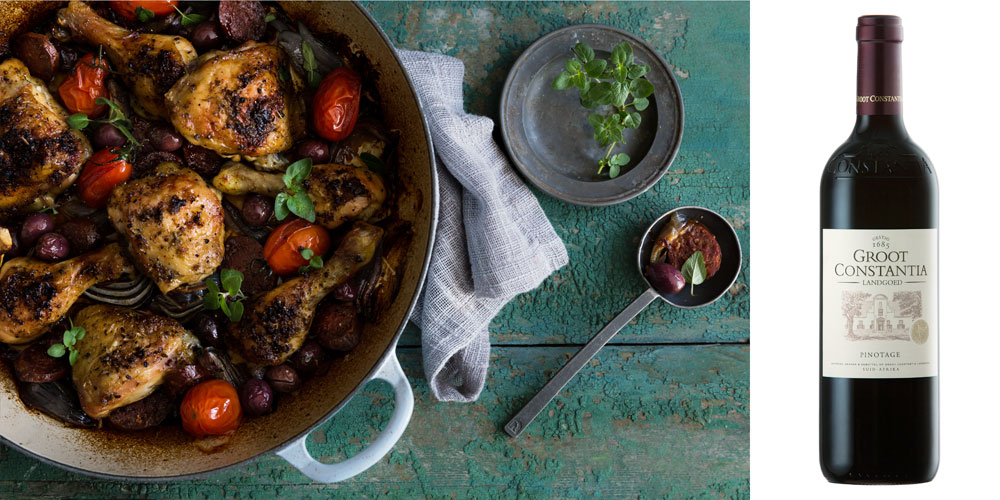 KWV The Mentors Pinotage 2013 is made in the same cellars where the ‘father of Pinotage’, Abraham Perold, winemaker at KWV at the time, did pioneering work in the field of establishing Pinotage as a uniquely South African cultivar. It reflects the true varietal characteristics of a modern-styled Pinotage, with an abundance of strawberries, black cherries, plums, and hints of fruit cake and marzipan on the nose. The intense concentration on the palate is the result of a combination of sweet fruit and well-integrated oak. The silky smooth tannins contribute to the juicy, round and seamless finish.

In making this wine, the KWV team of winemakers, under then chief winemaker Johann Fourie, followed a three-step selection process to ensure only the best quality fruit was chosen for fermentation. This wine, which earned Fourie the Diner’s Club Winemaker of the Year award in 2015, was matured in barrel for 18 months – 85% of French origin and 15% American.  A 70% portion of the barrels was first-fill.

The KWV The Mentors Pinotage can be enjoyed now, but will also age well for the next four to six years and pairs well with a variety of meat casseroles, roasted game, Cape Malay curry dishes, cheddar and blue cheese. 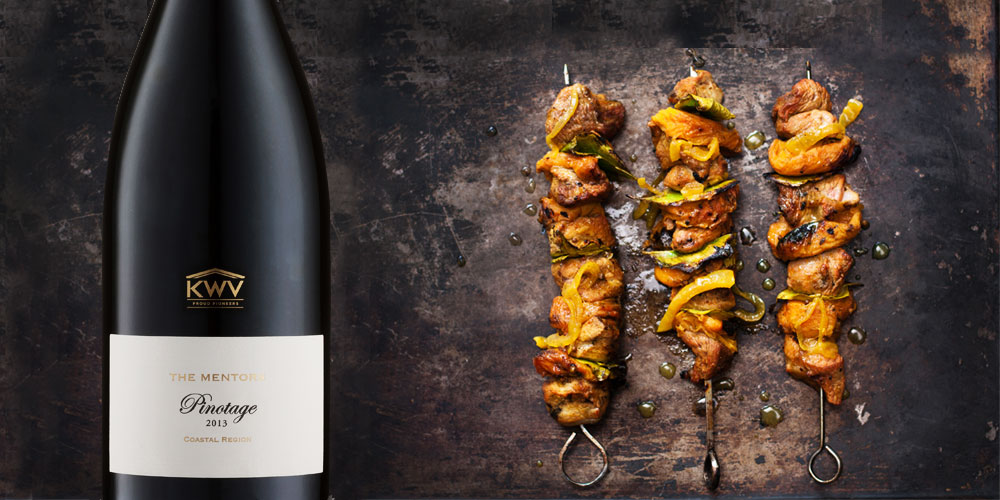 Boland Cellars are ‘regional specialists’ for the Paarl are and are one of the most acclaimed and awarded wine producers of the area.

Every season provides a unique range of One Formation wines. Exceptional blends are created from regional varietals, based on the best that each season has to offer. With only one batch made of each blend, wine lovers can look forward to a singular vintage every year.

This wine consists of Pinotage, Shiraz and Grenache which was blended before ageing in French oak barrels. An elegant red wine with prominent dark berries, spicy and savoury fruit flavours. The Pinotage was cold fermented and then blended with the Shiraz and Grenache to ensure a long, clean finish. 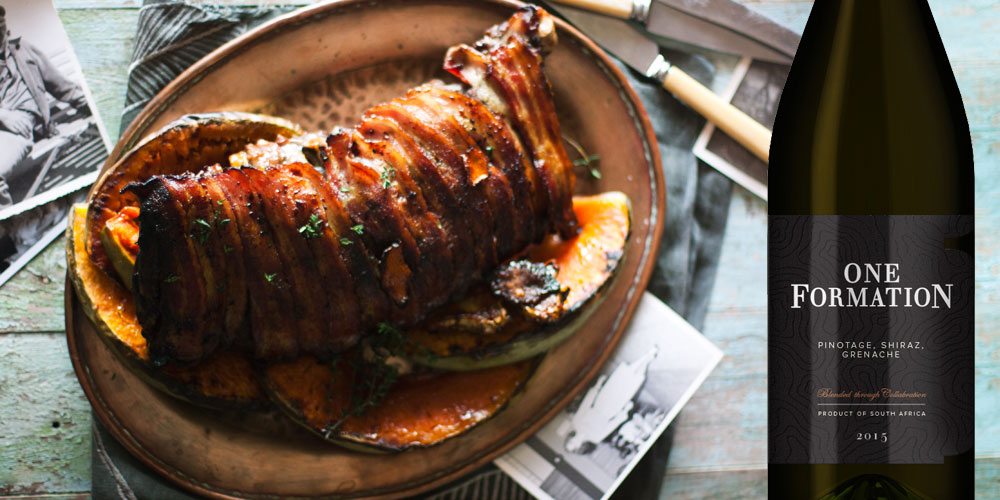 Tucked away in the Witzenberg and Winterhoek mountain ranges is the town of Tulbagh, home to some of the country’s finest wine estates. Nestled around 5 kilometres outside of Tulbagh is the Lemberg boutique wine estate.

Established in 1978, Lemberg became known for producing excellent, handcrafted wine, as well as for being the smallest wine estate in the Western Cape.

The grapes for ‘Spencer’, Lemberg’s 100% Pinotage, are picked in the early mornings to maintain the night temperature, then were pre-chilled to 4 °C before being destemmed and hand sorted. The grapes underwent a 48 hour cold maceration period before fermentation to allow for soft tannin and colour extraction. The wine was aged in first and second fill 225L and 300L French oak barrels for 12 months before being bottled unfined and unfiltered.

The nose shows raspberry and dark cherry aromas that are backed up by a hint of clove and some earthy notes. The cherry follows through on the palate with fine tannins, integrating well to give the wine a complex structure that will age very well.

Drinking well now, and will develop well for 8 years. 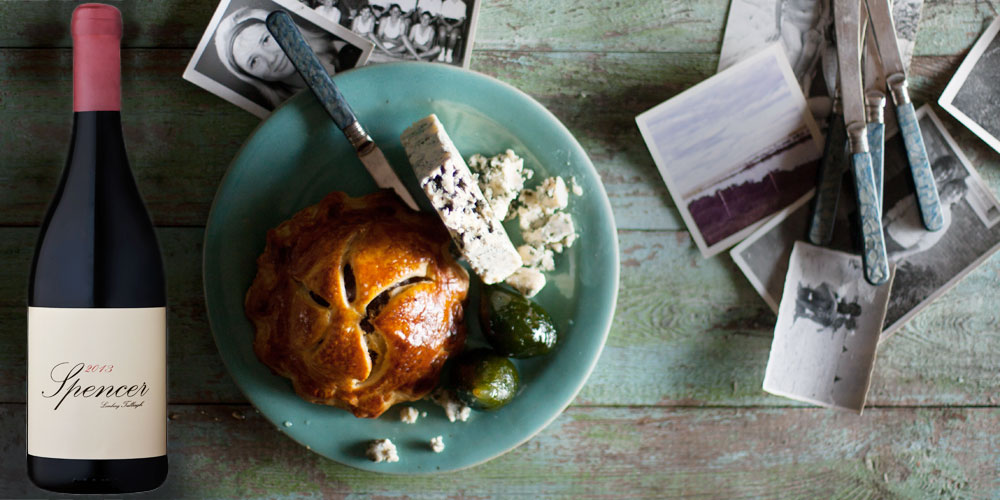