For some, a traditional Christmas might include a big turkey, but here in South Africa, we tend to do things a little differently. Christmas feasts usually include a delicious spread of different meats, but there’s just something about a gorgeous glazed gammon that gets us salivating. It’s the perfect balance of sweet and salty, the fat-to-meat ratio ensures a succulent roast, and it’s ideal for feeding a crowd. But have you ever wondered how the tradition of eating gammon at Christmas came about?

Why We Eat Gammon at Christmas

Today, Christmas is recognised as a Christian religious holiday, observed by people from all corners of the world. Families from near and far gather, and partake in festivities to commemorate the birth of Jesus Christ. But not all Christians actually celebrate Christmas, as it’s believed to have Germanic pagan origins. As we know, many Commonwealth countries have adopted European traditions, and eating Christmas Yule ham is one of them.

In Scandinavian culture, momentous occasions like weddings and banquets were often celebrated by providing offerings to the Norse gods; guzzling wine, followed by drunken dancing and gorging food formed part of these merry, moveable feasts.

Legend has it that Freyr, also known as the Norse god of fertility, peace and sunshine, brought prosperity to people. In exchange, they would sacrifice a wild boar or ‘sónargǫltr’, to appease him.

This Germanic ritual was eventually phased out when pagans converted to Christianity, but some of the traditions stuck and adopted new meaning. Interestingly, Freyr is also the god of harvest and wealth, so you could probably say that he was ‘high on the hog’. Although Christmas Yule ham differs from the traditional gammon eaten at Christmas, this ancient celebration has influenced British, and later, South African festive traditions.

Now that you know the origins, here’s our easy recipe for making perfectly glazed and gorgeous gammon this Christmas. 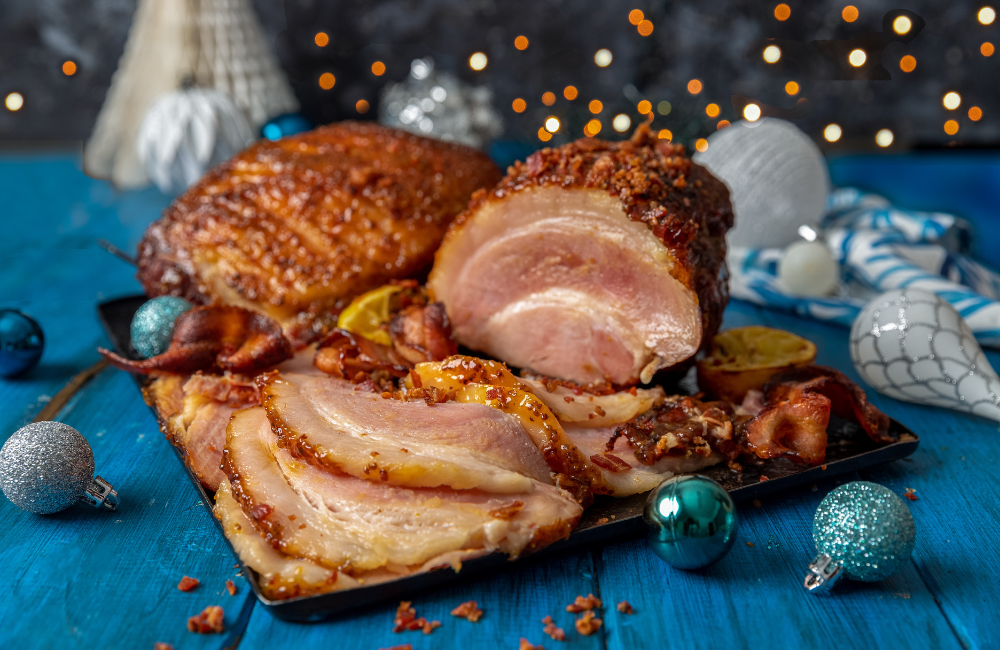 Place all of the ingredients for the gammon into a large pot and fill it with water until the gammon is submerged. Bring the water to a boil, then turn down the heat to low and gently simmer the gammon for 2 hours. Top up with hot water as needed during the cooking process. 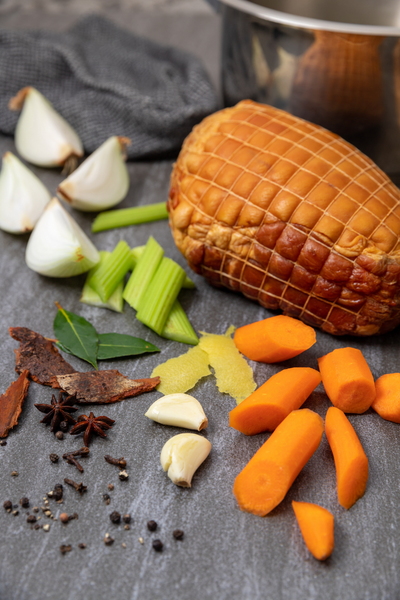 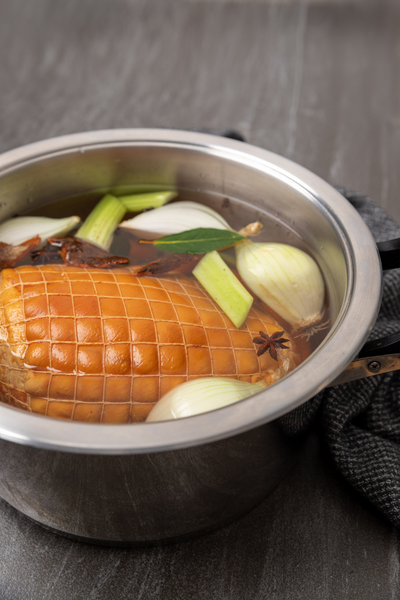 Bacon Crumble: Preheat the oven to 200 ºC. Line a baking tray with paper and arrange the bacon on the tray. Bake in the oven for 20-25 minutes or until crispy. Alternatively, cook the bacon in an air fryer, if you have one, until crispy. Once cooled, chop it into a fine crumb. Set aside the bacon crumble.

Maple Mustard Glaze: Place a small pot over medium heat. Add all of the ingredients for the glaze and mix well to combine. Bring to a boil, then turn off the heat. Once slightly cooled, taste and add and adjust seasoning as needed. 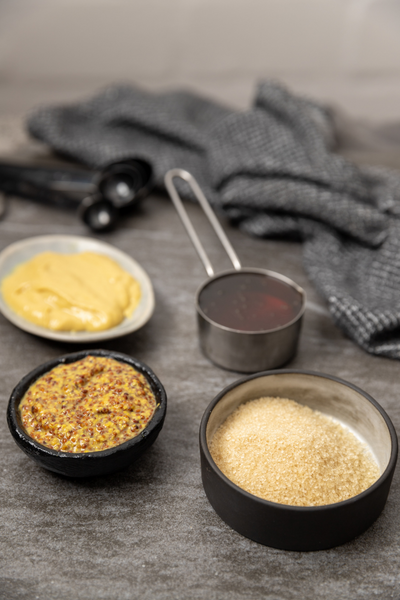 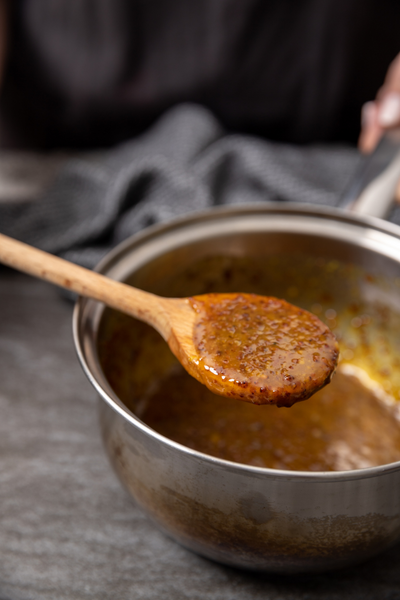 Gammon: After 2 hours, remove the gammon from the pot and place it onto a rack to cool slightly. Preheat the oven to 200 ºC. Cut the netting off the gammon, then carefully remove the skin by simply it peeling back. To assist, you can run a sharp knife under the skin as closely as you can – the idea is to keep as much of the fat on the gammon as possible. 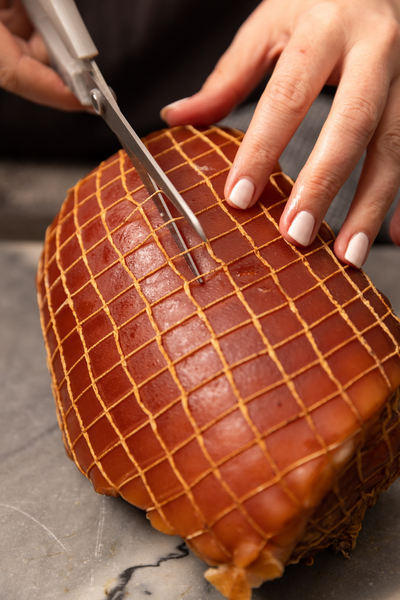 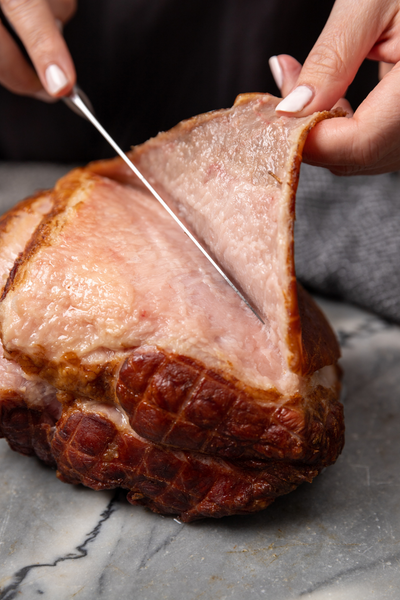 Using the tip of a sharp knife, score the fat diagonally in lines about ½ cm apart. Place the gammon on a roasting rack and use a pastry brush to paint it with a generous amount of maple glaze. Grill the gammon for 10 minutes, then give it another painting of glaze and bake for a further 10 minutes until it has caramelised and is bubbling. 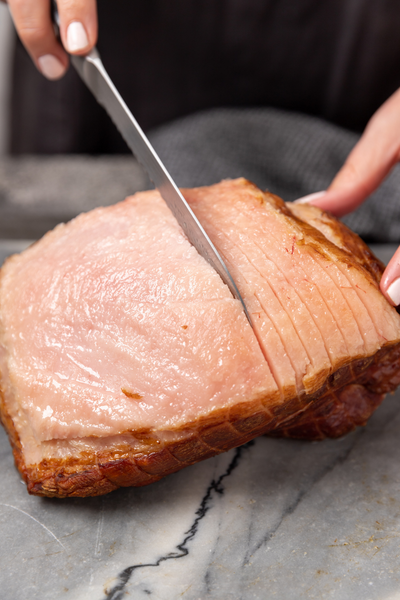 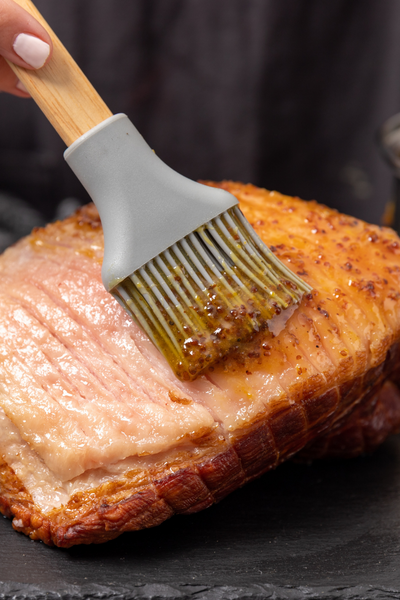 Once the glaze has caramelised all over, remove from the oven and sprinkle with bacon crumble. Allow to cool just slightly and then slice and serve with your favourite festive sides. 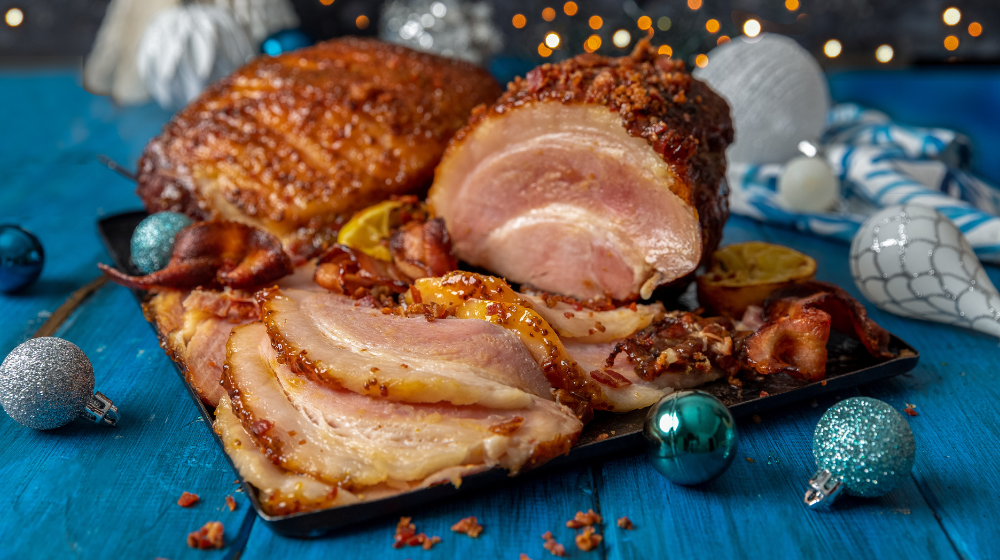