Life for Ma Mère Confections Gets Even Sweeter

We’re going to start with this: pink Steri Stumpi macarons. Do we have your attention now? Yes, such a beautiful creation actually exists and it’s all thanks to the genius that is Lexi Bird, and her team at Ma Mère Confections, which is dedicated to all things macarons, nougat, chocolate and nut brittle. They’ve recently moved into a newer, shinier space in Maitland and are redirecting the business focus to stock stores in Cape Town and Johannesburg, as well as putting together the wedding favours of your dreams.

Ma Mère came into being when Lexi, fresh out of Red & Yellow School of Advertising and Design, packed up her life in Cape Town and moved to Durban where she found work at an advertising agency. Being a person who juggles many balls at the same time, she found herself doing art directing, styling and photography. Realising that she hated the advertising side of the work, she left the agency and started a little styling business, while trying to figure out exactly what she wanted to do with her life. The styling work, however, didn’t really do it for her and she made the move, heartbroken, back to Cape Town. She had no money, no job and no set plan but did have a smile on her face and a love for cooking and being in the kitchen, which led her to being taught how to make nougat by her stepmother who was a talented ‘nougatier’. 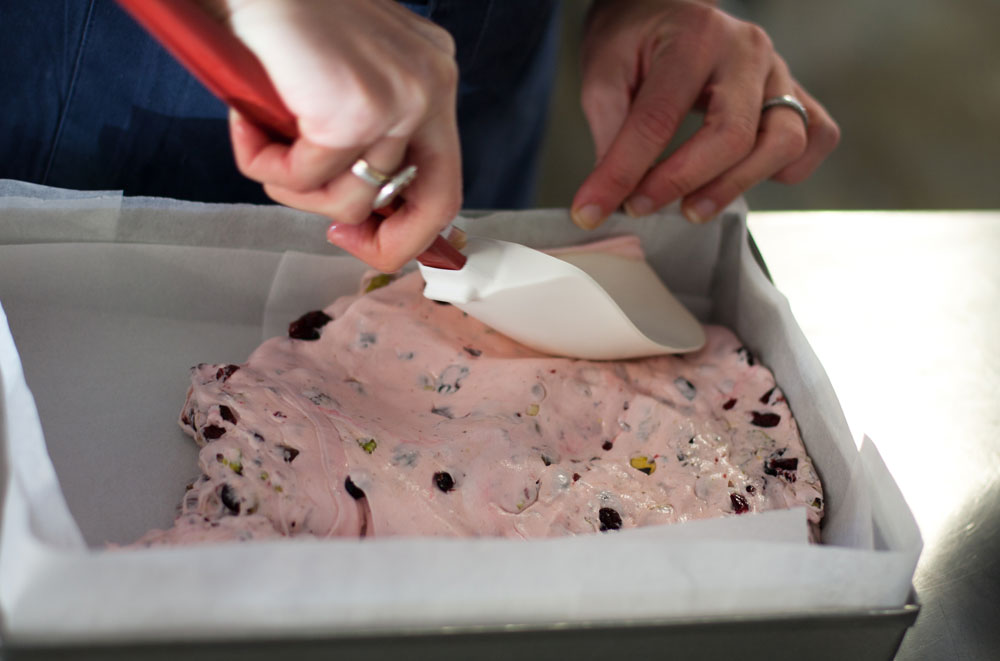 Not long after that, Annalize Buchanan, well-known caterer and an old family friend, had a wedding to cater for and had been dropped by her nougat supplier. She asked if Lexi could make the nougat for the wedding and Lexi thought “why not?” The next week, Annalize called again for more nougat, which was a real turning point for Lexi. She took a stall at The Old Biscuit Mill, and committed to putting all sorts of treats together for it every week.

As time went on she added more to her repertoire and just like that, the brand began to grow. She started getting orders and lots of them, and took over a small space near The Biscuit Mill. From there she moved into the mill, where she set up a little factory and a store, and hired a few trusty sidekicks, including Heloise Tyszowiecki, who Lexi describes as the ’numbers and systems‘ to her super creative brain. 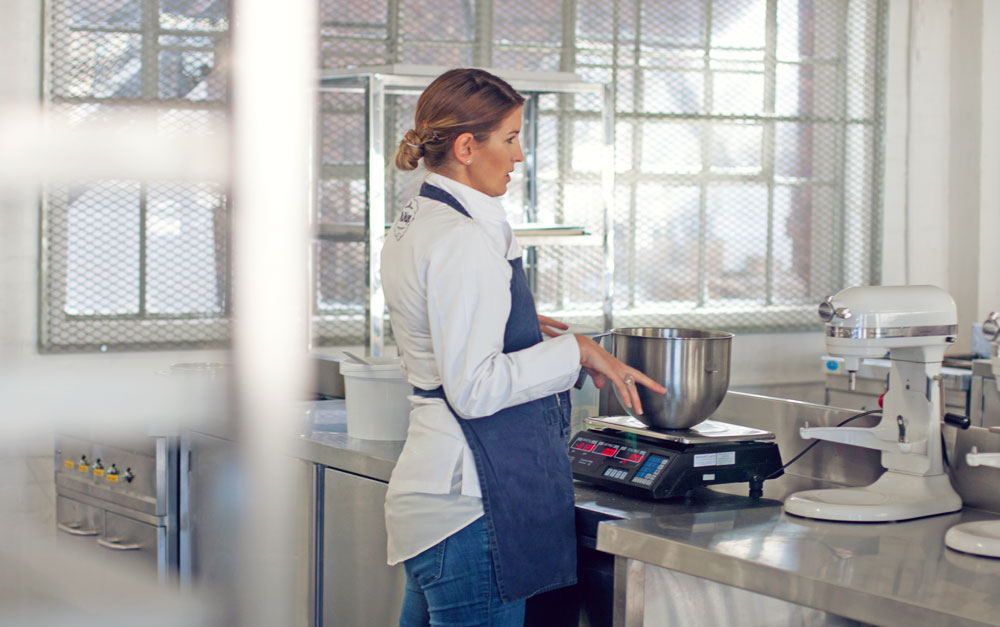 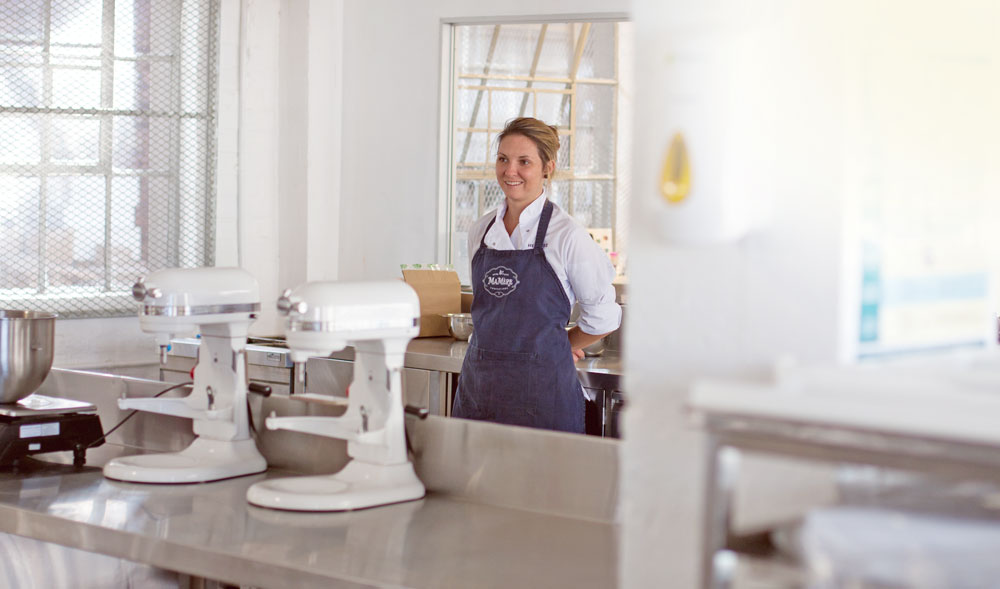 It’s worth mentioning that the name of her business is an ode to where she began – ‘ma mere’ means ‘my mother’ in French and honours the inspiration Lexi got from her own mother when they made fudge together when Lexi was a child, as well as her stepmother, who taught her the art of that all-important nougat.

Their space at the mill was a busy and bustling one – not only were Lexi and her team creating macaron masterpieces for weddings and other such orders, but they were stocking and managing the shop front, dealing with customers and perusers – of which there are many in the Biscuit Mill. While Lexi loved the store, and thought it was a great way for her learn about her customers and their tastes, the flourishing business soon grew out of space at the Biscuit Mill. She decided to move to a bigger space where they could focus on creating beautiful confections without having the logistics of the store to deal with.

Right now the Ma Mère team is working on a number of huge projects. They’re making numerous wedding favours (read: not wedding cakes), providing ‘white label’ products where they produce items for other brands, and are still supplying wholesale goods to a few stores across the country. Regardless of all this growth, Lexi is still using locally and responsibly sourced ingredients, never once sacrificing her standards or beliefs for the sake of cutting costs. She’s also never lost touch with her inventive side when it comes to flavour combinations. That pink Steri Stumpi macaron is a nod to her childhood but she also pairs flavours such as white chocolate and basil, and even has a speckled egg-topped chocolate nougat for Easter. Everything retains that essence of fun and lightheartedness.

What’s next for Lexi and co.? Firstly, export. Ma Mère is currently mapping out a plan to get their delicious brand into the United Kingdom and beyond, which is no mean feat as there’s a mountain of paperwork and safety procedures that have to be put in place first for them be able to do that. She’s also six months pregnant with her first baby – Heloise will have a tough time encouraging the determined, hard-working business owner, Lexi to stay on maternity leave for at least a month.

Lexi has paved her way to success through slow and meticulous hard work. Every single decision she makes is considered and double checked before any money is spent. Her business has always come first – she and her husband only went on their honeymoon to Thailand last month, after two and a half years of marriage.

Over the past five years, Ma Mère has gone from Lexi’s kitchen to a stand at a market, to a small shopfront and factory, to an even bigger factory, all the while retaining that homemade feel. Every bite of nougat, nut brittle or fudge tastes like it has been crafted with love and care and her macarons are nothing short of perfection.

Lexi Bird and her team at Ma Mère are masters of their trade and the world is definitely a much sweeter place with them around. 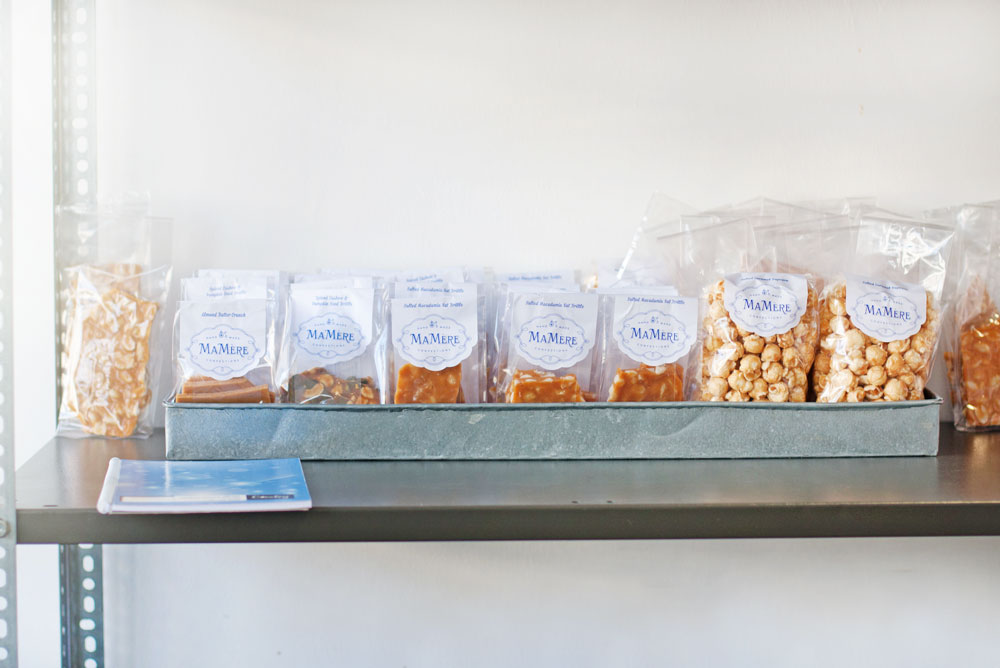 Ma Mère is available in Cape Town at Fabricate in Gardens, Four & Twenty in Wynberg, Hillcrest berries in Stellenbosch, Free Range Farmstall in Kommetjie and The Foodbarn Deli in Noordhoek. In Johannesburg they are available at Thrupps, the Olivedale Spar in Randburg, the Ferndale Spar, the Hobart Spar in Bryanston, the Crowthorne Spar, the Broadacres Spar, The Flower Boss in Bryanston, Fourways Flower Market in Pineslopes and Jacksons Real Food Market in Bryanston.