A Kitchen Crush in Greenpoint

This kitchen is a modern take on a farmhouse kitchen and is located in a home in a quiet street in Cape Town’s trendy Greenpoint area. Homeowners Paul and Kirsty are both in the hospitality industry so the kitchen was an important feature in the house. Kirsty owns a food consulting company, Source Food, and Paul is a Director of a training company for the hospitality industry. Paul is on the service side, and Kirsty works directly with food so food, drinks and entertaining are a high priority for the pair.

The Victorian-style house was bought by the couple in 2010; the property was very dilapidated and needed a complete renovation, which was exciting for the couple, as it meant they could really do whatever they wanted to. It became apparent though that the kitchen would become the most challenging room of the whole house. The original kitchen was painted 80s yellow; it had old terracotta tiles, awful yellow cupboards and the layout was unconventional and tricky to work in. Kirsty’s brief was that she wanted it to be modern with industrial elements, but still cozy with a farmhouse style to it – it was a challenge! 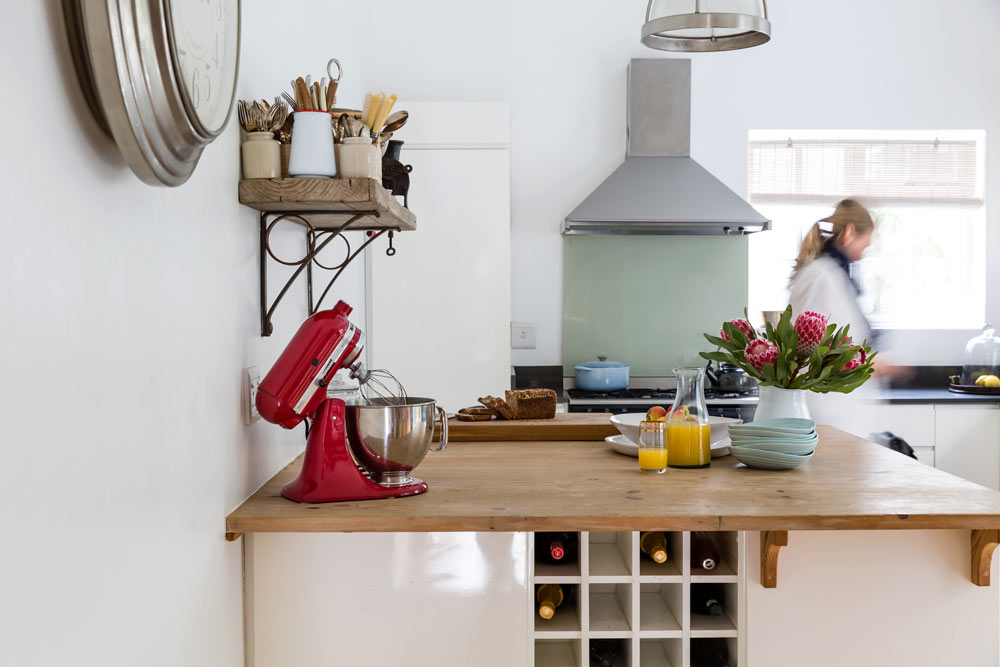 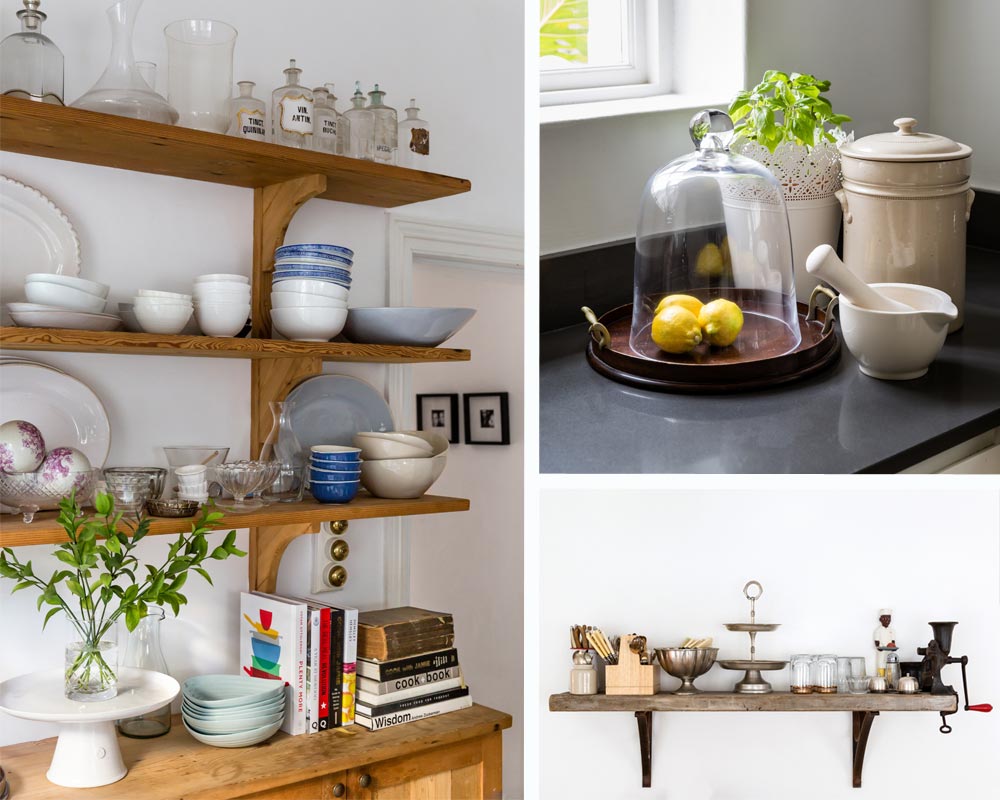 While scouring second hand furniture stores in Woodstock one morning, Paul stumbled across the most beautiful store, Artefect, owned by Shelley Sacranie. Kirsty says, “He came to find me in another store, and said, you just have to see this, it’s your perfect shop”. It was. “I fell in love with a beautiful old mirror as I walked in, and knew that that was what I wanted above my fireplace! From there my relationship with Shelley became a friendship; we would pore over pictures that I screen grabbed off the Internet and she would source items that were similar. We had the same vision for most rooms in the house, so that was quick and easy, but the kitchen was impossible.”

“My business is focused on food and we do a lot of events and catering as well as food styling. We pride ourselves on coming up with innovative ways to market food through experiences – hence the motley collection of crockery; cutlery and interesting kitchen items, I am always searching for new and interesting ways to serve food to make people excited about a brand.” owner Kirsty Rowett.

The kitchen began to take shape around the oversized wooden work counter. They played with the idea of butcher’s blocks and an island, but the room wasn’t big enough for a freestanding island, so they moved it to the side and made it into a counter. Kirsty had to have a large double sink, and really wanted a tap like the ones used in professional kitchens “as they are great for washing vegetables.” The design of the kitchen really flowed from there, keeping in mind the perfect triangle of oven, sink and fridge. The result is a kitchen that is really easy to work in. The bin is hidden under the prep counter, which is handy and the kitchen drawers serve as a pantry, so ingredients are easily at hand. They are anti-microwave which saved a bit of space and left room for the equipment they love – their coffee machine, Magimix and Kitchenaid. 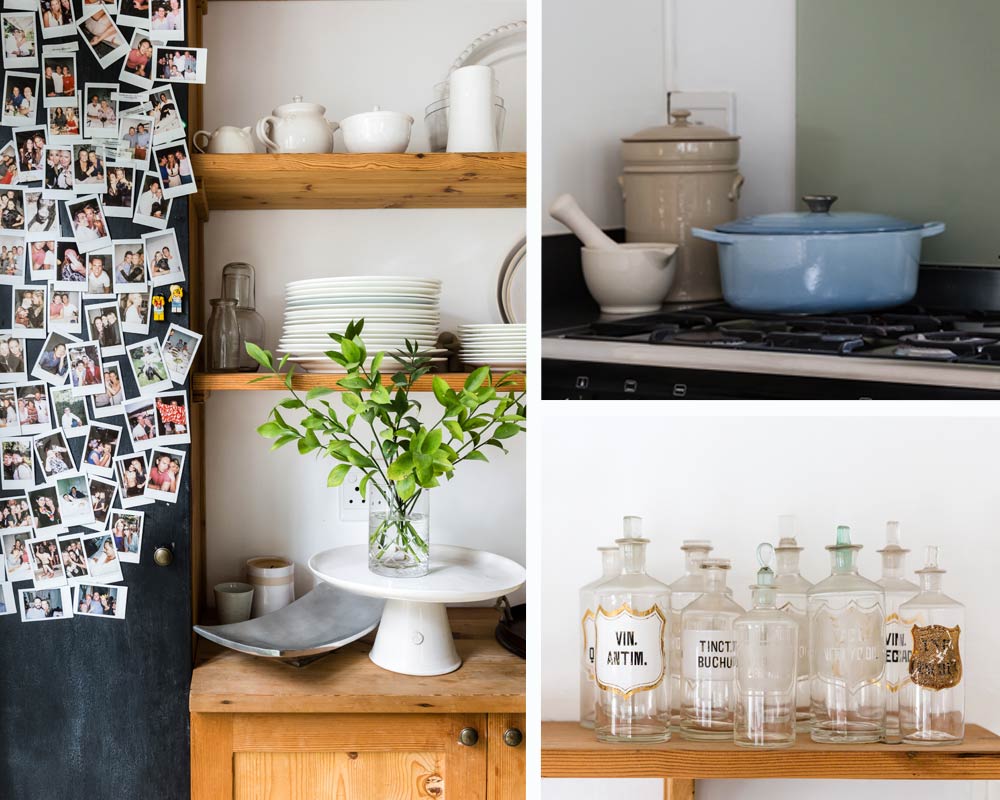 The kitchen was designed to have a lot of people, as well as their dog Max, in it all the time. “We spend a lot of time in the kitchen and entertain a lot (well, we did before we had a baby!). Our biggest dinner party to date has been for 51 guests, and most of them were in the kitchen”. Essentially the kitchen is the central space between the outdoor entertainment area and the rest of the house, so it needed to be functional but comfortable and inviting too.

“I feel as though we have achieved what we set out to do within this space; it is a wonderful place to cook together as a couple and to enjoy a relaxed glass of wine. It also reflects our personalities; on display are pieces of crockery and cutlery that we’ve picked up along our way and which hold memories for us. All in all, the space feels like home and that is the most important thing of all.” 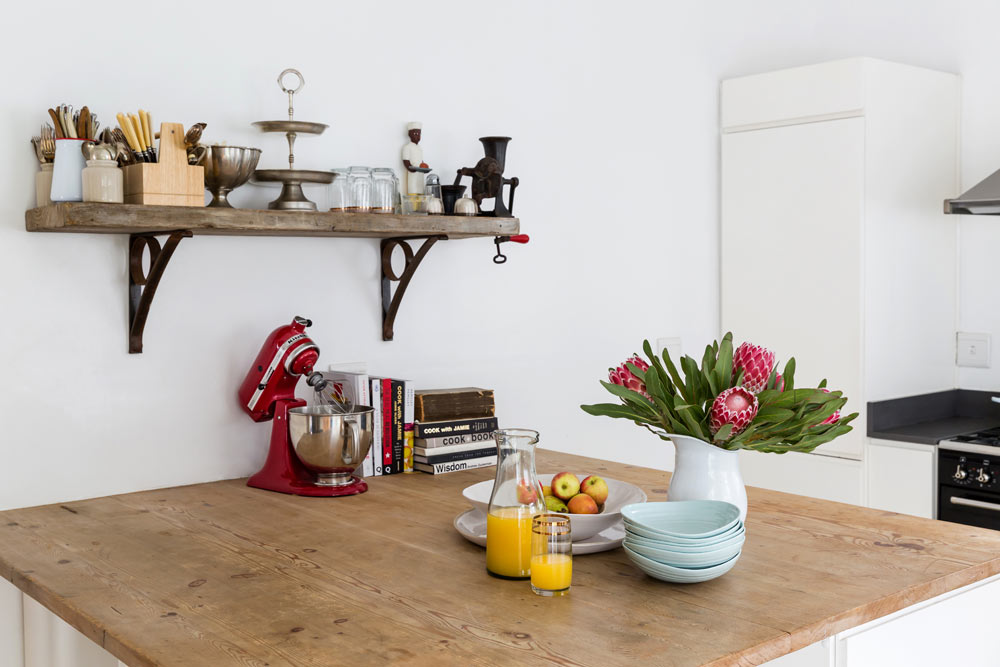