Celeriac is a rather misunderstood vegetable. Lumpy and odd-looking, you’d hardly look at it and say “wow, celeriac, I’d like to eat you”. But, when faced with the intimidating celery-root, one must remember what mom used to say – never judge a book by its cover. Celeriac is actually quite delicious, and has an earthy, mild celery flavour. Generally you’ll find in supermarkets prepped and cleaned, but if not, it’s a simple case of trimming the root and peeling away the hard outer skin. It has a hearty, substantial, albeit sometimes woody, texture that means you can pretty much cook it anyway you please. Blanch, roast, pureé into soup, even fry, there’s nothing the celeriac can’t handle. If you’re thinking of planting your own (think of all the beautiful celery you’ll have too!), remember that celeriac loves cool weather, but full sunlight!

You don’t even have to cook it, a defining  feature of the classic French condiment celeri rémoulade, where sliced celeriac is mixed with an aïoli. In this recipe, we’ve played with an alternative to pommes Anna, a dish of sliced, layered potato cooked in large amounts (and we mean very large) of butter. Essentially, the celeriac has replaced the potato, which makes these great if you’re trying to give up potato for whatever reason. These are individual ‘Annas’ cooked in a muffin tin, but you could very easily make one large one and slice it when serving. 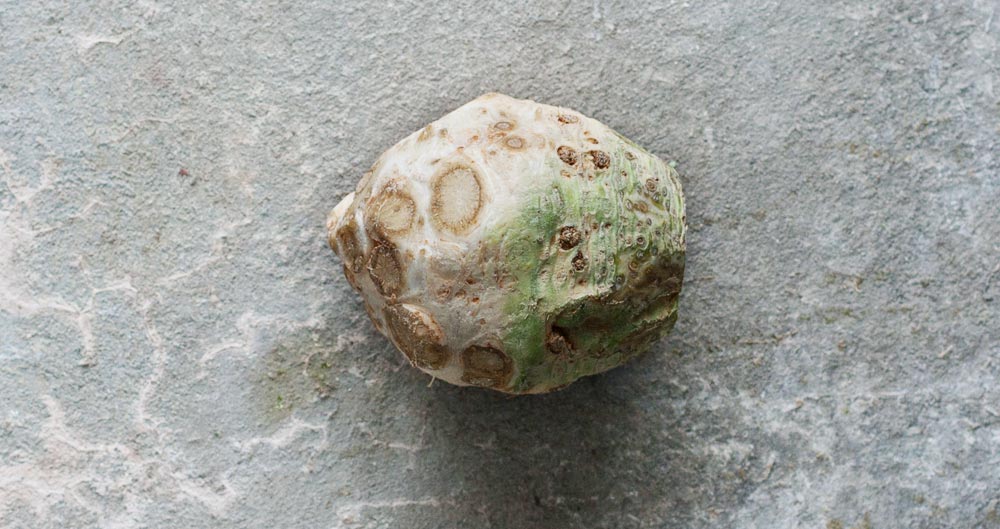 Using a mandoline or a very sharp knife, finely slice the celeriac. If making individual ‘Annas’, use a cutter to cut out the circles to fit into a muffin tin. Add the thyme and salt to the melted butter and mix together. Brush each muffin cup with melted butter, and layer the sliced celeriac, brushing with butter in between each layer. Keep layering and brushing with butter until the pile reaches the top of the pan. Brush once more with butter and sprinkle over a few thyme leaves, if you wish.  (Note: Alternatively, if you would like to make one large ‘Anna’, use a roasting tin and simply finely slice the celeriac as is, and follow the same buttering and layering process.)

Bake in the oven for about 25 minutes or until the celeriac is soft all the way through and the top is lightly browned. Remove from the oven and turn the oven grill on.

Top each Anna with a little grated Parmesan and place under the grill to brown and crisp up further. Remove carefully from the muffin pan and serve immediately.