The Cape Town creative space is unequivocally beaming with young, unique and talented individuals. Ashlee Lloyd is one such creative who is pushing the boundaries of traditional lighting design by combining her love for artisanal crochet and industrial design.

Ashlee speaks to us about growth and struggle, as well as her journey of self-discovery through using her hands and her medium of crochet and lighting. 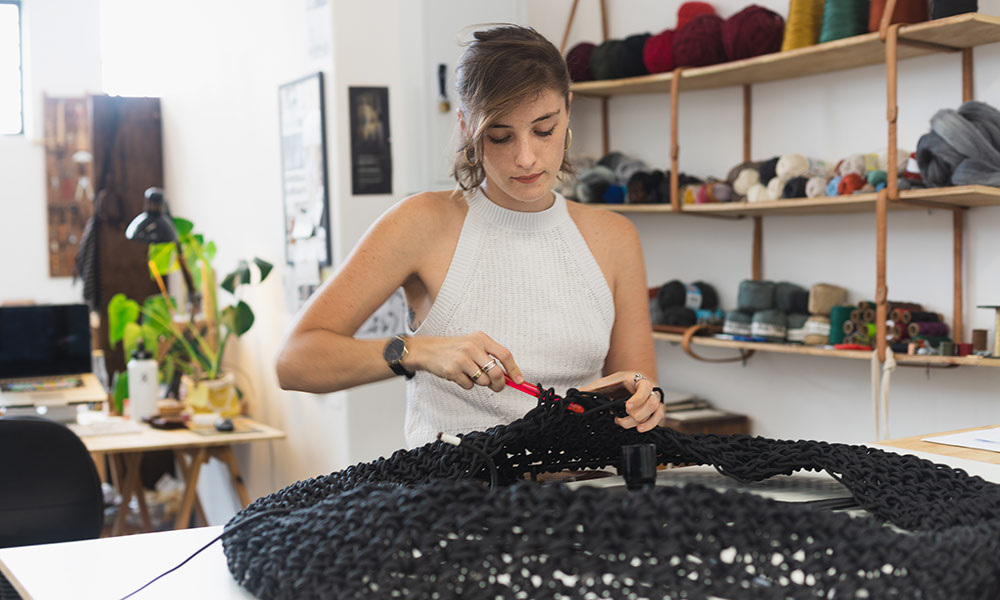 From the moment Ashlee Lloyd was introduced into this world, her environment has been a creative catalyst, laying the foundations that she has built her career upon. Her mother, a creative art director in the film industry, and father, a quirky mechanical engineer, brought Ashlee up in a slightly unconventional way.

Her childhood was less about Barbie dolls and more about absorbing the ongoings of her parents’ projects in the family garage – a pivotal location for learning in her life. Her dad would be spontaneously disassembling machinery with no intention of putting it back together and her mom would be immersed in the intricacies of her creative restoration projects.

“I was one of those kids playing in the garage with nuts and bolts making necklaces,” says Ashlee.

Through the processes of her parents’ respective passion projects, Ashlee started to pick up on the things she loved about textures, design and practical mechanics. She began adopting a beautiful combination of feminine creativity and masculine practicality, which are both evident in her work today. 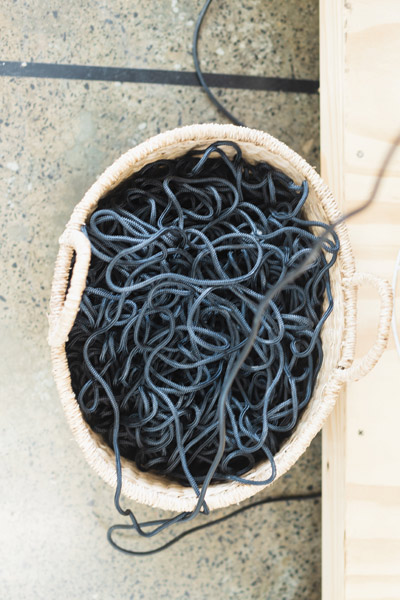 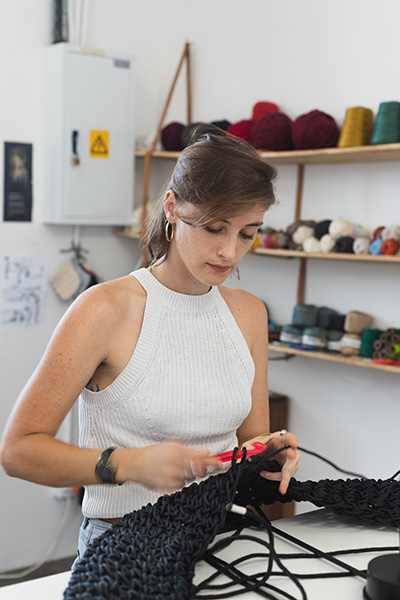 Going Against the Grain

From her early school days, Ashlee knew she wanted to follow her own direction and create using her own unique form of expression. She took design as a subject in high school and used the crochet skills she had learned from her mother to design various forms of furniture for her school projects. Her work, however, wasn’t always well-received.

“I wasn’t always the most liked student in school by my teachers. They would always tell me that my work wasn’t practical or that it wouldn’t work out or that it was going to get dirty, but I just did it anyways,” Ashlee says.

She continued to defy her teachers’ sense of practicality and created pieces that resonated with her own aesthetic. In lieu of receiving top-marks in her class, she was able to express her own creative direction that best suited her style and it eventually paid off. 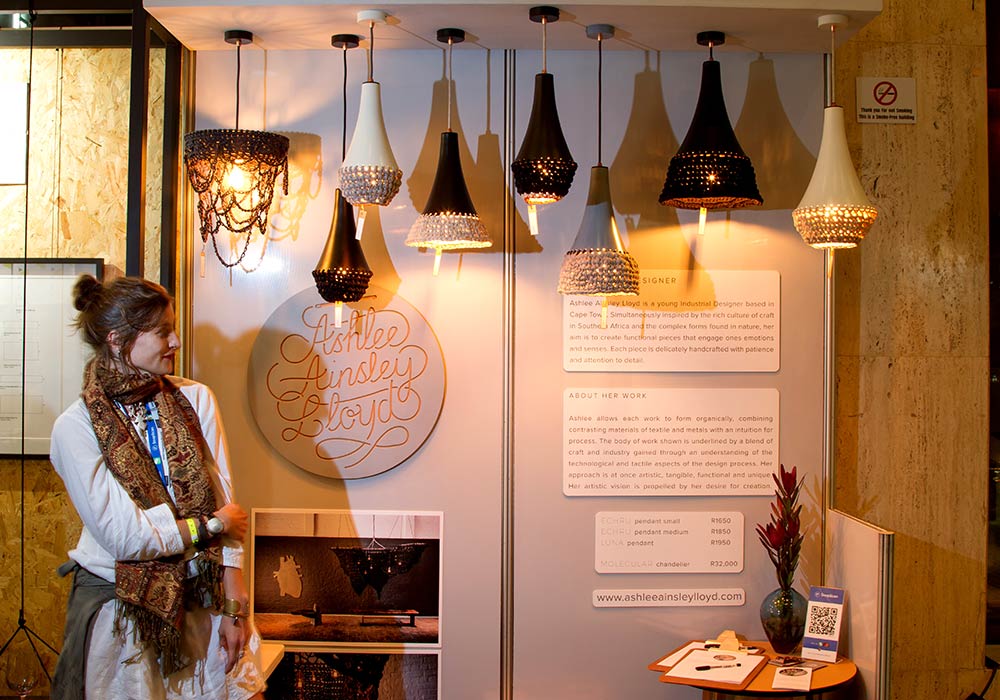 Ashlee went on to complete her Btech Honours in 3D Design at CPUT and focused on lighting in her third year. This, she told us, was due to her infatuation with light, electricity and how things are wired together.

Her final year presented similar challenges in producing work that wasn’t sufficiently tactile, creative, nor that she found synergy with. Disconnected from her thesis project, she decided to submit some of her personal work to the Southern Guild and their positive response sparked a turning point in her career.

“They loved my style and the work that I submitted but they wanted something completely different. That’s when I realised I wanted to go big and that’s where Molecular was born.” says Ashlee.

With the money she’d saved, Ashlee purchased the materials to create her Molecular chandelier and returned to her family garage where it all began.

For three months, Ashlee faced the trials and tribulations of taking on a new creative process. After multiple changes, one broken structure due to the unexpected material weight, and countless hours of crocheting, Molecular was ready to be revealed in A New Wave, a Southern Guild art exhibition. 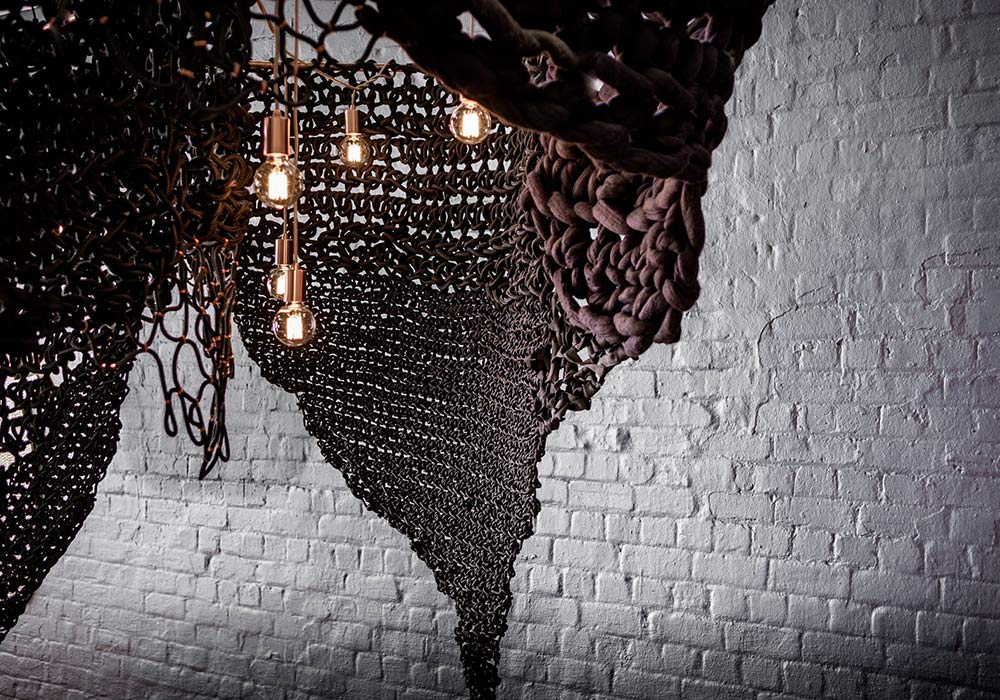 The entrancing piece spanned 2,8 metres in width and hung just over three metres in length, supported by a copper-plated mild steel frame that was designed and hand-crafted by Ashlee. The hand-wrought creation was crocheted with over a kilometre of various blackened materials and textures with both intricate and elaborate loops.

The piece, although seemingly dark and eerie, was designed to provide a sense of warmth and nostalgia for the viewer and to play with the light and refraction with the shadows on the walls.

“I wanted to create a tactile experience for the viewer as the pieces themselves always draw the viewer in to have an immersive experience by touching them,” says Ashlee. “It’s a really personal form of self-expression so not everyone is going to like it, and I’m okay with that.” 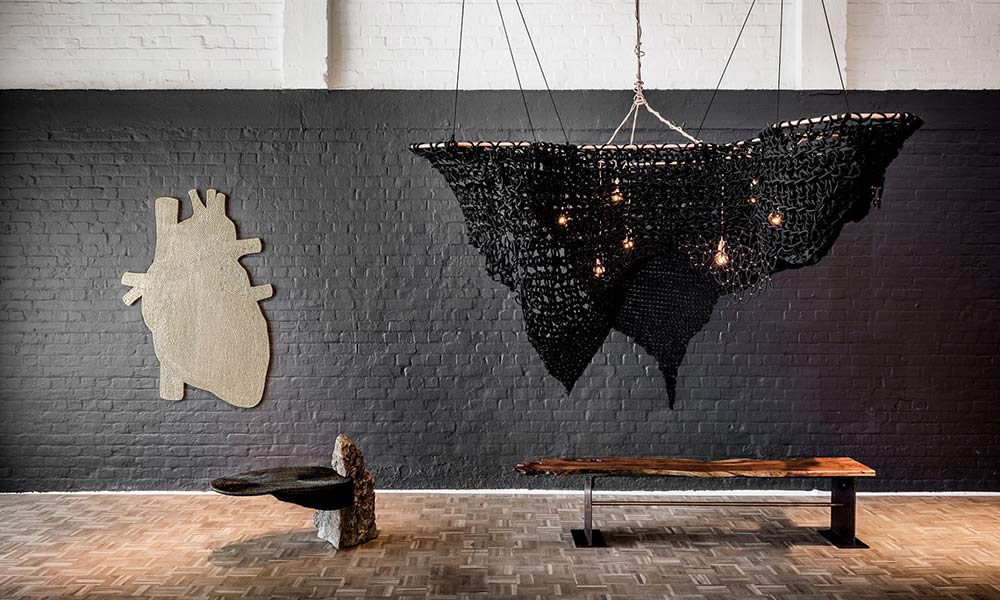 Expressing one’s creativity can be a way of healing and growth and crocheting has taught Ashlee more than just the art of weaving. It’s a process of reflection that’s been significant throughout all of her projects; it has that’s taught her to keep moving and that something greater is always waiting for her.

“There’s a lot of emotion that I’ve poured into my pieces. With Molecular, it was going through that phase of trying to find out who I was and most recently, working through my new pieces, I was dealing with the loss of somebody and not able to do anything about it,” says Ashlee. 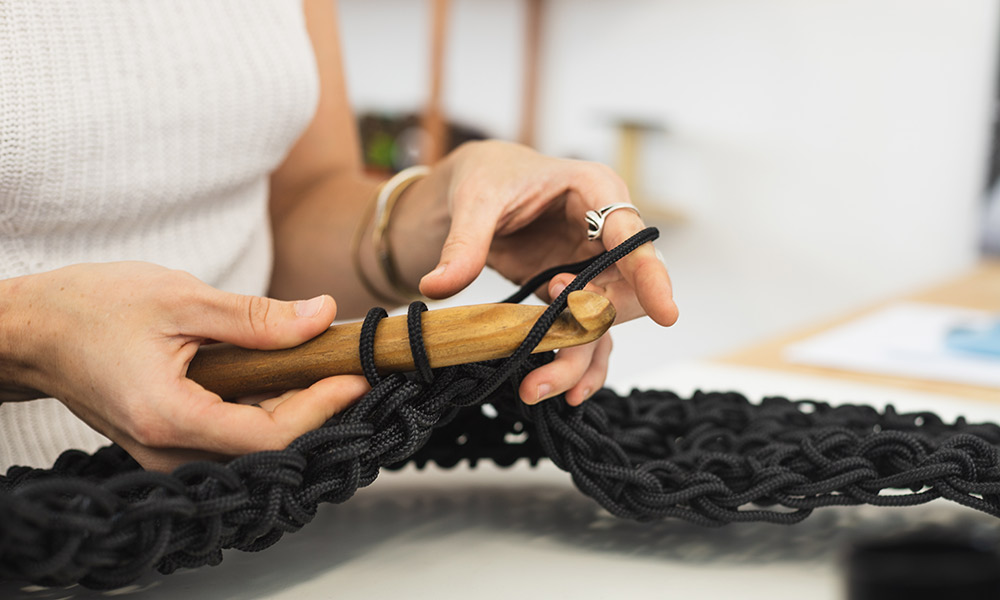 This healing, moving and reflection process has evolved the amelioration of Ashlee’s skill and talent, which is reflected in her work. Sometimes she gets lost in crocheting for up to 10 hours straight, captivated by the result of her work which motivates her to continue moving.

“The pieces really have a life of their own in some ways, there is no pattern or template that I follow and that’s what is so special about the process. I give into what the material is doing and almost work in its favour,” she says.

Ashlee’s latest chandelier can be found hanging above diners in The Skotness Restaurant at the Norval Foundation. The crocheting of this incredible piece took Ashlee a mere two weeks to create. Like most of her pieces, this uses an array of polypropylene multifilament rope of various thicknesses, flat tape and beads. 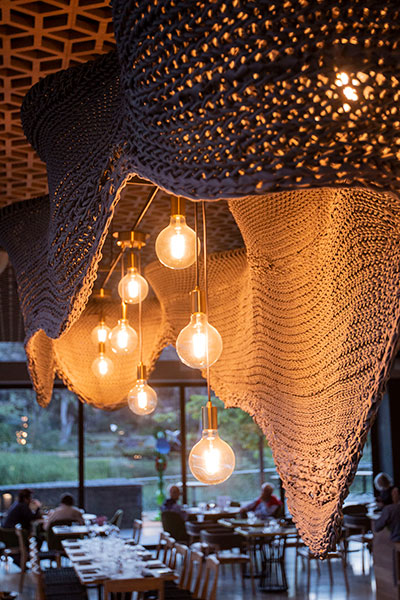 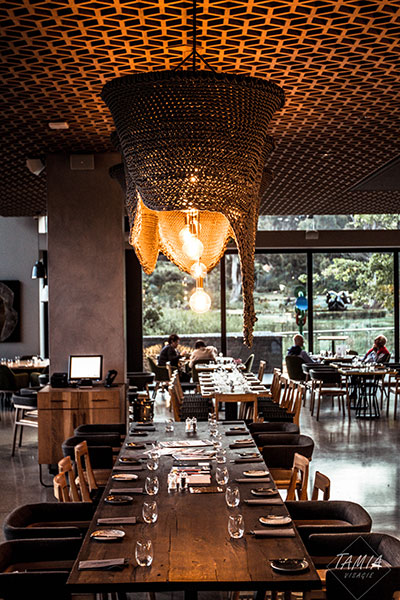 For the next while, Ashlee will be working on her new structured range of chandelier pod designs for restaurants, stores and game lodges, as well as a range of oval, circular and elongated pieces that reflect elegance and timelessness.

“I’m only 25 and everything is pretty exciting, but it’s not growing quick enough for me. My goal is to do 100 more large feature lighting installations in the next five years,” says Ashlee.

She’ll also be tapping into more accessible and budget-friendly designs for residential spaces. Whatever the direction, we can’t wait to see what the future holds for this incredible young woman.

Fav restaurant: Hesheng, Sea Point
Summer or winter: Winter
One food you could never live without: Fresh tuna
If you could teleport anywhere in the world just for a day, where would you go? My grandmother’s house in Holland
Something small that makes you really happy: My miniature golden retriever.
Even smaller? Staples in a stapler – they soothe my OCD.