The Crush Team Reveals Their Most Used Emojis

What did we ever do without emojis? How did we accurately express ourselves over text? Being a digital business, the Crush team live their lives on their phones – and it shows. We bare our deepest, darkest, emoji secret to show who we really are. 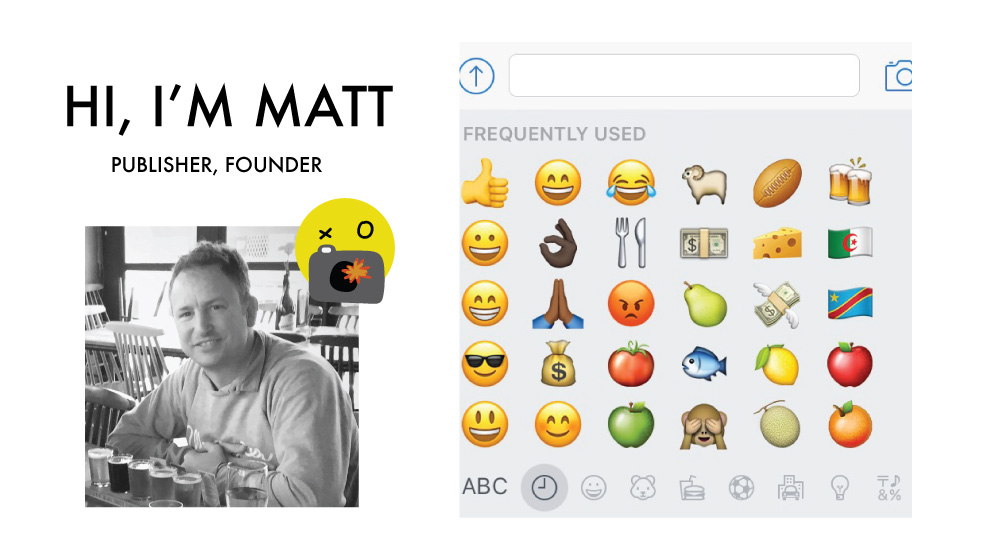 My most used emoji is the ‘thumbs up’, which probably means I try to be very positive. The thumbs is also surrounded by lots of smiley faces – which must signify my happy disposition. Moving on from there is a ram, a rugby ball and two beers. At first glance these would make you think I was a beer-spilling, rugby-mad macho-bull but look a row lower and you will see an ‘okay’ hand symbol and below that a humble ‘thank you’ sign. From the use of all the fruit and fish, I obviously also follow a very healthy diet. Very zen, I say! Mostly. On even further inspection between the already mentioned emojis there is scattering of various dollar signs signifying my secret dreams of being ridiculously rich and ruling the world. Lastly there is one super red, angry face that shows even the happiest of people can have an angry day. I can’t really explain the random flags, I have no idea where they are from– maybe I have dreams of travel or don’t always know where I am going… 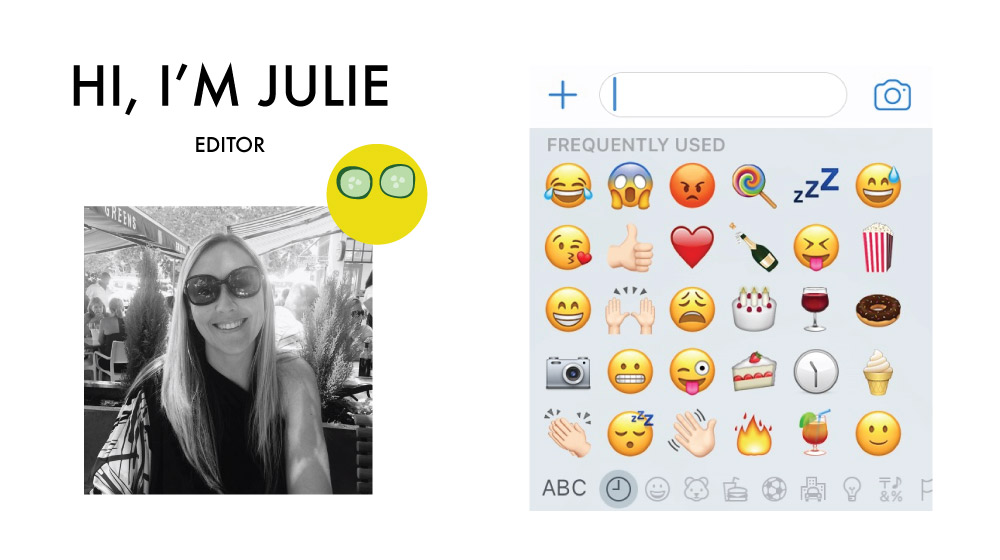 My first, and probably most used emoji, is the face crying tears of laughter – I use that one a lot. That’s pretty cool though, it means I’m laughing with friends and family all the time, and that can only be a good thing right? I think the reason it’s right upfront is that I was sending my younger sister photos of my dog sleeping in my bed like a human this morning – what a spoilt brat! I also clearly have a lot of food and drinks in my frequently used emojis – I would like to say that this is because a large part of my job is food editing, but it’s probably more likely that I’ve been sending pics of the food I want to eat to my sister-in-law. We’re both eating a very strict, healthy eating plan at the moment and there are days we want to just smash cake, doughnuts, ice cream, cocktails and wine into our gobs with abandon. The lack of any of those yummy things in our current diet probably explains the sad and angry faces. On the plus side, there are a lot of high fives and thumbs up and praise, which are all positive, so I’d say overall this represents me pretty well. 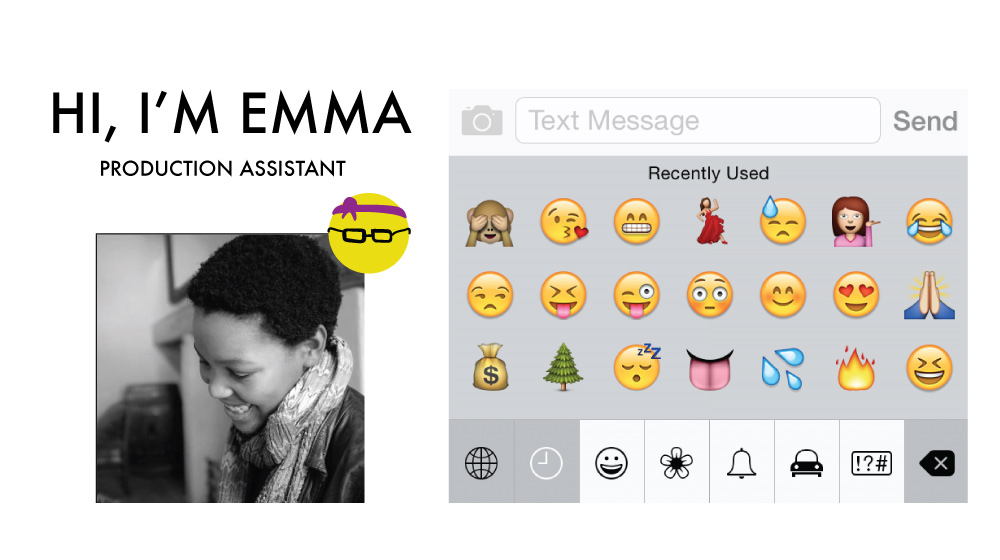 I have a lot less emojis to work with due to the fact that my iPhone is a classic model. But, what I can gather is that I spend a lot of time telling people embarrassing things based on the ‘see-no-evil-monkey’ and just the general blushing face. I also do spread the love a bit, judging from the kissy-face. Then there are the general cheeky faces and flame, which means I’m obviously quite chuffed with the funny (at least in my opinion) things I say. Lastly, I pride myself on being quite sassy (just like the sassy lady emoji), and do spend a bit of time bidding people adieu. 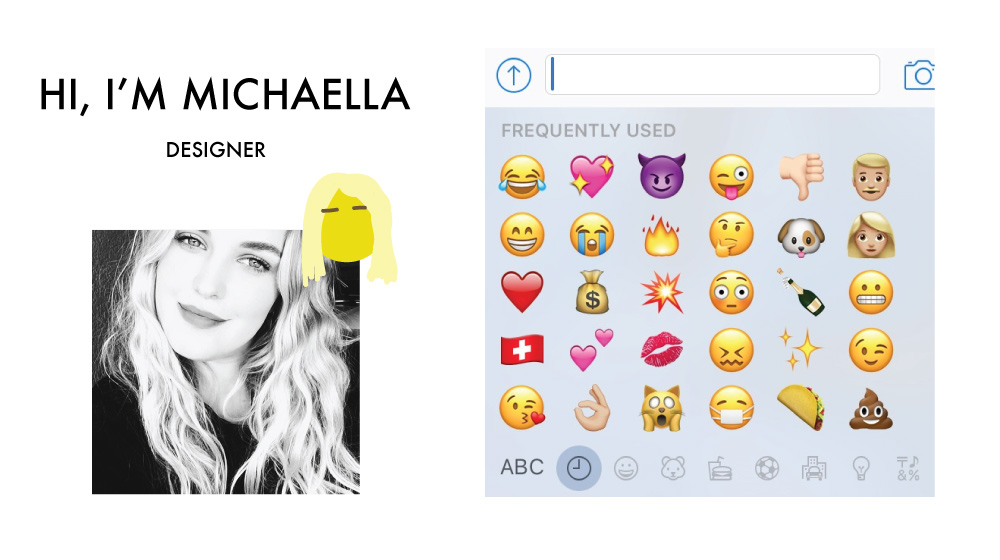 My most used emojis basically describe my life. Me – the blonde girl, my boyfriend Patrick – the blonde boy and Max our dog – who looks exactly like the dog emoji. There’s also bubbly in there, because who doesn’t drink bubbly all the time? As well as tacos – which seriously, we eat every week. I reckon some of my texts are a bit cheeky, hence the winky face. I’ve also been using the Swiss flag a lot because we are moving to Switzerland in 2017. And for some reason, I use the ‘money bags’ emoji a lot, probably because we won’t have many of those living in Switzerland! 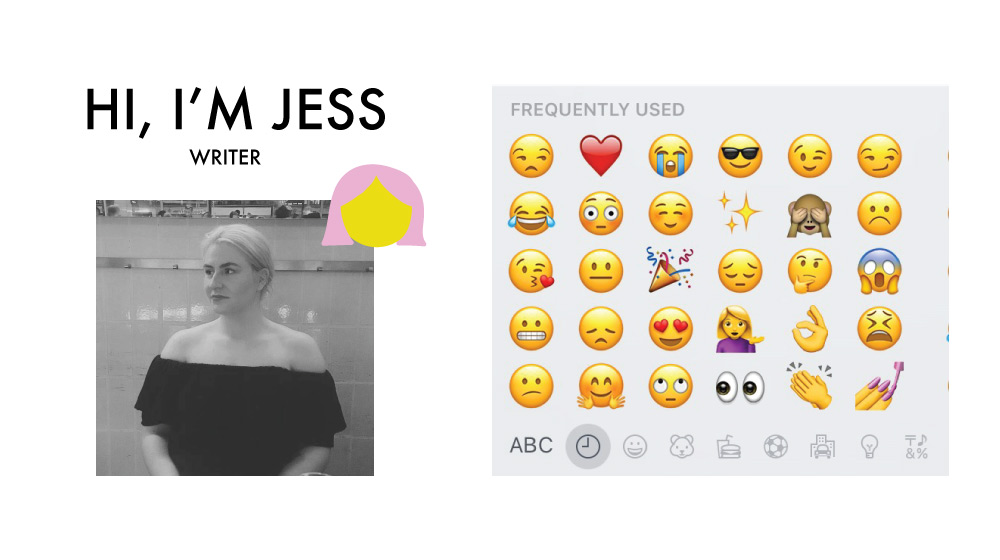 My emojis mostly seem to step in when words fail me. I use a lot of the facial expressions, probably because I can communicate entire sentences in emojis to my best friend. My most used emoji, hands down, is the side-eye emoji, I do tend to talk about things that annoy me over text, hence the shady eye. I do also spend a lot of time ‘laughing so hard I cry’ and celebrating something with confetti and horns, which is good thing. I clearly get very excited about things, so excited that I feel ‘jazz-hands’ are appropriate but I guess it’s great that I feel that positive about something! Other than that, the rest are pretty self-explanatory, especially the nails – I must be quite obsessed with my nails.
Share9
Tweet
Pin
WhatsApp
9 Shares
Share9
Tweet
Pin
WhatsApp
9 Shares
Cooking With La Motte
Festive Wine Jellies, Meringues and Homemade Custard
How Some of Our Favourite Chefs Celebrate The Festive Season