‘Keep calm and brew coffee’ could be Starbucks barista Teddy Nzama’s mantra. He’s the first (and only) barista from Africa to have won the prestigious Starbucks Barista Championship, which he did in London in 2019 against the national champions from 29 other European, Middle East and African (EMEA) countries. He kept calm throughout and brought the trophy home to South Africa. 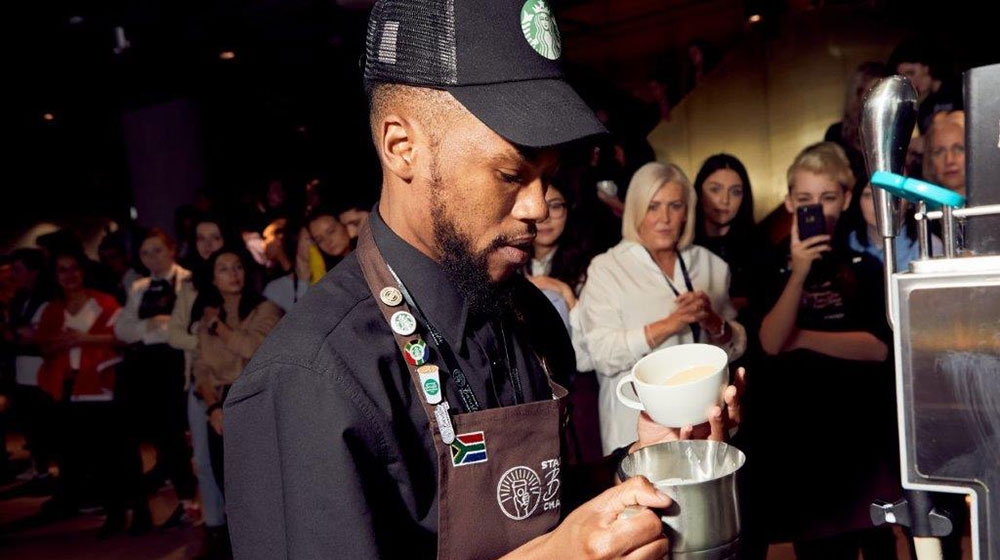 Teddy Nzama, who is a barista and qualified coffee master in Durban’s Florida Road Starbucks café, grew up in KwaMashu outside Durban and matriculated from the Isibonelo High School. There were no funds in the family for tertiary education, so, following a suggestion by his grandmother, he applied and joined the Ciro Coffee Academy in Mt Edgecombe on a learnership.

His understanding and enjoyment of all things coffee took root in his life and he committed himself to learning all he could. He then attended a barista competition as a spectator, where he met – and was extremely impressed by – Ishan Natalie, Category Lead with Starbucks South Africa, three-time South African Barista Champion and two-time All Africa Barista Champion.

“Ishan was competing in the championship – and he won. He inspired me immediately, and I realised I wanted to be like him. He’s my role model and my brother, and I am so pleased to have the opportunity to work with him.”

After a few years of working in a coffee shop and running a mobile coffee bar, Teddy Nzama joined Starbucks Florida Road as part of the opening team in 2017. The baristas were sent to Johannesburg for three weeks for Starbucks barista training and to understand how Starbucks works. When the Florida Road store opened, Teddy was ready to immerse himself in as much learning and practising as he could.

“Coffee has become my passion, the many different types of it, the styles of preparing it – each of which produces its own unique taste profile. I practised the art of great coffee-making endlessly and started entering the in-store competitions, which were followed by the regional and then national barista championships. In 2018, I came second in the national championships. I then set my heart on winning the national competition in 2019, which I did.”

What kept him motivated to keep going through to winning the Starbucks EMEA Barista Championships? Teddy’s answer is immediate. “The Starbucks team – my bosses and fellow partners, including Siya Nondwayi, my store manager, Ishan, and many other colleagues were and still are my mentors, coaches and teachers – and their encouragement and support have always been brilliant.” He adds that their confidence in him and his ability helped him to stay calm throughout all the competitions. “Keeping calm in a tough competition is the only way to win.” 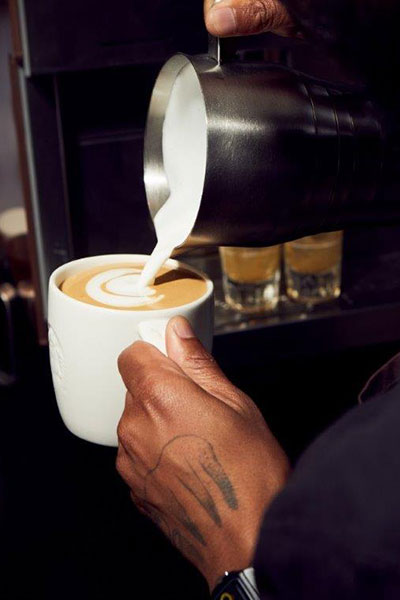 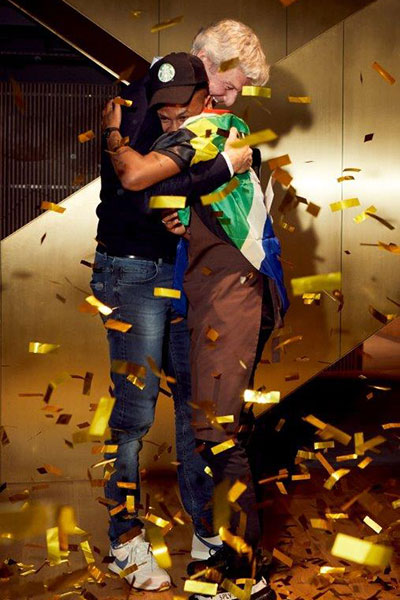 Teddy is both a people person and a coffee person – and he makes sure the two work well together. He loves the ongoing interaction with customers and sharing his passion for a good brew with them, and he loves helping and training other Starbucks partners and baristas to deliver the world-class quality brews that Starbucks is renowned for.

His advice to youngsters embarking on a career in the coffee industry is to grab every opportunity with both hands, to set goals and to work hard to achieve them. “Life is short,” he says, “make the most of the time you have and use the opportunities you are given.”

Looking ahead, Teddy says he hopes that one day Starbucks will have its own roastery in South Africa, and he will be able to expand his coffee horizons even further. He knows there’s still a lot to learn in the coffee world and he’s willing to learn it – and share his learnings. 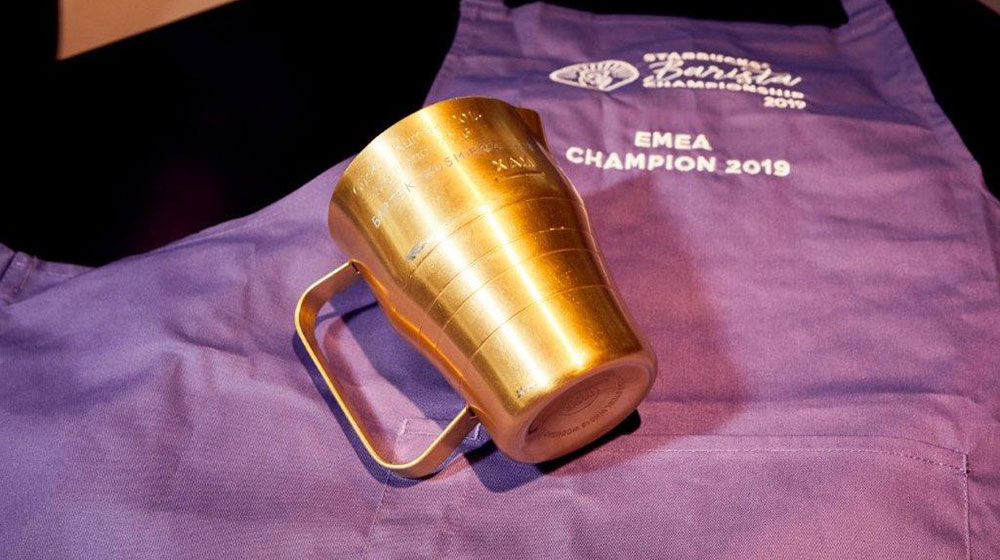 In his spare time, he enjoys brewing a cup of coffee just the way he likes it. “Coffee is my peaceful space,” he says. He also enjoys sport, listening to music, and chilling with friends.

Tell us a little bit about yourself beyond the coffee?

Beyond coffee, I enjoy sports, mostly cricket and soccer. I’m an active person who enjoys a lot of outdoor activities and travelling.

How did you get into the coffee industry as a career?

After Matric, I enrolled for a three-month course and successfully completed my studies and became a qualified Barista.

Where does your passion for coffee come from?

It was ignited after watching a Barista competition, but my passion grew more when I started learning more about the art of making coffee, and I wanted to know more.

When you were flying overseas for the competition did you have any inkling you might win?

Not at all. I just wanted to represent my country well and network with like-minded fellow “Baristas” from around the globe. 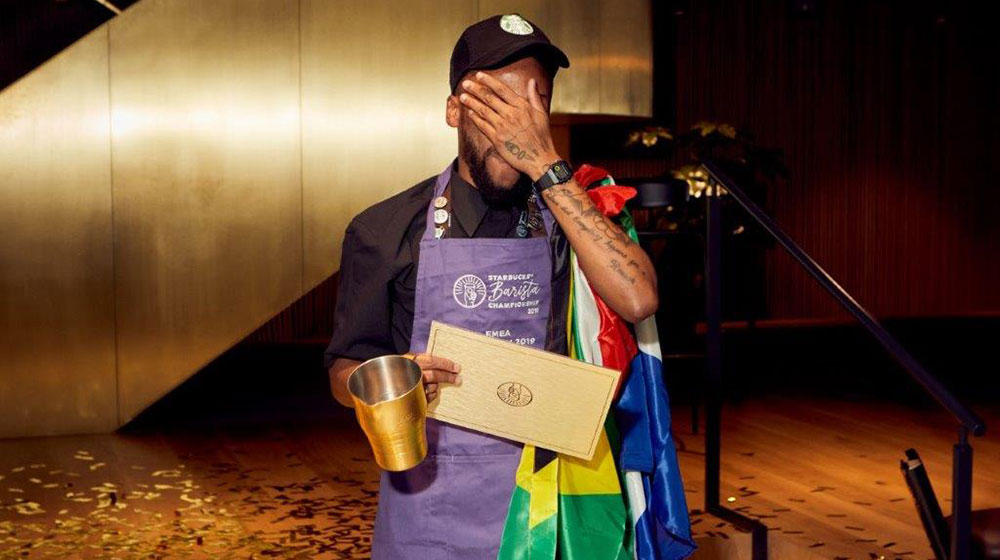 How did the Joburg Starbucks training prepare you for working at the establishment?

The Starbucks training is amazing! It’s through the training that I learnt about customer service, working under pressure, I gained product knowledge and how to use different brewing methods to make the perfect coffee cup. The training is well structured and also gave me insights into the brand and its products.

Have there been any memorable or weird coffee orders that you have encountered?

A customer once ordered a Venti sized Mocha, with 5 shots, not 3, made with soya milk and hazelnut syrup topped with extra whipped cream and Caramel Drizzle.

What has been the highlight of your journey in this industry?

I’ve had the privilege of travelling abroad for the first time and having won the title as the first participant in South Africa/Africa to win the Starbucks championship has been the highlight of my career. Another thing would be arriving in London and meeting other partners, who not only knew about my craft but were also inspired by my work, which for me, was an overwhelming feeling.

Share
Tweet
Pin
WhatsApp
0 Shares
Join Us As We Talk To Plant-Based Advocate, Mira Weiner
How To Get The Most Out Of Your Food Scraps