Nando’s a Restaurant where #EveryoneIsWelcome

Nando’s, as well known as they are for their great flame-grilled Peri Peri chicken, they are as equally well known for their snappy, sharp marketing. They’ve never been a brand to hide behind political correctness and that’s what makes them so respected. With the hotly contended US presidential election, and subsequent inauguration on January 20th, it was almost a sure thing that Nando’s wasn’t going to keep quiet.

Leading to the Inauguration of US President Donald Trump, Nando’s Peri-Peri launched a campaign at all of its Washington, DC restaurants that declared that “#Everyone Is Welcome.” Hatched after one of the most divisive elections in US history, the campaign expresses Nando’s belief in the values of inclusion, diversity and mutual respect.

Ahead of the inauguration, on Nando’s social media sites and the windows of Nando’s six DC locations, the South African-Portuguese restaurant, known worldwide for its spicy flame-grilled chicken, stated:

Nando’s also is distributing 60,000 free posters to Washingtonians that state “#Everyone Is Welcome” with an oversized heart. The front of the poster is not branded, to encourage widespread display. On the back, the posters include the Nando’s statement and add: “Even if you’ve never sat at one of our tables, you’re welcome to stand with us.” The posters were included in copies of the free Express newspaper, available throughout Washington, DC. Nando’s also handed out the posters at its DC restaurants and encouraged shop owners, restaurants and DC residents to download printable versions of the poster at everyoneiswelcome.us, for display in public places. 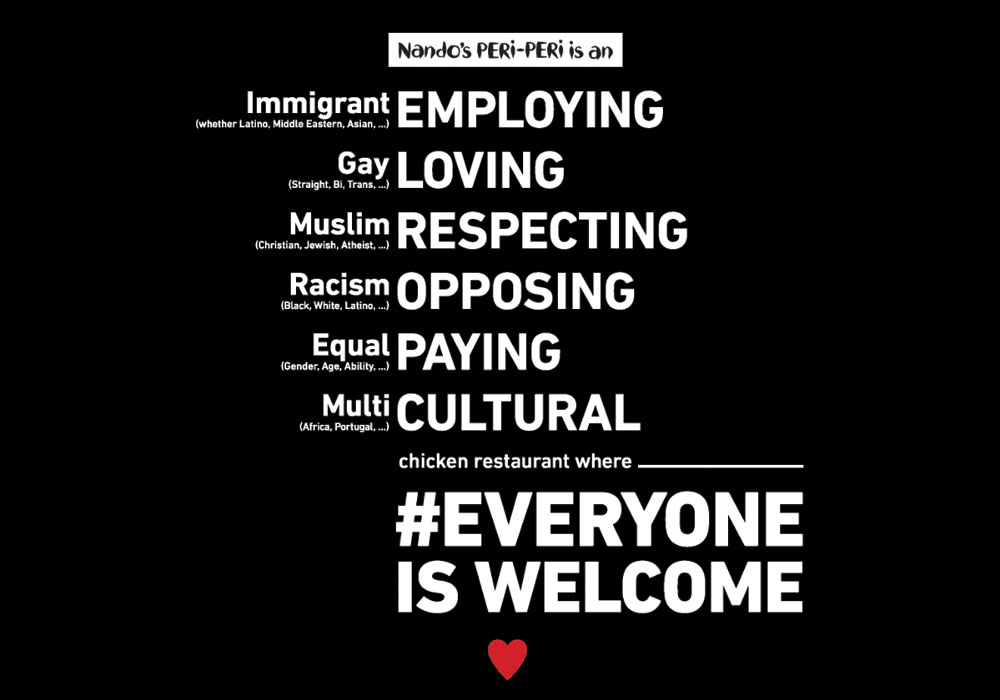 “During the Inauguration, we want to make it clear that Everyone Is Welcome at Nando’s and in DC. As the saying goes, even if you’ve never sat at one of our tables, you’re welcome to stand with us,” said Burton Heiss, CEO of Nando’s Peri-Peri. “This is a statement of who we are, and the values that our company and employees hold dear. It is meant to be as inclusive as possible. We hope that the campaign will catch on and start a conversation about understanding and respect.”

On Inauguration weekend, Nando’s also made a donation to its longstanding partner, the DC Central Kitchen, which is helping to break the cycle of hunger in Washington. Added to that, Nando’s donated 50 percent of all net proceeds generated at its six DC locations on January 20 and 21.

As a brand birthed in a country that has faced its own struggles with tolerance towards diversity and inclusion we would expect nothing less. We’re proud of this local brand standing up for the rights of all.