Graham Beck is overjoyed to reveal that the Cuvée Clive has once again been selected as Sparkling Wine of the Year in the annual Tim Atkin South African Report.

The 2014 Cuvée Clive was awarded a stellar 97 points out of 100, earning it the highest ranking in the sparkling wine line-up as well as a Gold Medal in this esteemed wine competition. However, this is by no means the first time that the Cuvée Clive has been chosen by Tim Atkin as his favourite South African Cap Classique. Last year also saw the 2014 being selected as Sparkling Wine of the Year, while this sought-after honour also went to the 2009 in 2015 and 2011 vintage in 2017. 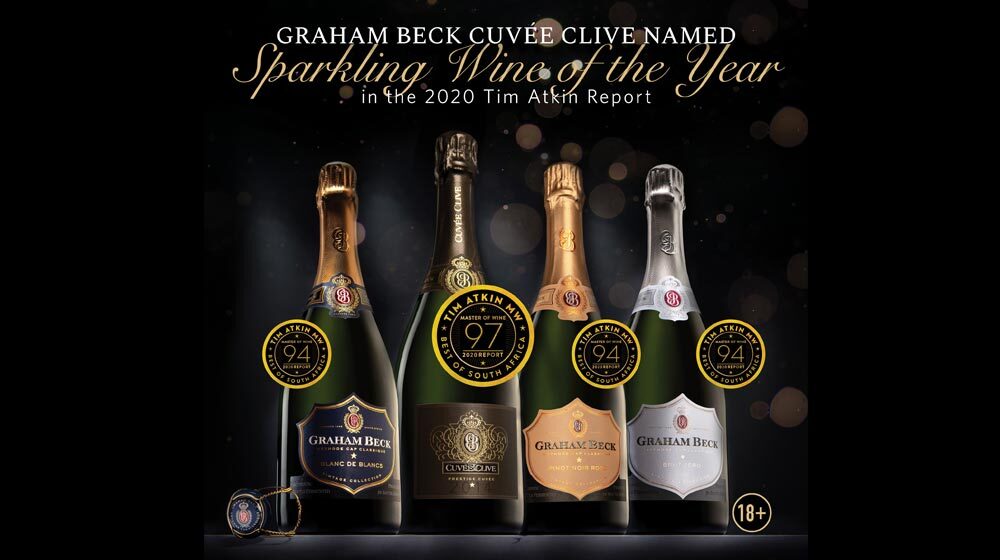 To further emphasise the golden thread of excellence which runs through the entire brand, the 2020 Tim Atkin Report also awarded 94 points to the Brut Zero 2014, Pinot Noir Rosé 2015 and Blanc de Blancs 2015. Both the Brut NV and Brut Rosé NV received 90 points.

“This affirms unequivocally how consistent Graham Beck Cap Classique is in terms of quality and consistency. The Cuvée Clive represents the very peak of our pursuit of the perfect bubble – this flagship Cuvée encompasses everything we stand for as a specialist sparkling wine producer”

This year Graham Beck celebrates the anniversary of its 30th harvest – a reflection on a remarkable 30-year journey which has given us the passion, perseverance and pure joy to see us through the most recent uncertain times. Cap Classique is such a fabulously unique South African icon and, as a specialist sparkling wine producer, we’re thrilled to be flying this flag high.

“Against formidable odds, South Africa is making some of the greatest wines in its history. I hope more people discover the outstanding quality of South African wines. More than ever, we need to tell the world,” comments Tim.

We could not agree more!