Abundance and generosity; two words that over its long tenure have become quite close to the heart of Boschendal wine farm. And yet, those two words have never been more fitting than they are now. Since the opening of the Werf Food Garden, Boschendal’s vegetable allotment now features nearly five acres of plant perfection. It really is as close to perfect, with minimal intervention from human hands and no non-organic chemical usage, the vegetables have been allowed to flourish as nature intended. This incredible garden provides a variety of produce, with quality that’s simply better than money can buy. However, the Werf Garden provides much more than food, it’s also making a serious case for environmental awareness.

The reason for the establishment of the garden was a simple one – catering. The wine estate is home to two restaurants, a deli and two picnic spots and a huge number of produce is needed. Thanks to new investors, and their environmentally friendly outlook on business, the garden was born and there has been no stopping it since. Megan McCarthy is the Food Garden Manager and is the green-thumbed brains behind the operation. She explains that the garden follows an ethos of ecomimicry and the school of thought that everything should be 100% sustainable. The estate is also home to Angus beef, which roam the vast farm, and chickens that run amongst the grazing cows. The attention to detail needed to maintain a self-sufficient, organic environment is clear, so much so that even those chickens will soon be part of a biological farming system, and will help loosen, fertilise and de-bug the land. Megan is working to correct the soil health and renew its life-giving qualities that were destroyed by years of aggressive, chemical-laden agriculture practices, which was the norm up until recently. She is dedicating herself to perfecting the microbial balance of the soil and how its probiotics are protected from the elements, therein allowing for a more fertile and luscious soil, which means better yields of fruit and vegetables. 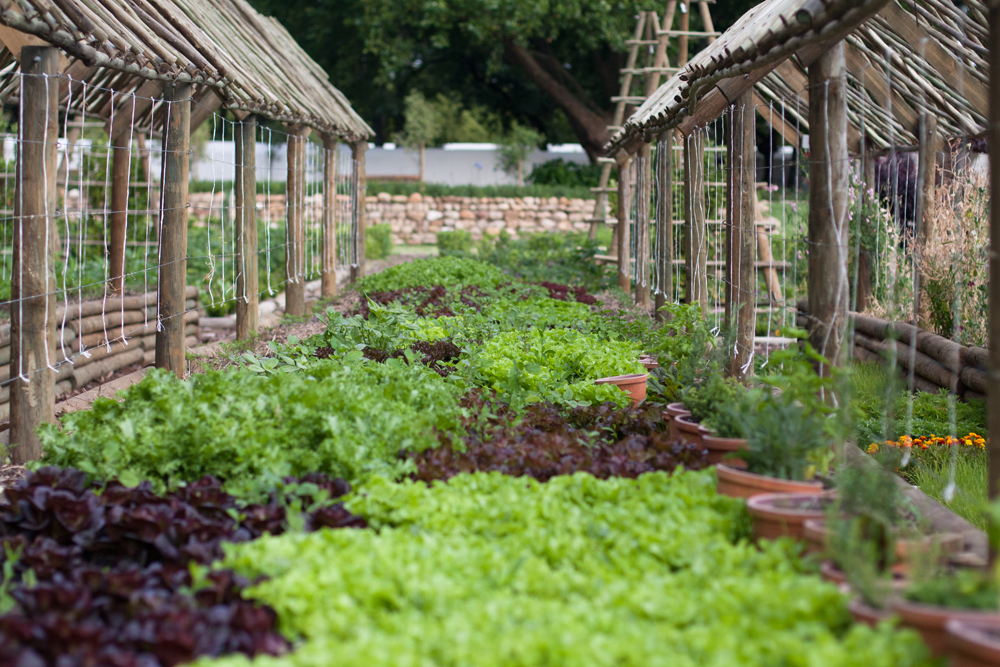 The generous bounty of the Werf Garden at Boschendal 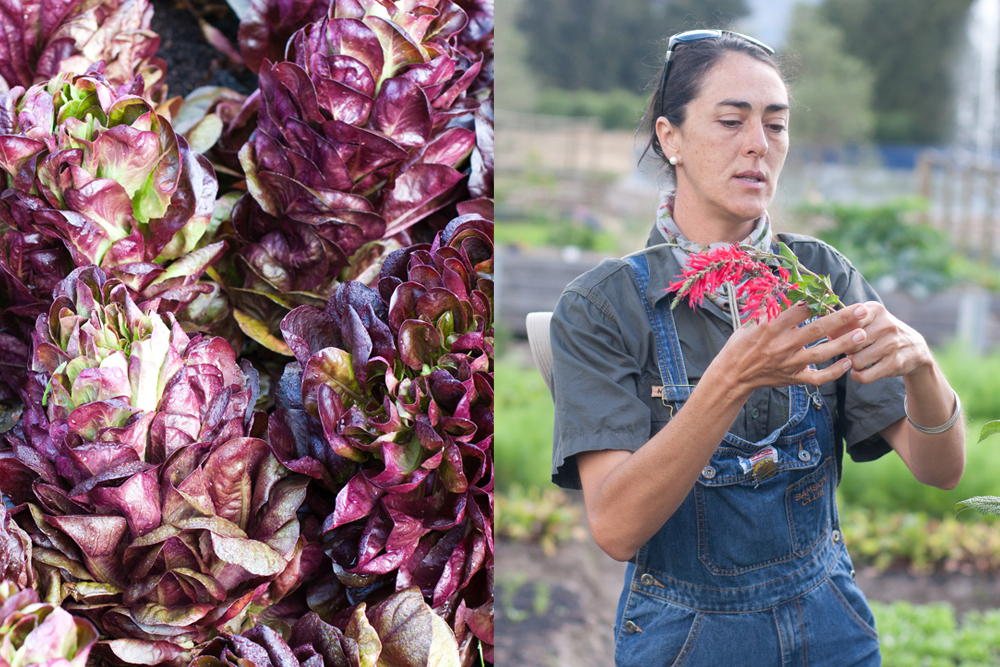 Megan Mccarthy, the Werf Garden manager, has created one of the most beautiful edible gardens at Boschendal. 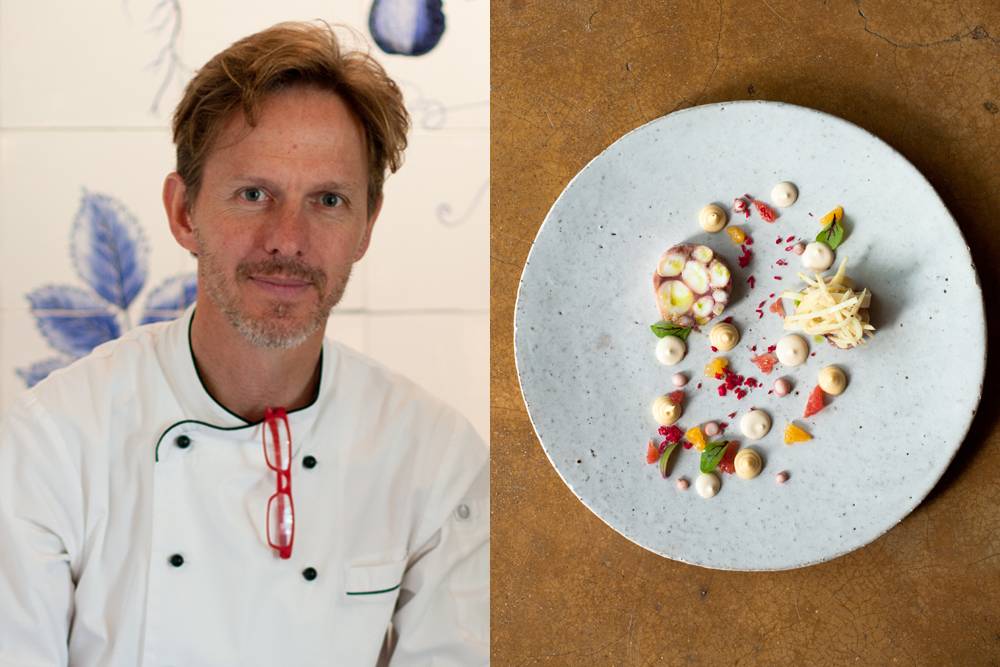 Executive Chef Christiaan Campbell adapts his menu at The Werf restaurant according to what the garden yields.

Fruits and vegetables are of special interest to Executive Chef Christiaan Campbell and his kitchen at The Werf Restaurant, where they offer daily lunches and dinners over weekends. In terms of the food, Campbell describes it as being guided by the garden, and because of that simple mentality, the menu is constantly changing. Megan and Christiaan work together to see what the garden will have on offer and from there, a menu is planned. It’s a very organic and natural way to cook, and the inspiration is visible from the second you set foot in the restaurant. The garden certainly requires some level of patience though; as right now, the team is waiting for certain vegetables, such as horseradish, to come through, so in the interim they either make a plan to source it or hold on to that dish until the garden provides it. It’s a far cry from the stock-standard luxury of planning a dish and expecting the supplier to provide whatever the chef needs. However, much to the chef’s chagrin not every single vegetable is available from the garden, potatoes and onions are the staples of any kitchen but they come with their own set of challenges when planted in a delicate eco-system such as the Food Garden’s. Potatoes particularly have a high risk of soil disease, which would naturally undo months of restorative work on the landscape. Although, he says that they’re working on solving the problem and will eventually get there with their spuds.

Other than that, the relationship between kitchen and environment is perfectly in balance. The happy chickens provide farm fresh eggs, the free-range Angus beef features heavily on the menu, and in the same way each and every vegetable is used from the garden, so is each cut of meat – the chefs are encouraged to use every part of the animal in innovative and delicious ways. The general ethos lends itself to a greener way of living; it educates the team about the fruit and vegetables they’re using, and engenders respect for all animal products used. The best part of this process, however, is the plate of food that comes out at the end – it’s simple, pared-back and allows the produce to shine.

Visiting guests can also take a little piece of this farm freshness home with them – garden produce can be purchased from the Farm Shop & Deli onsite, as can pasture raised beef and eggs.

The importance of the garden goes even further than the kitchen and the restaurant. The impact on the surrounding areas is immeasurable; Megan, with her wealth of knowledge, has taught every single garden worker, most who have come from underdeveloped communities nearby, to do every single task required to keep the garden and farm running. From planting to pruning, to picking and packing, to feeding chickens, each worker can complete any job. This is a crucial step in improving their quality of life as well – not only can they now grow food for themselves, but have also learned a trade that they can take elsewhere and look for work. It’s inspiring to see a farm buzzing with activity, full of people who truly care about what they are doing. 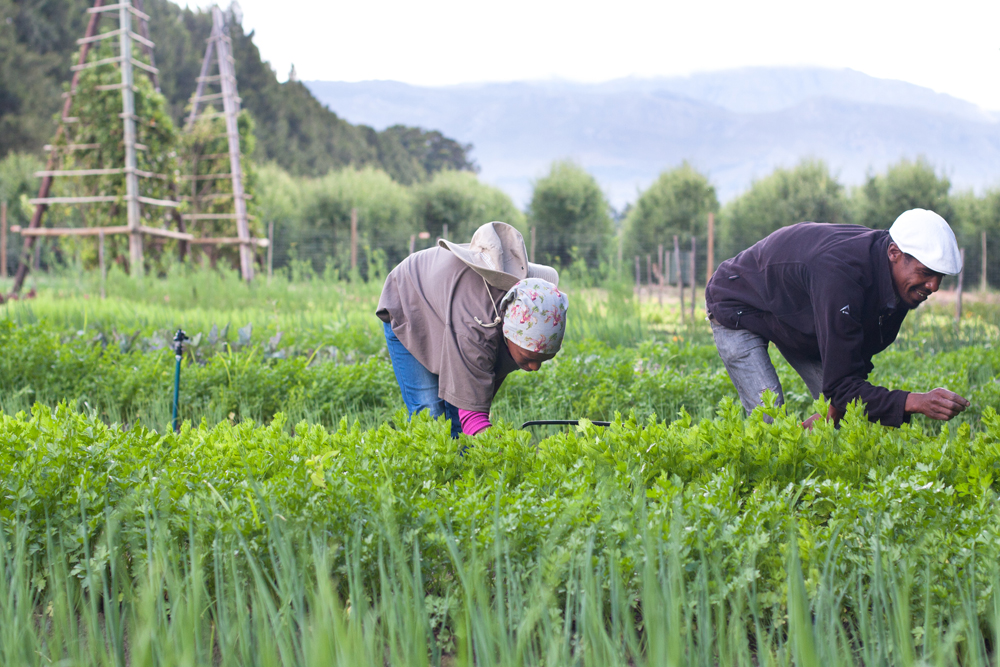 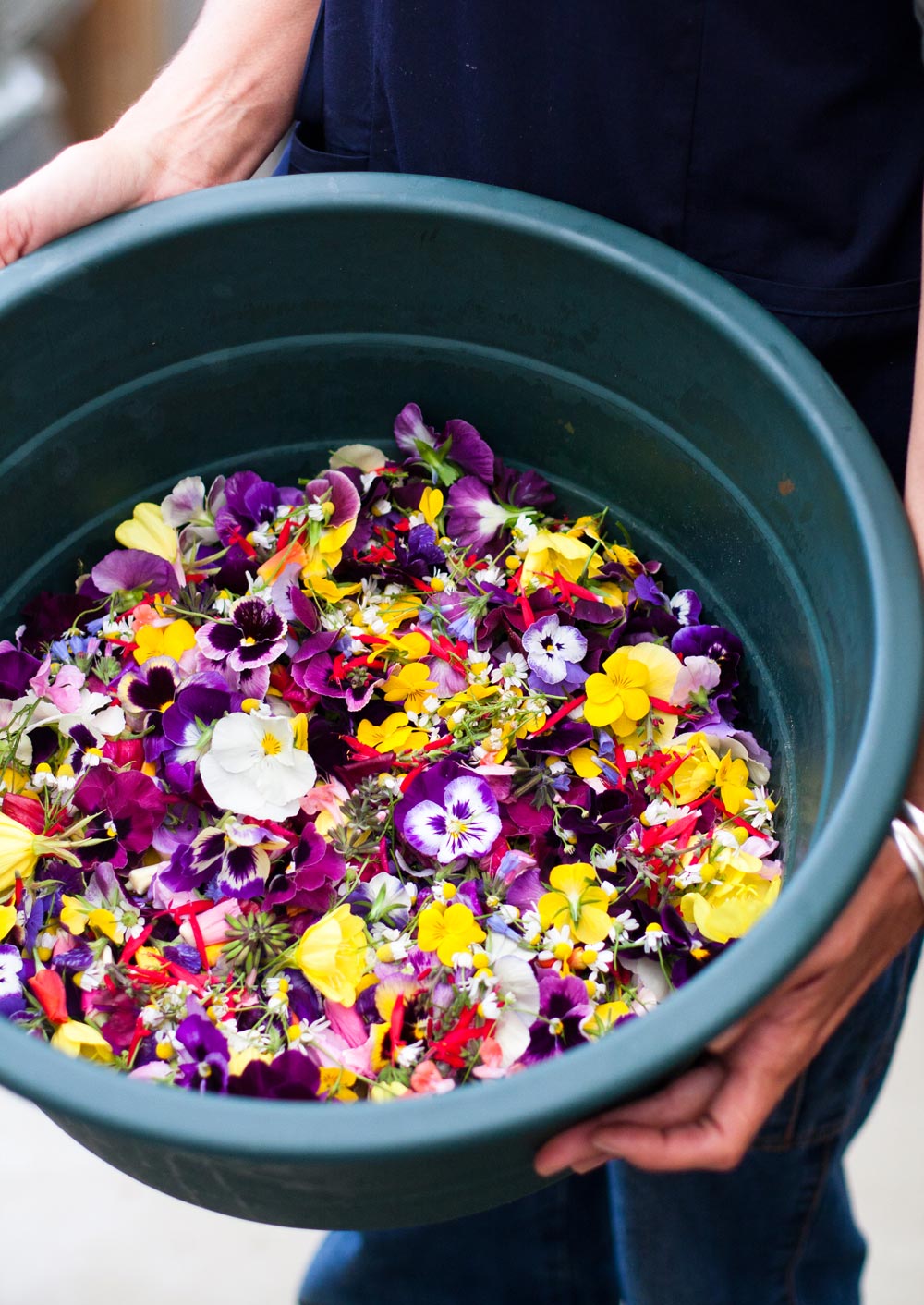 The garden really is the root of regeneration for Boschendal. Through these simple fruit and vegetables, the wine estate is making a change to soil health, water cleanliness, clearing of alien vegetation, community upliftment and all round reducing their carbon footprint. What makes it more impressive is that they’re doing all of this while providing supplies for a restaurant that serves up wholesome and tasty food, in the most beautiful setting. Boschendal, one of the pillars of South Africa’s great wine industry can now take pride in their commitment to tread lightly on our earth. 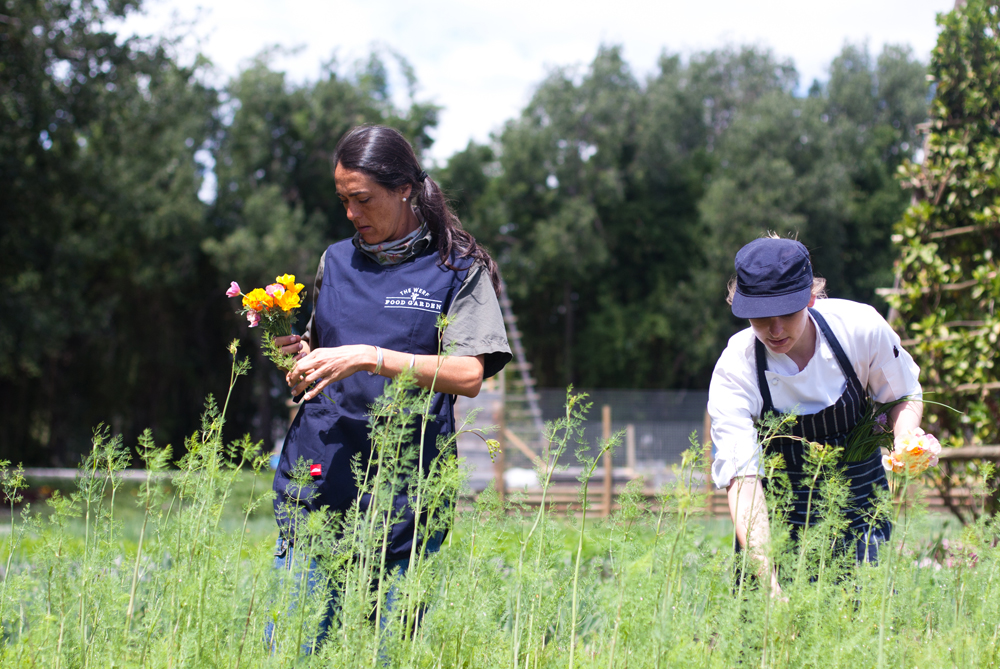 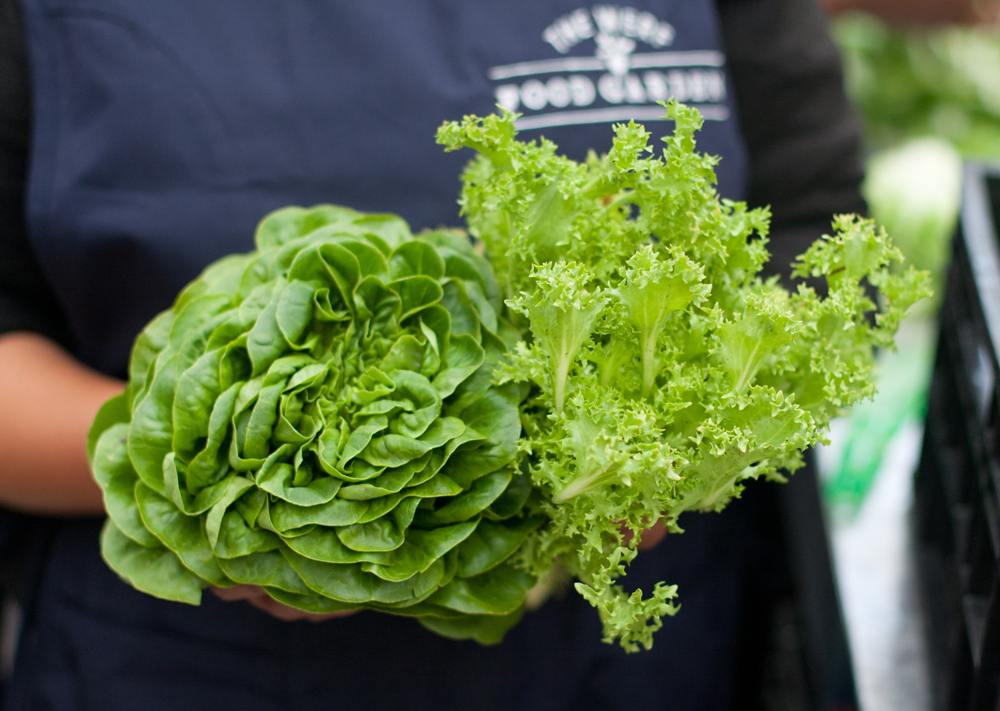