We get Cooking with the Absa Top 5 Olive Oils

We’re producing incredible, award-winning olive oils here in South Africa that deserve to be showcased and celebrated. A collaboration between Absa and SA Olive – the ‘Top 5’ competition, was created in 2013 to do just that.

Learn a little bit more about the esteemed Absa Top 5 winners for 2016 and create one of these beautiful recipes, created using each of the winning oils… 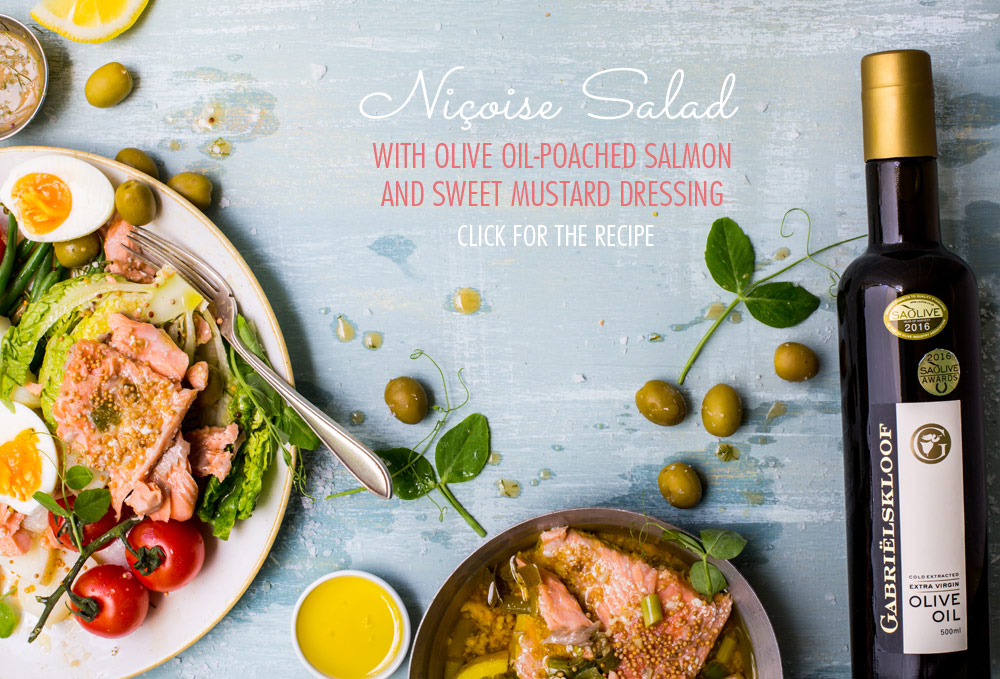 Gabriëlskloof Wine Estate is located in the picturesque Bot Rivier valley. The farm’s first olives were planted in 2003 and the first oils made in 2010. 2016 has been a low yielding year with high-quality oils. The process of oil production at Gabriëlskloof is a real team effort, headed up by Barry Anderson, along with Adriaan Davids and Ferdi Coetzee.

Use when… cooking a roast lamb or drizzled over salads. Try this recipe for Niçoise Salad with Olive Oil-Poached Salmon and Sweet Mustard Dressing.

Where to buy:
From the farm, or nationally through Checkers. 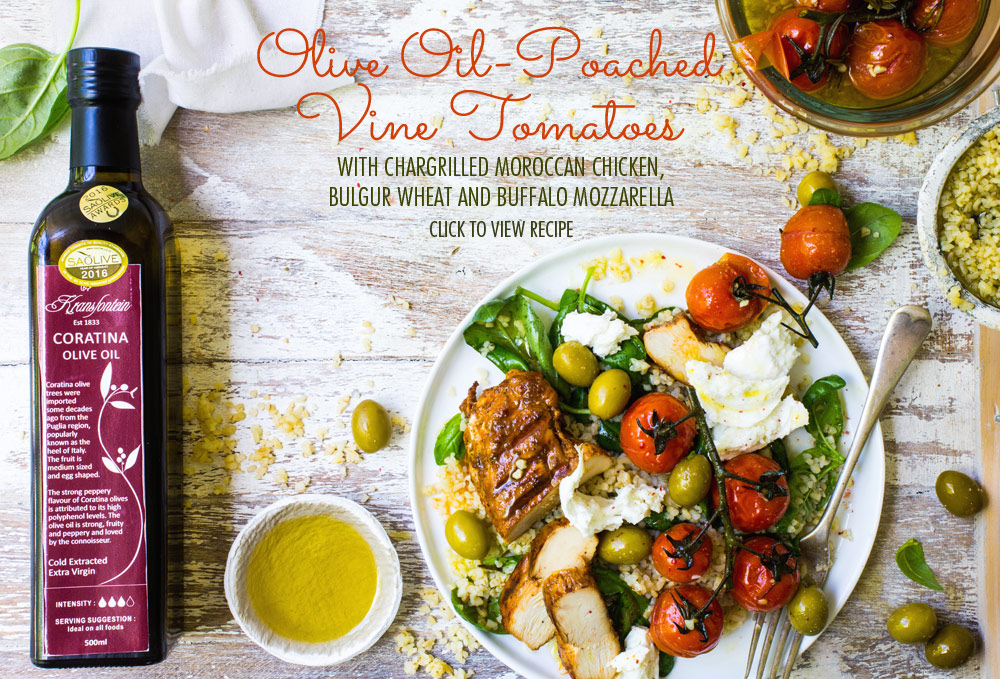 Kransfontein Estate is located 10 km from the coastal town of Stilbaai along the Goukou River. In the early days, the estate was actually three separate farms, namely Birdsong, Muffets and Milkwood. The farms were collected over many years by the internationally famous novelist, Wilbur Smith, and were the location that he penned his early novels. In 2000, the farms were purchased by adv Altus Joubert SC and further enlarged by adding the farm Drie Heuwels.

The farm’s olive trees are planted on terraced, calcium rich, north facing slopes. The cultivars include Coratina olives, originating from the Puglia region, also known as the heel of Italy. There are also Mission olives, originally from Spain, and Frantoios olives from Tuscany. Great care is taken to ensure the health of the soil, trees and fruit.  Olives are cold pressed on the same day of harvesting which sometimes runs into early hours of the morning.

Dail Steyn is the oil maker and manager at Kransfontein Estate and has been a part of the for the past 9 years. Dail works with a team harvesters, and his press assistants, Ronnie and Hennie, to produce Kransfonteins award-winning oil.

Tasting notes: Strong peppery flavour attributed to its high polyphenol levels. This year’s tasting results – fruit of green and ripe olives and olive leaves, with the taste of almonds and walnuts. 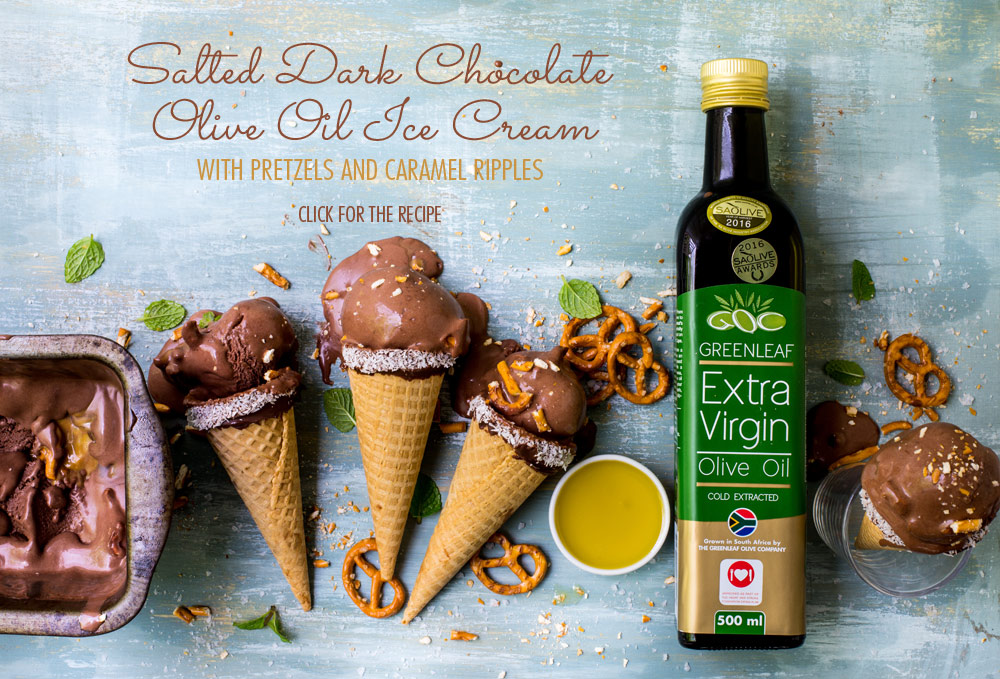 Greenleaf’s family-owned-and-run olive estate is situated near the beautiful village of Malgas, along the tranquil banks of the Breede River. Over 300 hectares, comprising of nine different cultivars, is currently planted and further plantings are underway. Great emphasis is placed on innovative technology, alternative farming and processing methods, as well as eco-efficiency.

Use with… a multitude of different dishes from sweet to savoury. Try this gorgeous Salted Dark Chocolate, Pretzel and Caramel-Rippled Olive Oil Ice Cream. 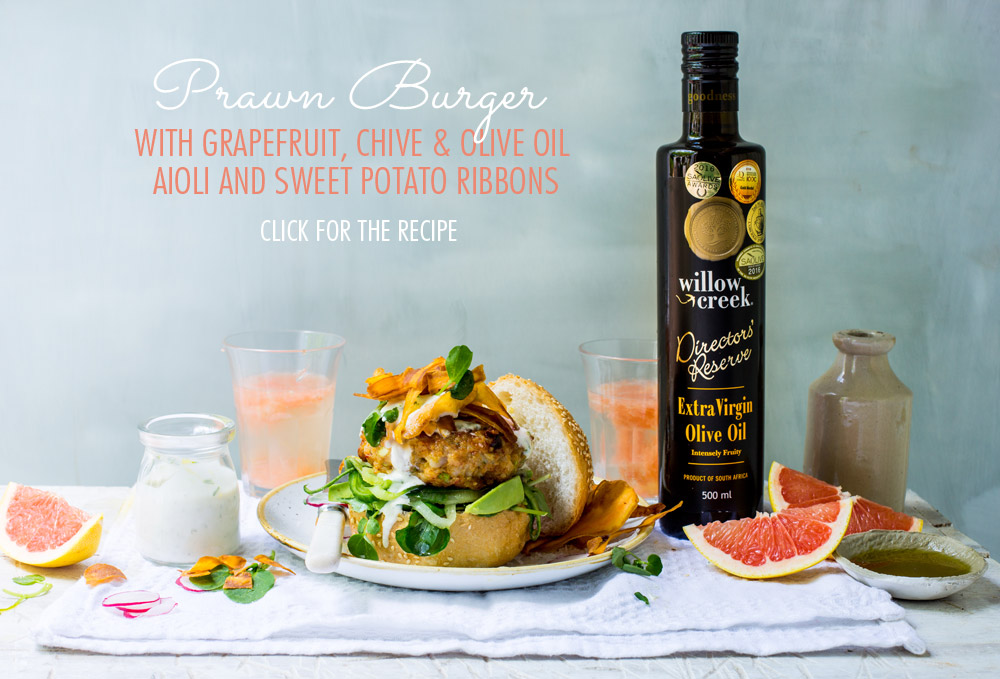 In 1999 when Andries Rabie realised that the terroir of the Nuy Valley was perfectly suited for the cultivation of olives, planting of 265Ha at Willow Creek commenced. The lime rich soils, Mediterranean climate, access to irrigation water and the correct tending of the groves delivers flavourful fruit for the production of the estate’s olive oil.  The latest technology is utilised to extract extra virgin olive oil of the best quality possible. Their state of the art Pieralisi Leopard 8 decanter has a capacity of 6,5 tonnes/hour – making Willow Creek the largest South African plant equipped with this leading technology. An Oxbo harvester is utilised to ensure that the olives are harvested at their optimum ripeness stage.  At 6 tonnes an hour it supplies the capacity of the Pieralisi decanter like a hand in a glove affording a minimum time span of less than an hour from harvesting to extraction. Commitment to continuous improvement is a main ingredient in Willow Creek’s recipe.

Francois Cilliers has been making olive oil with Andries Rabie at Willow Creek since their first harvest in 2002. The past three seasons he has further gained from the experience of Ugo Ametta – a family friend of the Rabies who is a 5th generation olive oil producer in Torremagiore, Apulia, Italy. After the oil has been extracted, Louise Rabie tastes her way through the various cultivars and tanks in order to select the premium and blend an extra virgin olive oil with the desired flavour profile, complexity and harmony to present Willow Creek’s flagship Directors’ Reserve.

Tasting notes:
Verdant aromas of artichokes, green olives and tomato vines are accentuated by notes of wild rocket, salad herbs and walnuts. The flavours follow through on the palate with a satisfying bitterness and tingling pungency to present a harmonious, full rounded flavour profile. 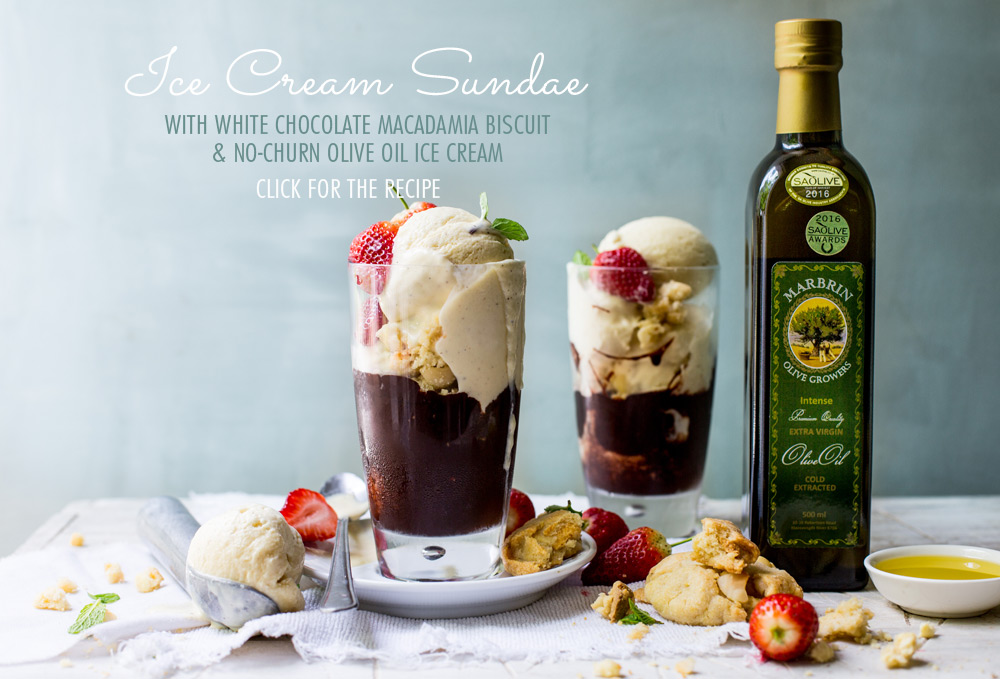 Owner, Peter Coetsee planted the first trees at Marbrin back in 1997. He pressed his first oil in 2011, which is also when he won his first Gold Medal. His daughter, Briony and partner, Clive Heymans, returned from living abroad for many years to take over the farm in 2012 and they have won a minimum of one Gold Medal for every vintage produced since. This is the third time in the four years of the Absa Top Five Awards that Mabrin’s oils have been shortlisted as the best in the country.

Clive Heymans, Peter’s son-in-law is farmer and producer of all Marbrin’s products. He found the harvest for 2016 much more abundant in all factors – quantity harvested, fruitiness produced and spiciness at the finish.

Tasting notes:
This oil is robust and intense in fruitiness with flavours of green tomatoes, avocado, green apples and hints of walnuts all balanced with a strong peppery finish.

Works well as… a table oil – poured over pasta, salads and for dipping with fresh breads. Even use it in a sweet dish such as this White Chocolate Macadamia Biscuit and No-Churn Olive Oil Ice Cream Sundae.

Where to buy:
Online at www.marbrin.co.za
Also at selected retails outlets including Giovanni’s, The Food Barn and The Olive Branch