Billboards are a daily occurrence in the life of a city-dweller, something that you see but never really ponder, unless it’s a really good advertising campaign. Once they are removed, there’s probably even less thought about what happens to them, for the average person that is. But not for GROWbag creator Manuela Wall, who came up with the idea to recycle them into planters after seeing the incredible work that Soil For Life does for underdeveloped communities. The residents, who were taught how to make soil and then grow food from it, were using anything they could find as planters – tires, plastic bags and even shoes, and she was also reminded of her European upbringing in apartments where there are often no gardens and people want to grow plants, flowers and herbs. She had always had an idea to make planters and pots out of billboards, and finally had the chance to make it a reality. Fortuitously she met, Street Sleeper founder, Oliver Brain, who was also setting up his business of turning billboards into sleeping bags, so they came together to share a space as well as the billboards themselves. 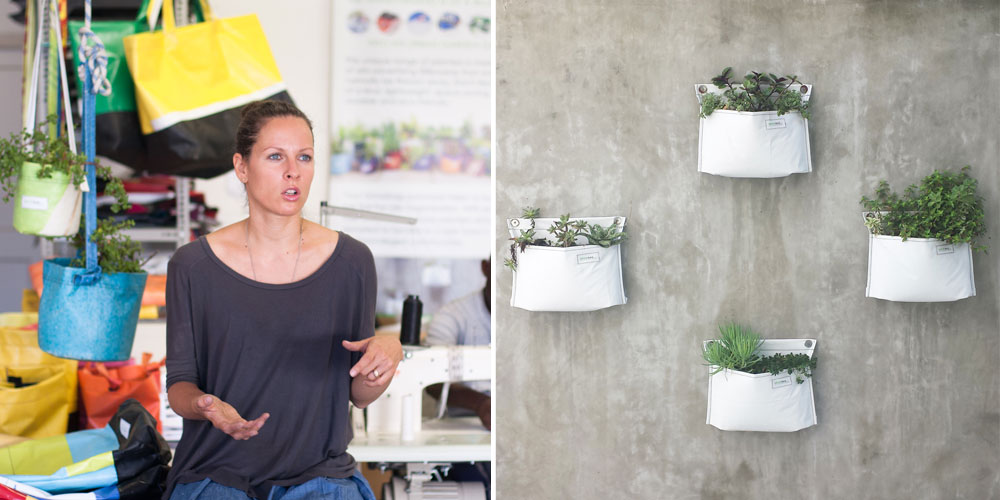 So she made it happen, and started making the GROWbag happen. Out of a small studio in the centre of Cape Town, she and her assistant, Naphtali, put the bags together. The process is much like making an item of clothing, she selects the billboard, or ‘skins’ as she likes to call them, based on colour combinations and wording. Interestingly enough, as the city of Cape Town is anti-billboard, they unfortunately don’t offer a removal service once the advertising comes down. So it’s up to Manuela’s partners to collect the discarded billboards and deliver them to the studio. The important thing with old billboards and the process of reusing them, is that they are advertising and often represent a company, so Manuela needs to manipulate the vinyl to ensure that there are no signs of a company name. From there, it’s cutting templates and stitching the pieces together. 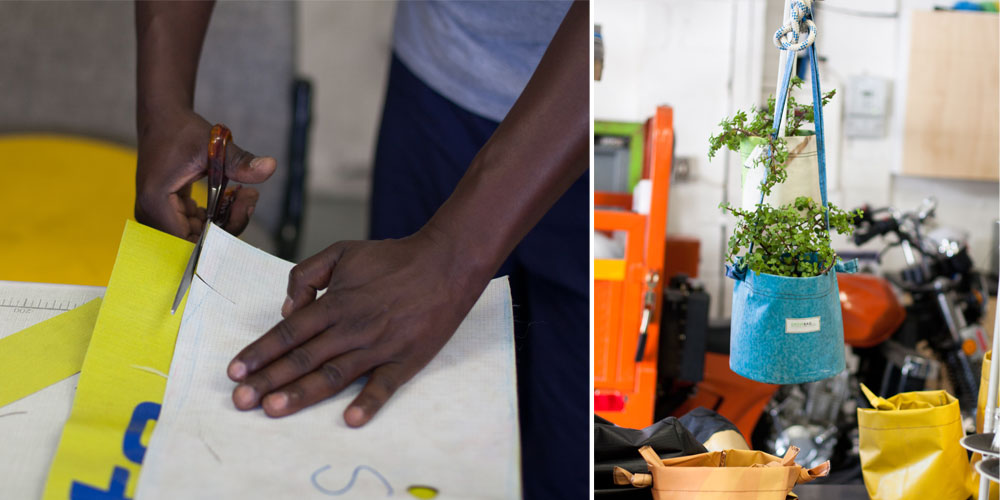 At this stage, the production of GROWbags is still quite small, Manuela always ensures that she has enough bags to donate to the communities involved with Soil for Life. She believes strongly that this keeps the residents’ motivation going as there’s a sense of pride in how good it looks. She also believes that giving bags back to the community further entrenches the notion of something that creates new life – the entire thought process behind recycling. The bags do more than just look good too, they ensure that people can plant anywhere, as well as offering the soil protection from any pests or soil diseases that may be lurking in neighbouring gardens.

In a time where recycling couldn’t be more necessary, GROWbag is making something exceptional out of raw material that would otherwise be considered rubbish. And growing her business is not about making a profit, it’s about the upliftment of communities. Look out for her bags, available in numerous shapes, sizes and colours, at various markets in Cape Town. You can also order online at her store Bonsela and when you do, take pride in the fact that you’re supporting local entrepreneurs, while storing your plants in something that looks beautiful.

For more information on this excting product and to purchase online visit growbag.co.za