Many of us tend to slip into hibernation mode during the months of winter. And as such, we thought we would dish up a selection of dinner party winners to entice you out of your burrow and back into the dinner party mood. Do you really need an excuse to throw an “Almost Spring” soirée? Well, now you have no option… so climb out of that onesie and get those guests around to impress without the stress, thanks to Cape Herb & Spice.

Plan your Next Dinner Party with
Cape Herb & Spice 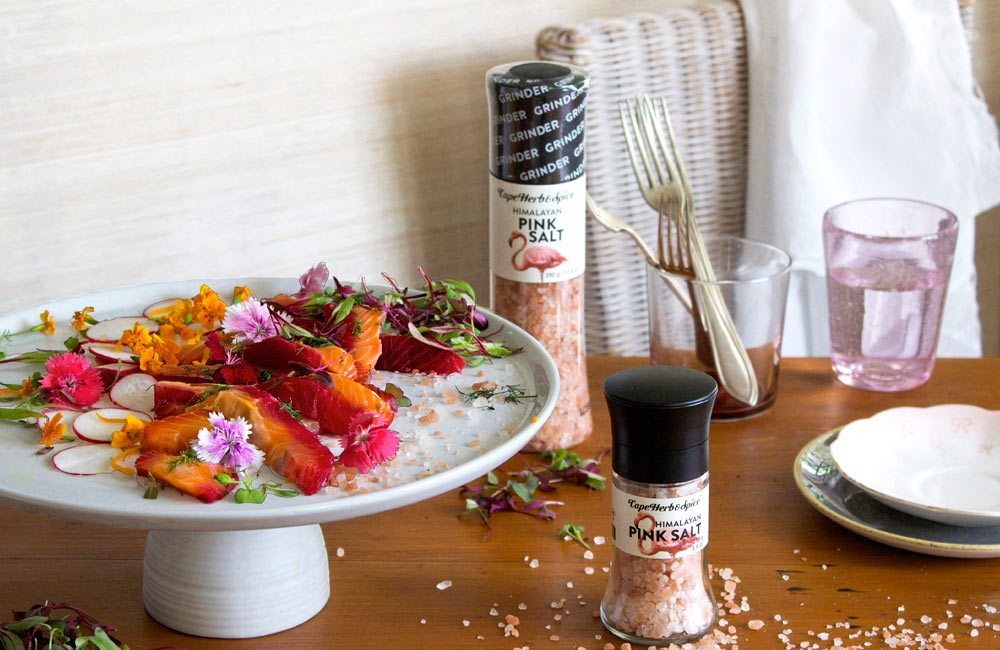 Good food needs to pass two tests in our book. Taste is obviously the most crucial and the higher the calorie load, the yummier it had better be. And then there are the looks – we’re unashamedly discriminatory here. If what’s on the plate is not a knockout supermodel 10 (ok, at the very least an 8), we’re not really all that interested.

This gravadlax passes with full marks on both counts. It’s deeply satisfying with its firm salty flesh infused with the comforting, slightly aniseed-like notes of dill and aromatic citrus. Salmon is always a thing of beauty, but it’s the addition of beetroot to the Cape Herb & Spice Pink Himalayan Salt cure that takes this to new heights of girlie pink prettiness. The result? A bright red outer rim that gradually fades to salmon-orange in the middle.

When serving this beetroot-cured gravadlax, kick its looks up to a sure-fire 10 by garnishing it not just with the traditional dill fronds, but finely sliced radish, micro herbs and loads of edible flowers.

Slice the salmon fillet in half and remove any pin bones with tweezers. Mix together the salt, sugar, zest, dill and beetroot. Scatter two tablespoons of the cure mix on a large piece of cling film. Lay the one half of the salmon skin side down on this cure. Cover it with most of the remaining cure and place the remaining fillet on top so it’s skin side up. Scatter the last bit of cure on and cover with cling film.

Wrap it up nice and tight and place it on a flat tray. Sit a board on top of the salmon and weigh it down with something heavy like a few tins of food. Pop in the fridge to cure for 3 days. Turn the sandwiched fillet over every day.

Once cured, brush off the curing mix, rinse briefly in cold water and pat dry. Slice and place on a platter garnished with pretty edible elements like flowers, dill fronds, caper berries and radish.

Serve this with buttered dark seed loaf or rye. If you like, whip up a tangy dressing of crème frâiche, lemon juice, black pepper and chopped dill. 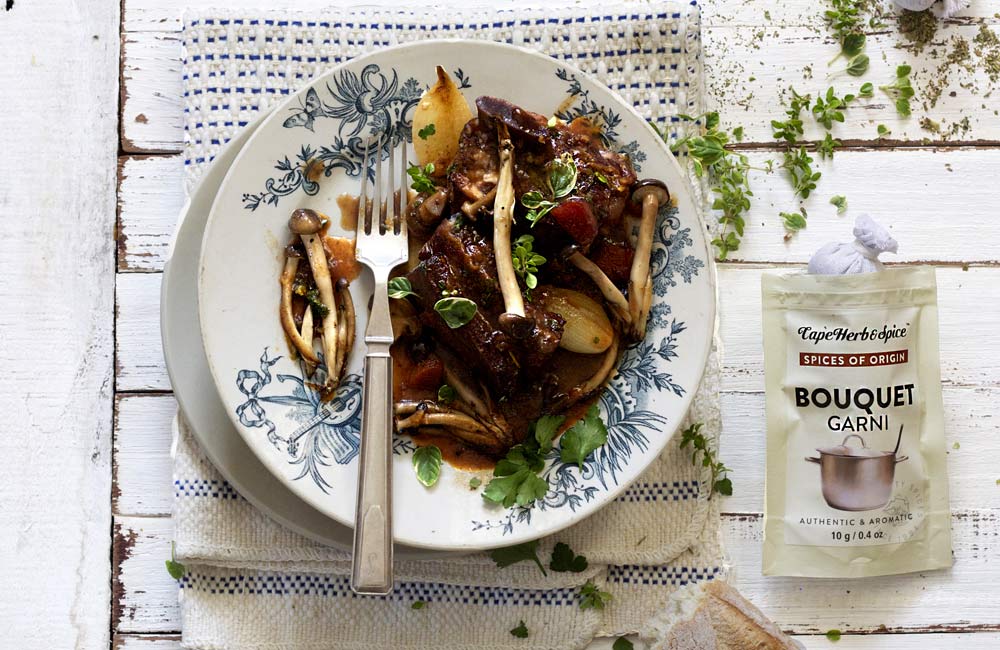 Say beef bourguignon and we instantly think of American cooking icon, Julia Child. Of course, this moreish French beef stew way predates the quirky Ms Child, but she did a lot to introduce this Gallic delight to the rest of the world. For a dish (and we’re not just talking beef here) to use the term ‘la bourguignonne’, the presence of four things is required: red wine – and a fair amount of it, plus a garnish of mushrooms, pork lardons and baby onions. That sounds pretty fine to us, so that’s exactly what we did.

Lightly dust the short rib with salt and pepper (the Cape Herb & Spice S&P shaker is perfect for this) and fry it in 4 tablespoons of olive oil until nicely browned. (You’ll need to do this in batches so the casserole’s temperature remains high enough to caramelise the meat.) Set aside the meat and add the onion, celery, carrots and a third of the bacon to the same pan.

Fry for a few minutes, stirring to lift all those lovely caramelised bits from the bottom of the pan. Stir in the flour and cook whilst stirring until it disappears into the vegetables. Now add the garlic and tomato paste and fry for a further minute.

Add the wine and cook rapidly for a minute, then add in the beef short rib, stock, black pepper and a Cape Herb & Spice Bouquet Garni. Put the lid on and simmer it in a gentle 160 ˚C oven until the short rib is fall-off-the-bone soft – we’re talking a good 3+ hours, this is assuming you have an ovenproof enamel Dutch oven. If you don’t, you can easily make this dish on your stovetop – simply place the pot on your smallest plate, on its lowest setting.

Once done, remove the bouquet garni and taste for salt. You will definitely need to add salt, but how much depends on the sodium content of the stock you used.

Scatter the bacon, mushrooms and onions over the beef bourguignon and, for a pop of colour, give it a sprinkling of chopped parsley. Serve with crusty baguette or creamy mash. 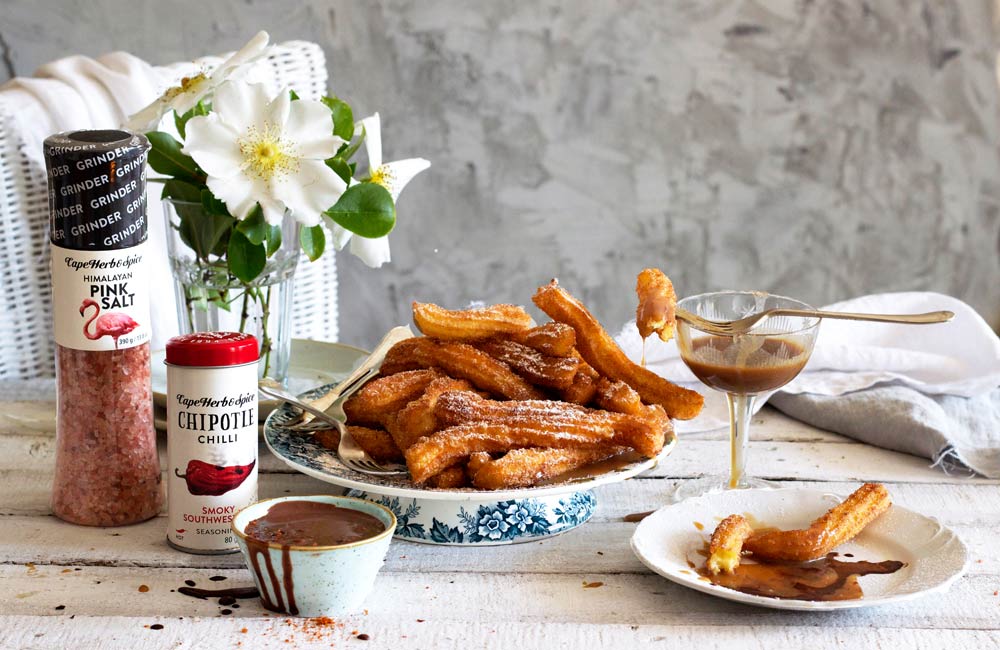 The origin of churros is a little contested – as these things often tend to be. Some credit the Spanish for the yummy fried choux pastry fingers. Others credit the Portuguese. Either way, they made their way over to Latin America during the time of the conquistadors, where today they’re pretty much a breakfast staple dipped into chocolate sauce. Not a bad way to start the day to be sure, but we think churros are some of the best dinner party winners!

People can’t get enough of them and they look like you went to loads of trouble – while actually, you didn’t. That’s the way clever peeps entertain – minimum effort, maximum impact. To impress even more, serve your churros with not one dipping sauce but two!

This recipe serves 4-6, with loads extra for seconds

Heat the cream until it’s just under boiling point. Pour the cream over the chocolate and stir until it is completely melted. Stir in the vanilla and a pinch or two of your favourite Cape Herb & Spice Chilli Seasoning. Cover and allow to cool to room temperature. It will thicken as it cools down.

Add all the ingredients to a saucepan except the salt. Slowly heat it whilst stirring. Once it comes to the boil, turn the temperature right down and boil for 5 minutes, stirring occasionally. Give it a few grinds of Cape Herb & Spice Pink Himalayan Salt, cover and allow to cool.

Bring the water and butter to a vigorous boil in a large saucepan. Remove from the heat and stir in the flour and salt. Keep on stirring it until the dough forms a ball. Now break in the eggs one by one, stirring the dough vigorously until each egg is incorporated before you add the next. It will initially seem like its splitting and will never come together – rest assured, it does.

Spoon the dough into a piping bag fitted with a star nozzle.

To fry the churros, pipe 5-7cm long strips of dough directly into hot oil at least 5cm deep. Fry until golden and crisp.

Drain on kitchen towel and toss in cinnamon sugar while warm. Serve right away with the dipping sauces.

Love these dinner party winners with Cape Herb & Spice? Check out some of their Asian-inspired recipes.