If there was ever a time to enjoy a cheeky curry, it’s now. There is nothing that perks you up quite like the bite and spice of a curry when the days are short and cold. We are very lucky in South Africa, to be able to get hold of some pretty authentic curries. But, we’ve barely scratched the surface in terms of the variety of Indian curries out there. To help you out, we’ve put together a guide to different types of Indian curry. 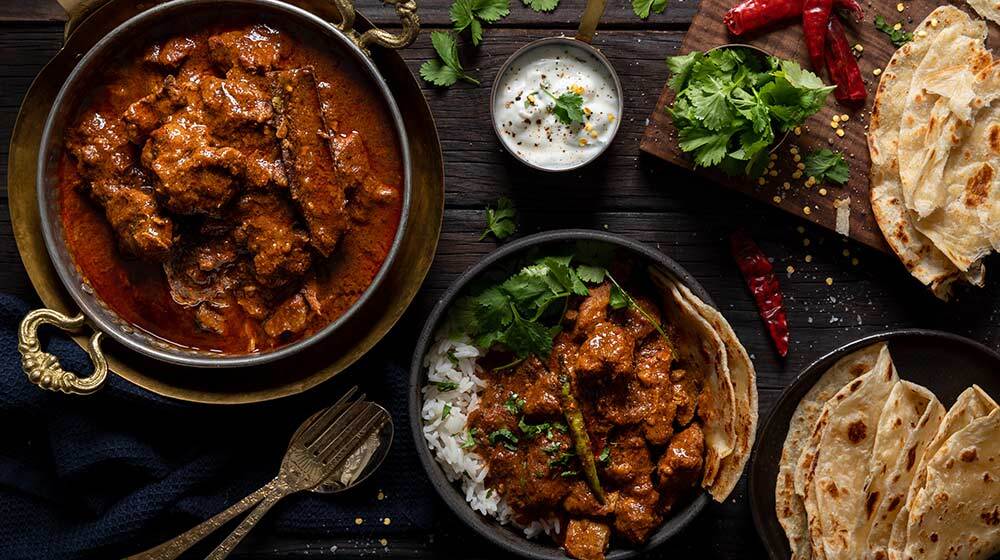 Indian cuisine dates back to nearly 5,000 years ago when various groups and cultures came to inhabit India. This led to a melting pot of flavours and regional cuisines and Indian food comprises of a number these regional cuisines. The variety in soil type, climate, culture, ethnic group and occupations ultimately means that these cuisines differ from each other due to the availability of local spices, herbs, vegetables and fruits.

Indian food is also influenced by religion, as well as cultural diets and traditions. Think you know your curries? Check out our ultimate guide to different types of Indian curry and see how you fare…

Achari stems from the word ‘achar’, which as we know, is a pickle. So, achari curries are made with pickling spices. This is a traditional curry in the Punjab region of India, sort of North-Westerly, lying on the border of Pakistan. The spices most commonly used in the curry are turmeric, fenugreek, black onion seeds, Kashmiri red chilli powder as well as fennel, cumin and mustard seeds. Mustard seed oil is very important in a traditional achari curry.

Balti is technically a method of cooking, rather than a recipe. The word balti refers to the cast-iron dish used – it is wok shaped and has two handles on either side of it. There is much controversy around balti curry, as it’s believed to be ‘more British’ than Indian. Despite this, you can often expect a balti curry to have a thick tomato-based gravy and that the protein used would have been stir-fried in the balti before being added back into the curry sauce.

A bhuna curry is one in which the spices have been gently fried in a generous amount of oil, to which meat is added and then left to cook slowly in their own juices. This isn’t an overly saucy dish, but will have lots of deep, spiced flavour.

Essentially the same as bhuna — bhindi ghosht is a relatively dry, rather than saucy, curry which has had okra added to it.

Possibly one of the most popular dishes in out there, especially in South Africa. Biryani isn’t technically a curry but is a curried, aromatic dish of basmati rice, spices, meat, herbs and either curd or yoghurt. Biryani can be made with any meat, vegetables or even paneer, but was traditionally made with mutton.

Normally made with chicken and so often called Bombay chicken — Bombay curry is recognised by the inclusion of desiccated coconut and vinegar. Traditionally light stock is made using a whole chicken, then the skin and bones are discarded. Following this, spices are added along with that all-important vinegar and coconut.

Technically a Sri Lankan dish, Ceylon curry has been adopted into Indian culture. The name Ceylon refers to a curry mix of coconut, lime and a hot curry powder. This gives the resulting curry a spicy and acidic flavour.

Chicken 65 is an iconic dish which originated in Chennai, Eastern India. Essentially, it consists of deep-fried chicken pieces that are then coated in a super spicy sauce. The curry itself can vary depending on where it’s being made but usually the sauce needs to contain Kashmiri red chillies for that certain kick. It can be eaten as a snack or as a starter.

Originating from the Punjab region, Dahi Wala requires the protein (mostly chicken) to be marinaded in yoghurt for at least two hours. The spices are added to this along with tomatoes. This is most likely the closest Indian curry to butter chicken, which is traditionally Pakistani.

This curry comprises lamb shanks cooked in a tomato-based sauce and is a staple in Northern India. Sucking on the shank bone is apparently encouraged and we’re happy to oblige. This dish is most similar to Rogan Josh, but has added tomatoes.

This is a popular dish in India that combines Parsi (descendants of Persian natives) and Gujarati cuisine. It traditionally includes mutton or goat along with lentils (or dhal), and is served alongside distinctive caramelised brown rice. The result of slowly cooked lentils, vegetables and meat is something that is decidedly more stew-like than curry.

Do piyaz, literally translated from Hindi means ‘double onions’ — basically you’re dealing with a lot of onions in this curry. The method calls for finely chopped onions to be added in the beginning, along with spices, which are then allowed to soften and caramelise. Fried onions are sprinkled on top when served.

Named for the capital of the Rajasthan region in India, Jaipur curry is identified by the addition of coconut milk and chicken.

Jalfrezi, one of India’s most loved curries, which involves marinating pieces of meat, fish or vegetables and then frying them in a spiced oil. This produces a dry, thick sauce, as opposed to a soupy, saucy one. As the dish includes green chillies, jalfrezi can range in heat from medium to very hot and it’s also known to include peppers, onion, cabbage and tomatoes.

This red curry is native to the Rajasthan area of India. It is made with lamb and is known for being fiery, due to the generous inclusion of Kashmiri red chillies.

Karahi dish is similar to a balti, and so can sometimes be interchanged with balti recipes. The most well known karahi dish is made with chicken and hails from Northern India.

Kashmir, in the north of India, is home to the Kashmiri curry. Usually made with chicken, whole garam masala and dried fruit, this mildly spicy curry is sweet, creamy, and rich.

One of the few Indian curries to contain beef, keema is identified by the use of mince and tomatoes.

Kodi kura is traditionally found in the Andhra Pradesh region, which is on the South-Eastern coast. Mostly made with chicken, this curry also uses coconut milk, thanks to its tropical position in India.

These almost need no introduction, as the spiced meatballs are hugely popular all over the world. These can either be served as is, as a snack or within a curry sauce, alongside rice and flat breads. 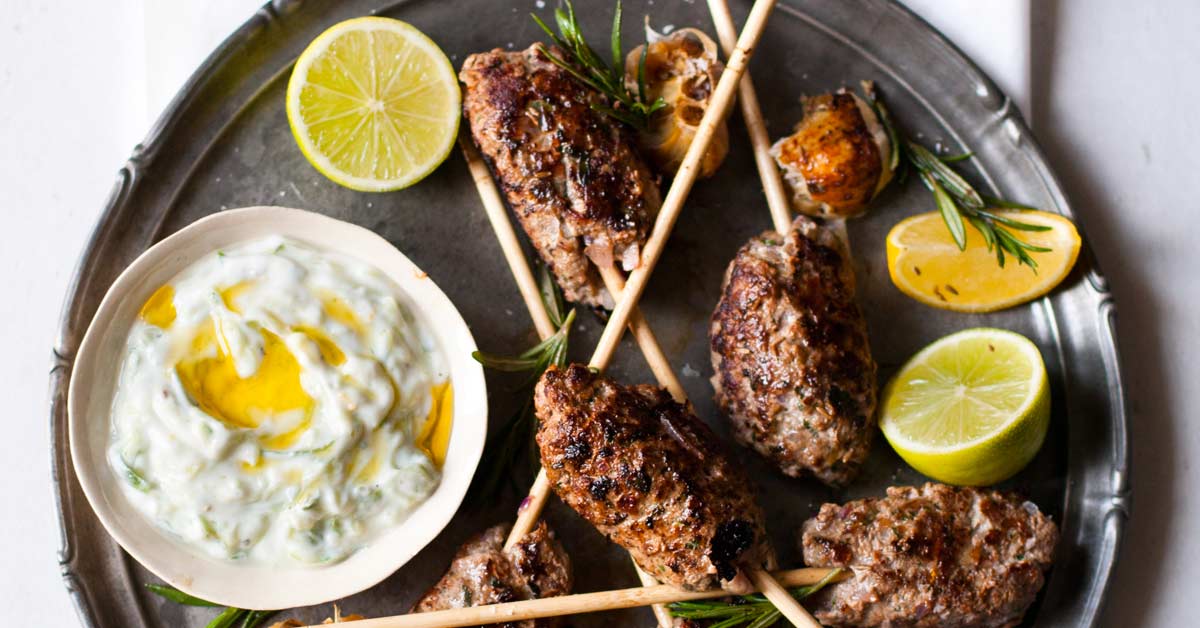 Hailing from the western region of Kolhapur, this curry is very similar to a butter chicken, in that the sauce is tomato and yoghurt-based.

The ever-popular korma is defined as a dish where meat or vegetables are braised in water or stock and then either yoghurt or cream are added. The spice combination of korma generally includes ground coriander and cumin, combined with yoghurt kept below curdling temperature which is then emulsified with the meat juices. Korma is fairly adaptable and can be mildly spiced or fiery, and can include any kind of meat. Some kormas even combine meat and vegetables, such as spinach and turnips. 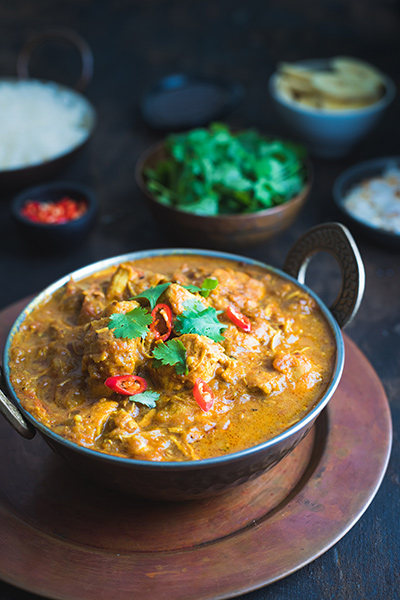 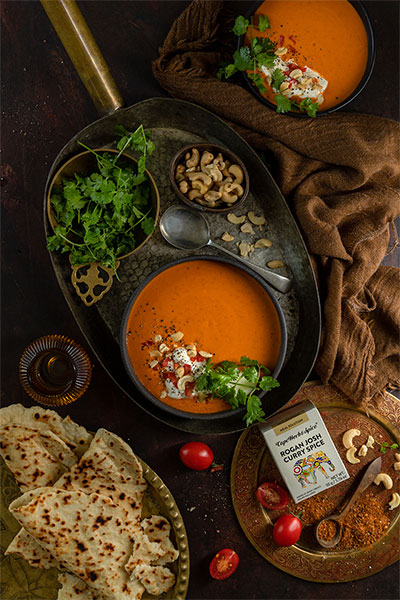 Believed to have been introduced by Jewish settlers in Cochin, a coastal town in Kerala, this curry incorporates roasted coconut into the gravy, resulting in a thick, aromatic sauce.

Recognised by its golden hue which comes from the generous addition of turmeric,  this curry incorporates two cuts of lamb – pieces of bone-in lamb leg, as well boneless lamb leg. Kundan kalia is traditionally from the Uttar Pradesh region in Northern India.

Lal maas is a very famous dish in India, particularly in Rajasthan, where it originated. It’s a mutton curry, with a sauce made from curds and lots of red chillies.

A madras sauce can be cooked with a number of different proteins but is usually known to be quite spicy and very red in colour (because of the quantity of red chillies used). The sauce is believed to have originated in Chennai.

While makhani (a Hindustani word) itself may be unfamiliar, the translation is one that all South Africans will know. It is directly translated as ‘with butter’, so that means chicken makhani is – yep, you guessed it – butter chicken. It is recognised by its cream and yoghurt based sauce and sometimes, the addition of ground cashews.

Mughlai denotes a cuisine in Northern India and is a classic Indian culinary tradition. It originated when ancient rulers, the Mughals, reigned over India. The cuisine incorporates the traditions of Persia, Middle East and India, in its cooking style and use of spices. Mughlai curry is milder than the ‘average’ Indian curry and features many fragrant spices such as cinnamon, nutmeg and cloves, along with rich nut pastes and cream.

Continuing with the Mughlai cuisine, Murgh mussallam is a traditional dish from the region. It’s essentially a ‘whole chicken’, smeared with masala and roasted in the tandoor oven.

Nihari is a slow-cooked stew, consisting of lamb on the bone (or in some rare cases, beef), including the bone marrow. The main spice used in a nihari is the Indian long pepper, or pipli, which gives the dish its unique spicy flavour notes.

This well-known dish requires meat (usually lamb) to be marinated in yoghurt and spices, before cooking everything together to make a creamy, saucy curry.

Pathia is an ancient Parsi curry, which is very popular in the U.K. It is hot, sweet and sour, owing to the use of tamarind. To get that balance just right, pathia is based on a blend of tamarind and lime, with jaggery (unrefined cane sugar) to correct the acidity.

Originating in Bangalore, phall is a snack dish made from spiced chicken. This chicken doesn’t sit in a gravy or sauce.

One of the signature dishes of the Kashmiri cuisine, a Rogan Josh will always be made from lamb and liberal amounts of Kashmiri chillies, which give it its iconic red hue. 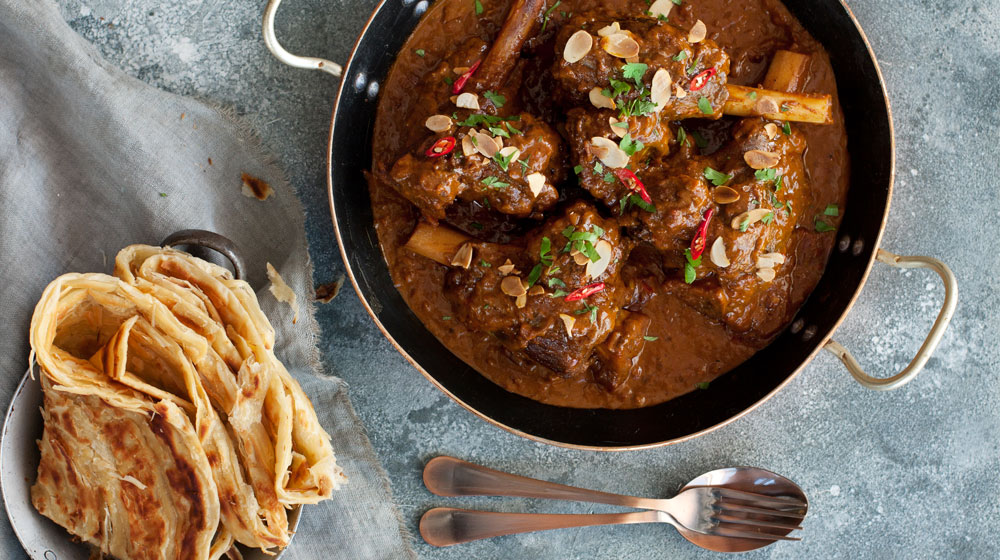 Anything with the word saag in it will contain spinach, kale, collard greens, chard, or any sturdy green leaf. The most well known is the saag aloo curry, which a curried mix of potatoes and spinach.

Essentially the same as a laal maas, but with a slight difference – this curry features mutton cooked in a white gravy made from ground nuts.

This meat-based curry features the addition of fresh corn kernels.

As this dish is so popular, many different versions of it exist now. What we know for sure though, is that it contains roasted chunks of marinated chicken (often roasted in a tandoori oven) and is coated in a mildly spicy, orange-hued sauce. Try this Tikka Masala recipe.

A vindaloo is an infamously-spicy dish that hails from the Goa region of India. It can be made with a number of different meats, but mostly features pork as a throwback to a dish brought by the Portuguese when they arrived in India in the late 1400s. Try this Lamb Vindaloo recipe or Pork Neck Vindaloo recipe. 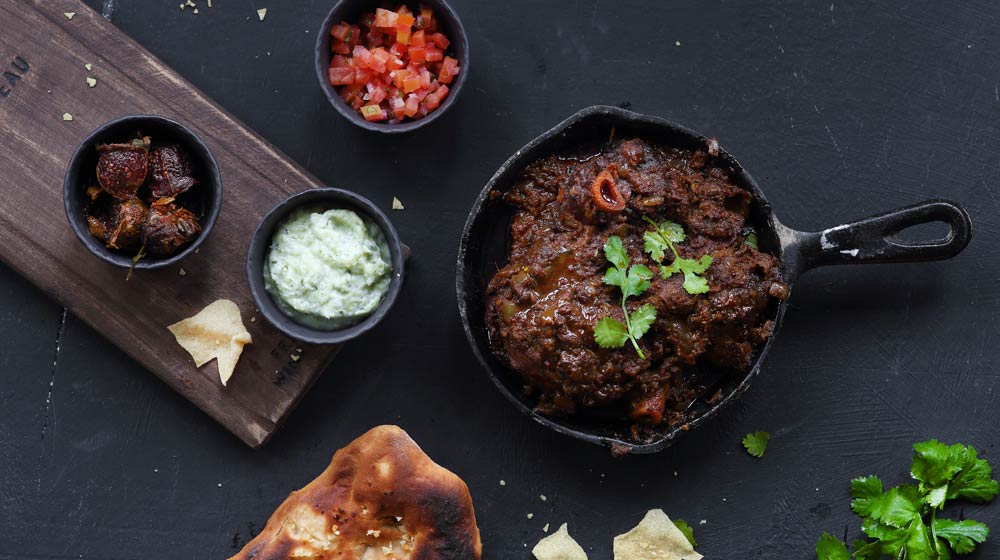 Check out our guide to making the best chicken curry ever.