South African desserts are a big part of our culture because we are definitely the nation of sweet teeth and rich food. I mean, what else would we be eating after a lovely Sunday lunch with the family? There are dishes that trigger happy childhood memories and for us South Africans, it could be any one of these traditional and classic desserts unique to our beautiful country. However, do you know how these puddings came about? Well grab a seat and get to know the origins of some of our favourite South African desserts. 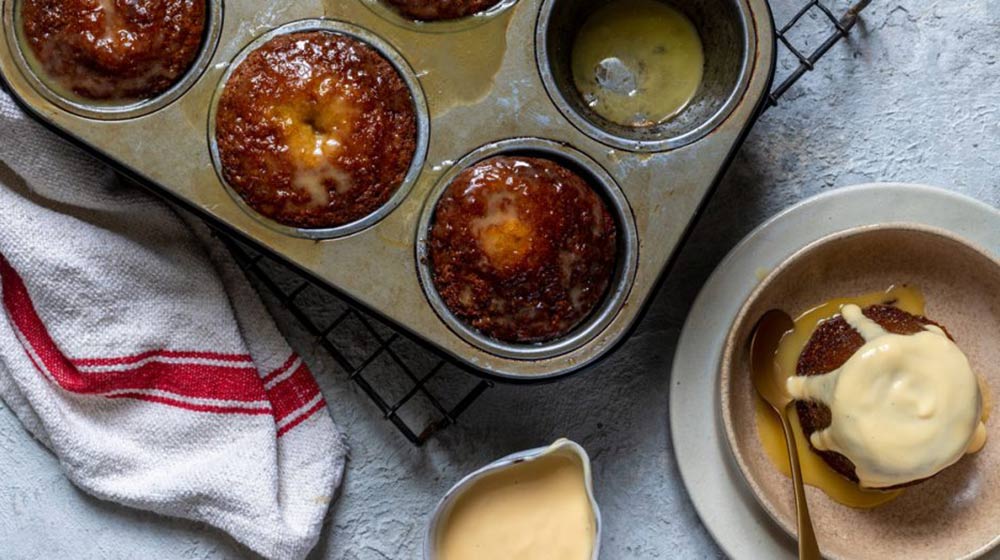 A dessert like this has deep roots, where families have passed down their traditional recipe through the generations. So it might come as a surprise to find that this iconic dish isn’t as old as you might think. There was a similar kind of pudding with the same name around 1924, but it was lacking the apricot jam and was boiled, not baked. Read more about this as investigated by food journalist Nikki Werner here.

South African food and wine expert Michael Olivier claims on his website that he is known as the ‘godfather of the Malva Pudding’. He received this title when he invited Chef Maggie Pepler to do a stint in the kitchen at Boschendal Wine Estate in 1978. This is where Malva Pudding really became popular and very famous. 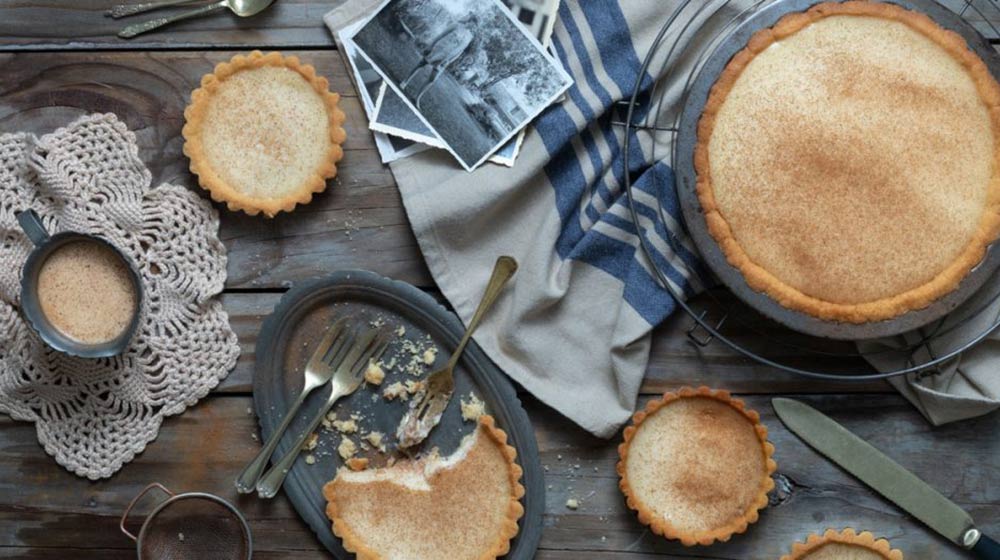 When you think ‘South African desserts’, none seem quintessentially more South African than the humble Milk Tart. The flavour has become so synonymous with South African culture and you’ll be hard-pressed to find a South African who doesn’t love it.

Melktert (Milk Tart) is said to have originated from the Dutch settlers who arrived in Cape Town in the 1600s. The milky filling is a giveaway that these settlers were dairy farmers and to those pioneers we are forever grateful for this dessert.

There are lots of variations of Milk Tart – our top honours go to the fridge version – a smooth, creamy milk custard set in a crispy biscuit base. It has just the right amount of jiggle and just a whisper of cinnamon on top. It’s perfection and that’s all there is to it.

To understand where this favourite dessert came from, we first need to look at where the now famous Peppermint Crisp chocolate bar was created. What makes this truly South African is the chocolate was invented here! Wilson Rowntree created it originally in the 1960s, however, it is now produced by Nestle who bought them over.

What is even more amazing, is how people got creative with it to make the most mouth-watering local is lekker dessert. The classic Peppermint Crisp Tart is something just about every South African would have had. All you need to make the basic recipe is Tennis Biscuits, tinned caramel, heavy cream and of course Peppermint Crisp chocolate. Sound heart-stoppingly sweet? That’s because it is! But it remains a popular minty choice nonetheless. If the Peppermint Crisp ever met its ending like the poor Chocolate Log there would be an outcry across the nation!

If you are more adventurous and want a challenge, try this version of that same dessert in cake form. 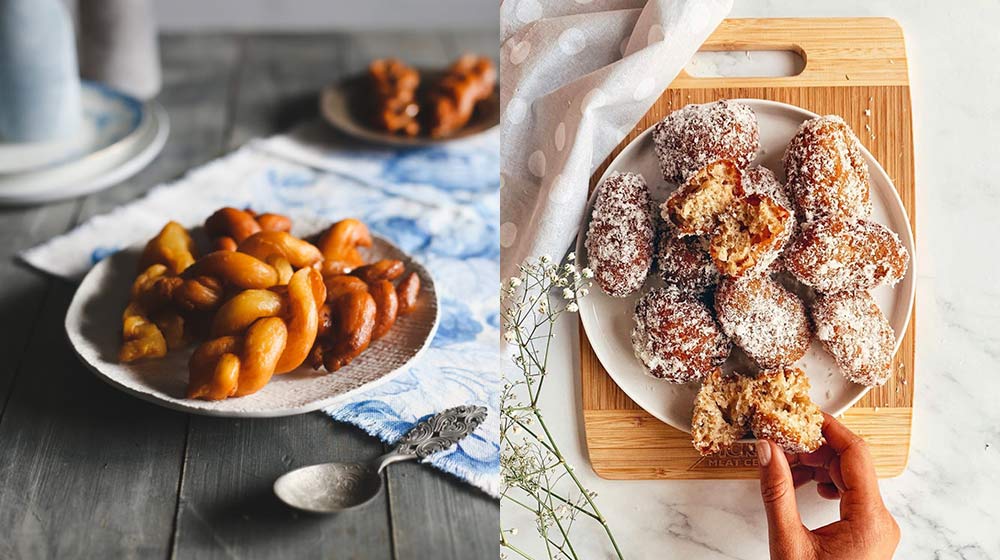 Every South African knows what a Koeksister is and the best way to have it, with a cup of coffee on a beautiful Sunday afternoon. The ultimate heavenly treat. From the syrup, to the crisp exterior, comfortingly doughy interior and the prettiest braided shape, the Koeksister really makes the perfect bite.

The Afrikaans Koeksister has quite an interesting past. Evidently, two recipes were brought to the Cape by Dutch settlers. One was for a fried doughnut-like treat and the other was for a thin bowtie-like dessert made out of pasta dough. Ultimately, some genius thought to combine the two recipes and began braiding the dough instead of leaving it in a little ball.

Today, the process is quite tricky and takes a lot of practice to get the perfect Koeksister. So get baking and enjoy those less-than-perfect ones, cause they taste great too!

For the Cape Malay version, it is exceptionally popular and a long-standing tradition to eat Koesisters for breakfast among family. Originating from our communities in areas like Bo-Kaap and District Six, long before Apartheid. Even during and after this period, the tradition continued and spread and still continues today.

The Koesister are prepared from balls of dough including yeast and flavoured with cinnamon, aniseed, ginger, cardamom and dried tangerine skin powder, deep-fried in oil, allowed to cool, then cooked for a minute in boiling syrup and rolled in desiccated coconut. From these flavours, it is a sign of Indonesian roots, probably from slaves brought to the Cape.

For most South Africans Koesisters are a part of our culture. They are not just a breakfast treat but are a staple at almost every kind of event we host. You will find these delectable doughnuts at funerals, parties, religious ceremonies and even graduation ceremonies. It is an ideal treat that brings everyone together. This is apparent by World Koesister Day which was first celebrated Sunday, 1 September 2019. Now it is commemorated on the first Sunday in September. So get ready for next year!

To show how much it is loved, it is best said by Chef Naseer Abdullah, “Whether you make them for others or enjoy them for yourself, it is a dish that will carry on for generations.”

Another classic South African dessert is the Hertzoggie, which is always a favourite on the table at a bake sale or Church bazaar. To prepare one of these indulgences, start with an open top pastry base and fill with apricot jam. It should then be topped with desiccated or grated coconut meringue topping and baked.

Another fascinating history, the Hertzoggie came about after Prime Minister, J.B.M Hertzog promised to give women the vote and the coloured community equal rights. So Cape Malay womxn created this treat in his honour. After a couple of years, the Women’s Enfranchisement Act of 1930 made it clear that only the first of these promises would be fulfilled, the women once again took to their ovens and created a new version of the tartlet. This version had brown and pink icing and decided they would call it tweegevrietjie or ‘two-faced cake’. Now you know you should never double cross South African womxn.

Making Boeber is a Cape Malay tradition for the 15th night of Ramadaan, which indicates the middle of the fast. This rich, creamy milky drink with vermicelli, sago, cardamom and cinnamon was drawn from Indonesian ties, but wherever it came from Cape Town certainly has adopted it as their own. Now, it is eaten all over the world and there are various variations. So however you like it, make it your own! Try adding some rose water, almonds or pistachios.

What is great about this delicacy is that it is mostly made using family recipes. If you don’t have such a recipe but want to give it a try, there are Boeber mixes available in some supermarkets and spice shops all over South Africa. Either way, Boeber should definitely be on your list of desserts to enjoy!

It might be a traditional dish for Christmas time, but who can resist a serving of Cape Brandy Pudding any time of the year? To have to refrain from that rich, sweet and sticky heartwarming dessert just because of the time of year would just be a crime! Cape Brandy Pudding is also known as Tipsy Tart or even Dadelpoeding, whatever you call it, it’s sticky, sweet and delish.

The heritage of this desert is intrinsically linked to brandy production in the Cape – which is big business down here. So much so, that for many years most of the Chenin Blanc grapes planted were predetermined to go to the brandy production. The dish is similar to that of malva, a baked pud with a sauce that soaks into the sponge. The major difference here being the addition of dates, nuts and of course, brandy. It’s also so simple to make and you can enjoy it with whipped cream, ice-cream or custard.

In contradiction to what the name may say, the tart won’t make you tipsy, you’ll need an extra shot or two on the side for that!

In the 1980s, there was a TV ad featuring Cremora, which is a powered, non-dairy coffee creamer.  After the advert was released, this successful dairy substitute was transformed into a household brand and before long a new fridge tart was born. It might not seem like the best ingredient to use for a dessert but many will surrender to the pleasure of the Cremora Tart when taking their first bite.

For the classic version, it is a no-fail, quick and easy bake to satisfy your sweet tooth. This tart is like the love child between a Peppermint Crisp Tart and a Cheesecake. All you need is a biscuit base, Cremora, water, condensed milk and lemon juice. Many have made the Cremora Tart their own and have taken it to the next level where you wouldn’t even know that Cremora was used. It may not be featured in your baking sessions, but next time give it a try. You won’t regret it!

Melkkos, which translates to ‘milk food’, is a South African dessert that you may remember from childhood spent in your grandma’s kitchen. It is similar to Boeber, but easier and simpler to make. The main ingredient is milk and you just need to add some flour and butter. To make it even better, sprinkle with a bit of cinnamon sugar on top! It can be enjoyed all year round, but it is best in winter as it warms you right up. 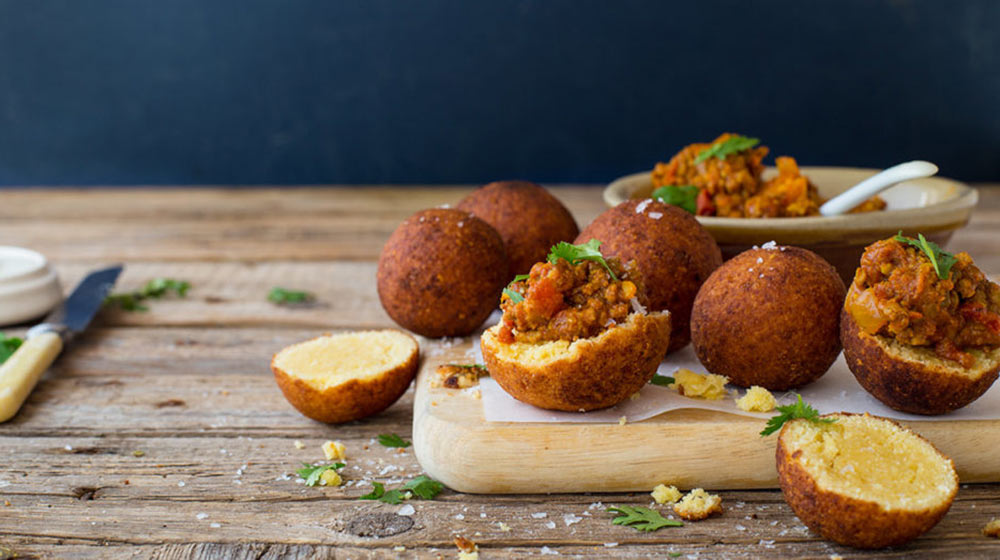 Vetkoek, which means ‘fat cake’, is a traditional Afrikaner dough pastry. The dough is deep-fried and can be stuffed with either sweet or savoury fillings. It is very similar to Mexican sopaipillas in consistency and taste.

These dough balls are actually very traditional. They originated from the Dutch ancestry of the first settlers in the region they had a similar pastry called ‘oliebollen’. Fun fact, the settlers preferred to deep fry their version of Vetkoek as these lasted longer compared to traditional bread.

There is also a South African Black Township version called Magwinya. It is very similar to the original version but it is served with a piece of snoek fish. It is a very versatile dough!

There you have it! Some history on our favourite South African desserts. However they came to be, they are now a part of our culture and we are happy to eat them whenever we can. With Heritage Day coming up, enjoy so many of these desserts while celebrating this wonderful country we live in. 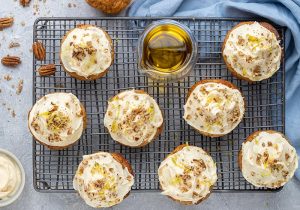 Just Some of our Favourite Bakes: A Cake, Cookie and Tart Recipe Round-up 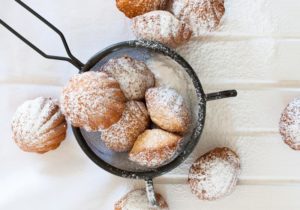 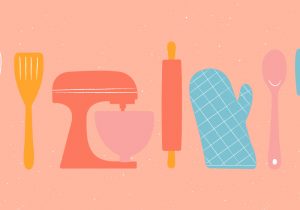 Our Best French Baking Recipes – Be a Better Baker!