When it comes to baking there really is no room for error. Unlike cooking, you have to follow the recipe and measurements to a tee to avoid disappointment. However, you can make substitutions when it comes to the flour, just make sure you understand that not all flour is created equal.

One of the most important nutrients in flour is protein. The texture and moisture of baked goods are reliant on the protein content of the flour that was used. Confections made with a lower content of protein (5-10 %)  tend to be softer, whereas ones made with a higher protein content (10-14 %) are more likely to be denser and more extensible. It’s true what they say, baking really is a science.

The Different Types Of Flour 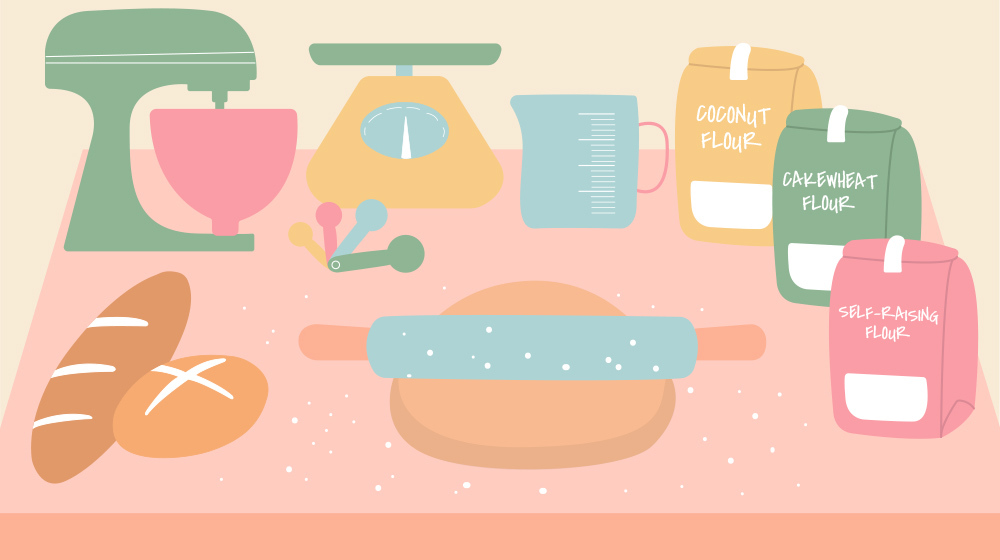 Self-raising flour is the most common and is pretty much used for everything. It has a protein content between 10 and 12 percent, it’s perfect for baking muffins, bread, cookies, etc. If you only have cake flour in your pantry you don’t have to do much to substitute, just measure it gram by gram. If you want your baked goods to come out softer and lighter, you need to reduce the protein count- you can do so by mixing different flours.

Whole wheat has more nutritional value than your ordinary white flour. It does, however, make baked goods denser and a lot heavier. This is because it has a high protein content of 14 percent. If a recipe calls for self-raising you can replace some but not all of it. Use 3/4 cup of whole wheat for every 1 cup of white flour that your recipe calls for. In order to ensure that your treats don’t come out too dry add 1-2 teaspoons of water.

Spelt comes from the same family as barley and rye. Despite it being a whole grain, it does not produce heavy baked goods. This produces a light texture, which is why it’s easier to substitute. Spelt can be replaced by a 1:1 ratio, in other words, cup for cup. However, spelt does not soak up as much liquid as other grains so you might need to reduce the amount of liquid when mixing. This is done to avoid your treats from getting too sticky.

Bread flour has a high protein content of 13-15 percent making it perfect for yeast bread. Even though it has a higher protein content than self-raising flour it can be substituted on a 1:1 ratio. If you don’t have bread flour but want to make bread or pizza you still can – it might just be a little less chewy than usual. Vice versa, if you use bread flour when a recipe calls for self-raising it might make the dough a bit dry so you might need to add a tablespoon more of water.

Coconut flour does not contain any gluten, which makes it more likely to crumble easier. It has about 4-5 percent protein and is super absorbent. So when used for baking, it normally requires more eggs to help the baking rise and improve texture and moisture, because there is no gluten the eggs are needed to hold it together. You cannot replace it with a 1:1 ratio, because it is quite absorbent, so you will need less than a recipe calls for with regular flour. For every cup of grain flour, it will only require ¼ cup of coconut flour.

Almond flour is great for people who are trying to lead a no-carb lifestyle. It’s made from blanched almonds that are grounded into a fine powder. It has about 6-7 percent of protein content. Unlike coconut, almond flour can replace wheat flour at a 1:1 ratio. Since it lacks gluten like coconut flour, baked goods made with it tend to be a lot denser and flatter than those made with wheat products.

Cake flour is on the lower protein content side with 6 – 8 percent protein, which tends to produce a more delicate, light, fine-crumbed texture to baked goods. Some people, however, do prefer using it when making cookies for that extra crunch. It can be used to substitute other flours, for every 1 cup of self-raising, you will need 1 cup plus 2 tablespoons of cake flour. Vice versa for every 1 cup of cake flour, remove 2 tablespoons from 1 cup of self-raising.

Pastry and cake flour may be similar but they aren’t the same. Pastry flour has a protein content of 8-9 percent, making it softer. It can also be swapped with self-raising but you have to use the same rule as cake flour. The only difference is if you’re using self-raising when a recipe calls for pastry make sure to remove those 2 tablespoons of flour and 2 tablespoons of cornstarch.

Rye has a high protein content around 11 percent. Rye has different gluten-forming properties than most, in other words, does not form as much gluten. This means that rye cannot be directly substituted for cake wheat or bread flour but you can use other flours mixed in with rye. Using 100% rye means your baked goods could come out with a tangy flavour and can be a bit dense.

Because buckwheat contains no gluten and is not a grain like rye, it makes it hard to substitute with other flours if you want a gluten-free, dense baked good. However, you can substitute it with bread or cake flour cup by cup. Keep in mind that those have gluten in them so your goods will come out slightly crisper than the buckwheat version. If you are using buckwheat, remember that it absorbs lots of moisture just like coconut flour, so you will need to adjust accordingly when baking as the batter may require extra liquid.

Shopping For Baking Essentials During Corona

*If you want to make a difference shop from Shop For Health Care Heroes. Jarred and Dean Freedberg, the founders of FreeKapital and The Ghost Kitchen, a web-based restaurant delivery business known for its high-quality brands such as Pizza Co, Burgerboss, Slaai | Urban salad co. and Snack Snack have come up with this site, an online groceries and basic essentials retailer where ALL of the profits will be donated to hospitals fighting on the Covid-19 front line. A true essential delivery service if you ask us.