If you’re a meat-eater, and better yet, if you’re an avid meatcooker, then you’ve probably thought to yourself “it’s about time I learn the different cuts of beef”. You’re right! It is. At Crush we’re big advocates for understanding every part of the animal, as it helps you cook and enjoy it in the best possible way. 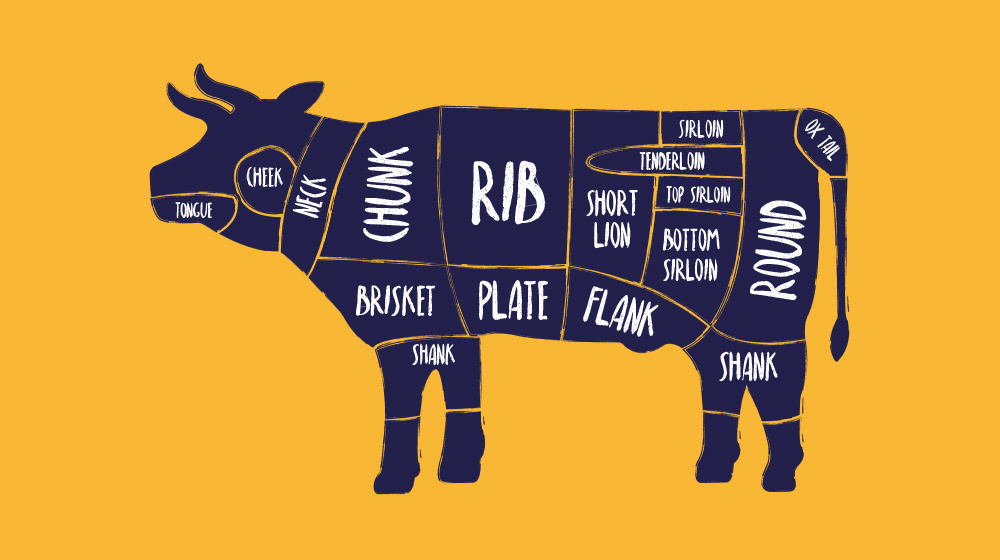 We’ve put together a basic explanation of the different primal cuts of beef and how to cook them. We’ve even thrown in a few recipe suggestions to really hone your skills.

When beef is butchered, it’s divided into sections called primal cuts, like the ones you see in the above illustration. Each cow produces two sides of beef (literally one side of the animal) and these are then divided at the ribs to produce a forequarter and a hindquarter, making it easier to categorise the primal cuts.

The primal cuts will then be further divided into food-service cuts, which are then cut into individual portions for eating or retail. Each primal cut represents a different part of the animal and where the cut sits on the animal determines its toughness and tastiness.

A cow’s legs and neck area are the most worked muscles, hence are very tough and require longer cooking time. Cuts that sit more towards the hindquarter and away from the hooves are considered more tender and easier to cook and are therefore more expensive. These include the sirloin and short loin. 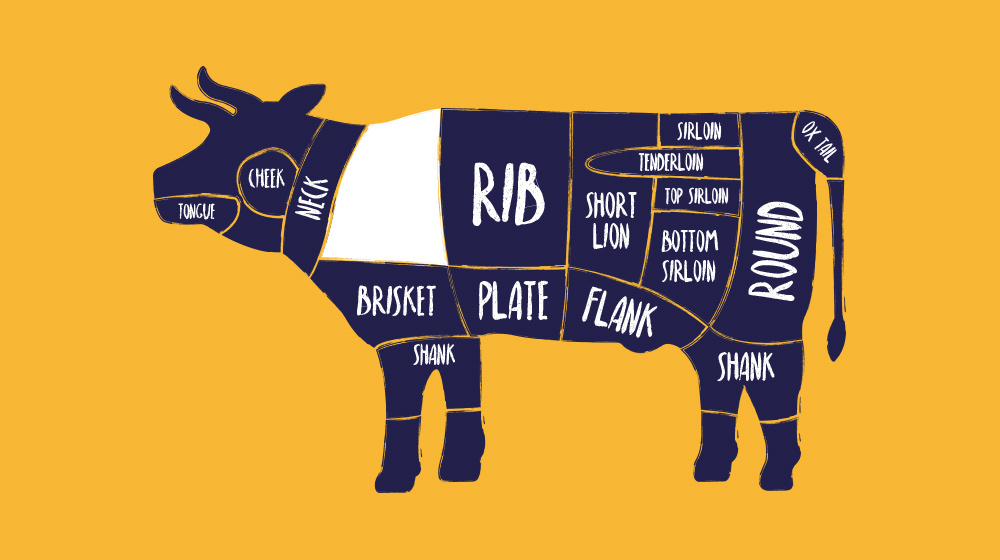 The chuck is a primal cut from the forequarter and consists of parts of the neck, shoulder blade and upper foreleg. This cut is notoriously very tough, but very flavourful due to its high fat and connective tissue content. It needs to be slowly braised and served as a stew or roast. Some butchers will also include it as part of ground beef, because of its high fat content. 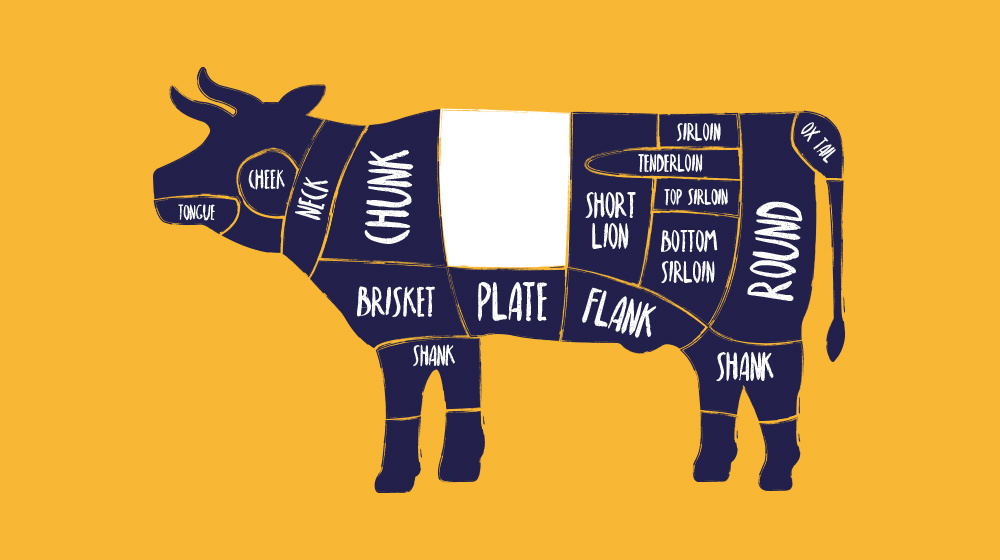 The beef rib primal cut comes from the centre section of the rib and yields standing rib roasts and the ever delicious, ribeye steak. Beef rib cuts, unlike the chuck or brisket, are already quite tender as they come from the top part of the cow. They therefore respond well to dry-heat cooking, like a quick sear on the grill or cast iron skillet. 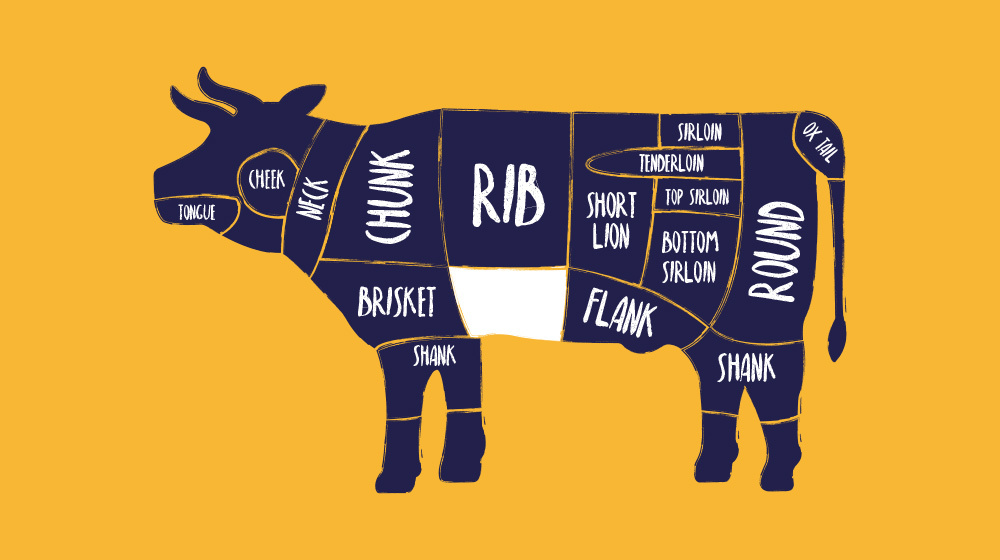 The beef plate primal cut includes the short ribs, as well as the skirt steak. Beef short ribs have a lot of cartilage,  so are also good cuts to slow cook and braise. The skirt steak is the diaphragm muscle and is very flavourful, but must be trimmed of all connective tissue. It is very thin, so is perfect for quick dry-heat cooking.

Top tip: Always remember to cut against the grain when carving a skirt steak, as it has a lot of muscle fibres and, if cut along the grain, will be very chewy. 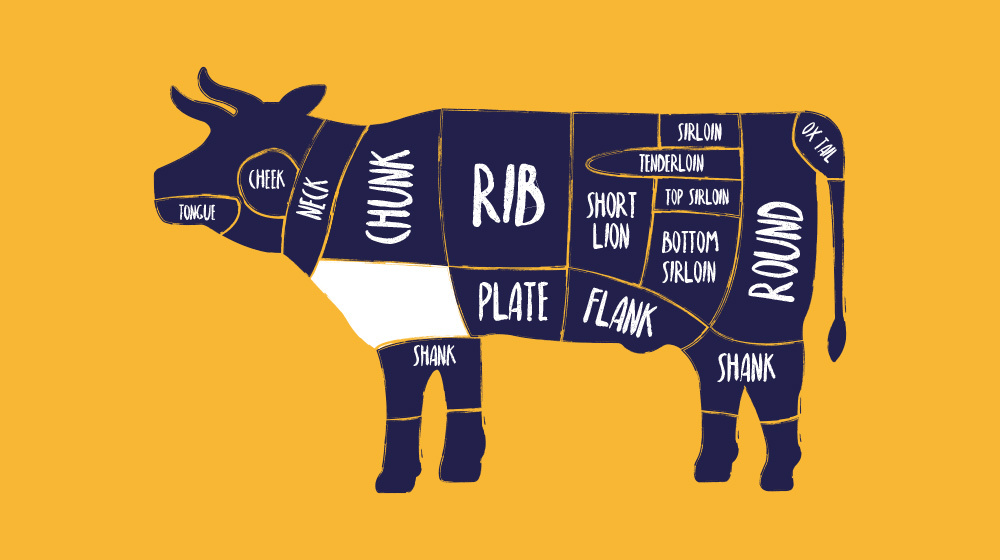 Brisket is the chest, or pectoral muscle of the animal. It is extremely flavourful but must be cooked down very slowly to tenderise the meat. It’s moderately fatty, but when slow-cooked, becomes very juicy and succulent. It’s often used for corned beef or smoked and used in sandwiches.

Try this recipe with brisket… Beef Brisket on Rye 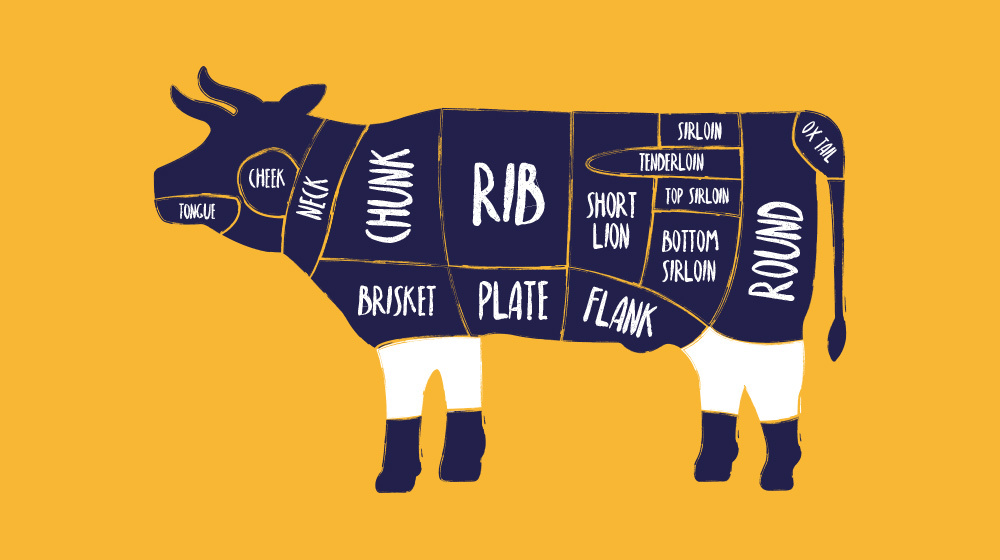 One of the toughest parts of the cow, the beef shank is the animal’s thigh muscle. It’s also referred to as beef shin. It needs to be cooked down very slowly to ensure it tenderises, but is delicious when properly prepared. 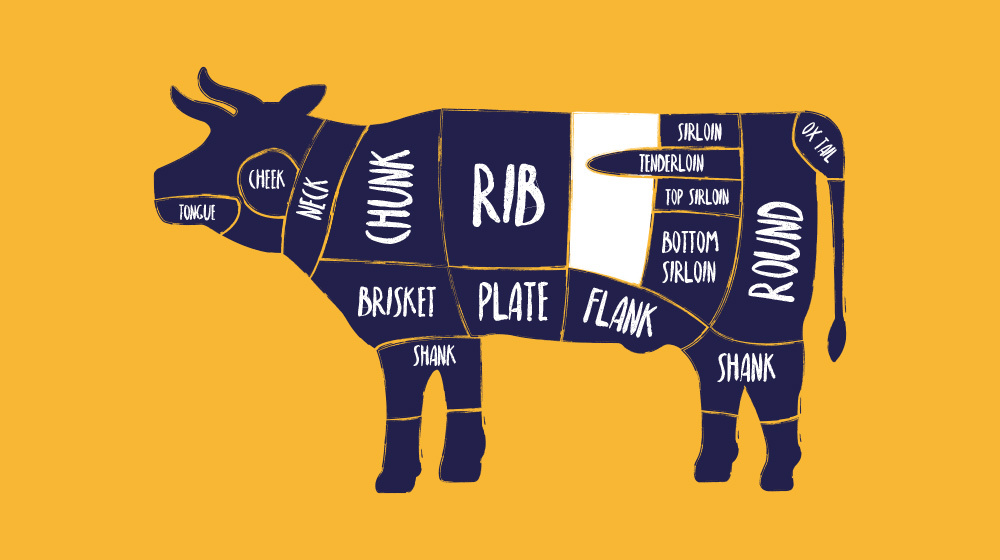 The beef short loin is part of the hindquarter of the cow and this is where you’ll find the more expensive, desirable parts of the animal. Cuts like porterhouse, T-bone, strip loin and strip steak are all part of the short loin primal cut. 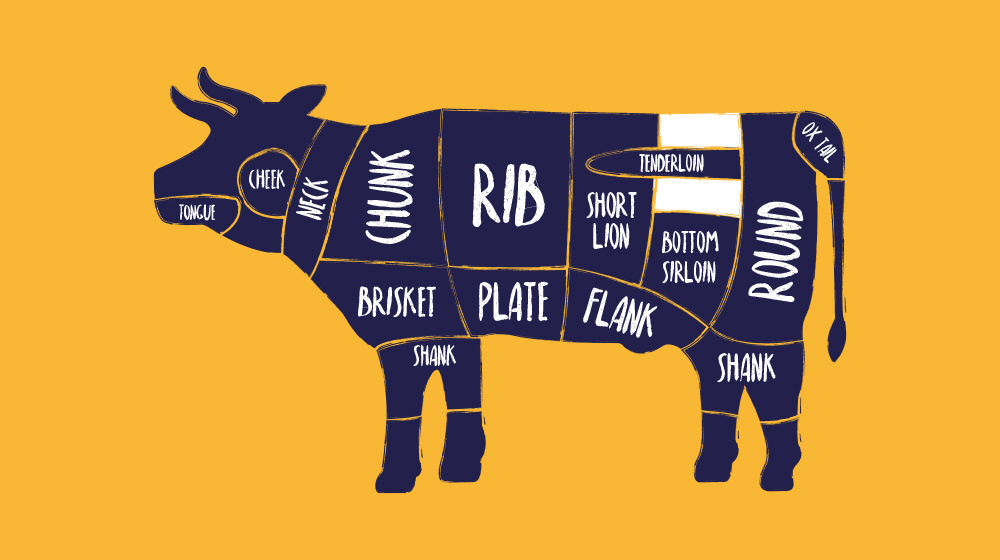 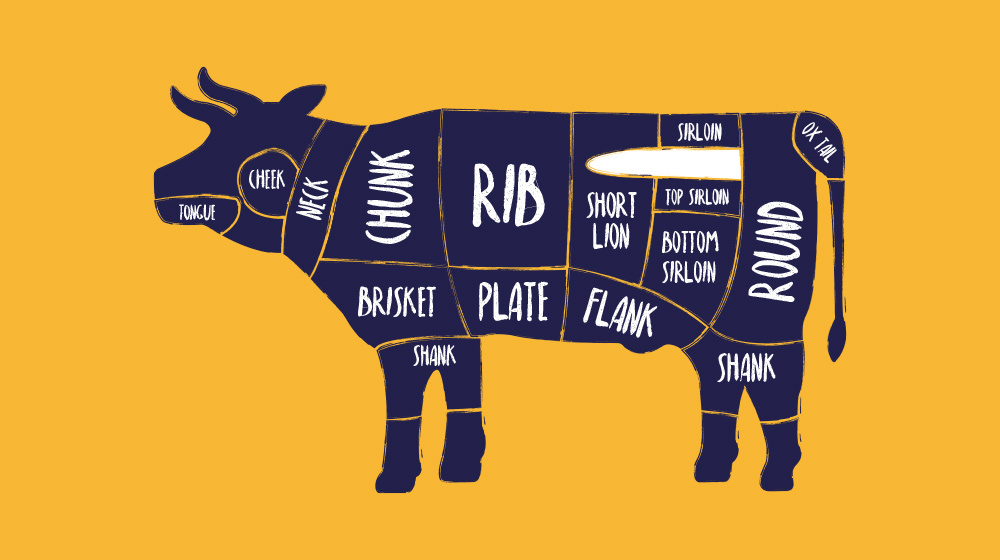 The beef tenderloin is the most tender part of the animal and is where fillet mignon comes from, as well as Chateaubriand steak. Many butchers will remove the whole tenderloin and sell it as one roast or individual steaks. It’s already very tender, so quick cooking methods like grilling are best. 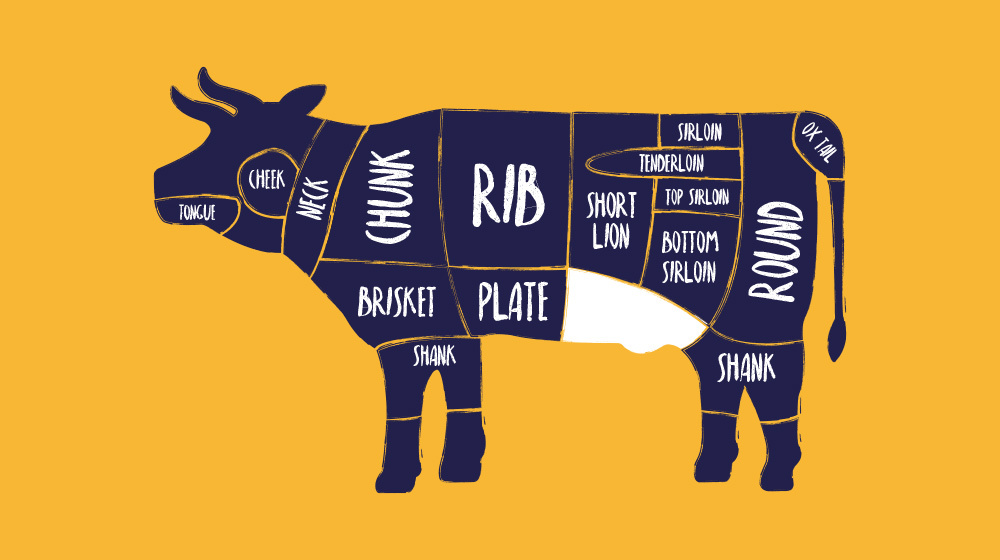 The flank is the underside of the cow and, like the skirt steak, has tough muscle fibres so it needs to be cooked quickly and cut correctly. It’s quite a lean cut of meat, but still very flavourful if cooked properly. 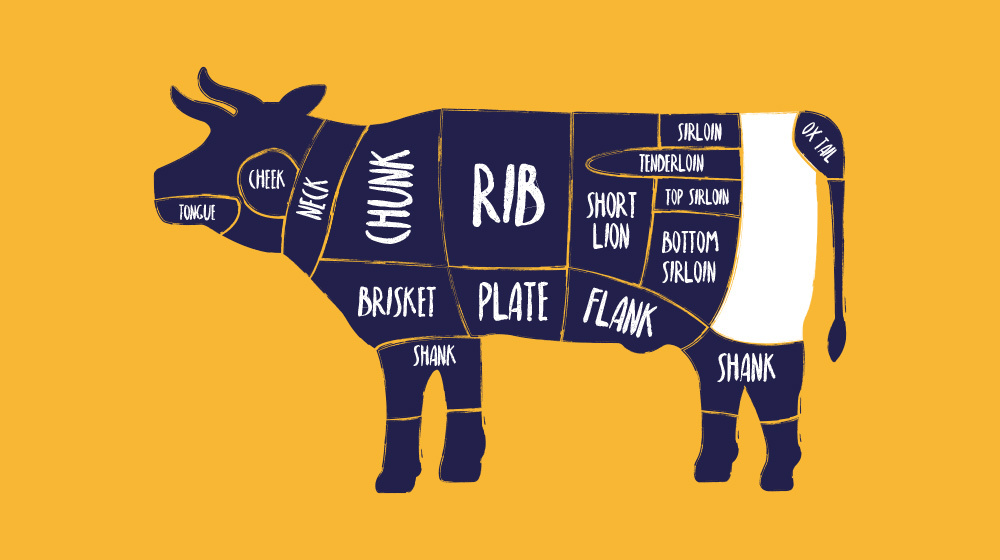 The beef round is a large primal cut containing the rump and rear leg of the cow. Like the sirloin, it is divided into sections, the top round, bottom round and the knuckle.

The meat from the beef round is very lean, therefore is best roasted and sliced thinly. It’s a good option for roast beef sandwiches. It’s also delicious when braised and cooked in a stew.